It was a night of ghouls, gore and glamour. 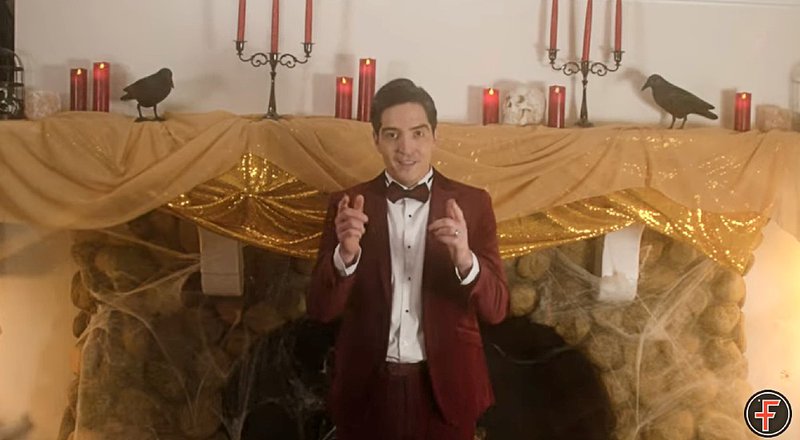 Things sure have changed since the early to mid-1990s, when the FANGORIA Chainsaw Awards were live events witnessed only by those who attended our Los Angeles Weekend of Horrors conventions. Now the Chainsaws have gone digital, premiering on Shudder last night to a much wider audience. And while the ’90s were a relatively fallow period for fear fare – when we occasionally had to struggle to find five worthy nominees for certain categories – 2020 saw a remarkable array of fine features released, with 26 different films worthy of nomination in our assorted Best Movie slots. Real life might have been pretty scary last year, but there was a wealth of fictional fright to experience for escape and catharsis, and the Chainsaws gave our readers a chance to honor the best of the best. 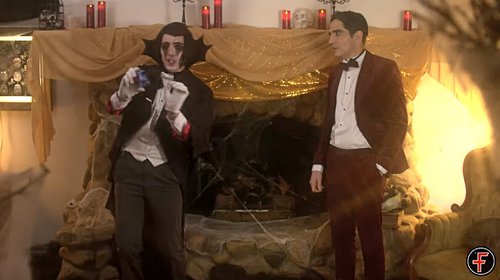 The host this year was actor David Dastmalchian, a man with plenty of experience in fantastical cinema and TV: Gotham, The Flash, the Ant-Man movies, with The Suicide Squad and Dune coming up. A strange vampiric character calling himself Dr. Fearless and bearing something of a resemblance to Dastmalchian actually opened the show by intruding on a scene from the Shudder hit Host, but the actor got things sorted out and was soon introducing the first presenter, The Thing and Pitch Black veteran Keith David. 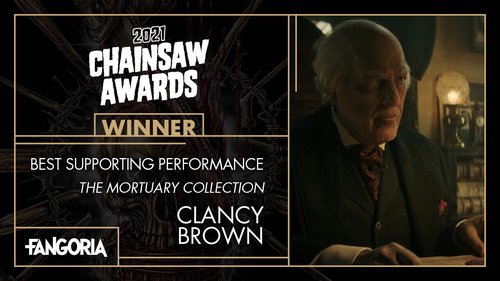 From a list of Best Supporting Performance nominees that included many respected veterans and new favorites, the winner was The Mortuary Collection’s Clancy Brown, who (accepting on video, like the other victors) briefly slipped into his Montgomery Dark voice before thanking Mortuary writer/director Ryan Spindell, “who was dumb enough to get fooled into casting me, but smart enough to use me well,” and expressed the hope – no doubt shared by the movie’s many fans – that Mr. Dark will be resurrected for a follow-up film. 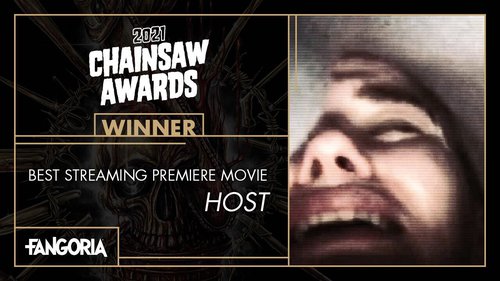 Up next were Rue Morgue editor Andrea Subissati and her little dog Dante of the Dead, presenting Best Streaming Premiere Movie. Competition in this category was so fierce that six instead of the usual five films were in the running, and the chilling “desktop movie” Host came out on top. Echoing their flick’s visual scheme, accepting filmmakers Rob Savage and Douglas Cox were quickly joined on screen by a number of their collaborators, who popped up in individual windows to toast their victory. 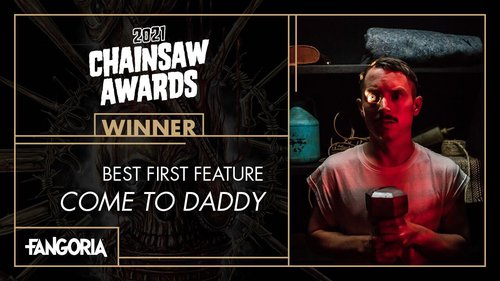 The found-footage homage continued as filmmaker Travis Stevens, presenting Best First Feature (which he won last year for Girl on the Third Floor), appeared to be hiding from some unseen threat under his car in his garage, illuminated only by a lighter. He was nonetheless able to read the nominees and then the winner, Come to Daddy, whose director Ant Timpson noted, “Rex Reed called it the worst film of 2020, so I want to dedicate this award to Rex Reed, and everyone who voted for the film.” 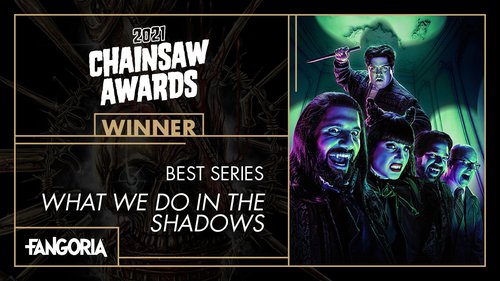 Filmmaker/blogger Gory Cory then took the screen to announce Best Series, which went to the beloved mockumentary What We Do in the Shadows, accepted by Doug Jones, who played Baron Afanas on the show. 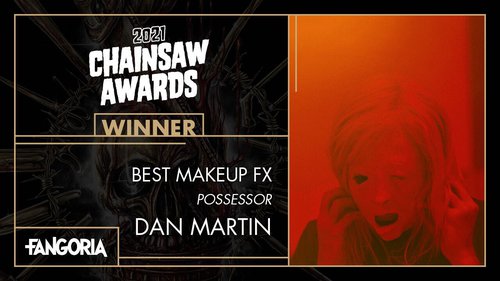 Returning to reveal that he had initially aspired to be an effects artist, Dastmalchian then introduced Dragula star Biqtch Puddin, who – with the help of some satanic graphics and Peanuts-style offscreen voices – presented Best Makeup FX. Possessor’s Dan Martin nailed this one, and had the names of his entire team displayed on a whiteboard behind him in his acceptance video. 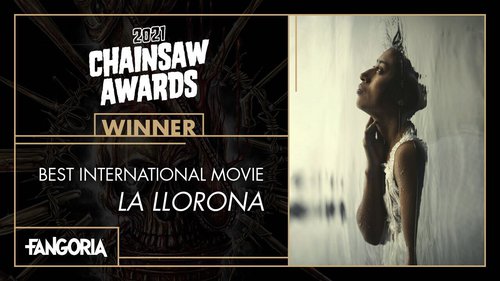 “If you’re scared of subtitles, it’s time to face your fears,” began the next presenter, Tigers Are Not Afraid filmmaker Issa López (another past winner), in subtitled Spanish as she revealed Best International Movie. Another film in her native tongue, the Guatemalan La Llorona, triumphed here, with director Jayro Bustamante thanking his collaborators and “all the people who made the film become a reality, even with all the obstacles that means in a country like mine to make a film talking about the war and genocide that we lived.” 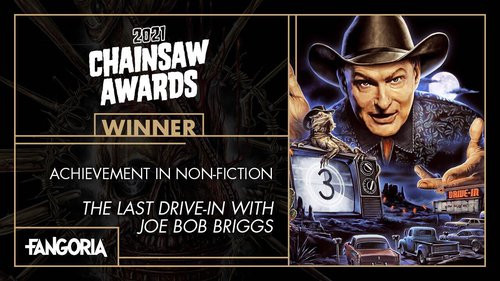 Fango itself was repped by the next pair of presenters, Phil Nobile Jr. and Rebekah McKendry, who teamed up to announce the very first Achievement in Non-Fiction award. In another strong category, The Last Drive-In with Joe Bob Briggs took the honor, and Joe Bob himself quipped, “Darcy the Mail Girl should be here accepting this, because after all, she was the one who rigged the voting machines… I mean, she’s the one who conducted the voting campaign.” 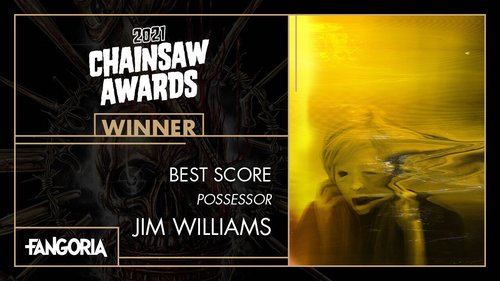 Emmanuel Osei-Kuffour Jr., director of the standout Welcome to the Blumhouse entry Black Box, next appeared to present Best Score, which went to Possessor’s Jim Williams. Apparently, Williams was unavailable, as Dr. Fearless gave a campy acceptance speech in his stead. 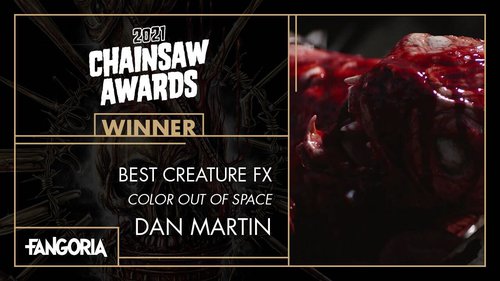 Then Jones returned to present Best Creature FX, telling the audience “Behind every great horror creature” – of which he’s played many – “is a great human creature creator.” The greatest last year, as voted by our readers, was Color Out of Space’s Dan Martin, making it two for two for the night and once again listing his whole team on the whiteboard. 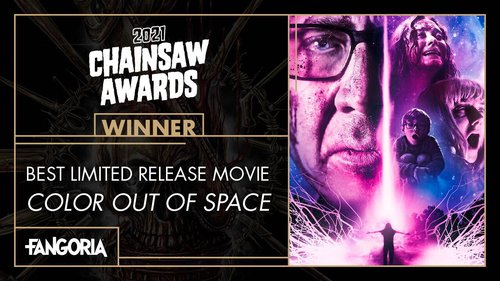 “This is like the Train to Busan of awards shows,” Dastmalchian said when he returned on camera, and indeed, the Chainsaws were maintaining a furious pace. It was just the right time for a musical interlude, as “post-Goth Dadastep gay piano demon” Smiling Beth appeared in a video for her song “A Piano Walks Home Alone at Night.” After a quick Dr. Fearless bit, the scene then switched to the Fango-strewn workshop of filmmaker Corin Hardy (The Nun), presenting Best Limited Release Movie. The winner was Color Out of Space, and Dastmalchian accepted on behalf of production company SpectreVision. 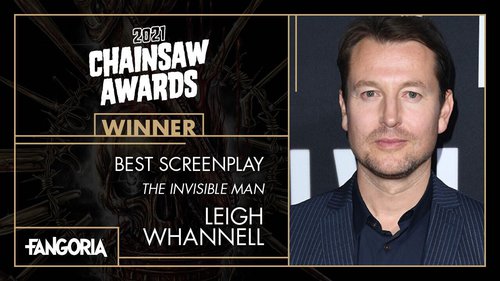 Announcing Best Screenplay was author Tananarive Due, who intoned, “Writers are creatures of the night. They dwell in the shadows, isolated, conjuring our worst nightmares and fantasies from the depths of their brain-caves,” before revealing The Invisible Man’s Leigh Whannell as the readers’ choice. Speaking from “the very room where The Invisible Man was written,” Whannell thanked the production team behind the movie, and especially “a person that I called my co-writer on the set of the film, Elisabeth Moss.” 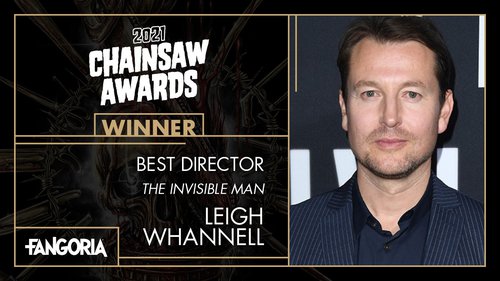 Whannell was sitting behind a nameplate reading, “I’m Kind of a Big Deal,” and Fangorians agreed, as The Invisible Man swept the major Chainsaws. He was back shortly after Kevin Smith divulged that he had also taken Best Director, and Whannell thanked the readers “for this incredible honor… It’s especially incredible given the company I’m in.” 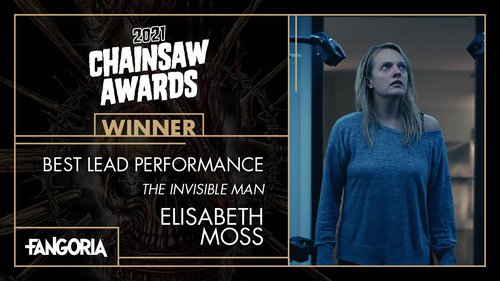 None other than Jamie Lee Curtis followed to present Best Lead Performance, standing in her shower in homage to her mom, Janet Leigh, and making an inclusionary statement: “I’m a little concerned that it’s only chainsaws getting the attention. What about knives, razor blades… what about a good pickaxe? Really?” Invisible Man’s Elisabeth Moss triumphed, and producer Jason Blum accepted for her, calling his star “amazing” and “just spectacular in the movie.” 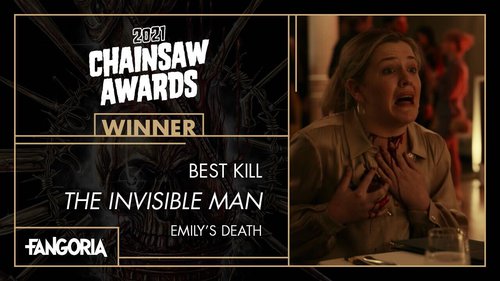 Equally spectacular, according to our readers, was Invisible Man’s startling restaurant scene, which was the readers’ write-in choice for Best Kill, announced by the new Michael Myers himself, James Jude Courtney. “In films, I’ve killed a lot of people,” said the accepting Whannell, “but the kill in The Invisible Man in the restaurant was one that I was really proud of, that we had to get right. When you’re sitting in a theater and you hear a bunch of people screaming in unison, that’s just the best feeling in the world, whether you’re the filmmaker or an audience member.” 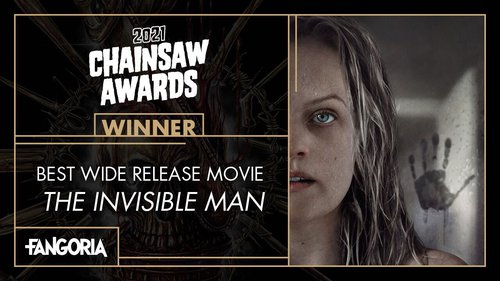 Everyone has their own favorites, of course: “I’m still partial to the exploding penis in The Mortuary Collection,” said Dastmalchian before introducing “visionary filmmaker” Gigi Saul Guerrero. She enthusiastically read the nominees for Best Wide Release Movie before disclosing the top prize had been won by “El Hombre Invisible.” “I wanted to make an official announcement that I have lost my mind. I cannot take another day of quarantine,” said Blum, holding some random objects as he accepted the award. “Hopefully, there will be more wide releases soon.” We can only agree, and look forward to honoring them in the 2022 Chainsaw Awards!

Editor's Note: now that Mike has whetted your appetite for an outrageously fun evening, you can watch the entire 2021 FANGORIA Chainsaw Awards below!

Watch This Exclusive Clip From THE GREEN KNIGHT