Cast Interview: Together Apart In THE MIST 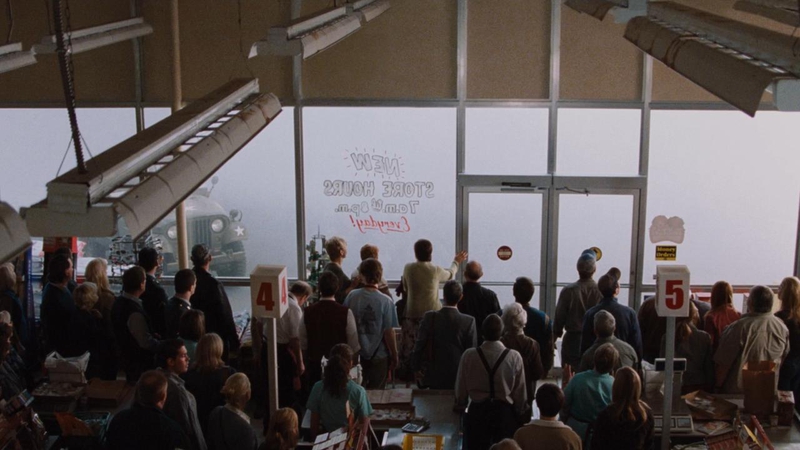 Editor's Note: This was originally published for FANGORIA on November 25, 2007, and we're proud to share it as part of The Gingold Files.

The crux of the drama in The Mist, the Stephen King chiller currently in release from Dimension, is that its large ensemble of characters trapped in a supermarket by grotesque creatures are as threatened by their own differences as they are by the creatures. But if there’s one thing the actors who play them can agree on, it is that this element of interpersonal conflict is both realistic and topical in a way that sets Frank Darabont’s film apart from typical horror fare.

For Laurie Holden, making her second appearance in a Darabont film after 2001’s The Majestic, the movie’s central struggle of rationalism vs. religion was reminiscent of another of her genre credits, Christophe Gans’ video-game adaptation Silent Hill. “I play a very different character in this one,” she says of schoolteacher Amanda Dumfries, “but I do find there is a similarity in the theme of faith vs. truth. The people who really have faith are myself and [the heroic father played by] Thomas Jane; we’re fighting to survive. We’re fighting for the best result and the best outcome and for civilization, while the people who supposedly have the faith, Mrs. Carmody and her followers, are doing the most atrocious things in the name of God, which is very similar to Silent Hill: using God as an excuse, as a device to hide from their fear.”

The devout Mrs. Carmody believes the hideous threat represents God visiting His judgment upon humanity, and leads a growing—and increasingly hostile—group of acolytes who come to physically threaten anyone who stands against them. For Marcia Gay Harden, the Oscar-winning actress who plays the role, “The Bible speech didn’t strike a chord in me; the most interesting part was the Lord of the Flies element. What do human beings do? What would I do? And I don’t know that I would be so noble. You would think you would, but if there are bugs outside that window or dinosaurs grabbing you and eating your head off? Then I would think it was the end of the world. If I was in that store, would I hoard a little something? I’m sure I would. Because I shove myself in the subway to get a seat sometimes. I push myself to get there first. Do I believe I’d ultimately be community-minded? Like we were in this together? I only hope so.”

Toby Jones, the British actor who plays store manager Ollie Weeks, adds that addressing these questions makes the film universal. While he muses that the conflict would have a slightly different emotional volume were it to take place in England (“Maybe they’d stay quieter”), he notes, “This film is archetypal; it’s not just about America. There are certain issues about this country you could point out, like the religious fundamentalism or whatever, but I believe it's archetypal in the sense that when one is stuck on a train, you begin to feel this rhythm of people responding. One person mouthing off, another person saying, ‘Shut up,’ another saying, ‘Can we just calm down?’, another person reading… You begin to understand that a group of people responds, all over the world, in a very similar way.”

To place the audience right in the midst of the unfolding drama, Darabont and cinematographer Rohn Schmidt lensed The Mist largely with handheld cameras—a pair of them. This enabled the filmmakers to capture any spontaneous acting beats or moments among the cast, which in turn both humanized and added edge to the proceedings. For Holden, “It was night and day different” from her experience with the director on The Majestic. “That was very elegant and Kubrick-esque, and this was renegade, fly-by-the-seat-of-your-pants, never-knew-where-the-cameras-were [filmmaking]. You had to be on all the time. It kind of felt like live theater in many ways. The beauty of this was that he cast so many great actors, and everybody fed off each other and fueled one another. Every time you did a take, you’d catch one actor’s eye and another actor’s eye, and it would be a little different every time, and you trusted that Frank and the editor would choose which moment they liked. It was really like a live performance that we all had to be in the moment for. It really helped make the film very raw and visceral.”

Andre Braugher, who plays disbelieving lawyer Brent Norton—a quieter opposing force to Jane’s David Drayton than Mrs. Carmody—had experience with this type of production from his five-year stint on TV’s Homicide. “This wasn’t the stately kind of formal filming in which you could delay your close-up until the afternoon and really get it together,” he notes. “It was gonna be as dangerous and uncertain in the master as it was in the close-up. So like on Homicide, you just had to be ready. We had marks so we could find focus—you always want to be in focus—but we weren’t married to them, because there was a lot of panic and confusion going on, and you were going to wind up 2 feet off your mark when you were scuffling around or batting down birds with flaming mops.”

Dealing with The Mist’s CG creatures was a whole new experience for Jones, whose background is in theater and smaller features like Infamous, in which he played Truman Capote, and Mrs. Henderson Presents (though he did voice the computer-generated Dobby the House Elf in Harry Potter and the Chamber of Secrets). “The special effects people were amazing,” he says. “They worked very, very fast, and they were very low-maintenance. They didn’t need lots of time; they just needed to make a few reference points. They’d give you a puppet and the scale of where you were supposed to look; you were provided very careful eyelines and stuff like that. It was really impressive, the way that didn’t interrupt the process. Although it’s amazing—in a play you can rehearse a 20-minute sequence once and remember everything, but if you’re doing a special-effects scene, you find yourself not being able to remember tiny little details of movement because you’re working on such a microscopic scale.”

Having those monster mockups on hand was an advantage that Holden says she didn’t always have on her previous fright film. “The Red Pyramid was there on Silent Hill, so we always had that as a reference point, and the giant knife was there—frighteningly so, when Radha [Mitchell] and I were dodging it. But other than that, there was no reference to anything. It was, ‘You see the darkness coming,’ ‘You see this monster coming,’ and it was all our imaginations. On The Mist, the special effects guys came on set, showed us models. The animators demonstrated how every single creature moved—their teeth, their tails, their wings, what color they were, the hair—with such detail that it gave us a wonderful point of reference when we had to look at an X on the window or a tennis ball on a stick. We all knew exactly what we were looking at, which was very helpful.”

For 9-year-old Nathan Gamble, who plays David’s son Billy, the way into the extreme emotions he performs in The Mist was simple. “I just thought, ‘OK, let’s get some tears out,’ ” he says. “I would say to myself, ‘If this was real, and my dad had to get to the pharmacy and I had to stay here…’ and I would be crying just like Billy. This was the second time I had to act scared, and I had to show a bunch of other emotions too. It’s the hardest thing I’ve ever done.”

The young actor, who will be seen next summer as Commissioner Gordon’s son in The Dark Knight, adds that Darabont helped make the challenging experience easier. “He’s quite a guy,” Gamble says. “He’s funny when you’re supposed to be funny and serious when he wants to be. He showed us the scene with the tentacles, and he was being hilarious in describing it.” Like the other actors, he recalls being shown models of The Mist’s killer critters (“Nathan got [to take home] a spider,” Holden reveals, “but I was told that his mother doesn’t know where to put it in the house, because it freaks out his siblings”), but Gamble notes that “I wasn’t that scared doing the movie, really. The only thing that scared me was Marcia!”

Somewhat more sympathetic in his view of the situation is Braugher’s doubting-Thomas character, whose outlook “seems to be contrary to the facts of the mist, but it’s a very reasonable one,” the actor notes. “The most rational understanding of the mist is that this is the end of the world as we know it, and we’re gonna die in this grocery store, but not many people want to accept that early on.” And as Braugher points out, “The audience knows more than I do. They’re in the loading dock [where the first monster attack takes place], so they know that they’re real. And so the gag’s on me.”

Throughout The Mist, it all comes down to human nature in its many variations, and how each individual responds to fear, or what Braugher describes as “the shrinking back from the unknown, like, ‘I gotta get out of this thing, I don’t know exactly what it is.’ I remember I stepped on one of the extras’ toes twice. She said, ‘Why are you stepping on my feet?’ I said, ‘You know, I really don’t want to be first, but I also don’t want to be last.’ So when the crowd surges toward the door, hey, I surge toward the door. And when they recoil from the door, I sort of recoil too, because I want to stay in the middle of the pack, you know what I mean?

“Part of that is just our nature, it’s our adrenalin working at the same moment,” he continues. “But you know, Brent is subject to that too. If he was sitting in a boardroom hammering out the details, and there was one Type A personality against another, I think I’d come out on top. But when you’re talking about something going on in a supermarket, well, hey, that’s not my domain. I can’t get my chainsaw to work, let alone take on the big, bad monsters. You know, I rule in a realm that has been destroyed by the mist. There’s no need for lawyers anymore.”