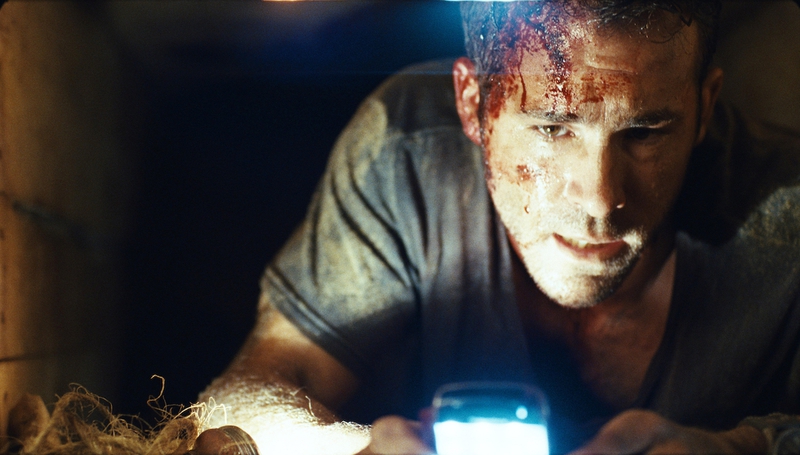 Editor's Note: This was originally published for FANGORIA on September 22, 2010, and we're proud to share it as part of The Gingold Files.

Buried can’t necessarily be classified as a straight horror film, but it’s likely that you won’t have a more harrowing experience in a movie theater this year. At the screening I attended, the end credits were greeted with the loudest tension-relieving sighs I’ve heard since The Blair Witch Project.

Conceptually, Buried is built on a premise just as simple and even more fiendishly economical than Blair Witch’s: The entire running time is spent inside a coffin with a man who’s been interred alive. This man is Paul Conroy (Ryan Reynolds), who awakens tied up in total darkness—which means we hear his desperation before we see it. Thumps, scratches, gasps emanate from a black screen as the movie begins…and then Paul finds a lighter and flicks it on, and we become aware of the details of his predicament only as he does. There are no explanatory subtitles or flashbacks explaining how he got there; those details are revealed through conversations he has on a cell phone (not his own) he finds on his person. We soon learn that he has been kidnapped in Iraq by insurgents, and that he’s not a soldier, but simply a relief worker who was driving a supply truck when the convoy was ambushed.

The movie wrings black-humored tension from Paul’s initially frustrated attempts to call for help, reaching only voice messages and dispassionate operators, all while his wife Linda remains maddeningly unreachable. It’s just one of the notes of cruel irony in Chris Sparling’s ingenious screenplay that the very technology that makes it possible for him to reach the outside world is also what allows his captors to confine him this way: They want him to shoot a ransom video on the phone’s camera and send it to them so that it can be broadcast to the American authorities. Two opposing representatives become Paul’s key contacts: Dan Brenner (voiced by Robert Paterson) from the State Department’s Hostage Working Group who tries to keep Paul calm and reassured, and the terrorist Jabir (Jose Luis Garcia-Perez), who is implacable in his demands that only “five million money” will get Paul set free.

Consistently clever in the way it drops hints and suggestions about Paul’s life and relationships, Sparling’s script also keeps the dramatic situations varied even under such limited circumstances. (Only one portion, involving a visitor to Paul’s coffin, feels rather contrived.) Buried proceeds as a well-paced series of alternations between Paul’s frantic conversations with the unseen supporting characters and stretches where, totally alone, he runs a gamut of emotions in response to his predicament. Reynolds, demonstrating range and ability far beyond anything he’s done before, proves to be perfect casting for the role. He’s not built like an action hero, and indeed Paul isn’t one; not a soldier, he’s simply a Midwestern working man trying to provide for his family, caught up in the very worst part of a conflict he’s not directly involved with, which makes his circumstances all the more unnerving. (Not to mention that everything else about the film feels so authentic and well-researched, one gets the chilling suspicion the filmmakers learned that this sort of thing happens more often than the general public is aware of.)

Faced by this material with any number of storytelling and technical challenges, director Rodrigo Cortes comes through admirably, eliciting an escalating claustrophobia (even while shooting in widescreen) while keeping things from bogging down visually. He and cinematographer Eduard Grau consistently vary their angles for maximum emotional impact, and even (thanks to different lighting sources left for Paul in his box) employ a fairly wide-ranging color palette. Add the extremely well-deployed sound design by James Munoz, and you’ve got a movie that traps you in that coffin right along with Paul, wondering who he can trust, how long his air will last…and if he’ll ultimately make it out alive.

Buried may not trade in the traditional shocks and jolts of the horror genre, but it mercilessly tightens the suspense screws in its second half, throwing in unexpected curveballs that add new layers of tension and desperation. With one or two exceptions, it’s all done with a minimum of exaggeration, and Cortes and Sparling exhibit such control over the material that toward the end, a simple three-word line of dialogue is enough to put the story into shocking new relief. By this point, you may no longer by worried about Paul and instead be wondering if Buried is going to let you go.