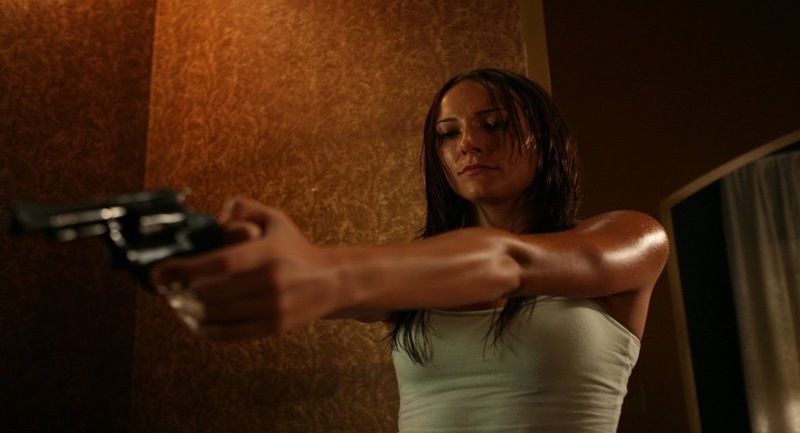 Editor's Note: This was originally published for FANGORIA on August 27, 2010, and we're proud to share it as part of The Gingold Files.

Actress Briana Evigan has been all over the fright genre in the last couple of years, yet she has managed not to do the same kind of horror story twice. She faced zombies in Fear Itself’s New Years Day episode, a slasher in Sorority Row and the surreal genre-blending of S. Darko, with the home-invasion shocks of Darren Lynn Bousman’s Mother’s Day coming up next. And then there’s Lionsgate’s DVD release of Burning Bright, an animal-attack entry in which Evigan shares the screen with a very hungry tiger.

Actually, as the disc’s featurette reveals and Evigan explains, it only looks like she and the big cat have scenes together. “I never actually worked with the tiger,” Evigan says. “I basically got to break down an entire house that they built for me, and did some greenscreen work, but mainly I worked on those sets with nothing, which was cool, because I had to pretend that all this was happening to me.”

Burning Bright casts Evigan as Kelly, a college-age girl caring for her autistic preteen brother Tom (Charlie Tahan) and dealing with a ne’er-do-well stepfather (The Last House on the Left’s Garret Dillahunt). He has sunk every penny he—and Kelly—have into a planned safari attraction, and purchased a tiger with an especially violent history as its centerpiece. When a hurricane bears down on the area, Kelly and Tom wind up trapped in their boarded-up house with the vicious feline—portrayed by a number of trained Bengal tigers that were composited into footage with their human co-stars.

“I did meet the tigers” during the shoot on Universal’s Orlando lot, Evigan recalls, “and I spoke with the trainers a lot. They had these wires that went through the house, and they put meat on them and shot it across the rooms, and the tigers would just launch after it. Apparently, meat is the way to get a tiger to do anything [laughs]. If I wasn’t in the picture, you’d see it attacking a big piece of steak. There were a lot of tricks like that that the trainers had been working on, but I could never work with them. If a tiger saw a person acting the way I was, running and banging and screaming, it would probably sense all that fear and freak out.

“There was a real hurricane that came through Florida,” she continues, “so I went home for five days while they shot a lot of the tiger work. I got to watch it when I came back, which really helped, to see what I was supposed to be running from. It’s like they filmed two movies—one with me and one with the tigers.”

She was able to work more closely with Tahan, and recalls the experience warmly. “He was 11 when we were shooting, I believe, but he was so grown-up and mature and smart, and really into his art. He looked up tapes on autism, really did his research and did a killer job. My cousin is actually autistic, and it was interesting to see the same behaviors. I mean, every kid who’s autistic is very different; they don’t have the same symptoms. But they’re some of the smartest people ever; my cousin would read dictionaries and has a bigger vocabulary than I’ll ever have. He’s so smart, and I feel like Charlie really nailed that.”

Burning Bright director Carlos Brooks also wins Evigan’s seal of approval, in part because he and producer David Higgins responded to her initial misgivings about the script. While she enjoyed the concept, she felt that Kelly, on paper, wasn’t an especially strong character, and during a trip home to Hollywood in the midst of the S. Darko shoot (to attend the MTV Movie Awards, where she and Robert Hoffman won Best Kiss for Step Up 2 the Streets), she met with the duo to discuss it. “I just felt that if you didn’t care about Kelly, why would you care if she survived? I needed people to love her, and that’s where the changes came in. We made Kelly more likable, and gave her a lot more personality than I’d seen when I first read it. We built her up so much that now, she’s my favorite character I’ve played.”

And she does a bang-up job in the film—literally, in a number of the action setpieces, though she reports that she never really got hurt while making Burning Bright. “I did get some pretty bad burns in my armpits for some of the harness work I did in the laundry chute,” she says. “They had these really thin wires underneath my arms when I would climb, and when I would do a quick jump or held on for too long, it would burn me. So I got all that new skin-care stuff, all of which worked wonderfully.”

On the other hand, shooting S. Darko, the sequel to the cult sensation Donnie Darko, took something of an emotional toll on the actress. “That was an interesting project—very depressing, actually. Probably because of the movie’s tone; it’s just so slow and weird, and that took off on the set—it had a strange vibe. Chris Fisher was a great director and everyone did a killer job, and I did enjoy my character. She’s kind of a ’90s bad-ass punk, not very nice to people, and I never get to play that, so it was cool.”

Much more fun was Sorority Row, the remake of 1982’s The House on Sorority Row in which Evigan portrays the most sympathetic among a group of “sisters” who are involved in the accidental death of one of their own, and face the murderous vengeance of a mysterious killer eight months later. The actress recalls that she and her co-stars formed a sorority of their own: “We had slumber parties in our hotel rooms, we went to bars, salsa dancing—we couldn’t have gotten along better. Some of those girls are my best friends.” And like Burning Bright, the film gave her the chance to get physical, particularly during the fiery climax. “I got to do a lot of work with the stunt folks, and had fun with that. Learning how to knock someone out and make it look good, how to take a fall well, how to do all the fire work with the gel they put all over you—it was crazy.”

One thing she didn’t get to play with, as one of Sorority Row’s survivors, was the makeup FX involved in some of the other girls’ demises. “That would’ve been fun, but I like being alive at the end of the movie,” Evigan says. “It’s cool to be the hero. I’m sure one of these days I’ll get an awesome death sequence in something.”

The actress didn’t watch the original Sorority Row before taking part in the redux (“All the girls and I said we’d watch it after the new one came out, but we haven’t gotten around to it yet”), and the same goes for Mother’s Day, a reboot of Charles Kaufman’s low-budget 1980 gorefest. Bousman and screenwriter Scott Milam’s update alters the story considerably, retaining only the concept of a twisted matriarch (played by Rebecca De Mornay) and her nasty grown children terrorizing a group of innocents.

“I play Annette, the tough, strong one of the group who are captured and held hostage in a basement,” Evigan says. “It kind of becomes every person for themselves. At first you think she’s very selfish, borderline slutty—though I don’t like to call her a slut—but when things start getting bad, she takes charge. She’s kind of a sad soul who turns into a really bright and strong one.”

Nonetheless, Annette is the victim in one of Mother’s Day’s most disturbing moments. “I have this scene, an almost-rape,” Evigan explains, “and the sickest part is that the mother is making me do it, so it’s really creepy. That whole scene was pretty crazy, and I had to go to a place I’ve never been, and it made me really uncomfortable. But I got through it, and then we made a comedic thing out of it, and got this footage that will hopefully go on the blooper reel. We changed the music to ‘I Want You to Want Me’ and everyone started dancing, with me half-naked and the mother spanking her kids—it was twisted and hilarious. I think everyone did it because they knew how uncomfortable it was for me to do this horrific scene over and over and over again.”

Evigan also credits Bousman with making the filming of the setpiece as painless as possible. “It was a closed set, and everyone was very professional and respectful, and understood that it’s not easy to do a scene like that. Darren’s great—this was my second job with him after Fear Itself, and we’re really good buddies. I’ll always work for him if he calls me.”

In New Years Day, Evigan stars as a young woman who wakes up hung over from a party, and discovers that the world has been overrun by the living dead. “That was awesome, getting to fight zombies,” she raves. “Edmonton, Canada isn’t one of my favorite places, but luckily I was only there for two weeks, so it wasn’t so bad. I got to work with Niall Matter, who was really cool, and Zulay Henao, and Darren, who’s just a fantastic director. He’s got this stylistic approach that makes it so interesting to watch him work.”

The daughter of actor Greg Evigan, Briana made her film debut opposite her father in House of the Damned, a 1996 Roger Corman production shot in Ireland. “I played a little girl who’s taken away and possessed by demons and my parents have to come save me, and once they do, my mom becomes possessed. She was played by Alexandra Paul from Baywatch, which was cool, and so was acting with my dad. It’s funny, though—even though he’s an actor, to this day I still can’t practice in front of him. I can ask him a million questions, but I can’t show him anything that’s not finished.”

With a small role as an evil cheerleader in Danny Cistone’s upcoming horror/comedy Monster Heroes also in the can, the genre would seem to be in Evigan’s blood, but she admits that she’d like to take a break from it for a while, and move in other directions. “It’s not the only thing I want to do, though it is working for me right now. I would much prefer a really cool action film, maybe an action-thriller. I just don’t want to get stuck in one particular genre.”