The Horrors Of Relocation In BOYS FROM COUNTY HELL

Take away the vampires and gallows humor, and Chris Baugh’s film has something to say. 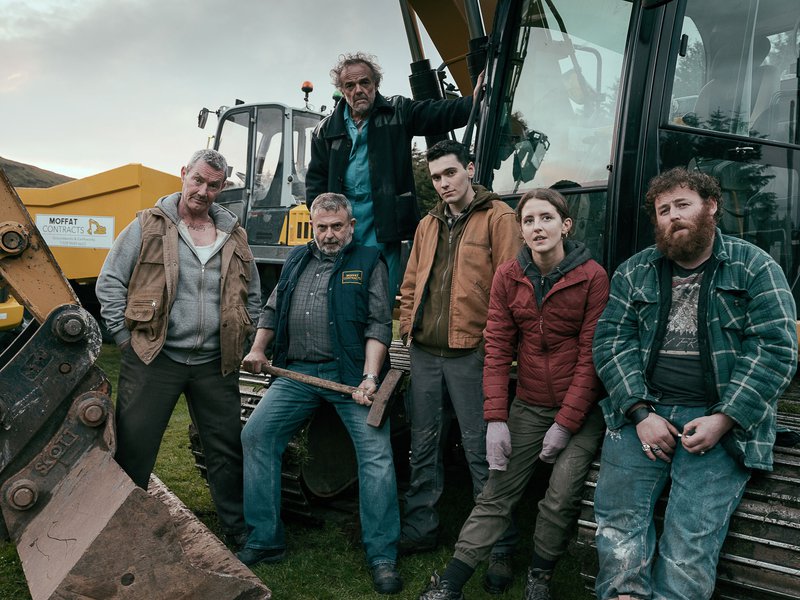 Progress sounds sweet on paper, but in practice tends to come at a cost. Take the town of Six Mile Hill, where naught happens, naught changes, and the only landmark worth visiting is a stone heap in a field. The heap isn’t just any heap, though; it’s the grave of Abhartach, an ancient Irish vampire said to have inspired Bram Stoker’s Dracula. The story doesn't mean much to Francie Moffat (Nigel O’Neill), who takes a contract to make space for a new highway bypass, which means digging up the cairn and the field it rests on. Who cares if by consequence he wakes up a bloodthirsty monster hellbent on exsanguinating locals? Cars gotta drive. Modernity marches forward.

Chris Baugh’s Boys from County Hell borrows as much from Stoker as Shaun of the Dead, blending the dread of eldritch evil, the consumption of human viscera, comedy ranged between slapstick and gallows humor, and melancholic family affairs. “You Moffats are nothin’ but trouble,” says the barkeep of Six Mile Hill’s vampire-themed pub (imaginatively called The Stoker), speaking to young Eugene Moffat (Jack Rowan), Francie’s boy and Baugh’s protagonist. It’s the wake for Eugene’s friend, William (Fra Fee), recently deceased from a freak accident near Abhartach’s cairn. “Not only do you get William killed, but you’re doin’ a job that is going to ruin this town.” For all his performative grief at William’s demise, the barkeep may be more upset about the cairn’s imminent removal: “That’s one of the only fuckin’ reasons people come to this town.”

With that, he refuses to serve Eugene and his friend, SP (Michael Hough), which is just about the gravest insult a person can be dealt in Ireland. Granted, he’s not wrong. The Moffats’ meddling brings back Abhartach and does in fact come close to bringing the town to ruin; it bodes poorly for the town’s future when every single resident begins spontaneously bleeding from their eyes, ears and noses all at the same time. But even without rousing the monster, there remains something to be said about the destruction of the town’s cultural landmark. The cairn isn’t just a claim to fame. It’s a part of the community, too. Getting rid of it means diluting the community’s identity. The proposed bypass would pierce Six Mile Hill like a stake through a heart.

Who would suggest such a thing? Governments and city planners. Boys from County Hell makes direct but low-key statements about the ramifications infrastructural overreach has on rural centers, but prioritizes the Moffats’ father-son dynamic above social commentary. The bypass gives the film structure; Eugene’s strife with Francie gives it purpose. But the basis for Baugh’s basic plot conceit is well-rooted in history and truth rather than fiction. Frankly, the repercussions of the dig and the toppling of Abhartach’s cairn feel like an apt metaphor: as Abhartach drains Six Mile Hill of its life force, so do developments like the Kingston Bridge sap neighborhoods of their vitality. Forcing people out of their homes in the name of – here’s that word again – “progress” turns out not to be progressive at all.

Here in the United States, the concept of “redeeming” urban areas by tearing them down and replacing them with highways is an oldie but a goodie, too. The city planner Robert Moses famously displaced hundreds of thousands of poor New Yorkers from their homes, which were then built over with middle-class apartments; he introduced the idea of using federal money to erect highways to “revitalize” ailing city centers, with the true goal of eradicating slums and the people who live in them. The construction of I-81 in the late 1950s put that practice into effect around Syracuse, leading to the obliteration of Black neighborhoods cited as stains on the city’s image and reputation.

How does the genie go back in the bottle when the genie is a bridge bifurcating a once-united neighborhood, or worse, a drowned village? Consider Capel Celyn, located in northeastern Wales in the Afon Tryweryn valley: in 1960, Liverpool City Council brought a bill before Parliament to establish a water reservoir in Tryweryn, which required flooding parts of the valley, including Capel Celyn. Given that people lived there at the time, the suggestion seems insane. But the people fought the bill, miraculously lost, and the project went ahead in 1965. So it goes. (As of today the reservoir isn’t in use, so clearly that was money well spent.)

What’s fundamentally unsettling about forcibly depopulated communities like Capel Celyn, like Syracuse, like Derwent in Derbyshire, like Glasgow, isn’t the thought that elected officials can, and certainly have, unceremoniously boot people from their homes and replaced them with thruways and waterbodies (though confronting this awful reality is indeed unsettling). Boys From County Hell expresses grief at what gets left behind, or what gets lost, when newness paves over old spaces. Six Mile Hill isn’t just a nothing town in the middle of actual nowhere. It’s where Francie buried his wife, where Eugene’s made his friends; it’s home, no matter how far flung from contemporary civilization and rough around the edges it may be. Francie’s job doesn’t demand the town’s total upheaval, of course, but changing its character is enough of a change to mean something.

Maybe the bureaucrats, administrators, and government contractors have a point. Maybe a place like Six Mile Hill has so little going for it that a new bypass could only improve its prospects. But Thomas is more right, which the film proves out when Abhartach ultimately rises from his prison. The most silver of linings is that nobody affected by any such ill-conceived real-life projects had to fight a decrepit vampire because of them. Then again, most of us probably know how to handle vampires; recovering from government-sponsored “renewal” is considerably more complicated. In a choice between the two, maybe the folks of Capel Celyn and Syracuse would rather deal with Abhartach.