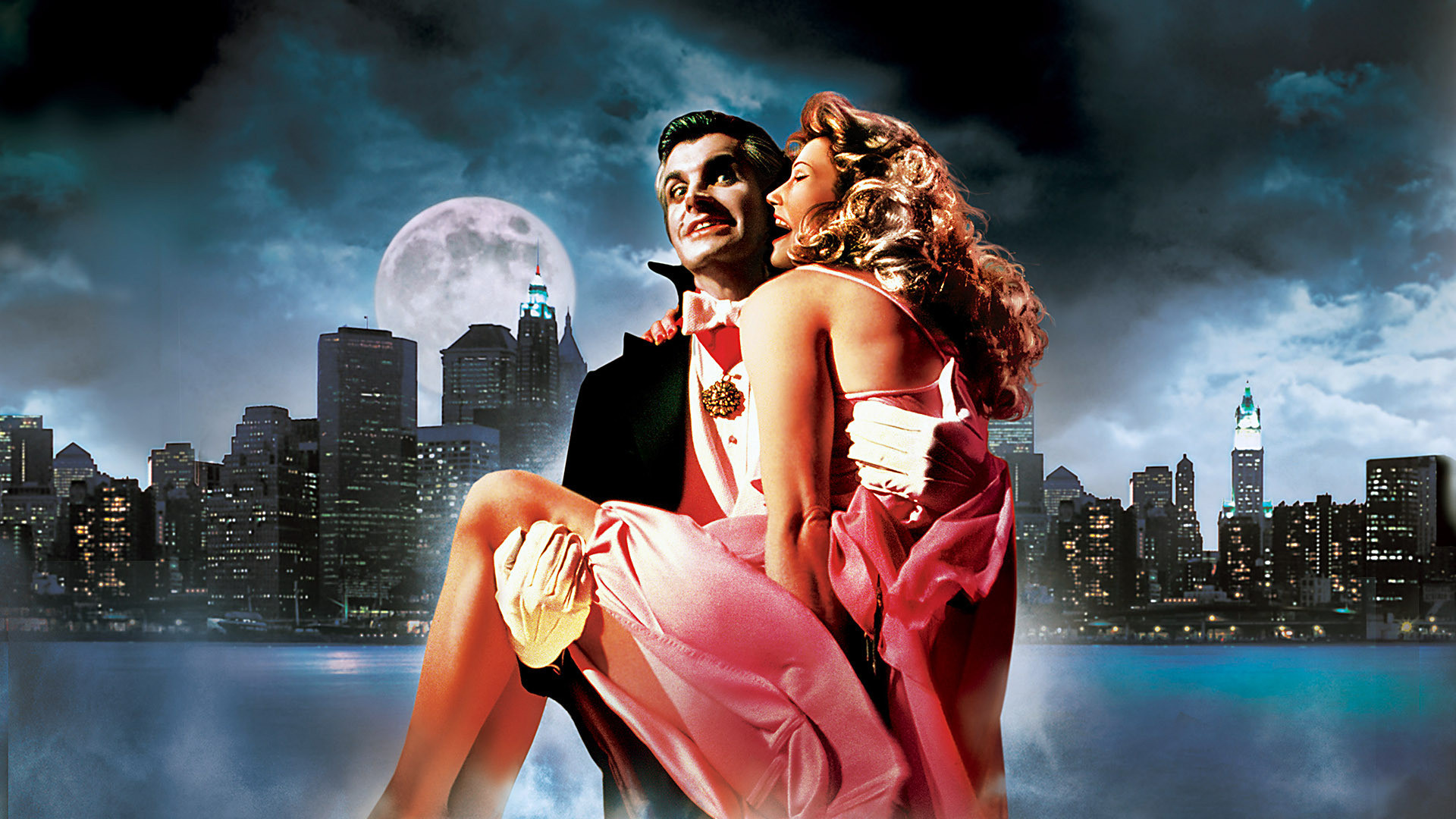 George Hamilton and Susan Saint James carry on in "Love At First Bite." (Photos from MovieStillsDB.com)

n the final year of the 1970s, Dracula rose from the grave not once but three times. He didn’t always get the reception he expected: Bram Stoker’s bloodsucker appeared in a trio of wildly different movies in 1979 -- an austere remake of F.W. Murnau’s 1922 masterpiece Nosferatu, a blockbuster-sized Hollywood production, and a schticky comedy. One became a surprise hit; one an unexpected box office disappointment; and one found a receptive arthouse audience and became one of its director’s touchstone films. Yet each would live on in its own way, finding new audiences as they influenced the films of the following decade and beyond.

Some characters prove tough to kill.

That’s not to say they can’t seem extremely sleepy for years. By 1979, Dracula had seen better days -- at least at the movies. Since the 1958 film Horror of Dracula, the character had felt like the property of Hammer Films, but by the middle of the ’70s, Hammer’s Dracula started to feel exhausted. By 1974’s The Legend of the 7 Golden Vampires — a goofy but fun co-production with Hong Kong’s martial arts producers the Shaw Brothers — star Christopher Lee had stopped showing up. Five years later, however, Dracula felt ready for a resurrection. It’s hard to determine where trends start and, in all likelihood, 1979’s three Dracula movies were the result of parallel thinking. But the first ripples of what became a wave can be traced to 1973, and to the pen of Edward Gorey.

By the early ’70s, Gorey was already deep into his career as an illustrator whose work found the intersection of the macabre and the whimsical. In 1973, producer John Wulp turned to Gorey to design the sets and costumes for a Nantucket revival of Dracula that would later move to New York in an off-Broadway staging. Bigger venues awaited it, however. In 1977, producer Eugene Wolsk took the Gorey sets to Broadway for what was billed as an “Edward Gorey Production of Dracula.” It became a sensation, thanks in part to Gorey’s black-and-white-with-splashes-of-red visuals, and in part to the star for whom Dracula would become a breakout role: Frank Langella.

In his New York Times review, Richard Eder praised the production but expressed some reservations about its star. “Mr. Langella is a stunning figure as Dracula,” he enthused, continuing, “tall, pale. Byronic. with an occasional prosaic reflex as if he were mentally counting coffins. He is a beautiful and sensual Dracula.” Then came the “but”: “but he notably lacks terror.” Based on Langella’s performance in the 1979 film, Eder’s not wrong. But he also misses the point. Langella plays Dracula as a tortured romantic yearning for satisfaction he’ll never find and determined to seduce others into his dark existence. Sure, there’s bloodsucking involved, and he’ll kill anyone who gets in his way. He is Dracula, after all. But he’s more seductive than blatantly scary.

Sensing a potential hit, and one with a character already associated with the studio, Universal readied a big-screen version for 1979 release -- one big enough to compete in a post-Star Wars summer movie environment. The studio even drew from the Star Wars talent pool, bringing in cinematographer Gilbert Taylor and composer John Williams. They didn’t stop there: Beyond securing Langella’s services, Universal recruited Laurence Olivier as Van Helsing and Donald Pleasence as Dr. Seward, director of an insane asylum and father to Lucy Seward (played by rising star Kate Nelligan), who in this version of the story serves as Dracula’s love interest. To direct, the studio brought in John Badham -- coming off the blockbuster Saturday Night Fever -- then shipped the production to England for moody location photography.

It was, in every sense, a big movie. But it only sort of worked. It’s telling that two strikingly different looking versions of the film exist (both included on the new Scream Factory Blu-ray): a theatrically released version with vivid colors that wouldn’t be out of place in a Hammer film, and a version with a desaturated color scheme that’s appeared in home video incarnations. In interviews, Badham essentially says he likes them both, and can’t really decide which he prefers. That’s generous, but it also speaks to a kind of wishy-washiness that pervades most of the film. His Dracula feels grand without ever seeming distinctive, apart from seduction scene with psychedelic visuals by James Bond title designer Maurice Binder. It needs a creative choice as daring as Gorey’s visuals (or maybe just Gorey’s visuals, which could have made for a remarkable, if much different, film). Langella’s performance, however, sets it apart. That an undead creature of the night could be so seductive creates its own kind of terror.

Dracula performed respectably but never caught fire with viewers in the summer of 1979, where it competed with such films as Rocky II, The Muppet Movie, and The Amityville Horror. That the latter-most title performed so much better also suggests that horror fans sought harder thrills that summer. The Langella Dracula arrived with the subtitle “A Love Story.” In a year that saw not just Amityville, but Alien, Phantasm, and The Brood — and one still reeling from Halloween — it felt a little out of step.

It also arrived late to the Dracula party, preceded in April by Love at First Bite, the result of a pool-side brainstorming session between star George Hamilton and writer Robert Kaufman. (The other fruit of that session -- the story of a frontier psychiatrist called How the West Was Shrunk -- never came to be.) The resulting film tries to squeeze every possible joke out of a pretty thin premise: What if Dracula went to disco-era New York? It plays like a tortuously extended ’70s variety show sketch, down to the presence of Arte Johnson as Renfield. That Hamilton spends the film doing a passable-at-best Bela Lugosi impression doesn’t help, but the film does have some fun time-capsule elements in 2019. Hamilton’s Dracula doesn’t just turn down an offer of wine from love interest Cindy Sondheim (Susan Saint-James), he has to refuse a smorgasbord of alcohol, weed, and pills.

Unexpectedly, critics went for it. David Ansen’s Newsweek review, quoted in the film’s ads, typified the response: “You’ll hate yourself for laughing, but laugh you will.” It is very possible to watch Love at First Bite without laughing, but audiences turned out anyway, making the film a hit. Which raises another possibility: Maybe audiences could handle a romantic Dracula, so long as he was silly, too.

There’s nothing silly about Werner Herzog’s Nosferatu, however, the second of the director’s five fraught collaborations with star Klaus Kinski. A remake of F.W. Murnau’s silent classic (a kind of bootleg version of Dracula that was almost destroyed as part of a copyright fight), it successfully merges that film’s expressionistic visuals with Herzog’s get-in-the-thick-of-it approach. It’s unsettling from the start, taking cues from Popol Vuh’s otherworldly score and using a languorous pace to build tension. Jonathan Harker’s (Bruno Ganz) long journey to Transylvania takes up much of the first act, a journey through misty mountains made against the advice of everyone he meets along the way. Once there, he’s greeted by Kinski’s Dracula, a bestial creature who repulses him but who draws him into a castle filled with images of death and decay.

And rats. So many rats. Only Willard, Rat Film and Ratcatcher can (maybe) boast more rats than Herzog’s Nosferatu, whose production filled the canal-abutting streets of the Dutch town of Schiedam with a reported 11,000 rodents. The disturbing imagery helps create a sense of disease and infestation key to Nosferatu’s effectiveness.  (It should be noted the film became the subject of animal cruelty complaints, and the audio commentary contains a passage in which Herzog himself speaks of dyeing the rats a matching shade of gray, a painful process that sounds like something maybe even Dracula would consider unethical.)

Herzog’s film pays homage to Murnau’s masterpiece, but it also demonstrates how different the same story can look at different points in German history. Its Dracula is an agent of corruption who targets not just individual victims but a whole way of life: His influence spreads through Harker’s picturesque German town like a disease, or a destructive ideology, and can be defeated only by the purest of heart, embodied here by Isabelle Adjani’s Lucy Harker. As in the original, Lucy has to sacrifice herself to defeat the monster, but Herzog’s film ends even more pessimistically than the original. Dracula’s mission lives on through the infected Jonathan, and the film ends with an image of him wandering off to parts unknown. The nightmare isn’t over.

Herzog’s film won critical acclaim and performed respectably in arthouses. But, as with the other ’79 Dracula adaptations, its impact extended beyond its first run. The DNA of all three would show up in the vampire films of the ’80s and ’90s. The most financially successful of the bunch, Love at First Bite, would cast the longest — and most dire — shadow, inspiring films that, as Vampire Movies author Charles Bramesco puts it, “nicked the fish-out-of-water premises and ambient randiness in the air from Love at First Bite.

“Instead of sending Dracula to America,” Bramesco continues, “Transylvania 6-5000 sends a couple Americans to Dracula country in an effort to reverse-engineer success by doing the same thing but differently. And the frankly dire Once Bitten tries to Porky's-ify the vampire genre with crotch jokes.”

But elements of less profitable entries would find their way into films as well. Tony Scott’s The Hunger took the sexiness of the Langella Dracula to new levels of erotic intensity, setting an example followed by vampire-adjacent films such as Lifeforce and Lair of the White Worm. Its true heir, however, is the Francis Ford Coppola-directed Bram Stoker’s Dracula, which wove its romantic qualities into a coherent vision. Nosferatu’s feral take on the vampire would live on as well. The undead of The Lost Boys and Near Dark don’t share Kinski’s rodent-like appearance, but they do borrow from his viciousness. Successful or not, each introduced ideas that vampire movies would sort through and modify for years, and in some ways are still sorting through and modifying. The music made by 1979’s children of the night still lingers.

‍Keith Phipps writes about movies and other aspects of pop culture. You can find his work in such publications as The Ringer, Mel Magazine, Vulture, TV Guide, Decider, Polygon and The Verge. Keith also co-hosts the podcasts 'The Next Picture Show' and lives in Chicago with his wife and child. His all-time favorite horror film is Dawn Of The Dead but he’s still baffled by the moment when the biker decides to use the blood pressure machine in the middle of the zombie attack. Follow him on Twitter at @kphipps3000.