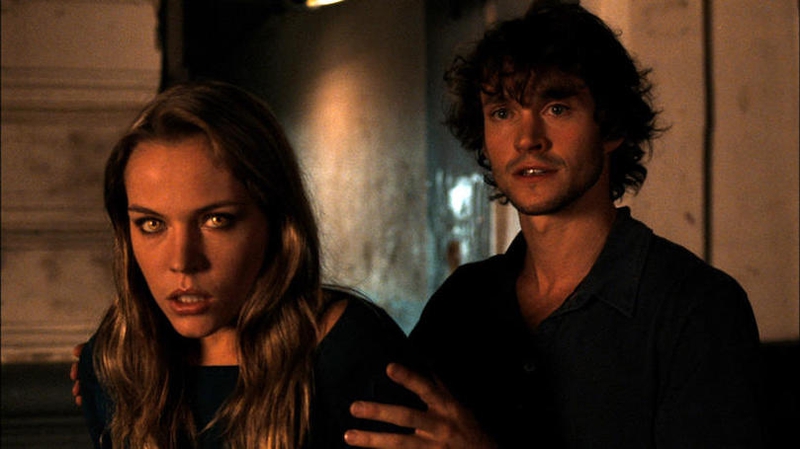 Editor's Note: This was originally published for FANGORIA on January 25, 2007, and we're proud to share it as part of The Gingold Files.

There’s nothing terribly wrong with Blood & Chocolate—as long as you don’t go in expecting a) a faithful adaptation of Annette Curtis Klause’s book or b) a scary movie about werewolves. I haven’t read Klause’s young-adult novel, but by all accounts the storyline has been significantly altered in Ehren Kruger and Christopher Landon’s script, from the location (Bucharest instead of the U.S.) to the fact that the “chocolate” part of the title, which served as a meaningful figure of speech in the printed version, has been made literal by having heroine Vivian (Agnes Bruckner) work in a candy shop.

As for the lycanthropes, there are no half-human/half-beast creatures, no transformations—just young people who leap into the air and, a bit of glittering CGI later, land on all fours as actual wolves. Not only that, but they retain the consciences and emotions they had when on two legs, and can motivate their physical alterations at will—thus eliminating the internal struggle between the civilized and wild sides that can make lycanthropy such a potent and frightening metaphor. As such, they’re not the conflicted hybrids that the word “werewolf” suggests, but simply beings who can exist as people or canines with equal ease. You could call this the first arewolf movie.

The only allegory left in Blood & Chocolate is the idea of this wolf pack as one more persecuted subculture, whose members are forbidden from socializing too closely with humans lest their existences be exposed. A prologue demonstrates what can happen when that occurs—Vivian’s family is slaughtered by an angry mob when she’s a child—but in the present day, when Vivian meets visiting artist Aiden (Hugh Dancy), who’s fascinated with stories of the loup garou, the heart starts wanting what it wants. Gabriel (Olivier Martinez), leader of the lycanthropes, doesn’t take kindly to Aiden’s curiosity and the threat it poses to both his “family’s” secrecy and his own designs on Vivian, and thus a love triangle is established, with Vivian torn between her growing feelings for her new beau and devotion to her kind.

Blood & Chocolate is not without its pluses; director Katja von Garnier gets a lot of atmospheric mileage out of the Romanian locations, and the “hunt” setpieces, in which the youths transition into their furry forms as they pursue their prey, have a certain eerie energy and beauty to them. The way in which they adopt lupine movements while out in their regular lives is a nice touch, too. Bruckner and Dancy are nothing if not earnest as they enact their potentially doomed romance, while Martinez simmers and smolders convincingly as Gabriel.

Unfortunately, Vivian and Aiden’s relationship doesn’t catch sufficient dramatic fire to motivate the story; the sense of overpowering love that would lead her to risk her “family,” and him his life, just isn’t there. And rather than venturing into the dark psychological territory the material seems rife with, the final reels are largely devoted to a typical action-film resolution full of fire and gunplay and the application of silver (one element of traditional lycanthropic lore that has been retained). There’s a sense of reticence about Blood & Chocolate, a feeling that the filmmakers didn’t want to push the sexual or monstrous themes too far—which isn’t necessarily the best approach for a movie about young werewolves in heat.

Except that, of course, this film is being aimed squarely at the PG-13 crowd—which, to be sure, is the group that helped make the book so successful. But if the filmmakers were going to alter the story the point where some of the most devoted readers might rebel, it’s a shame that there isn’t sufficient narrative meat for the rest of us. As things stand, it’s no surprise that Blood & Chocolate comes from the producers of Underworld, and that the fact is being heavily touted in its advertising; it plays very much like an entry in that love-and-lycanthropy saga that has been tamed down for consumption by 13-year-old girls.