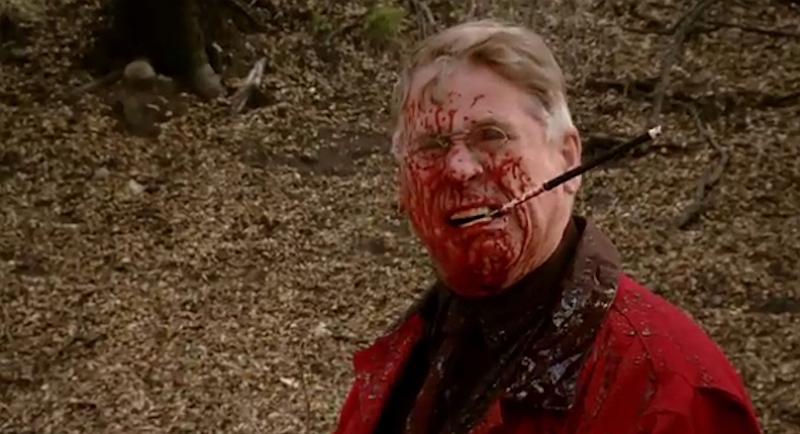 Editor's Note: This was originally published for FANGORIA on September 25, 2012, and we're proud to share it as part of The Gingold Files.

Barry Bostwick became part of an enduring cult sensation when he acted, sang and danced through The Rocky Horror Picture Show, then won notice on TV for playing historical personages like George Washington. Now he’s appearing in a presidential role that bids to develop a cult of its own: the over-the-top horror/comedy FDR: American Badass.

As far from a stately biopic as it’s possible to get, FDR: American Badass features a Franklin Delano Roosevelt who doesn’t let confinement to a wheelchair get in the way of partying, bagging babes and battling the werewolves that are actually behind WWII and plotting the conquest of the world. It’s Bostwick’s second venture into humorous horror this year, following Some Guy Who Kills People, in which he provides a number of highlights portraying a lawman looking into the murders of those who have tormented the title character (see review here). Bostwick spoke to Fango about both movies, as well as the one he made nearly 40 years ago and is still recognized for today…

How did you get involved with FDR: American Badass?

When you read the script, what were your first impressions of the character and its crazy take on history?

I thought the president swore too much—and then I thought, “That’s what I want to play.” They had to explain to me a lot of the hip-hop talk, the sort of street talk, and once they explained what that was all about, I was sold. It was risky on their part, too, writing in such a way that could be confusing, in another, curious language. But I liked the mixing of the periods, and the casting; I think it was cast brilliantly. And once I got over the whole werewolf thing, and realized we were killing werewolves with bad makeup…but that’s what we were supposed to be doing, and that was the whole point of the movie. It had this sort of [TV’s] Batman-esque tone, and that sold me—that old “Wham!” “Bam!” thing, you know? Although in this one, it’s more of a “Wham, bam, thank you, ma’am!” situation. And I’m always attracted to anything where there’s naked ladies.

Did you do any research into FDR to bring any of the real person into your character, or did you just go with what was on the page?

I went with what was on the page. I knew a little of the real history, but I knew I definitely couldn’t stick to that. I did more physical things. I knew he wore a ring on his little finger, and what kind of ring it was. I knew the whole thing about the cigarette holder, you know? But we made sure to get one that was just a little bigger than normal. We wanted to do everything slightly larger than life, so that was my goal. And if I was going to have a dialect, which he did in reality, I would only use it for the important speeches. The other times, I would just try to be real. They had to trust that I was close enough in tone to the guy. I didn’t have to do a complete impersonation, because that would’ve gotten boring after a while, since every time he talked, he would go up! It would lose the fun of the character. I left it to the people around me to do the impressions. Many times, your character is established by how people react to you, and if they’d react to me as if I was the president, then I was him, dammit!

Talking about the physical side of your character, you’re in a wheelchair for most of the film. Did you find that inhibiting?

I found it interesting. I’d never played a character who was in a wheelchair. It was a source of a lot of humor in the beginning, which I liked. I liked the fact that they’d made him pissed off about it. The scene with the boy in the wheelchair is one of the best in the movie, because it’s telling of what somebody’s real emotional reaction would be, whether he’s the president or a dockworker. You wouldn’t just jump right into it. And being physically in the chair, it was just another reason to focus on what I was saying. When you start taking things away from people, they focus on something else. They focus on what’s more important, and for me, it was really using my sense of humor, which he had in abundance. That’s what I really honed in on, in terms of the root of the character, in that everyone would say that FDR was always trying to make people laugh. He was the guy on the golf course who would be farting behind the guy teeing off.

Did you get to contribute any dialogue or scenes of your own?

Probably, but on this kind of movie, you move so fast. It wasn’t like other films I’ve done, where it was organically possible to do that. This film had a certain pace where, not only in the making of it, but during the playing of it, we pretty much stuck to the script just to be able to get through the day’s work.

Writer/producer Ross Patterson has said that you and Bruce McGill had a lot of fun together, working out little bits of your own.

That just made the day fun. That made it worth going to work. Your tendency is to always try to find another level of the work, of what you as an actor can bring to it. Particularly if you have other good actors like Bruce, who is so deadpan and yet so available; he’s a real acting partner. I wish they were all like that. I’m the same kind of person, so we had the flexibility to nudge-nudge, wink-wink, do whatever we wanted to do, make little things up. That’s what creates the chemistry between characters. It’s those little moments you fill it in with, not just what’s on the page.

You mentioned the profanity before. Is this the most profane film you’ve ever done?

Oh yeah. And probably will be forever. It could be the most profane film ever made by anybody until Ross Patterson makes another movie.

Patterson seems to have been the prime mover behind FDR, though Garrett Brawith is credited as director. How did they divide up the duties of guiding the film as a whole?

Well, you always knew who the boss was, and that was Ross. You always went to Garrett for any acting or directing issues, but if you had any questions about what something meant, or the overview of the movie, you went to Ross. And I’d always go to Ross to find out what the hell I was talking about!

You really stole Some Guy Who Kills People as Sheriff Walt Fuller. What was that experience like?

That was another one case of working with, I think, brilliant young people, and everybody was there for the same purpose, which was to make that film different, interesting and as real as possible. I just worked with that director, Jack Perez, on another movie we finished about a month ago for Syfy called Blowing Vegas Off the Map [retitled Blast Vegas], and I told him, “I’m only going to do movies in which the entire theme of the movie is in the title.” He’s a wonderful director, and he’s got a great future ahead of him. He has a great eye and understands the movement and history of film, and he’s intelligent. I like that. I’ve worked with a couple of young guys out of USC or other schools who have an understanding of the history of film, and build their work on the shoulders of those who came before. They’re not trying to make something that’s so totally different, or make waves without a proper wave machine.

You brought a great deadpan to Fuller. How did you approach that character?

I just tried to make him a small-town sheriff who’s fascinated by this case and is constantly looking, constantly watching, constantly trying to put it together—and constantly eating. If you notice, I’m always chewing on something. That was my hook, my handle on the character: to have something in my mouth at all times.

You will, of course, always be remembered as part of The Rocky Horror Picture Show. How has that film’s legacy affected your career since, and do you still look back and revisit it today?

Well, yeah. I think of that movie very fondly. I love that film, I love what has happened to it and I love all the fans who have stuck with it over the years. They are some of the gentlest, kindest people in the world, and I’ve made some really lasting friendships off of that movie. Not only from having worked on it, but also from the people who helped turn it into what it has become because of their loyalty and love for it. How bad can it be when somebody comes up to me and says, “Can you sign my arm?” and I do, and then a year later, I see that they tattooed my name on their arm exactly where I signed it. Now, that’s power!

What do you think has given Rocky Horror that much longevity?