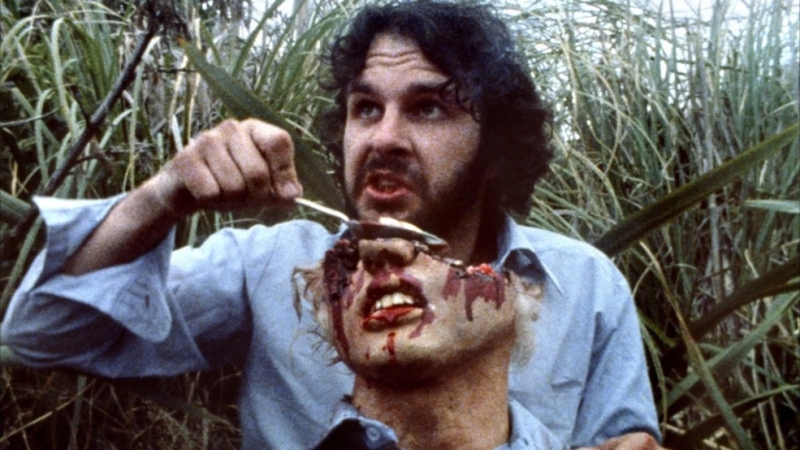 Editor's Note: This was originally published for FANGORIA on November 26, 2001, and we're proud to share it as part of The Gingold Files.

Is anyone else having a problem getting their mind around the fact that the man behind the low-budget cult gore classics Bad Taste and Meet the Feebles is now about to unveil one of the most elaborate, expensive epics ever made? To be sure, the fact that a filmmaker of Peter Jackson’s skill has been handed a $270-million budget is cause for celebration, and makes Lord of the Rings a trilogy to be highly anticipated (no doubt the first entry, Fellowship of the Ring, will outshine the Harry Potter movie). About the only negative associated with Jackson’s involvement in this mammoth project is that it precluded his contributing to Anchor Bay’s new Bad Taste DVD. The result is that the extras in the limited-edition two-disc release (there’s also a no-frills single-DVD version) come from second-hand sources—but they’re likely to be fresh to most viewers nonetheless.

The obvious highlight is the documentary "Good Taste Made Bad Taste," which has the second DVD to itself despite running only 25 minutes. Produced in Jackson’s native New Zealand shortly after the movie’s overseas release, it’s a terrific tribute to a local boy made good as well as a thorough exploration of how he pulled off technical miracles with very limited funds. The beardless director/writer/producer/cinematographer/editor/FX creator/actor appears on camera, showing off makeup FX, homemade camera rigs and other equipment; there are also interviews with his mum and dad, the owners of the mansion used as a location (who note that the crew always cleaned up after themselves) and others, scenes from Jackson’s Super-8 shorts (including one shot in widescreen!), special FX tests and more. It’s a fine tribute to homespun ingenuity—and, as such, may remind some Jackson fans of the director’s brilliant cinema mockumentary Forgotten Silver (available on an excellent DVD from First Run).

For a feature that (as we see in the doc) was shot on 16mm with windup Bolex cameras, Bad Taste looks quite spiffy here. Though there’s unavoidable film grain, the colors are vivid and the picture very sharp; although the movie was shot at full aperture, the 1.66:1 letterboxing rarely compromises the image. Three different soundtracks (Dolby Digital Surround EX and 2.0, and 6.1 DTS-ES) crisply capture the movie’s audio in all its squishy glory.

The other extras amount to a trailer and Jackson biography; the limited edition comes in a trifold case with a lenticular, bird-flipping cover that also contains a 16-page color booklet, which includes fun cast interviews from a Bad Taste website and numerous tasty photos. Some might feel that “limited” applies in a different way to this package, however; there was really no reason why its material couldn’t have fit on a single disc, and it’s a bit unreasonable that Anchor Bay is charging an extra $20 for the half-hour doc and enhanced packaging. Certainly, everything contained in the double-DVD set is as good as it could be, and while it’s understandable why there isn’t more, you can’t blame collectors if the $39.98 price tag leaves a you-know-what in their mouths.