Attack of THE MUNSTERS: The Munsters in Movies

From the small screen, to the big screen, and back again (and again) 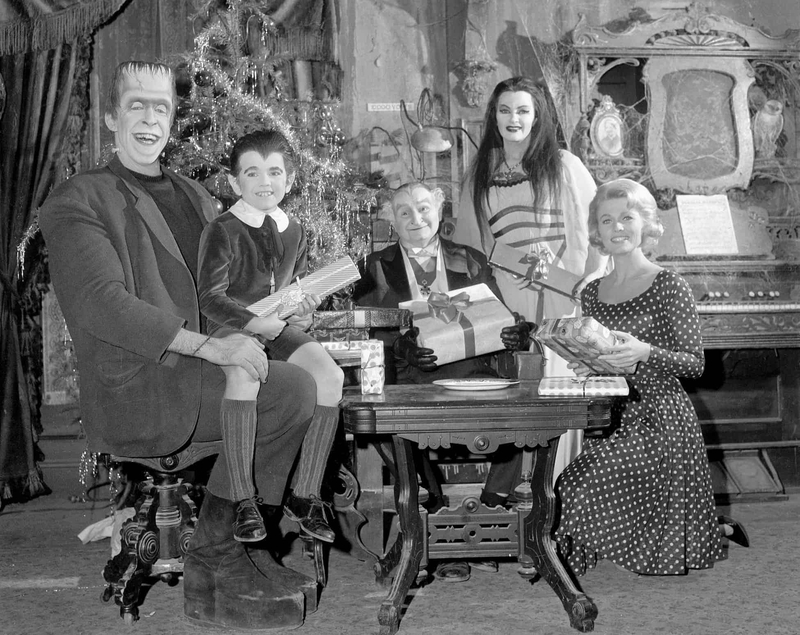 THE MUNSTERS (Pat Priest as Marilyn)

Back from the grave to spread unfathomable terror, the most sinister figures in pop culture history will soon be among us again in Rob Zombie's latest shocker... The Munsters! Okay, so they're absolutely adorable to us, but the fright family certainly has their fair share of creep-cred. Created by Rocky and Bullwinkle writers Allan Burns and Chris Hayward, produced by Leave it to Beaver's Joe Connelly and Bob Mosher, and filmed at the horror-home of Universal Studios, The Munsters is exactly the show you would expect from that combination: a wacky sitcom starring the average American family... who just happen to be bloodthirsty monsters from Transylvania. The Franken-father was a lovable oaf named Herman (Fred Gwynne), his loving wife was the vampire Lily (Yvonne De Carlo), wolf-pup Eddie (Butch Patrick) was their son, Count Sam Dracula (Al Lewis) was better known as Grandpa, and Lily's unfortunate niece was Marilyn (played by Beverley Owen till episode 14, then by Pat Priest), a young woman cursed with the wretched good looks of a model. Like the stars of the contemporaneous Addams Family sitcom, the Munsters are eccentrics who find solace in the strange and revel in the revolting. Despite their peculiarities (and implied murders), they're a well-meaning group with good hearts, both in their chests and on their desks.

Though The Munsters was popular (it beat The Addams Family in the ratings), it was surprisingly short-lived for a series with its cultural longevity. The show aired on CBS from September 24, 1964, to May 12, 1966, ending when it experienced a significant drop in the ratings due to ABC's Batman. With only two seasons and 70 episodes, The Munsters joined I Married Joan and Space Patrol in the great television graveyard. But good monsters never stay dead, so the ghoul-group found new popularity in syndication, leading to several movies. In celebration of their immortality and the news of Rob Zombie's reboot, I'm going to exhume the monstrous, Munster-ous freak-flicks made throughout the years!

To keep things simple, I'm only going to look at the films and not the pilots/reboot shows. If you are a passionate admirer of The Munsters Today, prepare to have your heart broken. Most of these were made for television, but one did lurch its way into theaters. The Rob Zombie reboot will be the first theatrical Munster movie since 1966, so it's a GHOUL time to be a fan! Without any further a-BOO, I now present the merry-scary movies of... The Munsters! 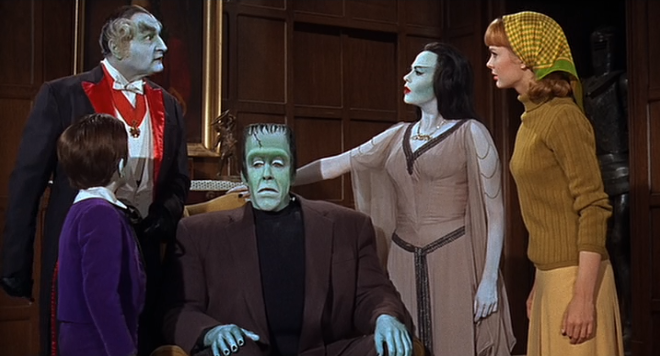 Produced immediately after the original show's cancellation, Munster, Go Home! is very much like an extended episode, which is a compliment in my book. Everything we associate with the familial frightsters is present here: the lighthearted lunacy, the dilapidated Munster Mansion, and most importantly, the cast. The exception was Pat Priest as Marilyn, who Debbie Watson replaced. The studio decided that Priest was "too old" to reprise a role she played just a few months prior. As a wise Robert Zombie put it in his commentary, that's "pretty crummy." Otherwise, the original players return to cause screams of every nature. The only difference between Munster, Go Home! and the series? This was shot in glorious, GORE-ious Technicolor! Yes, sir! This was the first time anyone saw the groovy ghoulies in color, which is enough to make this a must-watch. Filmgoers could now see Herman's slime-green complexion, the way God intended it! On top o' that, this one was actually shown on the big screen.

In this outing, Herman inherits an English estate and the title of Lord Munster from his deceased uncle. When the Munsters arrive in England to collect, they find themselves the target of scheming relatives and an enigmatic assassin known as "The Griffin." Just like in the classic "Hot Rod Herman" episode, the adventure ends with Herman racing in that grand coffin roadster, Drag-U-La. In addition to the regulars, there's a wonderful cast of character actors that includes the incomparable Terry-Thomas of The Abominable Dr. Phibes fame and the prolific John Carradine, the man who appeared in every film produced before his death and a few after. As if to show a lack of hard feelings, Munster, Go Home! includes a mention of the original show's murderer, Batman.

If you only watch one Munster movie (besides the upcoming Rob Zombie flick, of corpse), Munster, Go Home! is the one. It's the only film that comes close to capturing the show's signature brand of silly spookery. If you want to introduce your kids to both The Munsters and traditional monsters in general, this is a good place to start. Munster, Go Home! is a home run!

After seven years in syndication, The Munsters were re-animated once again, but this time with the emphasis on "animated." Aired as part of "The ABC Saturday Superstar Movie" series, this one-hour telefilm was meant to be the start of a new cartoon show... which it wasn't. Al Lewis returned to voice Grandpa, but the rest of the originals are nowhere to be heard. Likely inspired by programs such as The Archie Show and Josie and the Pussycats, Eddie (now a teenager) forms a band with his never-before-seen cousins, Lucretia and Igor. The swingin' songsters are given a car that's haunted by the ghost of an undertaker and then upgraded by Grandpa to run on music, which infuriates a group of gangsters, who then challenge the Munsters to a race. Why does any of that happen? To quote Bart Simpson, "Cartoons don't have to make sense."

Considering the franchise's history with the medium, it's a little surprising that The Mini-Munsters was the only work of animation to feature the creepy crew. The concept of a funny family of famous fiends was first pitched to Universal by animation legend Bob Clampett (the guy who put the "Looney" in "Looney Tunes"), who developed the idea from around 1943 to 1945. (It's worth noting that Universal was still producing their now-classic monster movies at that time.) While nothing came of that idea, a similar proposal was submitted by the aforementioned Rocky and Bullwinkle writers, which was fashioned into a pilot script by Norm Liebman and Ed Haas. Executives debated whether or not the series should be animated. Finally, a live-action presentation was filmed, and the rest is history.

Though far from perfect, The Mini-Munsters give us a taste of what might have been had Universal committed to the cartoon format. The vibe is pretty groovy, and the humor is still in that jugular vein. It's the kind of movie you should watch while wearing Spider-Man pajamas and wolfing down a bowl of Fruit Brute (but make sure to check that expiration date). The Mini-Munsters was just made for Saturday mornings. 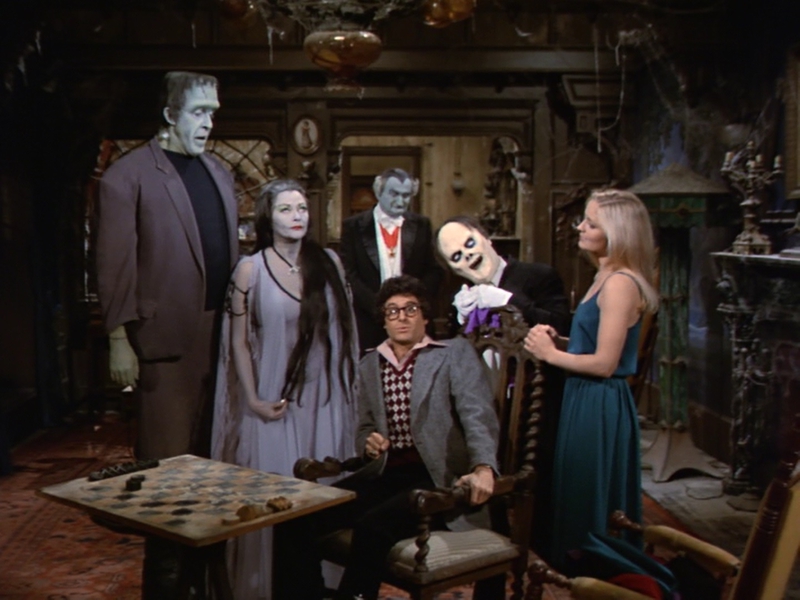 REVENGE! REVENGE! Yes, the Munsters get their revenge... but on what? The plot concerns an ominous wax museum (if you read my piece on House of Wax, you know how I feel about those) and wax-coated robots who are used to frame the Munsters for robbery. For most of the movie, the Munsters are simply trying to clear their name, which doesn't seem too vindictive. In the end, they do manage to expose the mad artist behind the plot (played by Sid Caesar), but it's a very mild revenge at best. Still, the film itself is a decent little goodie for Munster-mashers of all ages.

There are two things that separate Revenge from the other Munster outings. The first is that this is the last time the majority of the original cast reprised their roles. Fred Gwynne, Yvonne De Carlo and Al Lewis all appear, though Eddie and Marilyn are played by newcomers

K. C. Martel and Jo McDonnell, respectively. The other noteworthy aspect is the appearance of a new Munster, the aptly named Cousin Phantom of the Opera, played by Bob Hastings (who was Charlie the Raven on the original series). In a running gag that oddly anticipates the uber-popular Andrew Lloyd Webber, this Phantom sings every chance he gets, causing glass to break. It's an amusing enough bit, but what makes it great is seeing another timeless monster in the family. Subsequent films would add other immortal creatures to the Munster tree, which became a highlight of the film series. 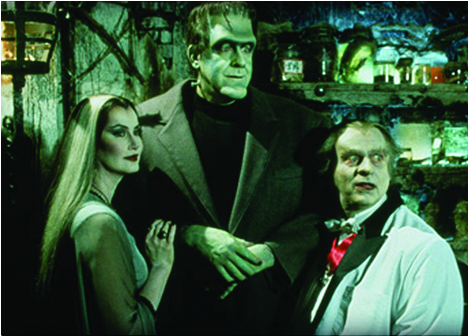 If you ever wanted to see the Munsters in a political thriller, have I got a film for you! Edward Herrmann (Herman), Veronica Hamel (Lily), Mathew Botuchis (Eddie), Christine Taylor (Marilyn), and Robert Morse (Grandpa) take over as the eponymous boo-brood, though Yvonne De Carlo, Al Lewis, Butch Patrick and Pat Priest make genuinely amusing appearances (Gwynne had already passed away at this point). Forced out of Transylvania by an angry mob (one of my favorite clichés), the Munsters move to America and discover that their relative Norman Hyde is missing. Meanwhile, a bigoted politician by the name of Brent Jekyll is running for congress, and... I think you know where this is going.

Surprisingly, the head vampire from The Lost Boys is a warm and endearing Herman, and Robert Morse is always a superb addition to any cast. This time, our new Munsters are the Hydes, Elsa and Norman. Elsa is clearly modeled after the Bride of Frankenstein, which is strange because we see Lily and Herman watch Bride of Frankenstein on a plane without remarking on the Bride's uncanny resemblance to their Elsa. Are the Universal Monster movies documentaries in this world? Norman's design is suitably ghoulish, though I do wish they had modeled him after Fredric March's Hyde. Speaking of Hyde, Marilyn is the mad doctor's daughter in this incarnation. That's a change I can dig. 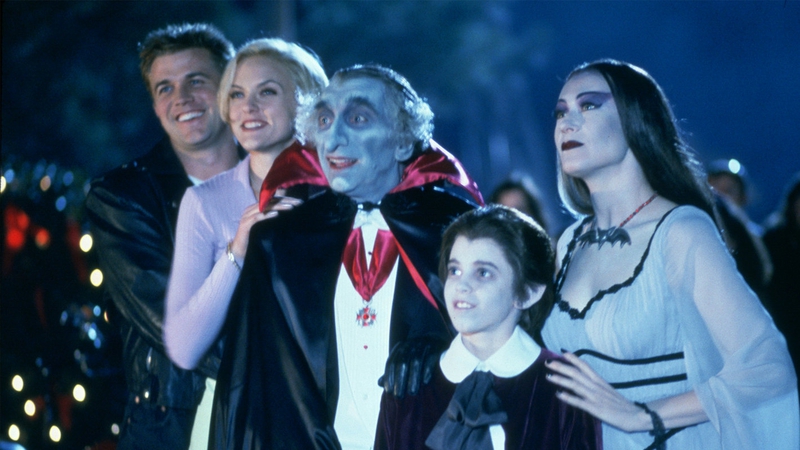 Ho-ho-horror! If there's one thing I'm a sucker for, it's a CREEPmas special! Featuring no cast members from any of the previous installments (save for the wonderful Mary Woronov as the nosy neighbor from Here Come The Munsters), this Yuletide yelp-yarn finds the Munsters endeavoring to put together an old-fashioned Transylvanian Christmas for a homesick Eddie. Objectively the least successful of the bunch, I do have sort of a soft spot for it. Much like The Nightmare Before Christmas, this one juggles seasonal sentimentality with a classical sense of morbidity. For those merry madmen looking for something to watch between Gremlins and Batman Returns this holiday season, give The Munsters' Scary Little Christmas a watch.

And now for the best part: the monsters! This one is a real graveyard smash in that department! The Phantom! The Hunchback of Notre Dame! The Creature from the Black Lagoon! The Wolf Man! The Invisible Man! Rosemary's Baby! A generic Halloween devil! All the ghouls you ever loved are here! For that reason alone, Scary Little Christmas is a cherished Crypt-mas tradition in my home. The best part? They actually look like their horrific counterparts, not just parodies. Who doesn't want to spend the horrordays with cinema's most notorious creeps?

That's it for the Munster movies! A reboot film was being developed by the Wayans Brothers around 2004, though nothing came of it. 1991's My Grandpa is a Vampire may not be a Munster flick, but it does have Al Lewis as the titular fangster. Outside of that, we'll just have to wait for Rob Zombie's picture for more Munster movie madness. Until then, stay sick and keep your neckbolts on tight!