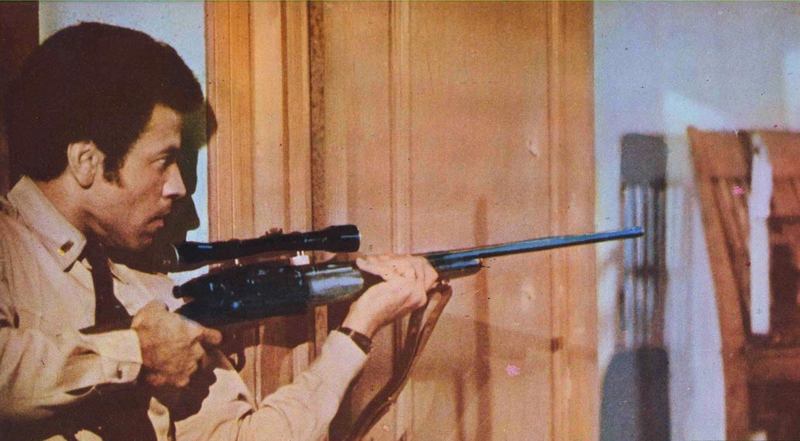 Editor's Note: This was originally published for FANGORIA on November 14, 2013, and we're proud to share it as part of The Gingold Files.

John Carpenter’s second feature (some might say his first “real” movie, after the expanded student production Dark Star) set a template that served the director throughout his subsequent career. Assault on Precinct 13 is a precursor to the siege scenarios in The Thing, Prince of Darkness and others, with attackers as inscrutable and unstoppable as Halloween’s Michael Myers. And it still stands on its own as a remarkably assured piece of work.

Debuting on Blu-ray from Shout! Factory, Assault on Precinct 13 pits cops and convicts in a soon-to-close Los Angeles police station (actually in Precinct 9, District 13, but never mind) against a ruthless, multiethnic convergence of street gangs seeking retribution for the shooting of one their warlords. That killing is itself vengeance by a grief-crazed father (Martin West) after the murder of his young daughter (Kim Richards)—a shockingly random act of violence that punctuates the carefully accruing tension of Carpenter’s first act like a string of exclamation points. Having established all the characters through deftly crosscut setup scenes, the writer/director sends the dad fleeing to the precinct house, the thugs not far behind him, as night falls and the siege scenario shapes up.

Assault remains one of Carpenter’s very best works, showcasing his gifts for gritty action, ominous framing and touches of spiky humor, salted with lots of great hardboiled dialogue. Austin Stoker as Lt. Ethan Bishop and Darwin Joston as sardonic convicted killer Napoleon Wilson are a perfectly matched pair of tough guys on opposing sides of the law who learn to trust one another in the face of the greater threat, and Laurie Zimmer’s cool bravery as secretary Leigh no doubt influenced Carpenter’s naming of his Halloween heroine. Speaking of that slasher smash, its co-stars Nancy Loomis and Charles Cyphers also appear here in small but vivid roles. Reportedly made for only about $100,000, Assault is as finely crafted as any of the many studio police pictures from its period, and it receives a fine showcase on Shout!’s Blu-ray.

Carpenter states on the disc’s commentary that Assault represented a learning experience in dealing with the widescreen format, but you’d never know it from watching the film. The new high-definition 2.35:1 picture offers a largely fine balance of naturalistic colors and rich blacks, with only a few scenes that appear a bit too bright in a transfer that otherwise accentuates the threatening mood Carpenter builds. The audio options are DTS-HD Master Audio 5.1 and 2.0 mono, and while the former obviously offers more directional atmosphere, the latter is just fine too, boasting punchy sound FX, clear dialogue and robust replication of Carpenter’s eerie synth music, which can also be enjoyed on its own on an isolated score track.

The filmmaker’s aforementioned commentary dates all the way back to Assault’s laserdisc release—complete with a reference to beginning side two—and as on some of his disc talks, he spends too much time narrating the action. Still, there is sufficient production detail and discussion of the film’s influences (Howard Hawks comes up a lot) to make it worth a listen if you haven’t heard it before. Carpenter is a little looser and more anecdote-prone in an on-camera interview, accompanied by Stoker, taped after an American Cinematheque showing of Assault (and ported over from Image’s previous DVD). He imparts fresh information while elaborating on certain topics from the commentary (there, he states that Richards’ murder would earn an adults-only rating today, while on stage he reveals that he got an X back then too and trimmed the scene for the final rating, only to send the uncut feature to theaters!), while fielding inevitable audience queries like when certain others of his movies will get deluxe disc treatment.

Stoker isn’t asked very much and thus doesn’t say very much here, so it’s nice that among the fresh extras is a “Bishop Under Siege” interview featurette, in which he warmly reminisces about the film and his co-stars. In “The Sassy One,” Loomis reflects on her experiences with Carpenter on both Assault and their subsequent movies together. The most significant among the new supplements is a commentary by art director/sound FX editor Tommy Lee Wallace, moderated well by Michael Felsher (also responsible for the Stoker and Loomis segments). The soft-spoken Wallace sheds more light on the practicalities of shooting such an intense film on a tiny budget, drops bits of trivia (the .357 Magnum gunshot effect was borrowed from Dirty Harry) and goes over his subsequent Carpenter collaborations, including a discussion about how The Fog was completely reinvented in postproduction.

The only disappointment of the Blu-ray is that it doesn’t also carry over the DVD’s Production Gallery, a complete history of Assault in text and rare visuals (from stills to script pages to storyboards), so those who own that prior disc are advised to hold onto it. Nonetheless, the hi-def upgrade and additional bonus features make the Blu-ray absolutely worth the double dip.