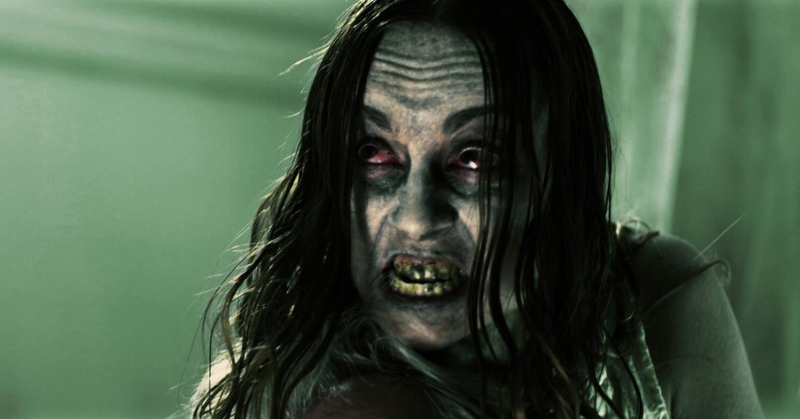 Editor's Note: This was originally published for FANGORIA on September 25, 2014, and we're proud to share it as part of The Gingold Files.

There have been so many exorcism movies by now, especially in the last decade, that it almost seems beside the point to complain about them. Better to seek out the more interesting variations on the well-traveled form, one of which is Marc Carreté’s Asmodexia. It opens with an unpromising main-title montage of grainy video images and VHS tapes being inserted in VCRs; fortunately, the movie doesn’t live down to this promise of being a found-footage possession thriller (a subgenre unto itself by now). Instead, it’s a more traditionally filmed, character-oriented and often eerie combination of horror film and road movie.

Eloy (Lluís Marco) is an older and wizened man first seen taking an almost assaultive approach to casting out demons; 15 years later, “three days before the resurrection,” we catch up with him traveling the Spanish countryside with his granddaughter Alba (Clàudia Pons), in a caravan tricked out as an exorcistmobile. From the beginning, there’s a nice give-and-take between Eloy, who is aggressively devoted to his cause, and Alba, who occasionally brings up the pesky ethical questions their practice provokes. Still, when called into action, she proves to be just as fierce an exorcist as the old man, though Carreté wisely doesn’t try to build the tension specifically out of the by now familiar rites; they’re handled in intense yet matter-of-fact fashion, and one key encounter takes place offscreen.

The suspense builds instead from the developing revelation that there are more possessions going on than usual, with the interesting wrinkle that the evil presence leads the people around those afflicted to become trapped in their own dwellings. Something big is coming, tied to the fact that the story takes place in December 2012, when the Mayans (remember them?) had predicted the world would come to an end. As Eloy and Alba proceed toward their ultimate confrontation with that evil, Carreté intercuts scenes in a mental hospital, where patient Ona (Irene Montelà) also has an inkling of what’s going on, and is deemed a “witch” by those around her. Meanwhile, Ona’s sister Diana (Marta Belmonte) is a policewoman on Eloy and Alba’s trail, and a strange hooded figure in a black van is also stalking the pair.

There’s more going on here than one usually finds in possession potboilers, and Carreté and cinematographer Xavi Garriga drench the narrative (scripted by the director and Mike Hostench) in bleak visual style, sending the duo through sepia vistas and well-chosen locations, most notably a graffiti-strewn stadium. One awkwardly staged car wreck aside, Carreté does well by the violent moments too, though the movie is never the sum of its more graphic material; there are plenty of human moments between the two leads. Pons brings a quiet warmth to her understandably morose teenager, and Marco finds empathy for the committed Eloy, even as he’s bound to his obsessions and prejudices—the latter most notably expressed in a story he tells Alba late in the film, which says a lot about the chauvinistic traditionalism of certain faiths.

Even as the characters reveal themselves over the course of the story, there are hints dropped throughout that there’s still more to them than meets the eye, as quick flashbacks divulge that Eloy and some of the others were once part of some kind of hippie-ish cult. All is revealed during a finale that sheds a new light on everything that has come before, and concludes with a particularly resonant image. Those last 10 minutes are pretty strong stuff, even if the explanations don’t entirely hold holy water—though the only real disappointment is that once the film is over, we still haven’t been told what an “asmodexia” is.