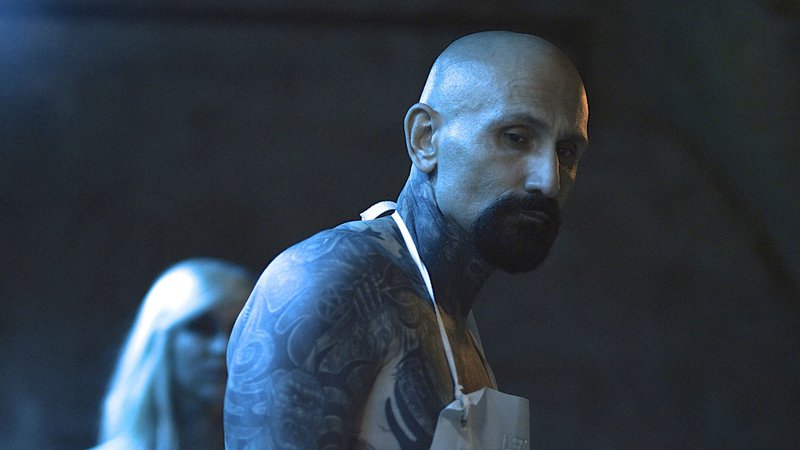 Editor's Note: This was originally published for FANGORIA on June 17, 2015, and we're proud to share it as part of The Gingold Files.

There were no boundaries when writer/directors Devon Downs and Kenny Gage set out to make Anarchy Parlor—in terms of explicitness or geographically. Below, the saga in their own words of making the torturous tattoo terror tale…

The idea for Anarchy Parlor came to us in a very organic manner. We have been writing together since 2001 and are both big fans of the horror genre, particularly realistically styled films such as Hostel and Audition. When it eventually came time to delve into our directorial debut, we knew we wanted to approach it from a place of realism, and create a world viewers truly hadn’t seen before. Having spent countless hours in parlors being tattooed ourselves, and developing a tremendous amount of respect for tattooing as an art form, we know there is a trusted bond created between the artist and the client, and this relationship is what became the basis for our movie.

The idea still needed a strong hook, though, and we had been reading an interesting yet macabre article about anthropodermic bibliopegy, the real-life practice of binding books in human skin. Despite the fact that this practice dates back to the 16th and 17th centuries, connecting the idea of art with flesh seemed very real to us today, and galvanized a lot of exciting concepts. Once we figured out the “what,” the most important piece was then the “who”…

Anarchy Parlor wouldn’t work if you didn’t believe in our villain “The Artist.” The two of us had been friends with actor Robert LaSardo for many years, and we knew right off the bat that this role was perfect for him. In fact, we wrote the script with Robert in mind, as he has the unique ability to charm and intimidate at the same time.

Still, a world needed to be created around this dynamic character, and with our love of classic horror films like The Texas Chainsaw Massacre and Halloween as inspiration, we wanted to build the framework around timeless genre traditions (e.g. teenagers in peril). It was very important that these kids seem familiar to audiences, but look and feel different enough to distinguish them as new and fresh.

We also spent a lot of time thinking about the movie’s stylistic aspects. Any fan of independent horror knows that most of it currently utilizes found footage or shaky, handheld photography to inject fear and a sense of the unknown into viewers. We wanted to break away from that approach and shoot things differently, allowing people to see as much of the environment and specific locations as possible, bringing them inside that world. After meeting with several directors of photography, we went with Edd Lukas, who thoroughly shared our vision and was the perfect fit.

When making your first feature, it’s a given that you probably won’t be able to get everything you want, especially if the film is produced on a tiny budget like Anarchy Parlor was. But we knew from the start that we wouldn’t sacrifice the quality of the project no matter what the budget was, and it made zero sense for us to fly halfway around the world to shoot on a soundstage. Originally, we were presented with a few other options abroad, but only Lithuania allowed us to shoot all practical locations for this movie.

With our big-budget dreams and actual microbudget financing, we set about putting the rest of the cast in place. The role of European tattoo apprentice Uta was very important; we needed to find a beautiful yet terrifying and believable actress who could hold her own with Robert, and found the perfect choice in real-life skin artist Sara Fabel. The character of Amy, our heroine, was to be the day to Uta’s night; to contrast Uta’s sexiness and scary ferocity, Amy had to be innocent and naive.

However, this wasn’t the case at first, as we originally imagined Amy as a heavily tatted college student who would be far more comfortable in this world. About a week before principal photography began, we lost the original actress who had been cast in the role, and as we searched for a replacement, producer Andrew Pagana sent us newcomer Tiffany DeMarco—the complete opposite of Sara. Tiffany was so ideal for the film that we wound up rewriting the role to play to this difference. It seems obvious to us now that Amy is really a stand-in for the audience, with the viewer needing to be able to identify with and root for her.

In a horror movie, every cast member is important, as the audiences has to either cheer for them to live or cheer for them to die in equal measure. Anarchy Parlor has a lot of satire in its storyline, and we needed actors who understood that and could play it straight. From the States, we brought on Jordan James Smith, Ben Whalen and Anthony Del Negro, but for authenticity, we saved some roles to be played by actual Europeans. We were also incredibly lucky to find the talented British players Claire Garvey, Joey Fisher and Beth Humphreys.

Now, let’s talk for a moment about the challenges of filming a microbudget film on location in Lithuania, where no U.S. horror film had ever been shot before. For starters, the crew consisted almost entirely of people who only spoke Lithuanian, so the language barrier between us was tough at times. There were also the challenges of firsts; our first feature as writer/directors, first acting experience for Sara and Joey, first American feature with a Lithuanian crew, etc. Not to mention the challenges of shooting a small-budgeted film on a tremendously large scale in only 22 days, while seeking out European actors and rewriting to accommodate last-minute American cast switches as well as location changes. Thankfully, the cast and crew were 100 percent game, and up for the challenges.

This was not an easy shoot, though; for example, Ben Whalen was stuck on that table for 12 hours freezing in his underwear. We learned a lot, and made many 11th-hour adjustments of the type required by budgets this small, but our team stuck with us and were entirely committed to getting the vision all on the screen. Our producers—Andrew, Bill Ceresia, Thomas Mahoney and Todd Slater—were tremendous.

Still, two production hurdles still haunt us to this day. We were extremely intent on ending the film with an incredible fight between Amy and Uta, and initially, we had written two pages of nonstop craziness between the girls. Incredible stunt players were hired to help choreograph the long back-and-forth brawl, and the actors were trained and ready to go. Our schedule for this scene was planned for a full day and a half, but as sometimes happens with indie filmmaking, there was a big misunderstanding with the location as to how much time we actually had to film. It turned out that we were only allocated two hours, not the day and half we had been counting on. Major adjustments were made, which is why the fight ended up being shorter than we anticipated. Therefore, we’re planning to release the digital pre-visualizations of the fight for all the film’s fans very soon.

For a pivotal scene with Claire Garvey as Kelly, we were supposed to have permits that allowed us to close a road to the public so she could be chased by a bunch of actors playing street kids. Our crew found out a few hours before that shoot that the permits only allowed us to film, but the area needed to remain open—so some guerrilla filmmaking took place! We both jumped onto the back of a truck along with our cinematographer, and went for it. Claire was a trouper and never complained about running barefoot in 28-degree weather. Due to the streets not being blocked off, some local bar patrons stumbled into the scene and tried to save Claire, who they thought was being attacked for real!

Once we brought Anarchy Parlor back to the States for postproduction, the real work began, since the movie required heavy visual FX. Our incredible editor, Ralph Jean-Pierre, understood what we wanted from the start and was able to achieve the balance of satirical beats and intense horror scenes. Stargate Studios (THE WALKING DEAD) created some of the most realistic gore gags we’ve ever seen, and King Sound Works made sure audiences couldn’t escape their impact even if they closed their eyes.

This journey that started with just an idea of what could be good, creepy fun has finally ended with 98 minutes of chills, frights and laughs, and we believe our goal was accomplished. Yes, it had a microbudget, and yes, it’s an independent horror film—but it certainly doesn’t look like it!