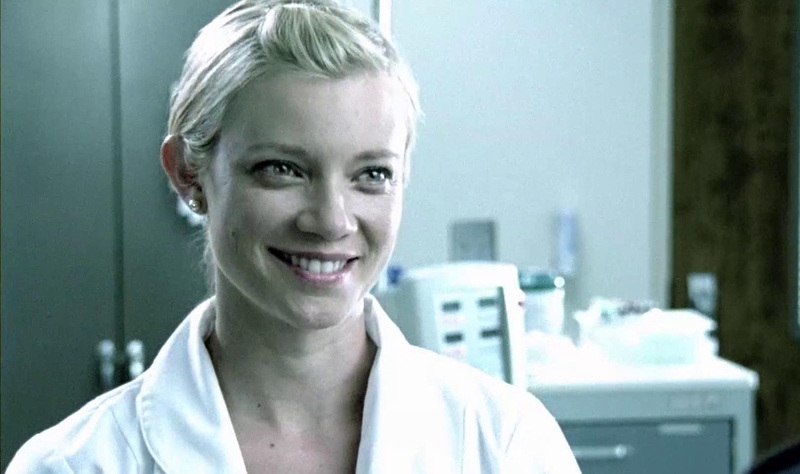 Editor's Note: This was originally published for FANGORIA on December 3, 2010, and we're proud to share it as part of The Gingold Files.

Actress Amy Smart has made a fresh and charming impression in a string of comedy features, from Road Trip to Rat Race to Just Friends, but her career also has a dark side. She had early roles in Campfire Tales and the Dee Snider vehicle Strangeland, and more recently appeared in Mirrors and Seventh Moon. Now Smart can be seen in the supernaturally tinged dramatic thriller Dead Awake (pictured above), and she took the occasion to discuss her many genre features with Fango.

Dead Awake, directed by Omar Naim, casts Smart as Natalie, the high-school flame of troubled protagonist Dylan (Nick Stahl). Once a guy with a promising future, Dylan was devastated by his breakup with Natalie and has wound up as an attendant in a funeral home, and after witnessing the crowds that attend the wake of a local football hero, he bets his boss, Decko (Brian Lynner), that no one would show up on the occasion of his death. But when they plant his obituary and Dylan is laid out in a coffin, two people do make appearances: Natalie, who’s currently engaged to another man, and a street junkie named Charlie (Rose McGowan). While Dylan has never seen Charlie before, the duo seem to share a strange—perhaps otherworldly—connection, and the more he gets to know her, the closer he gets to uncovering some frightening truths.

Smart joined the Dead Awake ensemble after Stahl and McGowan, and says, “After reading the script and knowing that Nick was playing Dylan and Rose was playing Charlie, I wanted to be a part of it. I’d seen Omar’s film The Final Cut with Robin Williams, and I found it such an interesting, original movie that definitely made me think about my life, and I loved his style of directing.

“I also really enjoyed the journey that Dylan goes on,” she continues, “because I believe all of us have these things inside us that hold us back, that sabotage us in our lives. To see him actively working that out, trying to figure out how to move forward in his life and his struggles and illusions—I like that journey he takes. There’s redemption in it, and the idea of letting go of the old and truly facing your fears, with the theme of souls being trapped and unable to move forward because they’ve committed certain crimes that keep them stuck in their own personal hell.”

As dark a journey as the characters take on screen, Smart recalls the five-week shoot in Des Moines, Iowa in September 2009 as far more pleasant. “It honestly was great,” she says. “We had such cool locations, because there’s so much history in Des Moines and we had great old buildings and different neighborhoods we filmed in. Also, when you’re on location, you have more of a bonding experience with the cast and crew, and that plays into the film. I worked with Nick on the first acting job I ever had, for MTV’s Rock the Vote; we hadn’t done anything together since, and it was wonderful working together again. I’d been following his career, and he’s so talented. He really throws himself into his roles full-on, and he’s not scared to take risks. He becomes so transparent and revealing with himself and his character. Rose was great, too; this role was so outside the box for her. She was really witty and fun and has a great personality, and I enjoyed playing off both of them.”

Dead Awake isn’t the first film in which Smart has played opposite a guy confronting alternate life choices in a paranormal scenario; she previously co-starred opposite a reality-bending Ashton Kutcher in The Butterfly Effect. The actress says she responds strongly to this kind of material: “As human beings, we all go through life making many choices every day and wondering, ‘Were they the right choices, were they the wrong ones, are they going to lead me closer to where I want to go?’ I really like movies that make you think deeper about your life.” Butterfly marked a major transition for That ’70s Show and Punk’d star Kutcher into more serious territory, and Smart adds, “We both loved the challenge of the script and playing these people in different realities. He was great; it was one of the first movies he was also a producer on, so he was very invested in it and took it seriously. It was complicated shooting all those storylines, especially out of order, but it was also rewarding.”

Something else Smart enjoyed about Butterfly was the huge prosthetic scar she sported as one of her character Kayleigh’s more down-and-out alternate identities. “I loved that; it grossed everybody out on set!” she says of makeup artist Toby Lindala’s handiwork.

Even more extreme facial disfigurement awaited Smart in Mirrors, Alexandre Aja’s remake of the Korean chiller Into the Mirror, which saw her suffering a literally jaw-dropping fate in a bathtub. “I did that movie because of that scene,” she reveals, “because I felt like if I’m going to do a horror movie, and I’ve done a handful, I wanted to do one of those classic [deaths]. Having prosthetics on your face that take hours to get on and hours to take off, and just the emotional intensity of shooting a scene like that, is exhausting; luckily, I only had to do that a couple of times, and I was so happy to experience it. It’s definitely the most intense death scene I’ve ever had to do, and maybe the most intense death scene I’ll ever have to do.”

Smart has overall positive memories of the Romania-based Mirrors shoot as well. “We filmed it in this old government building that had also been a boy’s school, and we were down in the basement, which felt haunted,” she recalls, adding that co-star Kiefer Sutherland “was really great to work with. He was so prepared and so professional and invested in his role. I was only on that for a couple of weeks, but it was really fun to work on.”

Coincidentally, Dead Awake’s Stahl wound up with the lead in this year’s direct-to-DVD sequel Mirrors 2, though Smart says she wasn’t able to compare notes with Stahl since Awake was shot first. Also a coincidence was the fact that she took part in two movies in a row with inspirations from Asian fright cinema; the other was Seventh Moon, a ghost story shot on location in Hong Kong by Blair Witch Project co-director Eduardo Sanchez. “That was crazy,” Smart remembers. “We filmed for seven weeks about 45 minutes outside of the city, and they’re very aware of the dead and spirits there. We filmed on these lands that had random graveyards and gravestones; people were buried all over the place. So we would have to do a prayer every night; everyone would get three sticks of incense and bow to the north, west, east and south, and bless the land before we worked on it that night so that the spirits wouldn’t haunt us.”

The actress doesn’t recall any specific spooky stuff visiting the production, though she says, “We were shooting all night, and there were moments when chills would run through you.” There was also a bit of a language barrier to overcome: “It was a Hong Kong crew who spoke very little English, so there were some translation errors, but they were the hardest-working people, and because we weren’t in the States, they kind of took over every job. The wardrobe person would help the lighting person, or this person would help that one if they needed something at the last minute. They were just so on it and passionate and efficient.”

All this horror stuff is well and good, but there are two films on Smart’s résumé that a current cult of fans (including this writer) are especially enthusiastic about: Crank and its sequel Crank: High Voltage, the deliriously over-the-top action flicks in which Smart plays the girlfriend of Jason Statham’s hard-charging bad-ass Chev Chelios. Shooting these anything-goes features by the writing/directing team of Neveldine/Taylor would seem to be a uniquely insane proposition, and Smart says, “On the first one, the script was pretty outrageous and it was all of our first time working together, and we didn’t know how the hell it was going to turn out. When it turned out so well, when the second one came up, it was like, ‘Let’s top it.’ So that one was even crazier, and it’s also so much fun working on a sequel in the sense of getting back together with people you really liked working with and who you already have a camaraderie with, and having another fun time.”

Those who love the Cranks are hoping that a third fun time is in the offing, and given both current cinematic trends and Neveldine/Taylor’s in-your-face style, it would have to be Crank 3D, right? “When we were shooting the second one, they were talking about doing a 3D one,” Smart confirms, “so maybe I’ll hear something soon. I would imagine they would probably want to do another film at some point.”

The actress, who performed most of her own stunts on the two Cranks, would be more than game for another sequel, having had a blast teaming with Statham before the filmmakers’ constantly in-motion hi-def cameras. “I loved working with Jason. On the first film, he was very protective of me because he’s so great at action, and I wasn’t, really. It was so new to me that he wanted to make sure I didn’t hurt myself. On the second one, there was already a level of comfort between us. We get along really well and we both don’t care if we make asses of ourselves, which helps.”

Neveldine/Taylor’s eccentric cinematographic methods, she adds, “really feed the scenes, because they’re so invested in the movie and its look and style that you feel their energy invested in you too, and it keeps things moving. It’s nice to have the directors shooting it themselves, because you feel like they’re with you and experiencing it first-hand, and they can give you good feedback.”

Having recently wrapped Blood Brothers, a screen vehicle for WWE star John Cena, Smart reports, “I’m about to work on a movie called House of the Rising Sun, which is an underground mafia/gangster story. Then there’s a film I might do called Glimmer, which is a really cool supernatural movie, so I’m waiting to see if that goes.” If and when it does, she’ll bring to it the commitment that she gives all of her roles, particularly those in the genre. “With horror, like comedy, you just have to go for it,” she says. “You can’t give a little and then take it back; you just have to fully jump into it.”