A Surreal Film for a Surreal World: Alex Garland and Jessie Buckley on MEN

"If I'm not being subversive, I'm wasting my time." 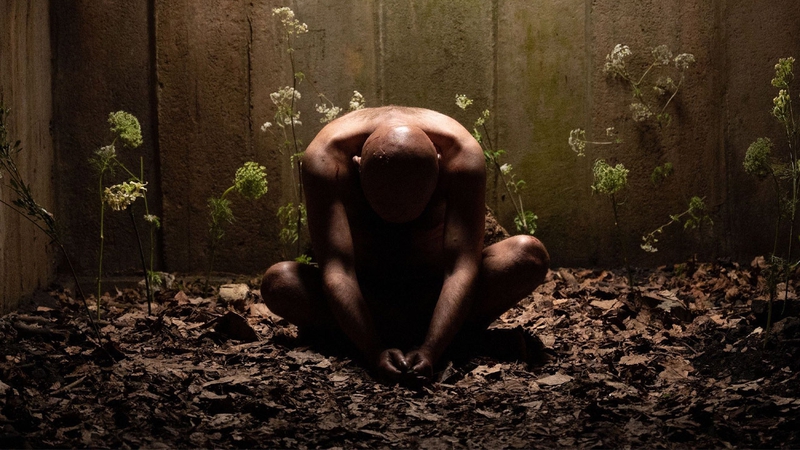 Alex Garland first brought his fierce and compelling vision to the genre scene with his screenplay for Danny Boyle’s 28 Days Later, and continued to bring his distinctive talents as writer and director of Ex Machina and Annihilation. Now he has taken a turn away from science-fictional themes with Men, opening Friday from A24, which deals more with psychological and folk horror, and then plunges into surreal body horror in the last act.

This might seem like new territory for Garland, though at a roundtable discussion of Men with his star Jessie Buckley, he notes, “I think I’ve always been making surrealist stuff, personally. In fact, I began as a novelist years and years ago; I was like 24, and when I think back on that book [The Beach, which became a Boyle-directed 2000 film], which is about backpackers in Thailand, there’s a lot of surrealist elements, and I believe there always are. It’s partly because I think life is really strange; people are strange and the world is strange and our interactions with each other are incredibly surreal, and sort of dreamlike and confusing. I’m shooting a film right now in Atlanta [Civil War], and we came across, by the side of the road when we were on tech scouts looking for locations, a bunch of abandoned Christmas decorations. Someone had set up a winter wonderland, and they’d gone bankrupt and this stuff was just scattered all over fields. I said, ‘Grab it, talk to the guy who owns the fields, let’s have it,’ and we used it as a backdrop. That is pure surrealism: You’re in Atlanta, in the hot sunshine, and everywhere’s covered in penguins and polar bears, and Christmas trees and elves. I didn’t create that; that was found in the world. I think Annihilation is full of surrealism, and Ex Machina; there’s a disco sequence in that, which is a surrealist beat. It’s slightly comic, slightly surreal, and that’s what I think the world is like.”

Certainly, the world Buckley’s Harper finds herself in over the course of Men is increasingly surreal, though hardly comic for her. Harper is looking to recover from the tragic death of her husband when she rents a lovely place in the English countryside, but the more she explores the surrounding area and encounters the locals, the more frightening her situation becomes. Yet no matter how extreme Harper’s terrorization, Buckley finds her to be a resilient protagonist.

“In some ways, Harper is somebody who is ultimately choosing life in some shape or form, even if that means facing the scariest thing she has to come to terms with,” says Buckley, who previously starred in the 2017 psychothriller Beast and got an Oscar nomination this year for The Lost Daughter. “And also, she’s being chased by all these monsters of some sort, but for me, there is something complicit in that she has agency within that. She isn’t a victim, she’s somebody who is actually walking toward that horror, instead of running away from it.” 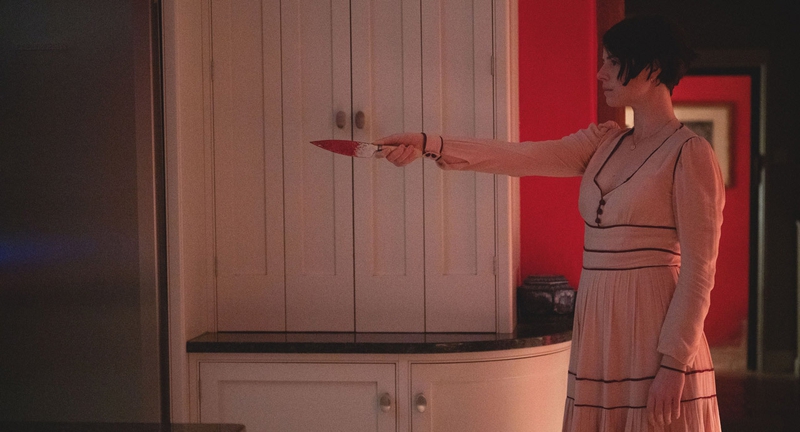 The horror takes many different forms over the course of Men, sometimes confounding and upending audience expectations — and that’s exactly how Garland likes it. “I feel if I’m not being subversive, I’m wasting my time,” he says. “I get really fucking bored by so much stuff, and it always makes me want to disrupt it and subvert it, and that’s how I keep waking up in the morning. The point of the film is to be playful and irreverent, and sometimes use genre conventions but also be aggressive, and sort of disruptive. For me, the dream is that somebody watches this movie and does not simply forget about it while they’re walking out of the cinema. Films are often weirdly forgettable; somebody will say, ‘Have you seen that?’ and I go, ‘Yeah, yeah, I’ve seen it…’ And they’ll say, ‘Did you like the bit when…?’ and I already don’t know what they’re talking about, right? I want the movie to stay alive, to be a participant in a conversation.”

As anyone who has seen the trailer knows, Men’s biggest conversation piece is the casting of accomplished actor Rory Kinnear (Penny Dreadful) as all of the men surrounding Harper in her new environment. He’s credited only with playing Geoffrey, the eccentric owner of the house she rents, but also appears as a threatening visitor, a sinister, insinuating priest and other characters — human and inhuman. For Garland, the choice of “a highly respected actor” like Kinnear to take on the multiple parts was an obvious one, but he wanted the meaning behind the use of the doppelgangers to be elusive.

“There are all sorts of ways of making movies in terms of how many questions you can answer,” Garland says. “Film typically wants to answer all questions that it poses, and I’m a lot less interested in that. So you have one actor playing all these roles, and it’s obviously not arbitrary. It’s not that all these characters happen to look the same; there’s obviously a decision being made. So one question might be, does Harper see all men as the same? Because neither Harper nor the film ever remark on it, ever. It’s only the viewer left to remark on it. So is it that Harper sees all men as the same, whilst they are in fact different, or is that all men are the same, and she doesn’t see that? The way I see it, those are two questions that sound very similar, but have completely different inferences.” 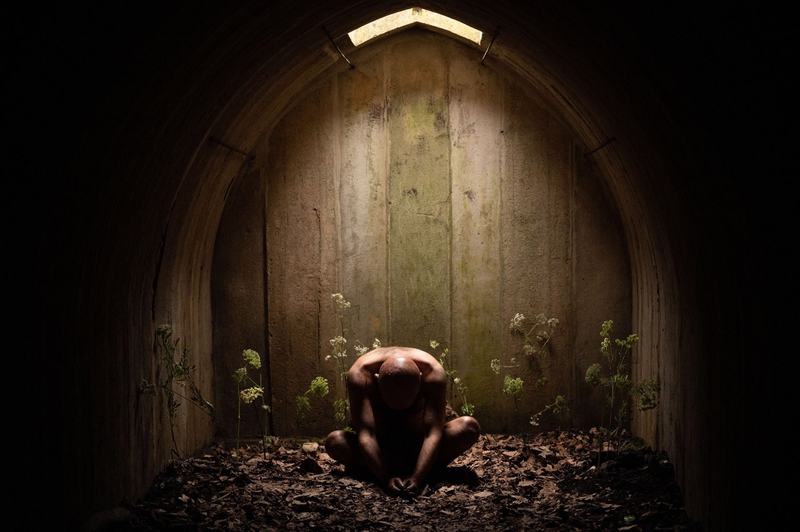 One thing Buckley is sure of is that Kinnear’s skill at pulling off the multiple characters made for a memorable filming experience. “I have no idea how Rory did that; it’s sheer genius what he’s done,” she says. “Every time he would step on set as a new man, the whole tone and mood on set, not just with me but with the whole crew, would change. Like when Geoffrey came into the room, it was party time [laughs]; there was a lightness about Geoffrey, and we all absolutely loved him. But when the priest came on, it was quite scary; there was a sharp undertone to him that felt unnerving. That’s a testament to Rory as an extraordinary actor, when you have somebody like him who is so brilliant, it’s such a huge feat and such a delicate and quite bold line that he had to thread every single day. And it was seamless, where you felt like whoever came on set, that was who was in front of you; it was never Rory being that person, it was just absolutely that person. That trickled out through the whole crew and cast when we were doing it. When you’ve got somebody like Rory, it’s very easy.”

Part of the overall process of making Men, Garland adds, was keeping things open to whatever opportunities came up. This applied to “the whole of the filmmaking process,” he says, “from preproduction to shooting and then in the edit — staying alive to the possibilities and [potential] changes and not letting things get concretized. There are different ways of making films; some people board everything and execute the storyboards and have an incredibly clear idea of what’s going to happen. I don’t; I say to the actors in the rehearsal stage, ‘This script is still fluid and open, and we can make changes and find stuff.’ I go out of my way to make sure that remains true during the shoot, and then in postproduction.”

Ideas can come from anywhere when making a movie, including films in similar genres. Yet while Garland acknowledges that he took occasional inspiration from antecedents both obvious (The Wicker Man) and not so much (Attack on Titan), he says, “I try to avoid making movies about other movies. I’m aware that other films will filter into the thinking; in Men, there’s a first-person running shot toward a house, and even as we were setting up, I thought, ‘Oh, yeah, Evil Dead,’ right? So that happens, but I’m not doing knowing nudges and winks toward the audience; it’s more like straight-up influence. Which is borderline theft, you could say, or unconscious theft, but I really do avoid doing that. I always think that filmmaking is a very broad church, and I know a lot of movies are incredibly keen to be referential and knowing to other movies, and I get that and it’s fine and I’m not criticizing it, but it’s not something I want to do. I’ll make films with an awareness of other films, but I try to make the movie about something not to do with cinema — something in the real world.” 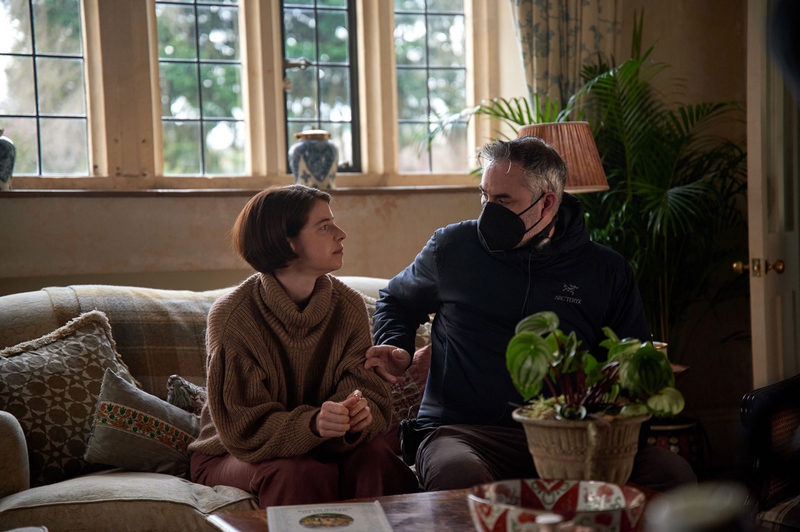 The real world in recent years has been very much concerned with the fraught relationship between men and women, and Men, for all its mythological and hallucinatory elements and imagery, is very much rooted in those concerns. Gaslighting and shaming are a part of Harper’s ordeal, and Men will no doubt ignite debate and perhaps controversy; during the roundtable, the possibility comes up of Garland receiving criticism from some quarters for depicting men in a far-from-positive light.

“I’m aware of the sensitivities,” he says, “but I also think sensitivities are dangerous, because they can prevent people from saying anything, or trying to join in a conversation, and that seems to me a shame, and to be anti- what our job is. Joining in a conversation as thoughtfully as one is able to do — so it doesn’t mean one gets everything right, but that you try as hard as you can—feels necessary to some degree. Those were the parameters we gave ourselves, pretty much.”