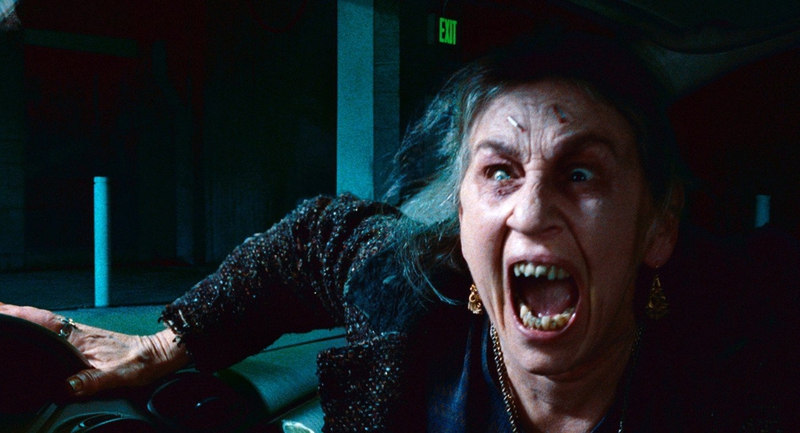 For horror fans, it's a familiar and welcomed sight: A wooden door left slightly ajar appears on the screen. Suddenly it slams shut, seemingly on its own. Then the camera moves toward the door's keyhole, and as we peek through the opening, a skull leaps into view, and the words "Ghost House Pictures" materialize.

Founded in 2002 by genre legend Sam Raimi and producer/Xena: Warrior Princess co-creator Robert Tapert, the horror film production company has released some of the genre's best-known entries. Twenty titles have flown under their banner, with the long-awaited Evil Dead Rise set to be the latest. To celebrate their two decades in the business, here's a list of eight of their most essential flicks (along with a few honorable mentions). Some are acknowledged classics, while others are minor bangers deserving of a revaluation after initially being missed or dismissed. All are highlights from a solid twenty-year run of nightmare-making. 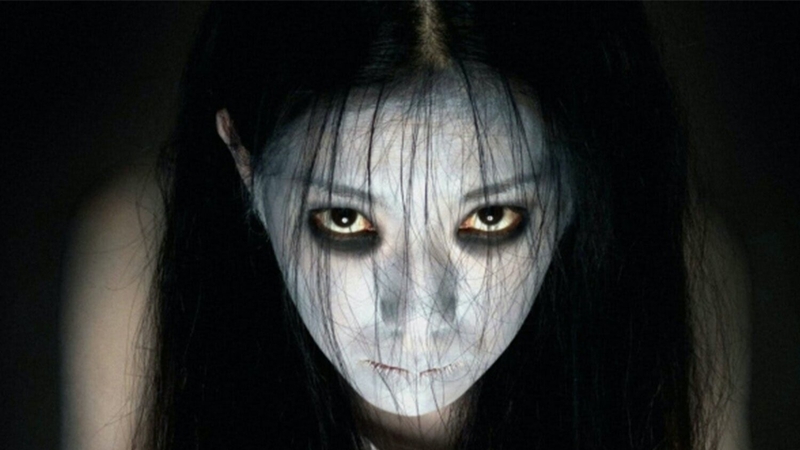 Ghost House's inaugural picture, The Grudge is an interesting entry in the slew of J-Horror remakes that erupted from American studios in the early aughts. Unlike its predecessor, The Ring, whose success officially kicked off the craze, this retelling stays on Japanese soil (though its story is told from the point of view of a few American ex-pats). In addition, Takashi Shimizu, the writer/director of the original Ju-on franchise, was brought on to direct the film. The final product is a little uneven and perhaps not as effective today as when it debuted nearly twenty years ago, but there's a nostalgia connected to the movie for fans of a certain age whose introduction to horror was Kayako's shudder-inducing croak. 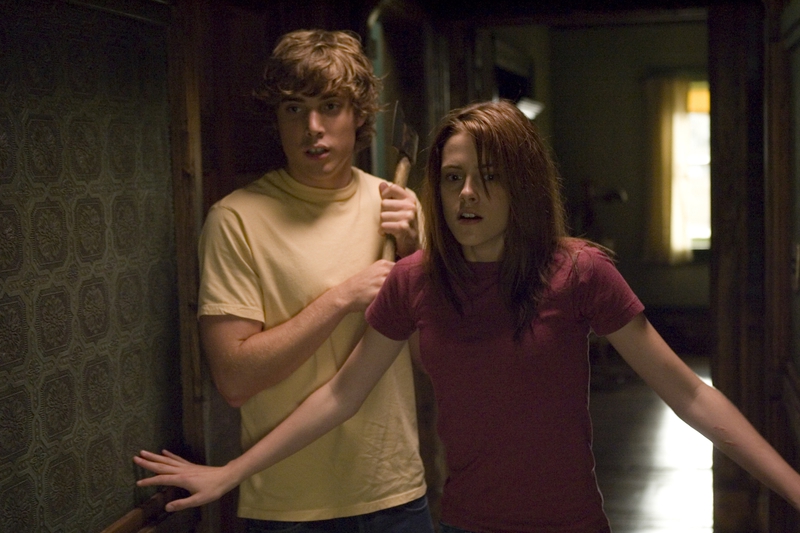 The Messengers is the definition of a mixed bag. The film went through several rewrites (the prequel released two years later, Messengers 2: The Scarecrow, was actually based on the original script before being hacked to bits), which explains the disjointed narrative. It also sports some traits that can make mid-aught horror feel dated, most notably some crummy-looking CGI and an overreliance on jump scares. So, why is it included on this list? For starters, this haunted house picture has some straight-up terrifying sequences of ghostly mischief that feel akin to some of the scares James Wan would craft years later in the first two entries of the Conjuring franchise. Directed by the Pang Brothers (The Eye, Bangkok Dangerous), the film has an inventive and unique visual style for its time. The Messengers also has a surprisingly nice score, which isn't all that astonishing when you see that composer Joseph LoDuca of the Evil Dead franchise was its creator. Finally, for all you KStew fans out there, it features an early leading role from Kristen Stewart. 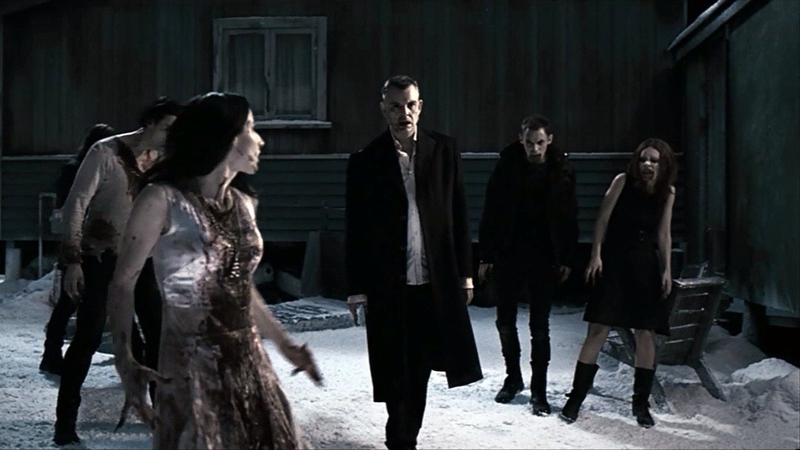 Based on the hit comic book by the dynamite creative team of Steve Niles and Ben Templesmith, 30 Days of Night made vampires scary again. Removing the romantic aura that had effectively defanged the monster by that point, the bloodsuckers featured in the film are cruel, remorseless, killing machines. Coupled with this frightening new approach is an idea so ingenious it's hard to believe it took that long for someone to think of it: What if vampires descended upon a town in one of the northernmost regions of the globe that experienced weeks of complete darkness? Would its unique geography result in an all-you-can-eat human buffet for the vamps, or would the members of its community mount some sort of counterattack against the beasts? Now put that premise in the capable hands of director David Slade and throw in the hunky visage of Josh Hartnett, and you've got yourself a gem of a picture. 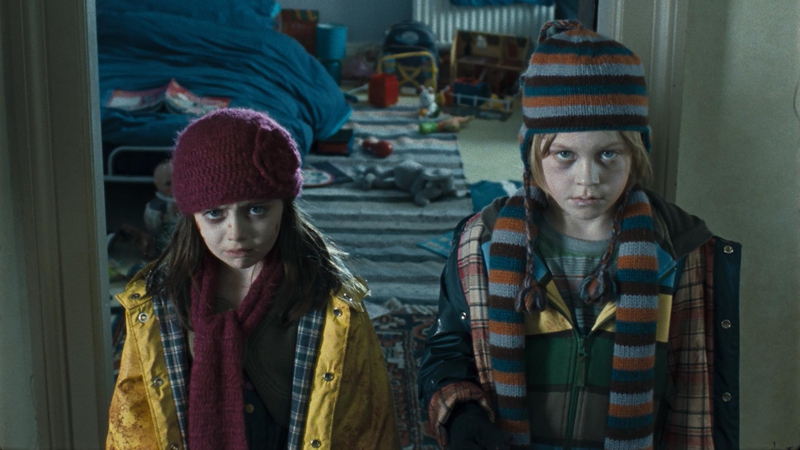 In 2008, Ghost House launched Ghost House Underground, a film acquisitions company that sought to bring new independent horror offerings to the home video market. Fifteen titles were released during the label's three-year run, and writer/director Tom Shankland's The Children was by far one of its most memorable. Centered around a family vacation that turns into a nightmare when a virus turns its kiddos into homicidal maniacs, The Children is a brutal piece of psychological horror that takes elements of the slasher and zombie subgenres and creates a uniquely terrifying viewing experience. It will stick with you long after the film has finished (especially if you happen to be a parent) and also includes a delicious knee-slapper of a tagline: "You brought them into this world. Now they will take you out." 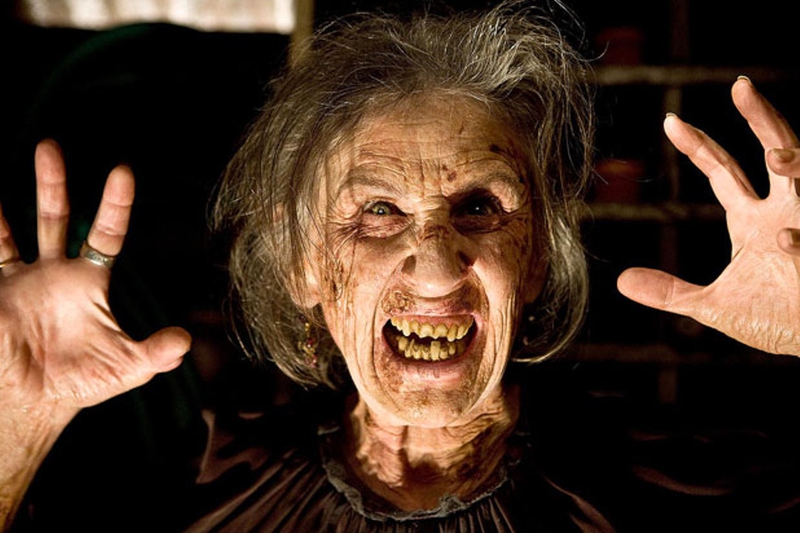 Marking the triumphant return of Sam Raimi to the genre that helped establish him as one of film's most exciting directors, Drag Me to Hell is a delightfully satisfying piece of horror. Its story is simple but effective: A young woman fights to find a cure for a curse placed upon her, lest her soul is, well, dragged to hell. Everything in Raimi's horrific bag of tricks gets hurled at us in this picture, from his frenetic camera work to his trademark mastery of the gross-out gore gag. It also has a wonderful score by legendary composer Christopher Young and a surprisingly bleak ending that still hits you hard in the gut today. While its CGI has aged almost as poorly as its stereotypical depiction of the Romany, Drag Me to Hell is still a must-watch in Ghost House's filmography. 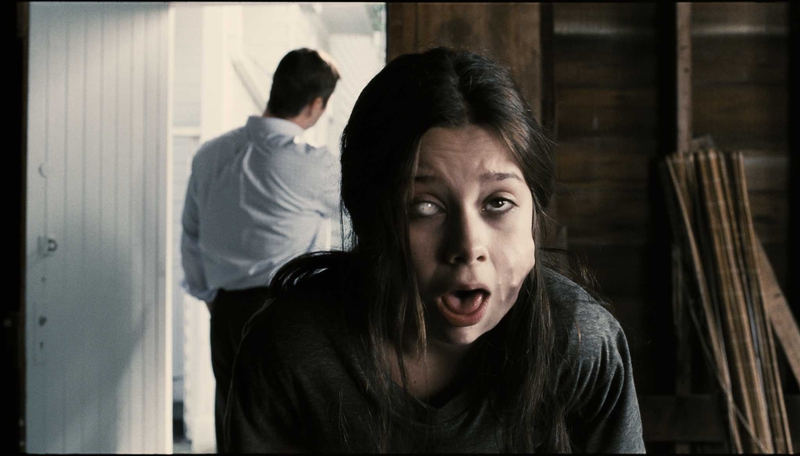 It tends to get lost in the innumerable exorcism films studios were regurgitating at the time, but The Possession was actually a pretty solid entry in the subgenre. Inspired by the 2003 viral story of a supposedly haunted wine cabinet that was being sold on Ebay (its owner would later recant his story, essentially saying he did it for the lulz), the film follows a similarly cursed box that a family buys at a yard sale. The demonic baddies inside end up relocating into the soul of the youngest member of the clan and spooky hijinks ensue. While The Possession doesn't reinvent the wheel in terms of the tropes too often seen in the countless movies attempting to spider-walk in the footsteps of William Friedkin's The Exorcist, it doesn't need to, thanks to the strength of what it does well. It has an undeniably creepy atmosphere, presents sympathetic and believable characters, and showcases some genuinely unsettling imagery. 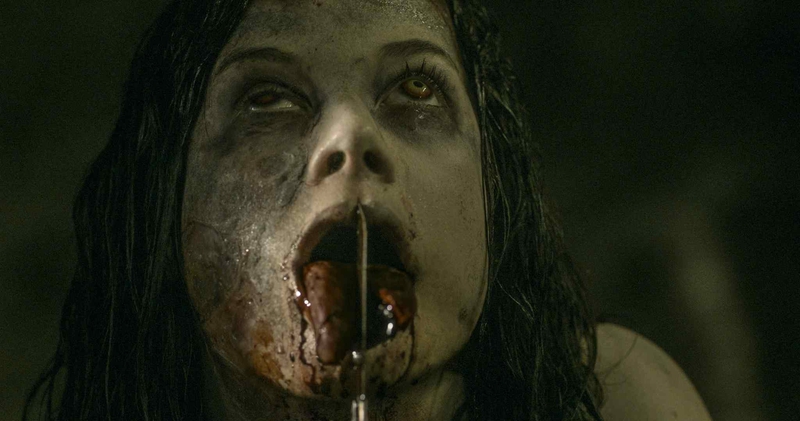 Easily the most divisive entry on this list, Fede Álvarez's reimagining of Sam Raimi's signature film is thankfully finally getting recognized as one of the best remakes in horror history. Looking back at some of the insanely negative responses Evil Dead received (I specifically remember one prominent podcast at the time ranting for an entire episode about how much of a sacrilege the film was), you can't help but scratch your head a bit. It honored the original's tone and esthetic beautifully while giving us a film that truly felt like its own unique beast. A masterful balance of ambition and fan service aside, it also sports some of the best gore effects seen in years (I still can't see an X-Acto knife without thinking of that scene) and a lead that could have filled Ash's shoes nicely if she'd been given the chance. What more could you want? 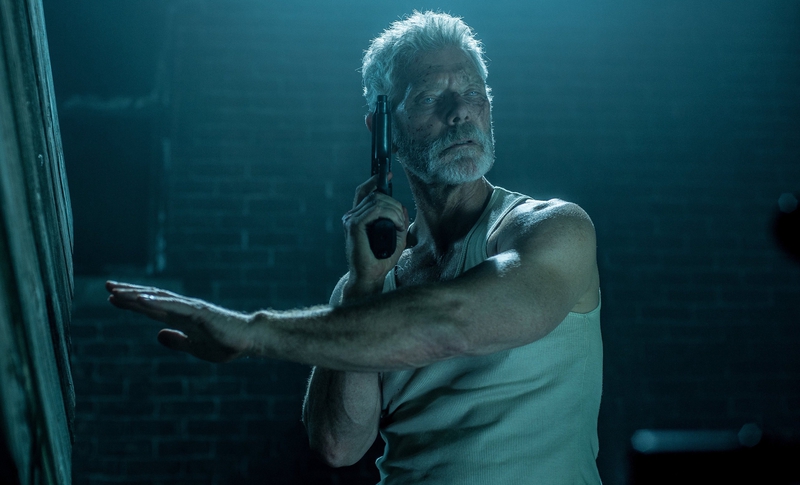 Three years after Evil Dead, Fede Álvarez returned to the big screen with a film that would prove to be Ghost House's biggest hit since 2004's The Grudge. Continuing the filmmaker's penchant for crafting stories that drip with suspense and brutality, Don't Breathe tells the tale of three young burglars hoping for a big payday when they break into the home of a wealthy blind man. Unfortunately for them, it turns out the house's owner is a killing machine who's more than capable of dealing with the unlucky trio who are now locked inside with him. With a deeply chilling performance from Stephen Lang as the homicidal homeowner and a climax so unexpectedly gnarly it made this writer's skin crawl, Don't Breathe snuck up on audiences upon its release and became one of Ghost House's highest-grossing pictures to date. 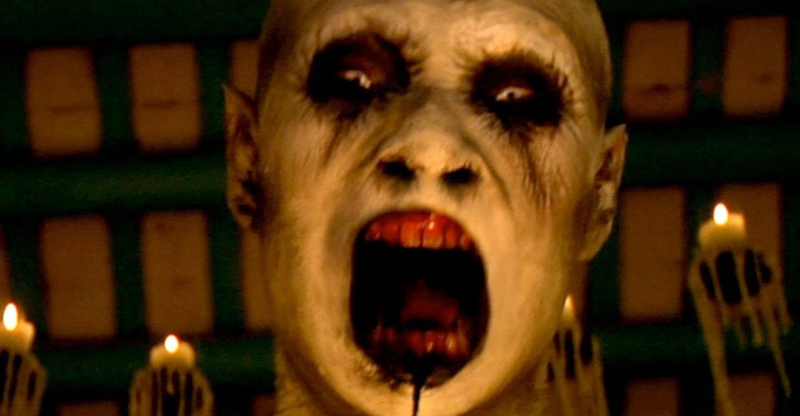 Another fun one from Ghost House Underground. If you can ignore its truly agonizing use of shaky cam, you'll find a spooky piece of folk horror with a surprisingly emotional finale. And for a movie whose biggest flaw is its camera work, its final shot is an absolute stunner. To quote David Johansen in Scrooged: "Niagara Falls!" 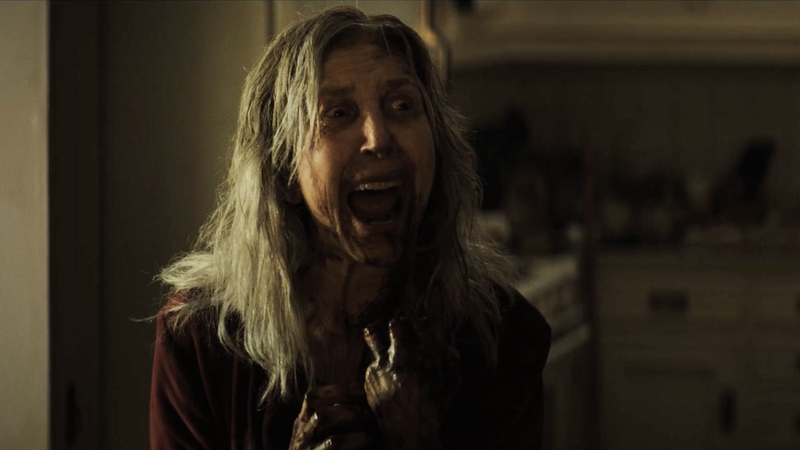 I'm genuinely baffled by the hate this movie received. True, it did away with Kayako, but the spirit of the franchise and its mythology was all there, along with gorgeous art direction and some deeply emotional performances from its ensemble cast. I will die on this hill; however lonely an end it may be. 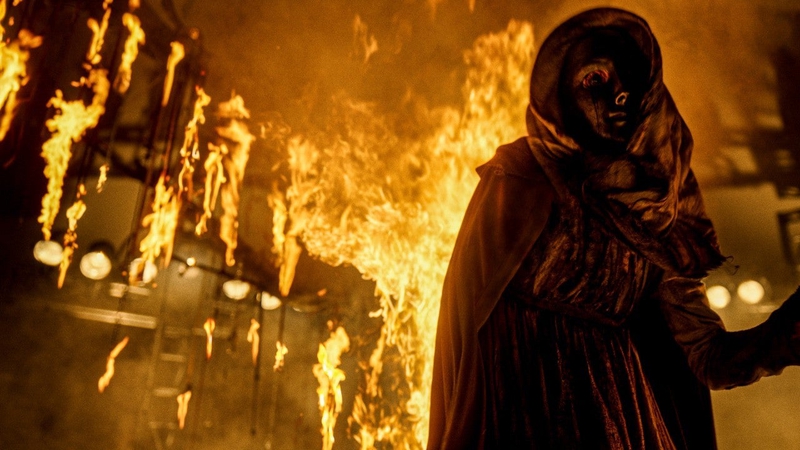 This one surprised me. It relies too heavily on jump scares and has a third act that crashes down quicker than Wile E. Coyote plummeting off a cliff, but The Unholy also has a neat little story that attempts to examine the nature of belief and the commodification of faith. And its creature design is actually pretty darn gnarly, to boot!