Scarred For Life: Halfway to Halloween

More notable names in horror share the formative films that messed them up! 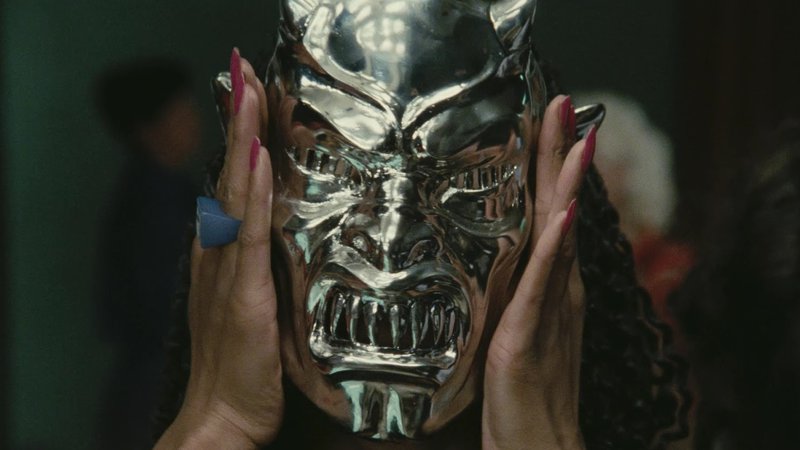 Halloween may be six months away, but you would never know it. Theaters, streaming services, VOD and disc companies are overflowing with horror content. So, for this edition of Scarred For Life, we check in with the current crop of frightmeisters to see what unsettling horror films traumatized their young psyches and set them on the fast track to terror. (Read the rest of the entries here.)

Our last two contributors this edition, multi-hyphenates Jeff Lieberman and William Butler, have new print autobiographies out now that further explore their careers in fear – you can check them out at the links below!

“I saw the movie Bad Dreams [1988] when I was very young. I was 7. I was over at a friend’s house, and his mom let me stay up late and watch it with her because I couldn’t sleep. It didn’t help. There’s a lot of scary, intense images and ideas in that movie that I was previously unfamiliar with: suicide cults, self-mutilation and an actual burn victim, Richard Lynch, playing a scary burn-victim ghost. Years later, having subsequently enjoyed a couple dozen other fine Richard Lynch movie villain performances, I purchased Bad Dreams on Blu-ray and was surprised to discover it definitely has a sense of humor and is far sillier than I’d realized. I liked the movie, but it was not the grim, harrowing nightmare of my childhood memories. But that’s the fun of realizing what cinema scars us: I am now a voracious viewer of horror cinema, of course, but no punishing extreme horror endurance test has ever hit me as hard as Bad Dreams.”

Jon Huertas, actor (This Is Us, Castle, Elementary and Initiation, now in theaters, digital and VOD)

“Children of the Corn [1984] shocked the hell out of me. I went with a group of new friends who didn’t tell me it was a horror film, and we ended up being the only five kids in the dark theater watching the film. I couldn’t make myself small enough in that chair so that I wouldn’t be seen by the killer, who I just knew was gonna wander into that cinema. To cap the whole traumatizing experience, I had to ride my BMX bike home by myself that night across town in the dark through haunting tree-lined streets. I didn’t watch horror films for years after that, and to this day, hate riding a bicycle down a dark tree-lined street.”

John Berardo, director (The Labyrinth and Initiation, now in theaters, digital and VOD)

“Scream [1996]. I’m a hardcore fanboy. Every college entrance essay asked in some form of a question, ‘Describe the most emotionally-intense moment of your life,’ and my essay was always the same detailed prose of the first night I saw Scream. I was obsessed. Sidney Prescott was my superman. It was disturbingly violent, and I was 11 years old, so it scared the hell out of me. We’re talking nightmares for weeks, but I loved the characters and the stories. These are weird feelings we have as kids when we’re exposed to media like that. It’s hard to articulate when you’re younger, but after finishing Initiation, my inspiration from Scream isn’t only undeniable, it’s celebrated.”

“I remember watching Lamberto Bava’s Demons [1985] on a summer’s day at a friend’s house. Must have been 15 or 16 at the time. Watching on VHS. And it was hot, so the only snacks in the house, a particular English candy bar called Kit-Kat, had gone soft and started to melt. The association of watching that movie, with its excessive quantities of pus, combined with eating melting candy bars, scarred me for life. I’ve barely touched a Kit-Kat since, and if I ever do, it takes me right back to that hot afternoon, Demons and pus. Nice!”

“When I was 11, I saw two movies that left me traumatized. The first I saw by chance. I couldn’t sleep, and I crept downstairs while my family was asleep and switched on the TV. They were showing Ingmar Bergman’s Cries & Whispers [1972], and it was the scene where one of the sisters, Liv Ullmann, dreams that she is talking to her dead sister, who then lifts her dead arms and tries to kiss her. It ends with Ullmann running from the room screaming. It was the most terrifying thing I had ever seen up until that time.

“The second was that scene in Tobe Hooper’s Salem’s Lot [1979], where the dead boy scratches on the window saying, ‘Let me in.’ It is a marvelous, brilliantly conceived scene, but both of those movies hit me extra hard because I had just experienced the death of someone very close to me, a boy about the same age as the boy scratching at that window. So, the fear I felt watching them felt very personal. This event and those movies changed my life, and everything I have done as a filmmaker since has come from this terrible event and the experience of watching those films so soon after. Making my movies has felt partly like a cathartic experience for me, a place to work through fears and childhood memories.” 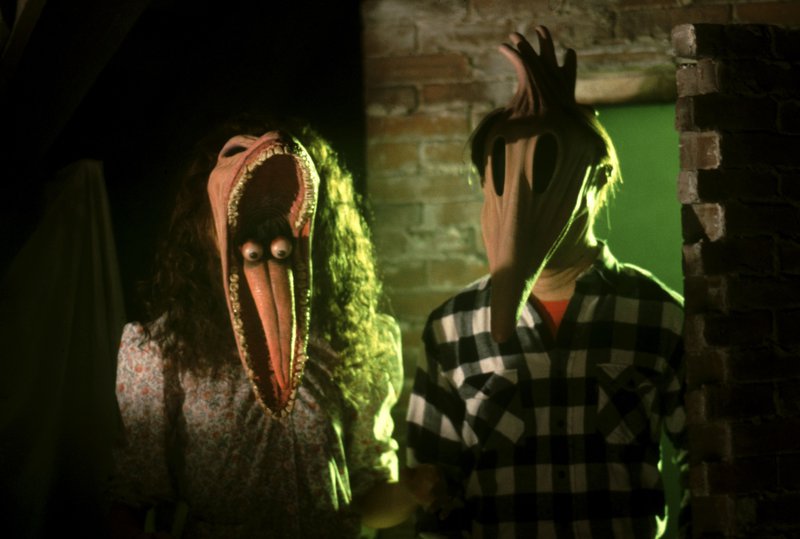 Zach Lamplugh, director (15 Things You Don’t Know About Bigfoot [#1 Will Blow Your Mind!], now in theaters and VOD)

“The film that’s forever burned into my little kid brain is Beetlejuice [1988]. And I mean really little. I saw this when I was about six, and the Claymation just rubbed me the wrong way. Of course, it looks cheesy now, but when they get chased by those giant Claymation sandworms, that creeped me out. And the other part that really got me was when they deform their heads in an attempt to scare the new family; Geena Davis’ eyes are in the back of her throat, and Alec Baldwin stretches his skull and has eight or nine eyeballs on his fingertips. Looking at it on Google Images still creeps me out (oh, God, I forgot about the shrunken-head waiting room thing). Of course, I was way too young to understand the plot of the movie or the characters’ arcs, because after revisiting Beetlejuice as an adult, this is one of the more charming and funny horror comedies of that era. A newly-deceased couple finds themselves tasked with haunting their own home and scaring away the new residents, but they’ve got one problem: they’re too darn nice. It’s the perfect machine for jokes about being a ghost. And you can bet I’ll be showing this to my kids when they’re too young to understand it, so they too can be kept awake at night by Beetlejuice eating that fly.”

“I got mesmerized into loving horror by Romero’s Night of the Living Dead, but the movie that buckled me down and sent me into overdrive was Raimi’s Evil Dead [1981]. It was 1990, I was 10 and to me it was bonkers! It showed me what ‘no holds barred’ meant. The creativity, the insanity, the unapologetic nature all got me beyond excited as to what the horror genre had in store for me. I lied to my parents about the rating of the film so they would not object when my cousins rented it. And at the end, I had a smile from ear to ear. It gave me a few nightmares, but nothing that I didn’t laugh off the next morning.

“I needed to see everything after that, The Fly, Nightmare on Elm Street, The Stuff, Chopping Mall, Hellraiser… I was hooked. I was lurking in my video store deciding on what latest crazy movie was going to make me feel what I felt when I saw Evil Dead. Then, as the ’90s rolled on with their brand of horror, I was so receptive, and [Evil Dead] is the reason I fell in love with movies like Dead Alive. I hope all this early-onset horror addiction can be felt in Sound of Violence and that my film will, in turn, inspire someone to delve head-first into this magnificently creative genre like I did.”

“I was fixated on David Cronenberg’s The Fly [1986], even if it didn’t really scare me. Jeff Goldblum as Seth Brundle gets drunk and attempts to operate the telepod device, and he finds himself merged with a fly. As time goes on, the fly doesn’t need certain body parts anymore. When I watched it as a kid, it scared the shit out of me as my older brother Gavin always said to me, ‘[Brundle’s] dick fell off.’ And you can see his dick in a jar in the medicine cabinet. I remember trying to pause it on VHS, but back then you couldn’t see shit when you paused on video. And I just couldn’t get my head around the fact that he didn’t have a dick anymore. Scary stuff.”

“The movie that scarred me would have to be The Incredible Shrinking Man [1957]. The government was scaring the youth of America to death on a daily basis with both propaganda films on the impending atomic war with Russia and ‘duck and cover’ drills in public schools to prepare us for that sudden bomb blast that would either fry us instantly or mutate us, causing hideous deformities. So, Hollywood took full advantage of this fear being instilled in American youth and made a long series of ‘radiation movies.’ To the 10-year-old me who was working hard to grow up to be a man, the idea of shrinking was just terrifying, and director Jack Arnold delivered the goods. After seeing the movie, I was so convinced I was shrinking, I had my mother measure me every morning!”

“The film that had a huge impact on me was by far The Innocents [1961] starring Deborah Kerr. I was absolutely afraid to breathe during all those scenes where Kerr would wander the halls of that exquisitely scary manor. That combined with the questions – Was the nanny crazy? Were the kids possessed by the former help or was the place just haunted? – left an indelible mark on me that to this day still influences my writing and directing. The film terrified me without one monster or a single drop of blood.”