Wild Women with Steak Knives: THE BOY FROM HELL 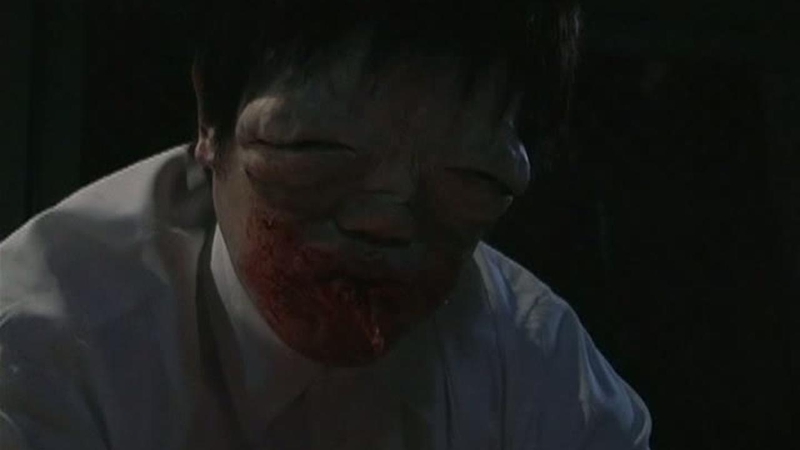 Mari Asato’s “The Boy from Hell” is an episode from Hideshi Hino’s Theater of Horror which I believe is on sale at Amazon in ye olde DVD format. It’s not particularly easy to find, so what follows is very much a spoiler-free taster.

Let’s be clear: I have absolutely no discomfort whatsoever declaring that Mari Asato is the queen of J-horror, and yet for some reason, she’s not a household name. She is straight-up one of my favorite horror filmmakers from that part of the world, although she is in no way an ‘auteur’ in the most pompous sense of the word; she gets in, gets the work done, and gets the hell out. But the economy of her work to my eye allows her enormous flexibility in terms of the kinds of films she has made. Across all her movies, there seems to be a sense of real freedom, of not being locked down or pressured by what her audience might expect of her; the good thing about not having a brand, I guess, is that you face absolutely no assumptions that you have one to live up to.

This could very easily turn into a piece just on Asato herself, but in short, she’s in her mid-40s and began her career working for directors like Hiroshi Takahashi (Sodom the Killer) and another of my Japanese genre favorites, Kiyoshi Kurosawa (Barren Illusions). As a director, her credits in horror include the absolutely demented clown horror movie Twilight Syndrome: Dead Go Round from 2008, Ju-On: Black Ghost from 2009, the Bilocation films in 2013 and 2014, but my favorite of hers - in fact one of my favorite Japanese horror films full stop - is her 2014 adaptation of the famous horror video game Fatal Frame. A film that seems to actively reverse the gender politics of the original game, think Peter Weir’s Picnic at Hanging Rock meets Peter Strickland’s The Duke of Burgundy and, in terms of aesthetics at least, you start to get a sense of that film’s general vibe.

But what I want to talk about here is the 2004 Asato-directed “The Boy from Hell” (Jigoku kozô), a one-hour episode of the television series Hideshi Hino’s Theater of Horror. This is a six-part horror anthology series, with other directors including Yoshihiro Nakamura and Kazuyoshi Kumakiri, but of course the big drawcard here is Hideshi Hino himself, who introduces each episode Alfred Hitchcock Presents style (just with less hype about throwing to his sponsors, settle down Alfred you big eggy corporate bastard – we see you). As the title suggests, each episode is an adaptation of Hino’s many horror manga (Hell Baby forever!), and Hino of course has his own background in horror filmmaking too, a polymath who amongst many other things wrote and directed two of the notorious Guinea Pig films, Flower of Flesh and Blood (1985), and Mermaid in a Manhole (1988).

So where to begin with the absolutely demented “Boy From Hell”? To go the chronological route, we begin with a seemingly idyllic family car ride with the elegant, successful Setsu (Mirai Yamamoto), a surgeon, who dotes over her young son Daio (Mitsuru Akaboshi). Within moments it all goes a little pear-shaped as the young boy is decapitated when he puts his head out of the car window; a special shout-out here to user Astrid Rose on Letterboxd who accurately employs the word “hereditaried” to describe this, as there is simply no better word to describe it.

But unlike Hereditary, there’s something altogether more slapstick - even camp - going on here. With her enormous Jackie O style bouffant, Setsu’s sanity starts getting a little wobbly, and she is pushed over the line completely when a strange disheveled witch-like character enters the equation and tells her that the way to get her son back is to find a boy the same age as her own son was and slit his throat with a special claw she gives Setsu, dripping the blood on Daio’s grave.

Declaring that “medical science was no help” to her decapitated son, Setsu decides to give it a red hot go as she has a seemingly endless supply of dying kids at work she can happily sacrifice. The good news is it is a success; the bad news is Daio doesn’t exactly come back as she remembered him. Hence the title - gone is her charming, sweet little boy, and in his place is a mutated cannibal demon, risen from the unholy depths.

It is an understatement to say that “Boy From Hell” is far from the most sophisticated, probing film about the experience of motherhood - this is trash in its purest and most gleeful form, and aggressively proud of it. But what is perhaps much more exciting about this very early horror work from Asato is how voraciously she indulges in the thoroughly over-the-top film style that horror allows. We have references ahoy here - from the overtly Argento/Goblin-inspired soundtrack to the Carrie-like hand that shoots through Daio’s grave when he is first reanimated, as the film progresses the most overt reference seems to be Nobuo Nakagawa's classic Japanese horror film Jigoku.

As the episode develops, what at first seems like a cringey infatuation with green-screen in “The Boy from Hell” is revealed to be a conscious, determined stylistic choice as the netherworld that demon-Daio comes from merges more and more with the earthly reality where his desperate mother remains. Combined with this are some really genuinely beautiful painted backdrops and we soon realize that what Asato has crafted here is trash, yes, but also a really gorgeous and quite jaw-dropping love letter to Japanese horror history itself (there is surely a bit of a nod towards Hausu director Nobuhiko Obayashi’s work in here, too).

If story is your thing with horror, this is not for you - the not-so-subtle nod to Argento through the soundtrack alone makes it perfectly clear Asato is far more interested here in spectacle and sensation than deep, probing characterizations and sophisticated plot. But it’s difficult to describe just how extraordinary a spectacle “The Boy From Hell” turns out to be. Along with Asato’s work more generally, this is worth chasing down, and I suspect it won’t be the last Wild Women with Steak Knives column dedicated to her work….