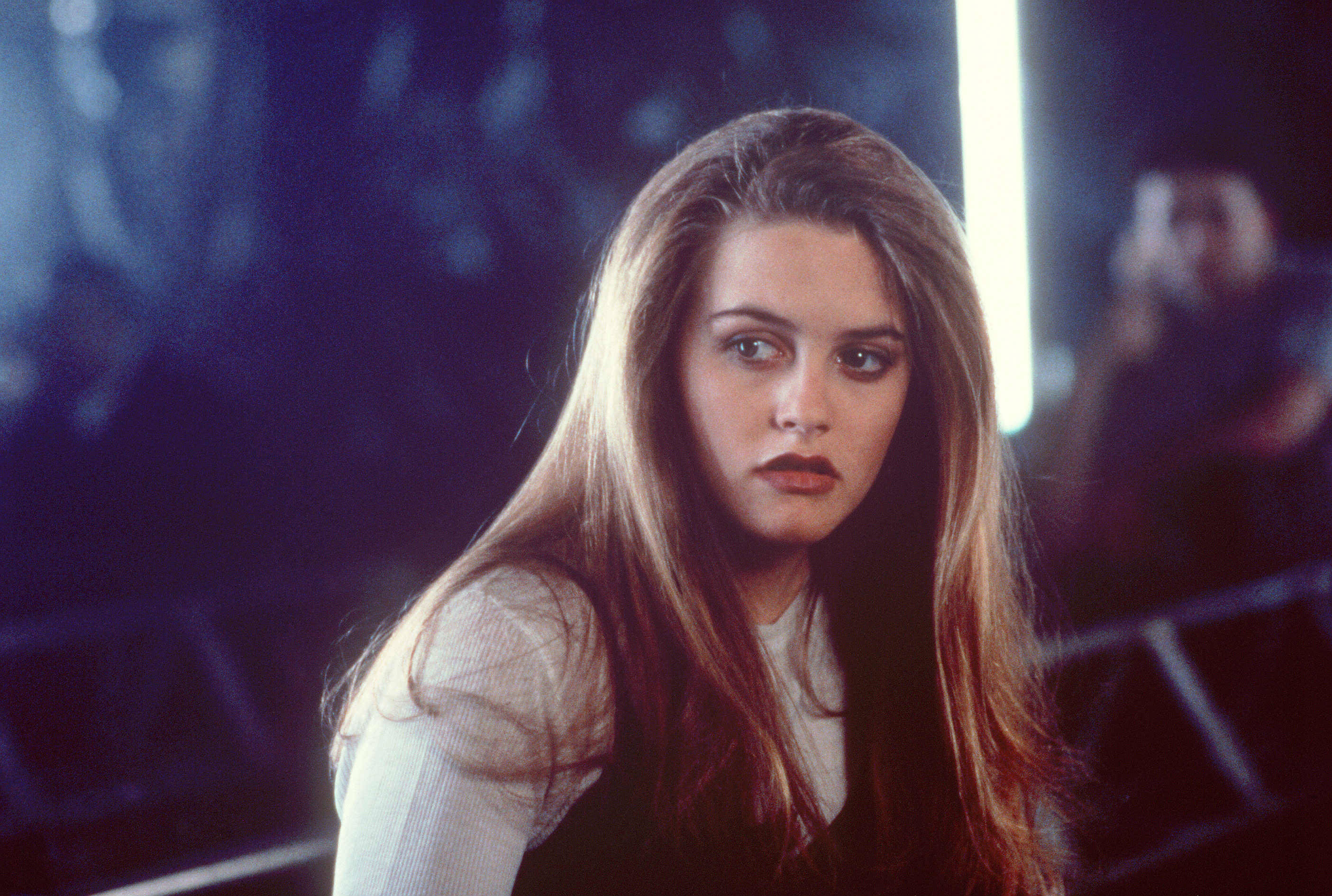 Alicia Silverstone acted her age in 'Hideaway. (Photos from MovieStillsDB.com)

uch has been said of the 1990s in regards to the genre, with many moping about the dearth of good American horror the decade produced. Others - mostly, those who came of age during the period - speak of how Wes Craven’s Scream and its stabby, self-referential ilk “saved” contemporary horror. I suppose both arguments are valid, and sure, the ’90s also saw a wave of notable faves such as Candyman and Nightbreed slinking out from the multiplex, eventually becoming classics. Still, a majority of horror films from this era were very safe, slick and clean affairs. Few had the arch angles and WTF moments that make the genre so interesting. Sure, Scream may have hit hard with critics and the Friday-night date crowd, but I felt then and even more so now that its smugness, its faux-witty dialogue, and its small-screen sensibilities were miles removed from everything I love, respect, and, yes, fear about stranger cinema. When I close my eyes and think of the ’90s silver screen, all I see is an endless succession of samey-same posters with pretty alabaster young people standing in cascading lines, glowering at the lens. And - in my opinion - most of the movies they helped shuck were equally as uninspiring. It was as if the FRIENDS-ification of domestic pop culture dumped a kind of pretty glue over every moving entertainment in its path. Blech...

However, there were a few bright, spastic cinematic spots that stuck out from the pedestrian pack. Stuff like Ravenous and From Dusk Till Dawn, though I can’t really cite that last picture as a true horror movie, and I’ve always felt its second-half horror component paled in comparison to its straight-up crime drama set-up. No; to me, the greatest of arcane offerings coming from the last gasp of the past millennium was a picture everyone seemed to hate. They hated it then. They probably still hate it now, though perhaps that contemporary hate is closer to ignorance as I’m willing to bet folks have either forgotten about it or didn’t even know the movie existed in the first place. The visionary, violent, and merciless slab of mad-science slasher mayhem I speak of is Brett Leonard’s muscular and ultra-stylish 1995 mind-bending psychic stab-a-thon Hideaway, and it’s about goddamned time people started paying attention to it.

Based on the novel by Dean R. Koontz, Hideaway stars the inimitable Jeff Goldblum as Hatch Harrison, a family man who gets into a harrowing car accident with his wife Lindsey (Christine Lahti) and daughter Regina (Alicia Silverstone). The ladies survive, barely, but Hatch does not. Legally deceased, he is miraculously revived by a dedicated doctor (the great Alfred Molina) who has subjected the briefly dead dad to an experimental technique that gets his still heart beating anew. Hatch is back, much to the joy of his momentarily shattered brood, and soon, the clan is getting back to the business of living their lives. However, almost immediately, Hatch begins feeling off. When mild blackouts turn into seizures, then full-blown visions of razors dragged across exposed female throats, the unnerved patriarch knows something is amiss. He realizes the procedure that brought him back to life has mysteriously tied his mind to that of a black leather-clad teenage Satanic serial killer (the undervalued Jeremy Sisto). Vassago is a night-crawling maniac whose bloody trail of sliced-open women has the city in a state of terror and Hatch teetering on the edge of sanity. Worse, the killer can now see through Hatch’s eyes and quickly, his attentions turn to Hatch’s pretty teenage daughter. But outside of the sinister supernatural link the pair share, could a more malevolent medical reason also have something to do with the connection? Hatch literally goes to Hell and back to solve the mystery and stop the monstrous Vassago before Regina falls under the knife for keeps.

Hideaway belly-flopped and critics killed it, all except the late, great Roger Ebert. Ebert defended the picture against the sneers of his At the Movies co-host Gene Siskel, praised the picture’s single-minded desire to create a black-as-night, unsparing horror movie, and thrilled to the picture’s imaginative visuals. Ebert famously hated slasher movies, but he loved high-concept, fantasy-based horror, and Leonard’s gruesome and surreal freak-out of a flick is just that. The film may rest its laurels on scenes of well-dressed male murderers opening the flesh of too-trusting women, but its soul belongs to mad science, a classic “Hands of Orlac/Mad Love” narrative thrust that also informs one of the other brilliant and unsung ’90s chillers, Eric Red’s kinky 1992 romp Body Parts. Here, however, the medical meddling is nestled into a more lurid and intimate environment, one that juxtaposes extreme scenes of terror and bloodshed with a palpable cat-and-mouse relationship between the leading men. And the picture never forgets to lay on the line the love that Hatch has for the family that he will stop at nothing to protect.

Hideaway may have its roots in Koontz, but the movie belongs to its director. The author famously despised this adaptation. It was understandable: Leonard simply uses the source as a blueprint for a sensual, spastic audio-visual, free-fall of a film. The movie aims to amp up the novel’s more visceral elements and exploit them to shock its audience, while never forgetting that the human element - along with a seriously grim sense of humor - is steering the ship. Leonard is an undervalued director (seriously, whatever happened to him?), and he made Hideaway at his Hollywood peak. He was able to blend the evil-doctor sub-genre of his maiden feature, the video-store rental fave The Dead Pit (remember those awesome blinking ghoul eyes on the box?) with the kinetic sci-fi visuals of his Stephen-King-in-name-only dark drama The Lawnmower Man and the virtual reality serial-killer shenanigans of his thriller Virtuosity (1995). Like the first film, Hideaway is ripe with surrealism. As with the latter pictures, early CGI head-trip sequences weave in and out of the movie, climaxing in the mother of all over-the-top ’90s computer-soaked effect endings. It was a borderline animated finale that most dismissed as cheap, but is so baroque and operatic that it can be rather beautiful. The trippy digital-Kubrick trickery combined with the liquid style of the kill scenes make Hideway often feel like some jacked-up giallo, the best film Dario Argento never made. That, and Sisto and Goldblum (who seemed to be borrowing his wardrobe from his other signature ’90s character, Ian Malcolm in Jurassic Park) in copious amounts of black leather.

Are there problems with Hideaway? Sure. Does it often get lost in its own sense of style? Sometimes. Does Goldblum’s ultra-intense turn occasionally veer into camp? Certainly. But it’s those very flaws that make the film so fascinating and memorable. It’s a lush and nasty piece of work, propelled by a punishing industrial rock soundtrack that includes tracks by the likes of Front Line Assembly and Godflesh (who are actually in the movie!). And unlike other matinee-friendly movies of the period, the teens in Hideaway - specifically Clueless star Silverstone, who is great here - actually ACT like teens. Strong-willed, serious, scared and unwilling to counter the horror around them with head-smacking witticisms or groan-worthy sarcasm. The characters feel real, even when the situation around them is absolute phantasmagorical lunacy.

Chris Alexander is the former editor-in-chief of FANGORIA (2010-2015) as well as the editor and co-founder of cult film magazine Delirium. He is the writer, director and composer of the films Blood for Irina, Queen of Blood, Blood Dynasty, Female Werewolf, and Necropolis: Legion (produced for Full Moon Features). As a musician, he has released the albums Music for Murder, (Giallo Disco Records), Blue Eyes of the Broken Doll (Future City Records) and The Drink Your Blood. More on Alexander’s work can be found at www.ChrisAlexanderOnline.com. FB: www.facebook.com/chris.alexander.54966834 IG: @chris_alexander_films