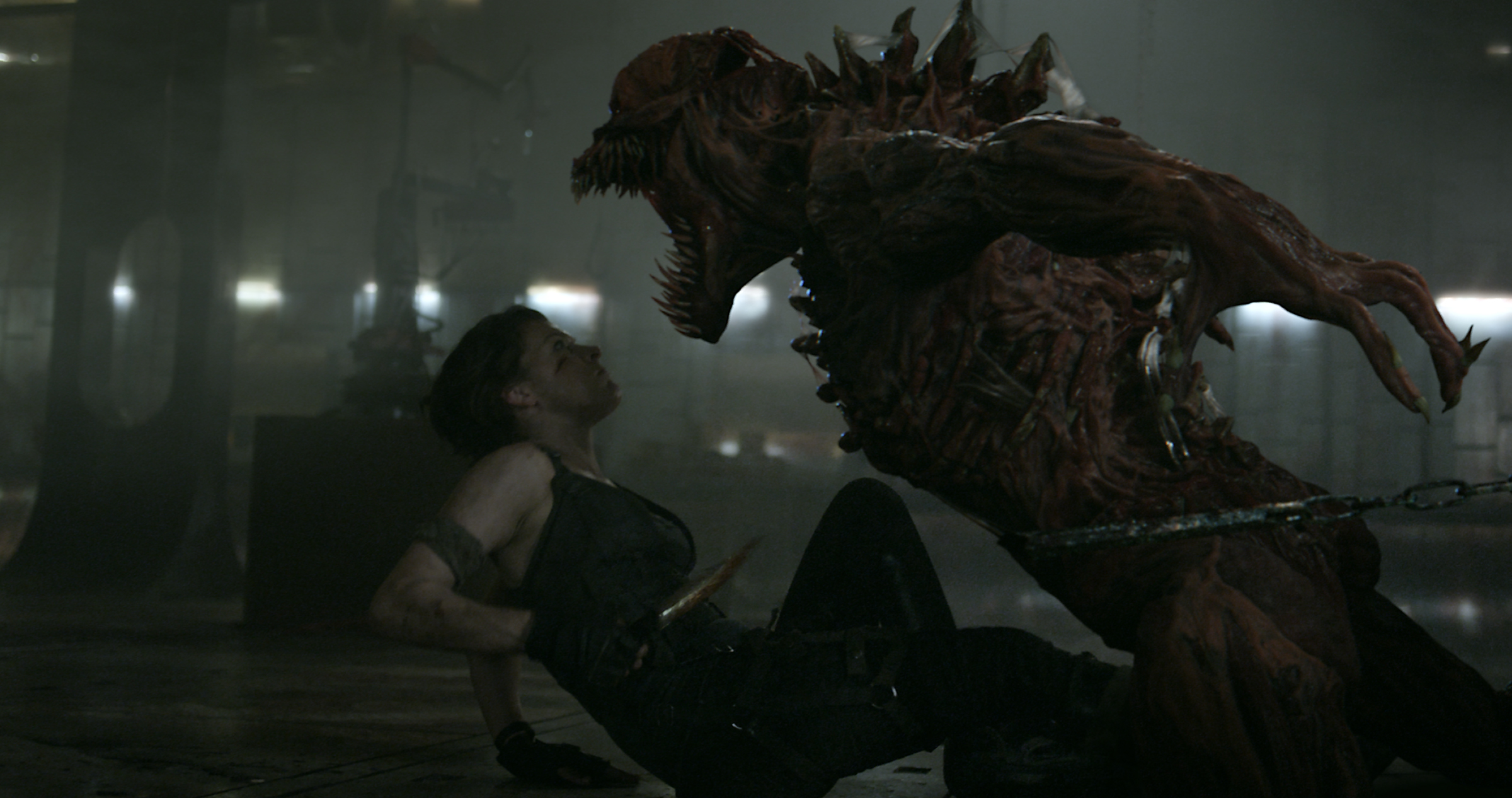 Is it all just a game? Milla Jovovich doesn't think so. Hello, "Resident Evil" series. Nice to meet you.

Greetings, ghoulish gamers, and welcome to Goreplay, FANGORIA’s new gaming column where we will round up the latest news and releases from PC to console, from indie to blockbuster, that will tickle the interest of horror fans.

Moons of Madness (out now on PC, console release in 2020)

It’s only a short sideways jump from the existential anxiety of The Martian to the cosmic dread of Lovecraft, and it’s a leap that this new first-person experience from Funcom makes in style. The backstory tells of a mysterious signal from Mars that the Orochi corporation begins to investigate in secret, establishing a small scientific colony called Trailblazer Alpha on the red planet but only trusting its top scientists with the knowledge of what they’re really looking for.

The game picks up with you as Shane Newehart, a lowly engineer who has no idea about any of this intrigue. Things go wrong quickly, and Newehart finds himself alone in the rapidly disintegrating base as systems fail and sinister meaty creatures emerge from the experiments.

It’s fair to say there’s little here that feels original – racing around a science lab, pursued by shuffling fleshy enemies has been part of gaming’s DNA since Doom first blazed onto our screens. Moons of Madness is more about narrative than action, with a laundry list of gadgets to be fixed through mid-level puzzles, putting it in the same bloody ballpark as Outlast and Soma.

That’s not to say it doesn’t deliver the genre clichés with confidence. Its world is robustly designed, full of tactile locations and packed with clever details that reward attentive play. The audio, too, is cleverly designed to keep you on edge while trying to repair the latest failing system. And when it comes to the gruesome stuff, and the jump scares, it hits the bull’s-eye pretty much every time with unpleasant creature designs and a constant background sense of things being just not right. If you don’t mind your frights being a little familiar, Moons of Madness is a solidly spooky scramble across well-trodden terrain.

Afterparty (out now for PC, PS4, Xbox One)

Horror-adjacent rather than out-and-out horror, this witty adventure from the creators of supernatural mystery Oxenfree nevertheless takes you into a hellish underworld, even if the most dangerous demons you face will be your own. You take dual control of Milo and Lola, two hard-boozing 20-something buddies who wake after a particularly heavy bender to find they’re in Hell. This is a sardonic take on Satan’s realm, however, where the damned and their tormentors clock off at the end of each day’s torture and hang out in bars. And it’s here that Milo and Lola discover a loophole in infernal law: if they can outdrink the Devil, they can go free.

Much like Oxenfree, the gameplay is closest to the likes of Monkey Island and those other point-and-click adventures. The emphasis is more on progressing the story through choices and dialogue than arcane inventory puzzles, and while the story is wittily written, the humor is eventually laced with soul-searching and melancholy as these prickly protagonists pick apart their own personality flaws along the way. Don’t come to Afterparty expecting scares or gore, but if you like your modern ennui delivered with a dark supernatural twist, it’s highly recommended.

Wait, what? Is FANGORIA seriously covering a kid’s game? Well, yeah, we are. Everybody needs a gateway to the genre, and with its creepy but comedic tone, this Mario spin-off is as effective at enticing junior fright fans as Haunted Mansion or Goosebumps.

As with the previous two games, the action focuses on Mario’s sidekick brother Luigi, who must explore the different floors of a haunted hotel, and rescue his friends from the spooky King Boo, using his flashlight and Poltergust vacuum to stun and suck up roaming spirits. He’s assisted this time by a Tim Burton-esque ghost dog called Polterpup and a clone of himself made from green slime.

Like pretty much every Nintendo game, delightful ideas abound, and the gameplay keeps throwing out new ideas and concepts to keep you interested as Luigi clears each floor. There are even some fun multiplayer modes, but the single-player story is a perfect Halloween treat for kids who love lighter creepy stuff.

Two of Japan’s most esoteric game developers are teaming up. Goichi "Suda51" Suda, best known for No More Heroes, Lollipop Chainsaw and Shadows of the Damned, and Hidetaka "Swery" Suehiro, best known for the gonzo Lynchian adventure Deadly Premonition, are collaborating on Hotel Barcelona, a low-budget horror game that will likely be published by Devolver Digital. The pair made the announcement during a joint livestream, and the only details so far are that the game will be inspired by 90s survival horror classic Siren. To ram that connection home, they both texted Keiichiro Toyama, creator of Siren and Silent Hill, during the stream asking him to pitch in – and apparently, he replied yes. Given their previous work, whatever shape this project ends up taking, it will be worth experiencing.

Fans of bloated survival horror sequels will be pleased to know that Resident Evil 5 and Resident Evil 6 are out on Nintendo Switch. These were the entries that skewed the series hard in the direction of co-op action rather than solitary horror, but there is also a triple-pack which adds the excellent Resident Evil 4 if you want a complete set.

Another older game getting a new lease of life – or at least undeath – is 1998 PlayStation game MediEvil, now out in a PS4 remake. With a heavy influence from A Nightmare Before Christmas, you guide inept skeletal warrior Sir Daniel Fortesque as he slashes his way through zombie hordes to save the town of Gallowmere from an evil sorcerer. The graphics makeover for this updated version is nicely done, retaining the goofy ghost-train vibe of the original while smoothing out the rough edges, but a clumsy camera and gameplay that never quite evolves beyond jogging down identical pathways and mashing buttons to demolish your enemies, means that its old-fashioned charm expires long before its bony hero. Passable fun for the nostalgic gamer, but probably not as good as you remember.

Finally, a 2020 game you should have on your radar: Carrion. This “reverse horror” title puts you in the role of the monster and sets you loose to devour and dismember the hapless troops and scientists who are trying to stop you escaping into the world. It’s developed by Phobia Game Studios; its previous game, the gore-splattered Butcher, should give you an idea of what to expect. As an undulating sack of meat, blood and tentacles, you get to slurp and scuttle around each level, hiding in vents and striking from the shadows, or just risking it all in a grisly hell-for-leather showdown. It’s basically the closest you’ll get to an official game of The Thing, where you get to play as The Thing. The full game is due for PC and console next year.