Mark Shostrom's War Stories: The Film I Wasn't Ready For 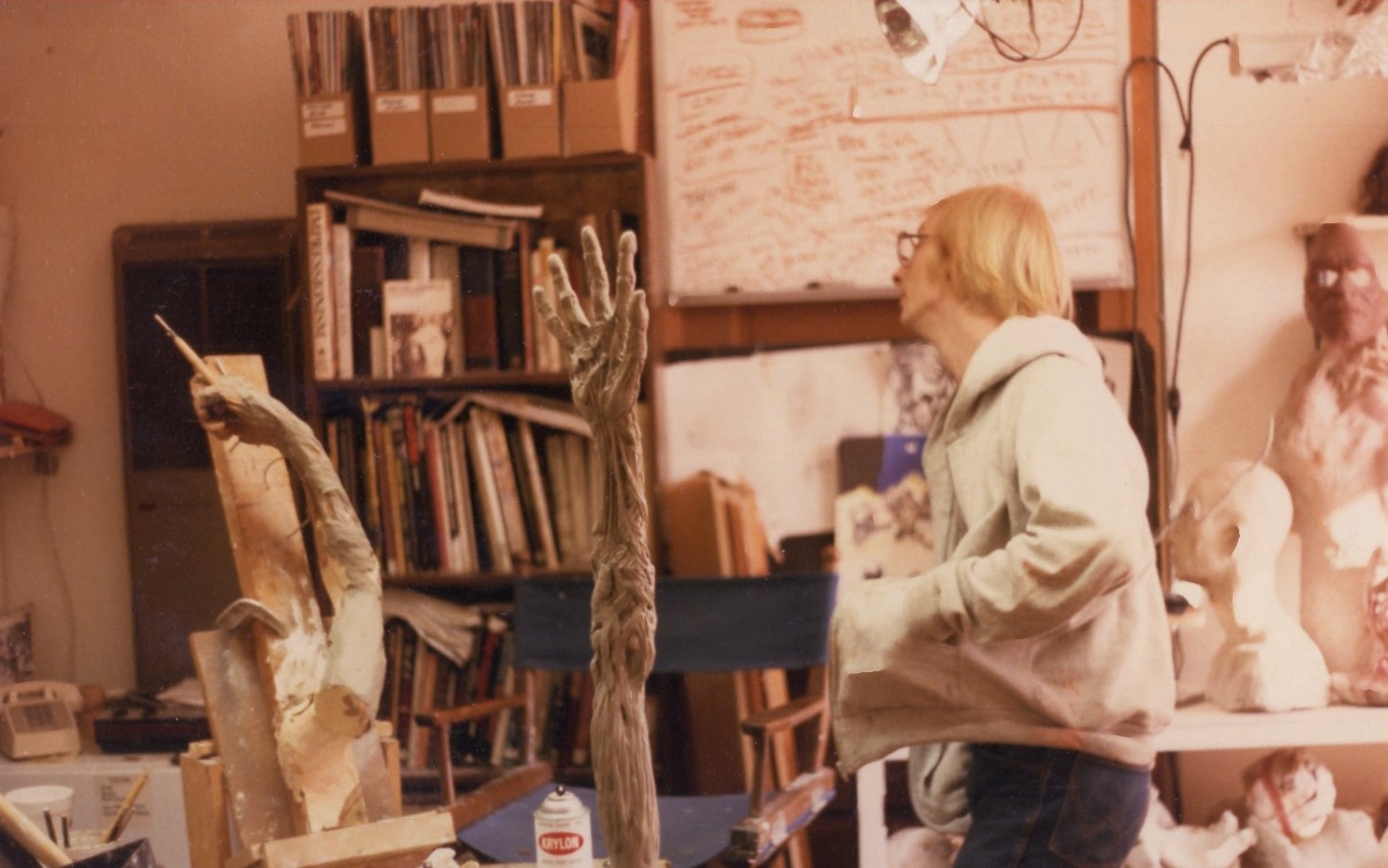 Mark Shostrom in his tiny studio in the winter of 1984.

Mark Shostrom's War Stories: The Film I Wasn't Ready For

In early 1985, an unknown writer named Jim Thomas called me about a job. He’d gotten my number from Ernie Farino, a friend who was creating optical and Rotoscope effects for a soon-to-be released film called Terminator. Jim had contacted Ernie needing creature effects, and Ernie had recommended me.

“What’s your movie called,” I asked Jim over the phone.

“Hunter. It’s about a group of commandos in the Central American jungle who encounter an alien that hunts people for sport,” Jim replied. The scenario sounded familiar. “It’s a retelling of The Most Dangerous Game.” I was familiar with that 1932 film; its production team would go on the following year to make King Kong (1933).

A few days later, Jim came to my humble studio - all 240 square feet of it - and I showed him my portfolio. I had been in the film business for four years and had just finished my first big job - The Supernaturals - which wasn’t really that big.  Jim looked at my work and at the sculptures around my studio. He was impressed.

Then he brought out a 6-inch tall model somebody had done of ‘’The Hunter."  He looked embarrassed and sheepishly said, “I know it’s not very good, and you can do a million times better … it’s just a possibility.”

It was the dumbest-looking thing I’d ever seen, like a green Sesame Street alien with a duck face and yellow spots. I didn’t ask who made it and didn’t want to know. But I was intrigued with Jim’s film and grateful for his enthusiasm to have me on board.

I read the script that night, written by Jim and his brother John. It was well-done, tight, very military: lots of testosterone, gunfire, and machismo. Jim didn’t have an agent and I thought it was a long shot for his film to get made. I was relatively new to the business but experienced enough to know that a spec script with an unknown writer, and without financing, had a tough road. Such projects did happen, but I felt Jim was in for an uphill climb which could take many years.

Jim was keen on me designing the Hunter, but he had no funds. I did some gratis sketches for him. He liked them and was grateful for me doing my part to keep the project alive. One night, I drove to his place in Marina del Rey to pick up a revised script. It was a tiny place on the water.

“I’m hoping to get an in at Fox,” Jim said.  “Hell, I may even hop the fence to get the script to someone there.”

If this film never got made, I knew it wouldn’t be for Jim’s lack of trying. He really believed in himself, and that was critical.

My first career-making project began in early summer: A Nightmare on Elm Street 2. A few times during my three-month commitment, Jim would call to say he had another rewrite. “Send it along,” I’d reply. I’d begun to accumulate many versions of his script and cleared space on a separate shelf for them in my new studio, ten times larger than the one Jim had come to. My career was in full swing and anything was possible.

As Elm Street wound down in July, I sculpted one of The Hunter’s skinned victims on a clay bust of Mark Patton. Jim thought it was delightfully gristly.

A month later, unbeknownst to either of us, and on the other side of Los Angeles, a Fox executive was cleaning out his office to vacate for an incoming executive. The executive found the unsolicited Hunter script and tossed it down. When the new guy, Michael Levy, moved in the next day, all he saw was an empty desk with the Hunter script on it. I never learned how it ended up there, but I could almost see Jim knocking out Fox guards and hopping the gate in full commando gear with the script under his arm.

Surprisingly, Levy read it. He then recommended it to his friend, producer Joel Silver (Commando, Lethal Weapon).

Jim called me, excited: “Joel Silver’s producing and we think we can get Arnold for the lead.”

Holy shit, I thought, this thing looks like it’s actually going to happen. It was good news, but it made me a little nervous. Was I up for it at that point in my career and level of artistry? (My answer today: Not quite. Would I have accepted the job anyway? Absolutely.)

Throughout the months of development, Jim loyally kept pushing me and surprisingly, Fox was behind him to have me design and create the alien for Hunter. I was, in one Fox executive’s words, “a promising newcomer.”

1986 came. Arnold accepted the film. Suddenly it was going to be a big summer release for 1987. Other actors came on board: Carl Weathers, Bill Duke, Jesse Ventura. The budget was upped to $15 million. The title was changed. Hearing the news, I started to sweat. Was I really ready for this? I didn’t have to worry long because another call came from Jim, this one very apologetic. Fox decided to bank their investment on someone with more effects experience.

“Don’t apologize,” I replied. “Rick will do an amazing job.”

Rick ended up turning it down to focus on Harry and the Hendersons. The job went to the Ghostbusters team at Boss Film Corporation. After that legendary debacle, production shut down while Stan Winston came in to redesign and create the Hunter alien, with key creative work by newcomers Steve Wang and Matt Rose.

I got a final call from Jim in the spring of 1987. He invited me to a special Fox screening of his film.

I was busy as hell but happy to go. I was delighted for Jim. He had achieved the near impossible. The lights went down and I watched his film with its new title: Predator.