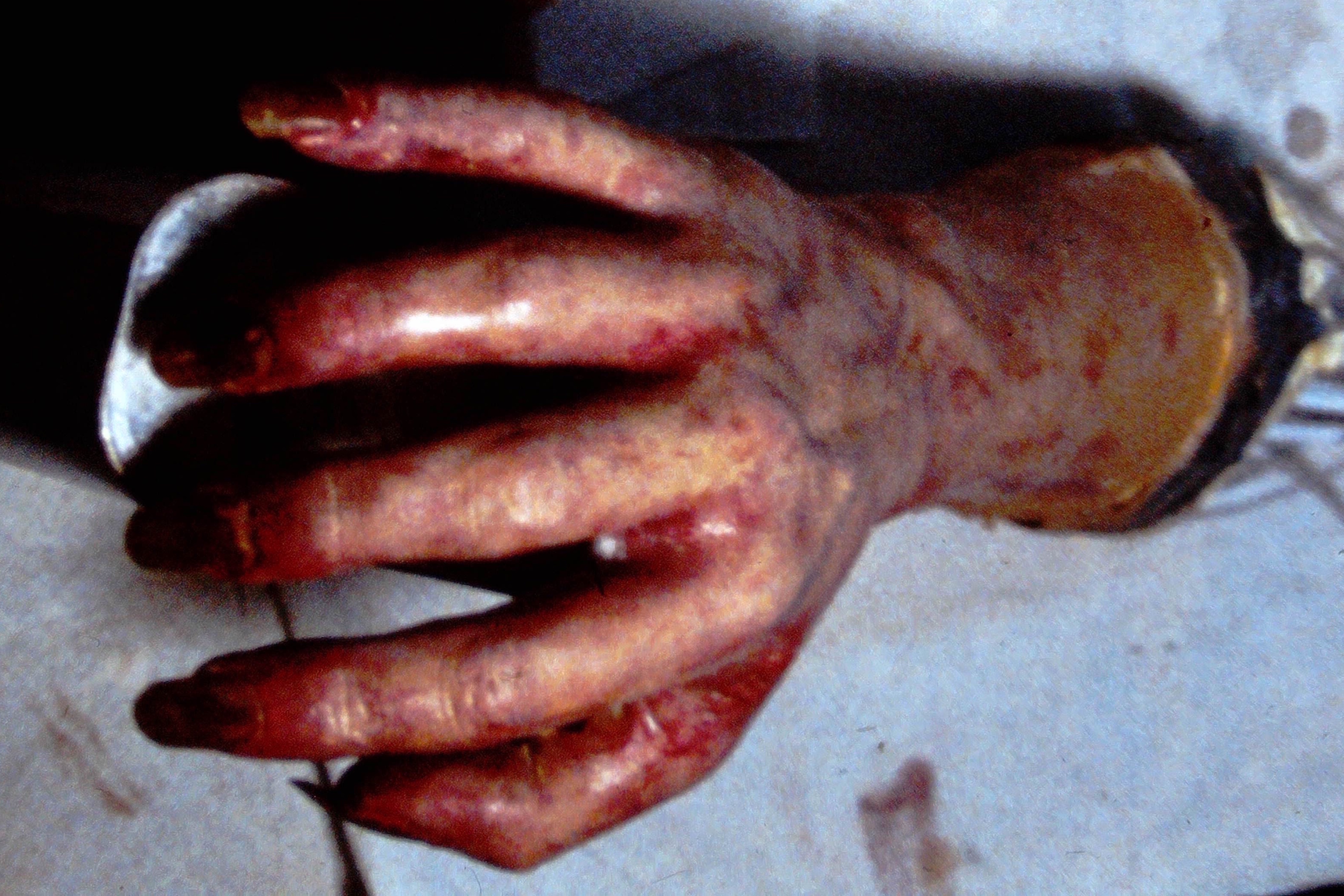 The hand with a plan on the set of "Evil Dead 2." (Photo courtesy of Mark Shostrom)

irst impressions count. When you have to perform for the first time on a new film, it can be stressful. Although everyone working on a movie knows filmmaking is a juggling act of problem-solving, and that glitches happen, the producer and director who brought you aboard nonetheless expect you to accomplish miracles out of the gate.

Going into The Mutilator (1983) with my partner Anthony, I didn’t know what to expect.  Director/producer Buddy Cooper had no idea what to expect either. All Buddy knew was that he had spent a lot of money on a supply list that I had given him and that it had cost even more to ship everything from New York - hundreds of pounds of plaster by train. Arriving in North Carolina, our first order of business was to life-cast the actors. We had the heads and bodies of basically the entire cast to do. Buddy had scheduled Francis Raines to be our first victim. She was the niece of Claude (The Invisible Man) Rains, which I thought was pretty cool.

In the days before silicone, all life-casting was done using alginate, a flexible powder mixed with water which turns into a creamy paste. Up until 1982 - when we did The Mutilator - there was only dental alginate, used for molding teeth. It had a quick setting time: two minutes. Luckily, in 1982, makeup legend Dick Smith had discovered Teledyne Prosthetic Grade Cream (PGC). It was a new alginate specially made for prosthetic body casting. It had a five- to six-minute setting time, plus you could get a retarder which would give you 10-15 minutes.

Anthony and I had to cast Francis’s bare chest for a piercing effect. We decided to try out Teledyne’s new PGC retarder to get a 15-minute set. I was positive this stuff was going to be magic. We measured precise amounts of water into beakers, and exact batches of PGC on a scale - right down to the gram. In my calculations for the retarder, however, I must have put a decimal in the wrong place. Looking back, I think I added 10 times the amount needed.

Buddy watched as we mixed the PGC and applied it to Francis. He had a friend take photos of the process. (Hey, they were watching two Hollywood pros at work - how exciting is that?)  Buddy asked how long it would take to set and I told him 15 minutes. Fifteen minutes passed. The material showed no sign of setting. Then 20 minutes, 30, 40. Needless to say, this did not look good - nor did Anthony and I.  We kept scooping up the goopy material. Francis was patient, Buddy was doubtful, and I was embarrassed beyond belief.

Thankfully, the stuff set … after 90 minutes. But the material had degraded into an unusable mess. I explained to Buddy that we would have to re-do. We set up the next day and I made damn sure to re-check my retarder calculations and had Anthony check them as well.  The second life cast on Francis went without a hitch.

With Francis’ body cast, the audience was small. Our first failed effort was witnessed only by Buddy and Francis, and we soon had a chance to redeem ourselves and prove we knew what we were doing. Doing an effect on set on the other hand - where production is costing tens of thousands of dollars a day - is a hell of a lot more pressure. In FANGORIA #16 (1981), Dick Smith likened filming effects to a military maneuver. “You’re going into battle and it’s all going to be over in a few minutes and you’re either going to live or die,” he said. No truer words were ever stated.

Arriving back in North Carolina three years later on Evil Dead II, the pressure was indeed higher. The entire film depended on the effects I had designed. I showed up on my 30th birthday and went directly to set: Ash’s cabin built in the gym of an abandoned high school. The first thing I saw was Bruce Campbell flipping himself 360 degrees and smashing plates on his head. Holy shit, this is going to be a wild ride, I thought.

The first special makeup effect was scheduled for that night: Ash stabbing his evil hand to the floor with a butcher knife. I went to the lab and did final preparations on the gelatin bleeding hand I had made for the shot. In my six short years in the business, I had done a lot of cutting/bleeding effects and felt I had worked out any bugs. I tested the hand with water in place of blood. I had seen people fuck up an effect on set and knew that once you lose the confidence of the director and crew in your ability, you can’t get it back. That was never going to be me.

On set, I helped Bruce put his arm through a hole in the floor. I rehearsed cues with he and director Sam Raimi. I touched up the hand and primed the tubes. The entire crew gathered to watch the first spilling of blood on Evil Dead II. The pressure to perform was off the charts. I thought about Francis and the botched body cast … but anyone looking saw a guy as cool as can be.

Bruce stabbed the hand, it wiggled and black blood practically ejaculated.  Sam called cut and there was silence. Then Bruce smiled at the impaled hand, looked at Sam and said:

“By God, that sucker worked!”‍