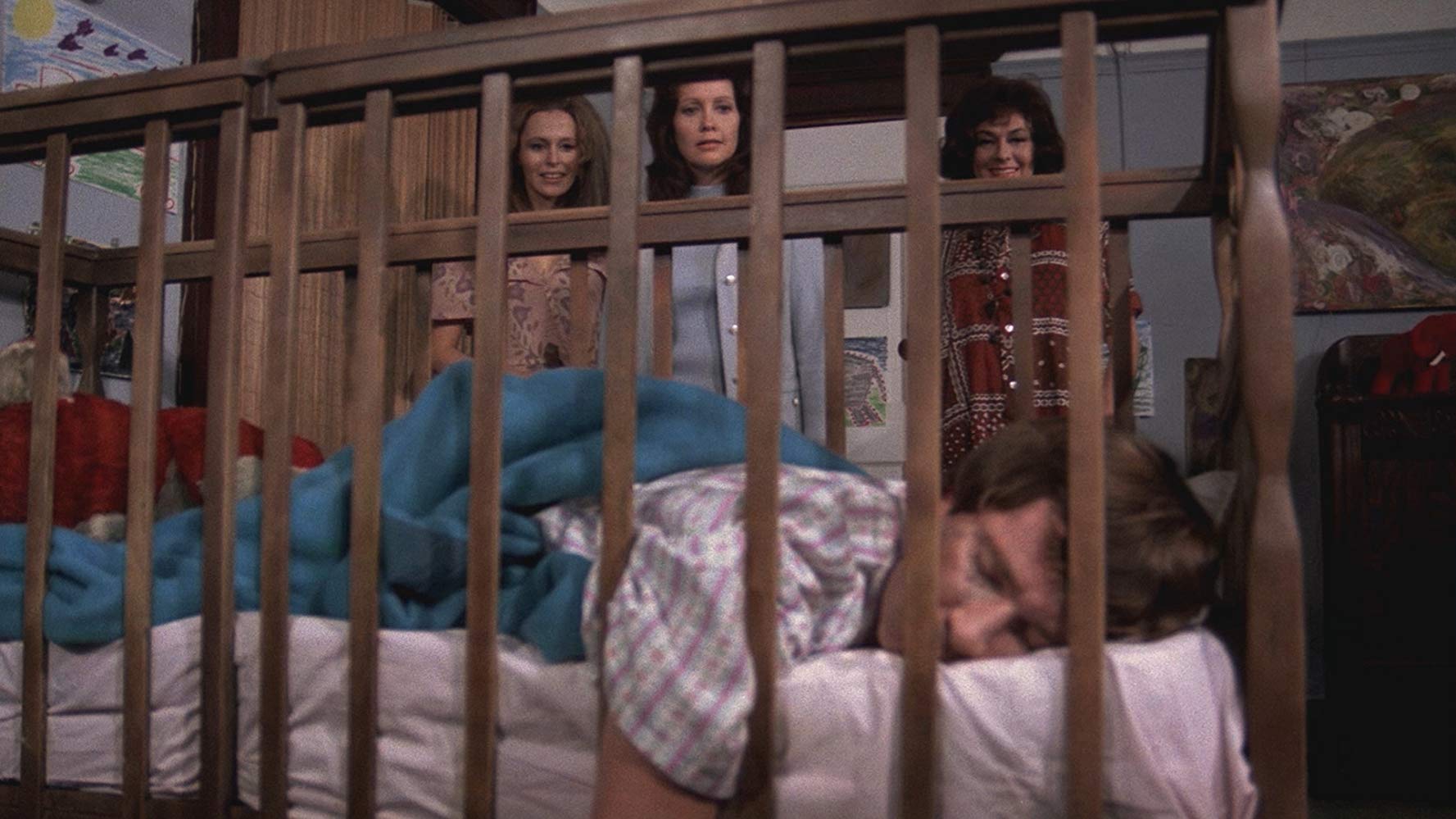 David Mooney spent a lot of time in the crib for "Baby." (Photos from imdb.com)

‍Under the Skin takes a deep dive into some notable horror films you might not know as well as you should. This entry looks at The Baby, a long-forgotten 1973 horror film that’s resurfaced as a cult classic in recent years.

n 2016, trouble erupted in the Chicago suburb of Mount Prospect. Some residents were not happy about the opening of a new store called Tykables, a place stocked with giant cribs, over-sized diapers, jumbo stuffed animals and other items that might make an unsuspecting visitor feel as if they had somehow been shrunken down and entered a world of giants. Designed to cater to adults who, for a variety of reasons, wanted to be treated like babies, Tykables met hostility when it first opened in a previously vacant storefront, but the town’s village manager shut down the protests by noting that the appointment-only facility wasn’t participating in any illegal activities (and was bringing in tax revenue in the process). Ultimately, the village dealt with the controversy with the sort of as-long-as-nobody’s-getting-hurt tolerance that might be expected of Dan Savage readers and listeners.

Still, for those who don’t share that preference, it can be a little off-putting to see adults do their best imitation of an infant. What’s cute coming from a helpless baby looks off coming from someone old enough to drink and drive a car. Made years before what’s now most commonly known as adult baby syndrome was widely known, the 1973 film The Baby taps into that uncanny divide to create one of the strangest horror films of its era via the story of a man known only as Baby.

Anjanette Comer stars as Ann Gentry, the latest in a string of social workers to take over the case of the Wadsworth family. Headed by the woman known only as Mrs. Wadsworth (Ruth Roman), it includes her two daughters Germaine (Marianna Hill) and Alba (Susanne Zenor), who live in a shadowy Victorian in an otherwise sunny Los Angeles neighborhood. But the most notable member of the house is Baby (David Mooney, credited here as David Manzy). Baby has the body of an adult, but he doesn’t walk or talk. He flops around in an oversized crib, drinks from a bottle and makes gurgling noises. And he cries a lot, melting down in paroxysms of sobs as he flails his limbs about, just like, well, a baby.

Much of what makes The Baby work can be traced to Mooney’s performance. He throws himself into the part with a scary abandon. (Beck Bennett’s “Office Boss” SNL character looks restrained by comparison.) Baby stares at objects with the hypnotic fascination of a child still figuring out how the world works, and his tantrums suggest the pain of a despondent creature convinced he’ll never be happy again. That the film overdubs his vocalizations with real baby noises just makes the performance creepier. Growing up means unlearning this sort of behavior, but, for one reason or another, Baby has gotten stuck.

Another sort of disconnect helps make The Baby even more unsettling. Scripted by Abe Polsky, probably otherwise best known for the draft-dodging comedy The Gay Deceivers, by bare description, the film sounds like the sort of grindhouse cheapie made on a shoestring budget or an over-the-top camp-fest that plays its set-up for laughs. (John Waters could easily have written an adult baby into one of his films, and sort of did via Edith Massey’s Pink Flamingos character.) The Baby has other plans. Its cast of then-familiar faces — Roman had starred in Alfred Hitchcock’s Strangers on a Train and worked non-stop ever since and Comer guested on virtually every popular ’60s and ’70s show — plays it straight as does the somber score by Gerald Fried, who worked on Stanley Kubrick’s early films before providing music for Gilligan’s Island, The Man from U.N.C.L.E. and, most famously, Star Trek. But it’s director Ted Post’s decision to shoot it almost entirely like a flat TV production filled with neutral lighting and matter-of-fact compositions that gives it an especially off-kilter quality. Nothing this weird should look so normal.

In many ways, this was just Post’s style. He’d worked in television since its early days and his films favor the same meat-and-potatoes efficiency of his TV work. Beneath the Planet of the Apes, for instance, has many laudable qualities, but visual lushness isn’t one of them. Magnum Force, the Post-directed sequel to Dirty Harry released the same year as The Baby, doesn’t come close to matching the style of the original. (That can’t all be attributed to Post, however. He’d collaborated with Clint Eastwood since Eastwood’s Rawhide days, but the two clashed on the set.)

The approach is, in theory, all wrong for the film, but the flatness makes the film seem that much stranger. The Baby doesn’t strain for traditional horror-movie atmosphere no matter how shocking its material gets. Be it a babysitter submitting to (and enjoying) Baby’s demands to breastfeed, one of Baby’s sisters joining him in the crib, or a final twist that’s more shocking than anything that precedes it. The Baby feels at times as it were beamed in from another universe where scenes of man-babies being tortured with cattle prods for daring to try to walk and talk was just everyday entertainment.

Somehow the film earned a PG rating in 1973, a time of admittedly more lax standards for the Motion Picture Association of America (MPAA). That rating didn’t stand in the way of a lurid ad campaign, however, one that featured Zenor striking a seductive pose while clutching a teddy bear next to a crib with a hand grasping a bloody axe protruding from it. “What goes on in this nursery isn’t for kids!” the ad promises, which is true enough, even if the subsequent promise — “In the terrifying tradition of Alfred Hitchcock’s Psycho” — is something of a stretch.

The Baby rolled through major cities in 1973 and 1974 without attracting much notice from critics. It accumulated a cult following slowly, through TV airings later in the decade and especially in the DVD era, when a new generation rediscovered it. So, too, did an unexpected audience. After leaving Hollywood in the early ’90s, Mooney returned to his native Texas and took teaching jobs where his past would occasionally catch up with him. Mooney seems to have had a good attitude about being found out, even speaking to a student newspaper about his film work in 2015. “The acting part of that was so difficult,” he told Audrey Payne, a student reporter at Claudia Taylor “Ladybird” Johnson High School. “I had to totally de-man-ize myself and become a baby.” Mooney died this past April at the age of 77, but in The Baby, he remains forever, disturbingly young.

The Baby is available on Blu-ray via Arrow Films and can be streamed for free on Tubi.tv.

Keith Phipps writes about movies and other aspects of pop culture. You can find his work in such publications as The Ringer, Mel Magazine, Vulture, TV Guide, Decider, Polygon and The Verge. Keith also co-hosts the podcast 'The Next Picture Show' and lives in Chicago with his wife and child. His all-time favorite horror film is Dawn Of The Dead, but he’s still baffled by the moment when the biker decides to use the blood pressure machine in the middle of the zombie attack. Follow him on Twitter at @kphipps3000.