Under The Skin: 'The Blob' 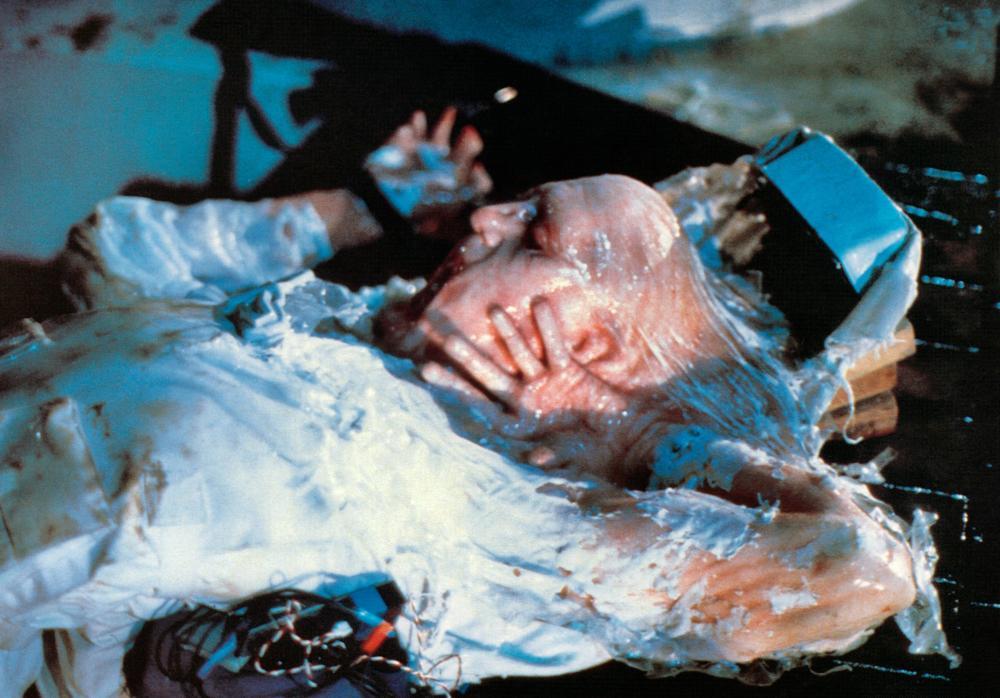 Under The Skin: 'The Blob'

Under the Skin takes a deep dive into notable horror films you might not know as well as you should. This week: In 1988, A Nightmare on Elm Street 3 director Chuck Russell attempted to remake a ’50s classic for ’80s moviegoers. It didn’t quite go according to plan, but it deserves a second look.

or a long stretch of the ’70s and ’80s, it was easy to feel as if the ’50s never ended. Musically, the decade held a grip on the public imagination via nostalgia acts like Sha Na Na (whose big break came at Woodstock) and The Stray Cats (who used a quintessential ’80s form, the music video, to peddle a safe, cartoonish take on rockabilly). But the influence went deeper. The ’80s saw a political movement thrive trying to sell an idealized vision of a bygone America before the changes brought by the 1960s, prompting films like Back to the Future to reckon with what the changing times really meant. Even the decade’s monsters took encores. 1978 saw Philip Kaufman’s new take on Invasion of the Body Snatchers followed by John Carpenter’s The Thing in 1982 and David Cronenberg’s The Fly in 1986, each of which found a way to update stories for a new era.

Despite picking up a cult following after flopping in theaters, the 1988 remake of The Blob rarely gets spoken of in the same breath. Directed by Chuck Russell in the years between A Nightmare on Elm Street 3: Dream Warriors and The Mask, it can’t boast Kaufman, Carpenter, and Cronenberg’s compelling mix of thrills,horrifying images, and rich, thematic concerns. You won’t find, for instance,the equivalent of Kaufman’s brilliant evocation of the late-’70s free-floating sense of purposelessness or Cronenberg’s exploration of mortality and loss. But The Blob has its own sort of appeal. The film mostly seems content to set a pulsing monster loose in a small California ski town and watch as chaos unfolds.

But here’s the thing: The Blob does that extremely well and in ways that keep viewers continually on their feet. It opens by establishing the key players in its small-town-residents-against-murderous-pink-goo drama then begins taking them off the board — only not in the order anyone might have expected. In an interview included on the new Scream Factory Blu-ray, Russell cites Psycho as a key influence and he’s not invoking Hitchcock’s classic casually. [Warning: Some vague spoilers follow.] The Blob sets up an obvious hero in Paul Taylor (Donovan Leitch), a nice, modest football hero who begins the film working up the courage to ask out Meg (future Saw heroine Shawnee Smith), a cheerleader with whom he’s been exchanging meaningful glances. Elsewhere, the mulleted Brian (Kevin Dillon) seems to be up to no good, much to the annoyance of Sheriff Geller (Jeffrey DeMunn, one of the many familiar character actors filling out the cast). And just like Paul, Sheriff Geller has only recently managed to ask out his crush, Fran (Candy Clark), a waitress at the local diner.

If you think you can guess who the Blob will take out and in what order, guess again. What’s more, some of the characters aren’t quite who they first appear to be. While Brian’s transformation from juvenile ne’er do well isn’t that shocking, Meg’s evolution from stock girl-next-door-type into a take-charge action hero comes as more of a surprise.She’s revealed as a post-Ripley heroine in a scream-queen world — a world threatened by an ever-growing glob of goo intent on devouring everything in its path.

Russell had The Blob on his mind for years. A producer interested in pivoting to directing, he obtained the property’s remake rights and worked on a script with his friend and then-writing partner Frank Darabont. It was an idea whose time had apparently not yet come. New Line rejected the project but asked the pair to help rework the second Nightmare on Elm Street sequel, with Russell stepping up to direct as well. Working from a script originated by Wes Craven and Bruce Wagner, Russell and Darabont injected more humor and shaped it into the film we now know, in the process establishing a template that future sequels would follow (not always to their credit). Its success opened the door for The Blob, which Russell shot on a relatively modest budget, largely in the small Louisiana town of Abbeville.

It made for a picturesque place to destroy,and with special effects designer Tony Gardner, Russell found the ideal partner with which to destroy it. Now a highly in-demand makeup effects artist — his recent credits include Zombieland: Double Tap and the Sacha Baron Cohen series Who is America? — Gardner was then just getting his start after studying under Rick Baker. He didn’t expect to have quite as much responsibility as he ended up taking on, stepping up after Jim Henson veteran Lyle Conway left the production. He brought some strong notions with him. Speaking to FANGORIA in 1988, Gardner described his controlling idea for the Blob as a “giant, inside-out vampire stomach,” which neatly captures what makes this film’s reimagining of the monster so scary.That’s not the easiest task for a faceless foe, and while the original, Jack Harris-directed film did a remarkable job making the idea of a gelatinous monster work in 1958, Gardner still had his work cut out for him if he wanted to terrify audiences who grew up on much grodier material than those of the Eisenhower era.

The film pulls it off via a string of shocking death scenes that leave corpses half-digested, one would-be hero failing to escape from the bowels of the Blob, and another sympathetic character learning that phone booths aren’t Blob-proof. It keeps the momentum going in a finale that ups the scale of the set pieces by recreating the original’s most famous scene in which the Blob attacks a movie theater then the center of town itself.

It’s a highly satisfying update of a monster movie classic that lives up to the promise of its trailer’s tagline:

“A generation ago, a classic changed the shape of terror. It’s had 30 years to grow bigger, meaner, and faster.”

So why didn’t audiences flock to it in 1988? The answer might lie within the film itself. When the action shifts to the downtown theater, it’s playing a movie called Garden Tool Massacre, which one character describes as “your basic slice-and-dice.” (The dead-on slasher parody of the film-within-the-film alone makes The Blob worth a look.) Though it contains no shortage of memorably staged kills, The Blob doesn’t match that description, making it an odd fit in a horror year dominated by series sequels (and the first Child’s Play movie). It also didn’t wow critics at the time. In the Detroit Free Press, Robin Givhan called it “vile” and lamented that it lacked the fun of the original. Writing for The Philadelphia Inquirer,Desmond Ryan lamented the paper’s rating system required him to give it one star when really it was “not worth one blob and charging admission to it amounts to highway robbery.”

Time has been on this Blob’s side, however, making it hard to see why so many overlooked such an efficient film packed with memorable effects and kinetic action scenes.And where the original looks like a catalog of high-’50s fashion and home decor, Russell’s version looks much the same for the late-’80s. (Dillon’s haircut is just the start.) It’s also tied to the era in other ways, capturing the potential of practical effects at a kind of high-water mark just before CGI started to take over. (A couple of early CGI effects even creep in some small enhancements that make some Blob bits twinkle.) A couple of years later, and it might have looked like one of those post-Jurassic Park disasters in an era when no one quite new what to do with all the shiny new tools they’d been handled.

Furthermore, if the ’88 Blob doesn’t offer quite as much subtext as the era’s other horror remakes, subtext isn’t entirely absent in a film that touches on the shadow workings of government organizations that aren’t above sacrificing a few innocents for the greater good and includes a pastor (played by Chicago improv legend Del Close) whose encounter with the Blob pushes him toward apocalyptic ravings. As it oozes through a quintessential American town, the Blob picks up a lot of Reagan-era baggage along the way. Or, as Russell puts it on the audio commentary, movies tend to “develop a theme or metaphor whether you think of one or not.” That The Blob took on a new life in the VHS era that’s carried on into the present is really no surprise. Some monsters can be contained but never really killed.

Keith Phipps writes about movies and other aspects of pop culture. You can find his work in such publications as The Ringer, Mel Magazine, Vulture, TV Guide,  Decider, Polygon and The Verge. Keith also co-hosts the podcast The Next Picture Show and lives in Chicago with his wife and child. His all-time favorite horror film is Dawn of the Dead but he’s still baffled by the moment when the biker decides to use the blood pressure machine in the middle of the zombie attack. Follow him on Twitter at @kphipps3000.