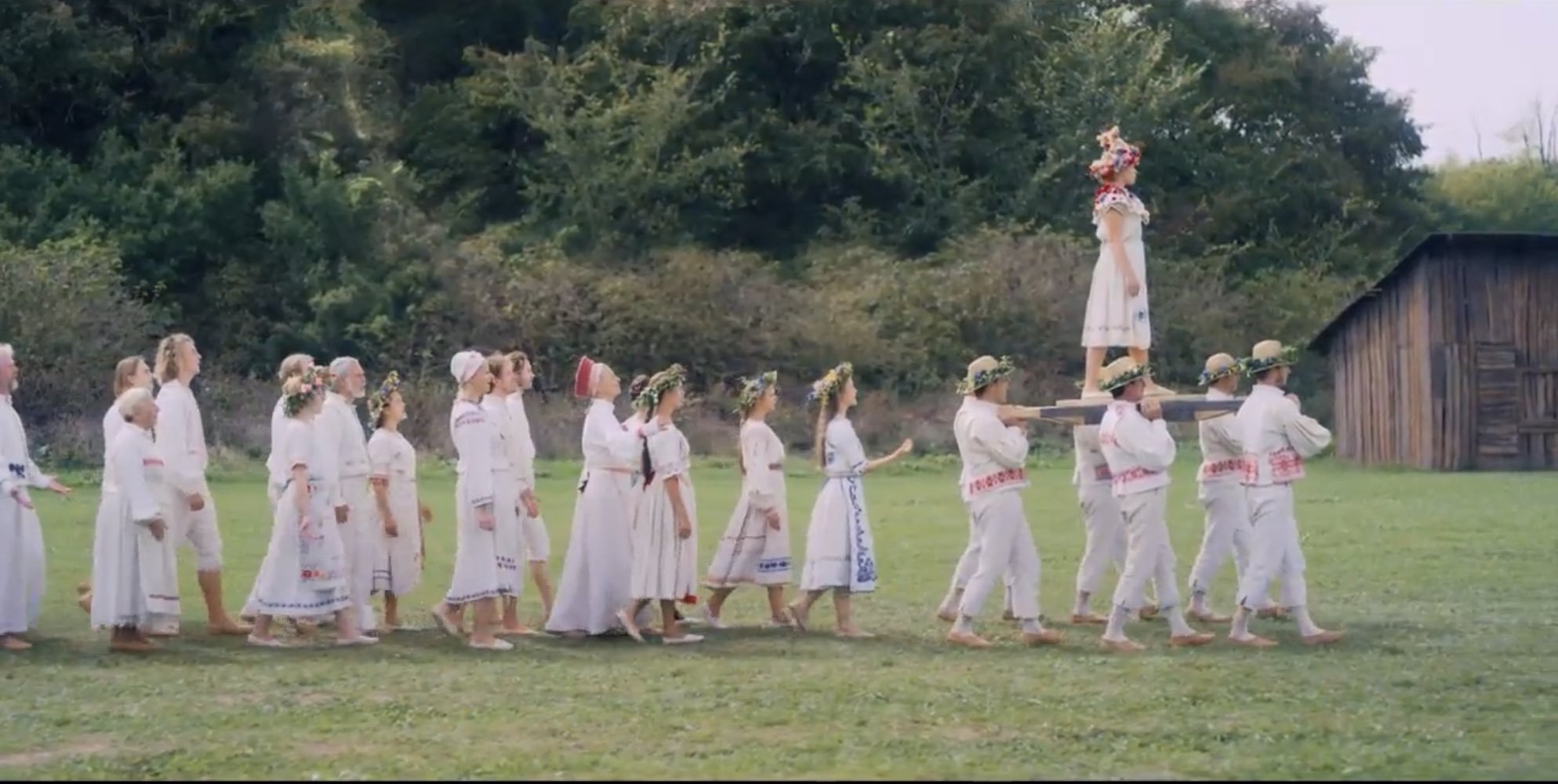 With A Quiet Place Part II scheduled for release in March, 2020, now is the time to catch up with 2018’s intense thriller from writer-director John Krasinski, a long way from The Office. Perhaps even more surprising is the producing credit given to Michael Bay – this is not the sort of film you would expect from Mr. Big-Budget, High-Concept, Major-Explosions Action Film; in fact, it is in every possible way the opposite of the prototypical Michael Bay film. While its $17 million budget doesn’t put it in the bargain-basement category, it is a modest, even minimalist, film, with no dialog through most of its run-time, and only fleeting glimpses of the monsters that are a palpable threat throughout.

The year is 2020, and Earth has been infested by a species of solidly-armored aliens that hunt their prey solely by sound. A family – husband and wife Lee (Krasinski) and Evelyn Abbott (Emily Blunt, Krasinski’s real-life wife), their congenitally deaf daughter Regan, and sons Marcus and Beau are salvaging necessities from an abandoned town, where young Beau finds a toy space shuttle. Lee takes the noisy toy away and removes its batteries; but when their Dad’s not looking, Reagan returns the batteryless toy to Beau, who also takes the batteries when Reagan looks away. Shortly thereafter, we get our first glimpse of a monster as it annihilates the youngster at play.

Dissolve to a year later; the remaining four Abbotts are still scrabbling for existence; Evelyn is now expecting a child, so bearing a child in silence will soon be a task she will face, while Reagan is racked with guilt over the death of her brother, and doubt that her father’s love for her has survived Beau’s death.

Krasinski has said in interviews that it was the family story, not the scares, that drew him to the project, but the care he gave to the family’s story is exactly what makes the story work so well.

Writer-director Ti West can generally be counted on to deliver good-to-superior results in each of his horror outings, and, in recent years, as he has repeatedly demonstrated his competence and earned the right to “spread his wings” creatively, we’ve been able to watch his creative growth, project by project.

Inspiration for The Innkeepers came to West when he and his crew stayed at Connecticut’s Yankee Pedlar Inn while shooting House of the Devil in 2009. As tales of how the Inn came to be haunted circulated among the crew, a few of them were weirded out. After House of the Devil wrapped, West wanted to do a ghost story, and decided that the story of the Yankee Pedlar was the perfect fit.

Some of the actual history of the inn was incorporated into the screenplay; Room 353, where the inn’s first owner died, is a center of the film’s supernatural activities. But if you’re not a believer in the supernatural, neither is West; he leaves plenty of room for speculation on the real reason for the terrors on screen.

One yardstick that measures the distance between Overlord and most any other major-studio genre film is director Julius Avery’s loudly-stated preference for practical makeup effects over CGI effects. This is music to my ears; like many other monster lovers, nothing takes me out of the state of horror samadhi faster than the dawning realization that, without my consent, the story I am watching has become a digital cartoon.

Which is not to say that I oppose all use of digital effects; in The Perfection, for instance, I’d have been far less pleased if the filmmakers had used practical effects in the bug-vomit scenes. There’s a time and place for everything. For my taste, animated bugs are every bit as good as bugs in an actor’s mouth, while bigtime movie monsters should be visible on-set.

The plot of Overlord concerns several American soldiers who are dropped behind enemy lines the day before D-Day and stumble into secret Nazi experiments meant to create super-soldiers; thousand-year soldiers to support the “thousand-year reich.” While most other reviewers refer to Overlord as a zombie film, at no time did it occur to me that the monster Nazis were zombies – they seemed to me to be badly broken super-soldiers. That may be one reason the plot seemed fresher to me than it did to some critics; nothing in the monsters’ behavior screams ‘zombie’ to me, even after reading other people’s reviews.

My patience did grow thin, however, waiting for the horror plot to get in gear; the movie is halfway through before the super-soldier serum appears to move the plot along; prior to that, occasional glimpses of villagers mutated by Nazi experiments are all we have to suggest greater terrors to come.

But they do come, and they prove well worth the wait. It causes me to look forward to Samaritan, even though most observers think the prospects for a superhero movie starring Sylvester Stallone are dim.

Ari Aster’s Midsommar is not, in my opinion, the film most critics will tell you it is.

It is generally classified as a horror film, a genre it does not at all fit comfortably. It resembles in some ways The Wicker Man, another film that doesn’t rest comfortably in the category; like that film, it examines the alien nature of our culture’s pagan roots and derives fear from our limited capacity for understanding ourselves.

Dani Ardor is a college student whose life loses its moorings after her sister Terri kills herself and their parents by filling their home with carbon monoxide. The tragedy worsens Dani's already-troubled relationship with her boyfriend, Christian Hughes, a graduate student of cultural anthropology. Without informing Dani, Christian arranges to take a trip to observe the midsummer celebrations of the Harga, a Swedish commune that holds a major festival once every 90 years.

When Dani is clearly hurt by her exclusion from Christian’s plans, he hastily changes plans to include her, but Dani remains hurt. They proceed with the trip, but their encounter with the Harga proves to be far stranger than anyone could anticipate.

I’ve watched Midsommar three times, and still don’t feel confident that I understand what Ari Aster intends to say. But the film sticks with me, as if ready to make a delayed delivery at some as-yet unscheduled moment.

One Cut of The Dead (Shudder)

You can’t make a movie for $25,000 and expect it to go much of anywhere, but writer-director Shinichiro Ueda has watched his modest zombie parody gather $30.5 million in box office receipts worldwide. Ueda has written and directed two more comedy features since -- Aesop’s Game and Special Actors. Trailers for both films can be found on YouTube, and are amusing, but neither has come near to rousing the interest of his debut. The main difference between Special Actors and One Cut (both films involve confusion between real life and “reel” life) seems to be the absence of zombies in the former.

One Cut of the Dead concerns the effort to make a zombie action film in real-time, with no cuts. The film opens with a quick-moving 37-minute sequence that, indeed, appears to have no cuts, and the film-within-a-film tells the tale of a movie crew shooting a zombie apocalypse drama, as they are themselves attacked by the undead.

I doubt that I’m spoiling anything by saying that it is left up in the air for some time whether or not there are any actual zombies afoot.

The film is, basically, Day For Night with zombies, and is therefore highly recommended to zombie fans who also have a soft spot for the French New Wave.