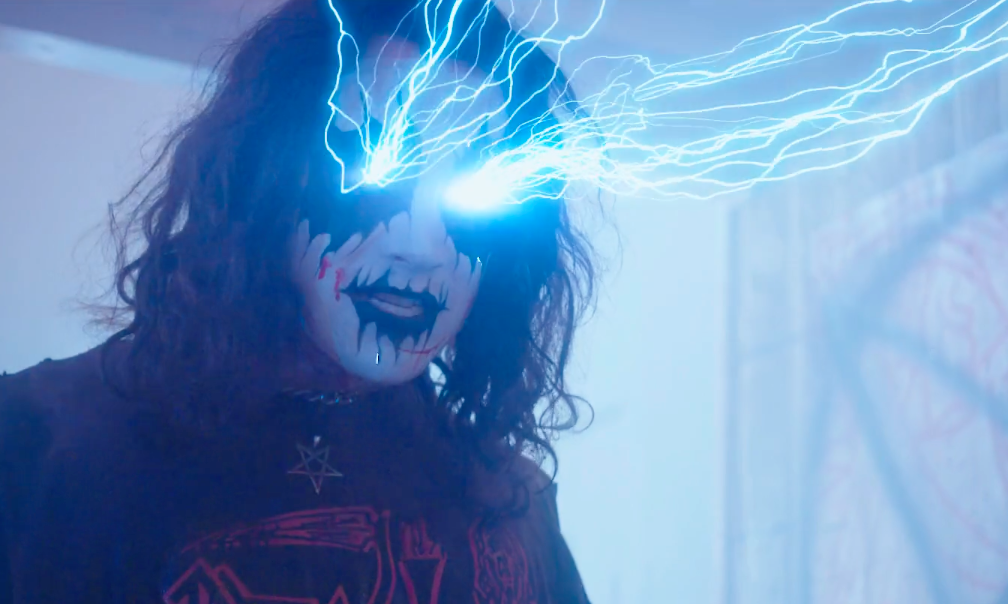 Hereditary is the kind of movie that gets to me. That has little to do with the fact that it’s a very well made film; it has more to do with its concern with the world of the spirit, which it takes very seriously.

No matter how far I drift from the sweet young Catholic boy I was, he is never far from me, and horror movies with a religious or occult basis have always troubled his mind.  I actually prefer that such movies be objectively bad, because then I can handily dismiss them, and never give them another thought.

At the funeral of her secretive mother, Annie Graham (Toni Collette) delivers a eulogy that attempts to explain her mother’s difficult personality. Afterward, she returns to the home she shares with her husband, Steve; their 16-year-old son, Peter; and her emotionally troubled 13-year-old daughter, Charlie. Peter is in class, ignoring a lecture on the play Herakles by Euripides, a play well known for raising more questions than it answers.

A week passes; Steve is informed that his mother-in-law’s grave has been desecrated by persons unknown, and Annie attends a support group for the bereaved, where she reveals that her family has suffered from mental illness that, in some cases, has resulted in their deaths.

Peter is going to a party with friends, and Annie forces him to take Charlie with him. While there, an unsupervised Charlie falls prey to her nut allergy. As Peter drives her to a hospital, she leans out of the window for air and is decapitated by a telephone pole as Peter swerves to avoid roadkill. In shock, Peter simply drives home and goes to bed, leaving his sister's headless corpse in the car for their mother to discover the next morning.

As he deals with his tremendous guilt, Peter is subsequently haunted by Charlie's presence around the house, while Annie turns to a spiritual medium she’s met through her support group to relieve her loss.

I’ll spoil no further, but I must tell you that watching this film three times has not answered all my questions, yet I have enjoyed it more each time. The entire cast is first-rate, especially Tony Collette in an arduous role. It has made me anxious to see Ari Aster’s second feature as writer-director, Midsommar.

It would be easy to dismiss Darren Aronofsky’s mother! as a pretentious fable, from its lower-case, punctuated, title, to its credits’ use of pronouns instead of names, and the clearly allegorical content of its storyline. But none of this is cause for worry. If you relax in your seat and let the story take you where it will, horror fans will be pleased by the trip.

mother! is the story of a poet (Javier Bardem) and the muse (Jennifer Lawrence) who provides him with a home; they are visited by a man who claims devotion to the poet’s work, accompanied by his wife, and, soon after, by their two warring sons. Despite the objections of his muse, the poet welcomes the devotee and his relations into his home. Over time, it becomes increasingly clear that the home the muse provides is a living extension of her self, and the intruders’ invasion of that home will extract a terrible price.

After viewing mother!, one can spend much time interpreting its meaning, or in determining its relation to the Book of Genesis, but none of that is necessary; the film stands powerfully on its own.

The Babadook (Showtime via Hulu)‍

The Babadook is, in most ways you might look at it, a very simple film. To see it in its simplest form, seek Jennifer Kent’s short film Monster on Youtube; in ten minutes, it displays all the elements of the feature, many of them fulfilling exactly the form and purpose they would in the finished film. Which is not to say that the film is shallow or understated; far from it.

The story concerns young Samuel and his mother Amelia, and their difficulty dealing with the fact that, each time they celebrate Sam’s birthday, they also commemorate the death of Amelia’s husband Oskar, due to a fatal accident en route to the hospital. In his six years, Samuel has taken on a protective role toward his Mom, learning to build home-made weapons to battle the monsters that fill his imaginary world, and by learning magic tricks to distract her from imagined danger. At story-time one evening, Sam pulls an unfamiliar book from his collection, entitled Mister Babadook; the book seems normal enough at the outset, but quickly turns threatening in its tone and imagery. Amelia grows more upset with the book as she realizes that Samuel believes that the upsetting story it tells is real. To protect them both, Amelia rips the book to pieces, but that is not the last they see of the book, nor of its very persistent host.

And it won’t be the last we see of director Jennifer Kent; she is now very close to signing a deal to direct a film drawn from the book “Alice + Freda Forever: A Murder in Memphis,” concerning the horrific end of a lesbian love affair.

By whatever yardstick you select, Ben is a downright awful movie. Having just watched it for the second time in nearly 50 years, I can say with confidence that it sucks today for the same reasons it sucked then: no scares to speak of, barely a plot at all, use of childhood illness to substitute for any real heart, and more. Yet…it entertains! Careful attention is given to the friendship between young Danny (Lee Montgomery, who would later return to horror for Burnt Offerings in 1976 and Night Shadows – aka Mutant – in 1984) and the titular rat; especially endearing is the sequence in which Danny composes a song about friendship for his rat, and then dances around his room while playing on his harmonica the tune that won the film a Golden Globe for best original song in 1973.

At the start of Deathgasm, Brodie (Milo Cawthorne) has just moved to a new town, after his meth-freak mom got busted while trying to fellate a Santa in a crowded mall (so it’s a Xmas movie!). Staying with his ultra-religious aunt and uncle, Brodie finds little better to do than hang with D&D nerds, until he discovers Alien Records, purveyors of sick metal, where he meets his brother in steel, Zakk (James Blake). Brodie also notices the prettiest girl at school, Medina (Kimberley Crossman), who is dating his jock cousin. Brodie and Zakk form the band Deathgasm, and by playing some music left behind by their vanished metal idol, inadvertently bring forth a demonic force known as The Blind One, thus plunging their world into demented bloody chaos. Can the rockers survive, and avert the end of the world? Can Brodie get the girl? Can the girl whup hot demon ass?

Good questions, those are, and the path toward the answers is covered in cheese. Delightfully cheesy practical and optical FX, affectionately cheesy dialog, and cheesy-but-shredding metal riffs keep up the pace for a white-hot steely fondue. I’m keeping my eyes open for writer-director Jason Lei Howden’s new action-comedy Guns Akimbo.
‍