Three To Watch: The Good, Better And Best Of Killer Kids 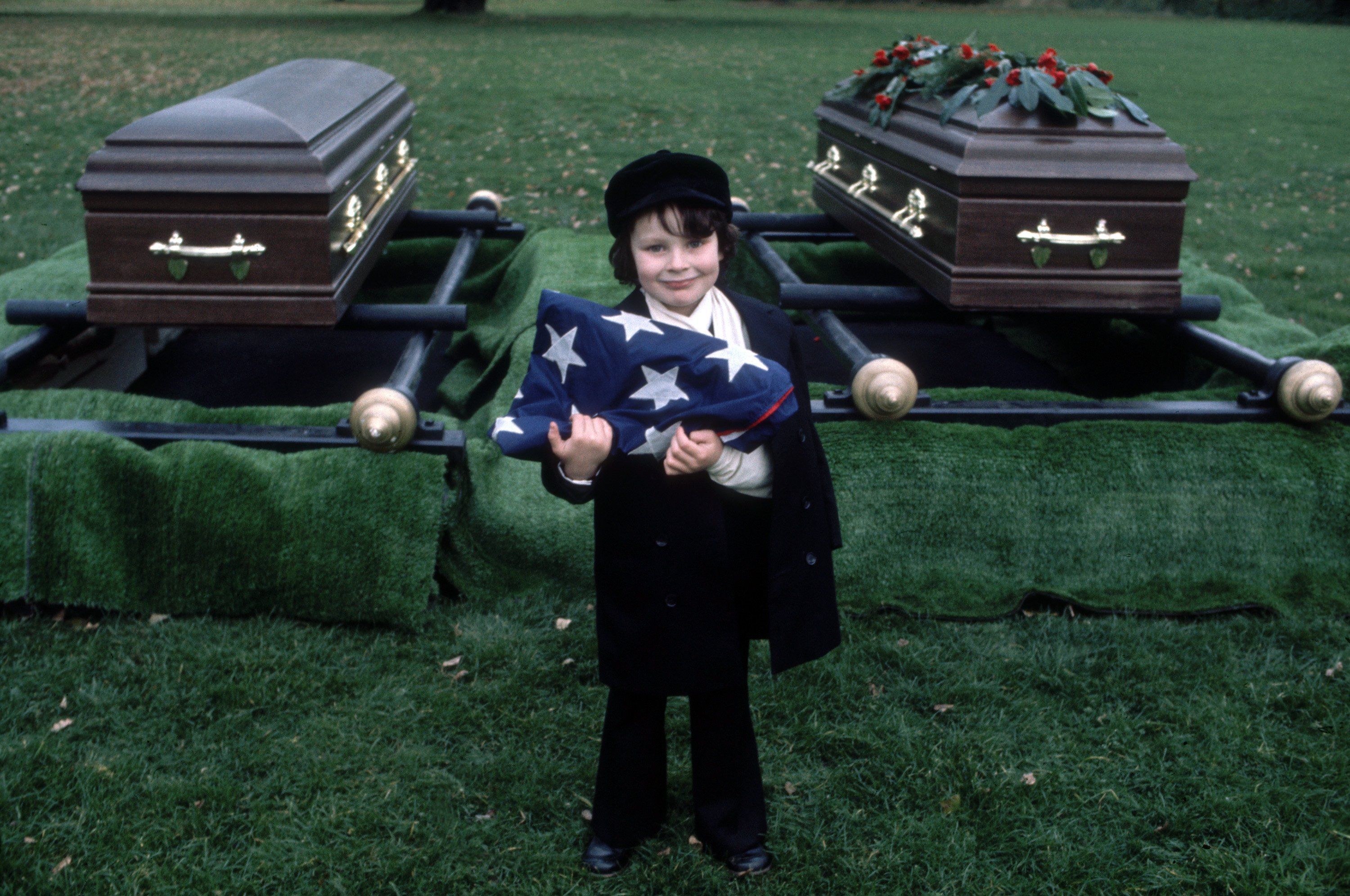 There are other killer kids besides Damien, you know. That's why he's smiling.

Three To Watch: The Good, Better And Best Of Killer Kids

‍Want to explore a theme? Three to Watch hopes to put some potential triple features on your radar. This installment looks at movies about killer kids.‍

iller children have long been a staple of memorable horror films, from Village of the Damned to The Omen to Let the Right One In. (Sort of. Do kid vampires count?) What makes evil kids scary? Some of the same qualities that make regular kids scary. Cute as they are, kids haven’t developed a sense of judgement or a coherent moral code, meaning they’re capable of just about anything. Also, they’re here to replace us. To become a parent is to take an important step toward acknowledging one’s own mortality. (Also, they’re small and sneaky, like gremlins.) If you’ve seen the movies referenced above (and The Bad Seed, Children of the Corn and It’s Alive) and want more, here are three more that are each worth your time, each in its own creepy way.

It wasn’t unusual for films to make the grindhouse and drive-in rounds under different titles, but The Devil Times Five traveled longer and under more names than most. It played parts of the South and Minnesota as Peopletoys in 1974, then as Horrible House on the Hill in the rest of the Midwest and Texas in ’74 and ’75. By the time it opened in Los Angeles in 1979, it could boast some actors who had by then become ’70s icons: Sorrell Booke, best known as Boss Hogg on The Dukes of Hazzard and teen idol Leif Garrett. That Garrett looked a lot younger undoubtedly provided a clue that the movie had been around for a while. The film wasn’t done, either, showing up as the second half of drive-in double bills as late as 1984.

Did quality keep it alive? Certainly not. Though the Los Angeles Times review called it “a taut, well-directed, and scary horror movie,” it’s really none of the above. It is, however, an unusually nasty go-for-broke movie that doesn’t let its tiny budget get in the way of strange thrills — even before the plot kicks in. The film’s opening minutes feature a wild bus crash, an out-of-nowhere catfight, and one of the most awkward seduction scenes you’ll see anywhere. By the time a group of insane children start killing the deeply unpleasant adults vacationing at a snowbound mountain cabin, it plays like just another odd development in a film full of them.

Sam Fuller regular Gene Evans stars as Papa Doc, a hospital tycoon (or something of that nature; it’s not clear) who rules his family and employees with an iron fist, even those he takes with him on vacation. These include a cheating wife named Lovely (Carolyn Stellar) and Booke as his simpering employee, Harvey. The film spends a lot of time on their squabbles (and way too much time on Lovely trying to seduce a developmentally disabled groundskeeper). But it also effectively sets up a wild final act in which five escaped juvenile mental patients (including one pretending to be a nun supervising the others) kill the awful grown-ups. Not only does the film feature a Chekov’s gun, it features a Chekov’s gun rack and a Chekov’s piranha to boot.

The brio with which The Devil Times Five stages its killings helps make up for the cheap production values. (The actors’ hard shadows could almost count as co-stars.) It’s badly patched together, in part because the credited director, Sean MacGregor, turned in a 38-minute cut that required extensive reshoots, according to a 2006 audio commentary. Get past that, however, and you’ll get to enjoy a strangely peppy score by the prolific stock cue composer William Loose, see one nasty snowman and a strange conclusion that promises this is just “The Beginning” rather than “The End.” And, in a way, that’s right. The film had life after life for a decade, and it’s a nasty oddity no matter what you call it. (Available on Amazon Prime and archive.org. The Code Red DVD and Blu-ray have sadly gone out of print.)

‍Another film that looked a little dusty when most audiences first had a chance to see it, Bloody Birthday was filmed in 1980 and seems to have rolled out across Europe throughout the early ’80s before making a limited U.S. debut in 1986. By then, horror had largely moved on from slasher films with holiday themes. But Bloody Birthday is no ordinary slasher movie. Though it boasts a body count of dead teens to rival any movie of the era and it looks like dozens of cheaply produced movies made in an attempt to siphon off some Halloween money, its plot owes more to the sort of lurid, high-concept horror-fiction shockers covered in Grady Hendrix’s Paperbacks from Hell.

Directed by Ed Hunt (Starship Invasions) and co-written by Hunt and Barry Pearson (Firebird 2015 AD), Bloody Birthday takes a few moments to establish its premise with a scene in which three California women give birth during a total solar eclipse. (Off camera, because who can afford a hospital set for one scene?) This apparently is bad timing, as ten years later the trio of two boys and one girl have transformed into relentless, if sneaky, killing machines in the days leading up to their 10th birthday. Their bloody pre-birthday exploits include killing a pair of teens as they prepare to have sex in an open grave (a questionable choice for any number of reasons); taking out a sheriff (never mind that he’s the father of Debbie, the little girl killer); and the classroom killing of a hated teacher (played by Susan Strasberg). All the while, their small California burg carries on as if nothing that out of the ordinary was going on, despite the suspicions of Joyce (Lori Lethin), a teenaged astrology enthusiast.

Hunt doesn’t have any particular talent for staging the film’s scenes of mayhem, but Bloody Birthday’s willingness to go where other films wouldn’t dare sets it apart. The killer trio uses every weapon at their disposal, from guns to shovels to arrows to ant poison, and they deliver their kills with chilling little-kids-in-a-toy-commercial smirks. To find much in the way of commentary requires digging pretty deep, but Bloody Birthday’s depiction of unsupervised children running amok in suburban cemeteries, junkyards, and unattended homes at the turn of the ’80s owes at least a smidge to Jonathan Kaplan’s great Over the Edge. Beyond that, Bloody Birthday has a sleaziness that matches that of most early ’80s horror movies — and one moment that outdoes most of them. One endless scene reveals that Little Debbie makes money on the side by charging her classmates to watch her sister Beverly (future MTV fixture Julie Brown) undress while Hunt’s camera keeps cutting back and forth between Beverly’s naked body and the leering 10-year-olds getting an eyeful through a hole in a closet.

Predictably, the film didn’t exactly wow critics. It earned a one-star review in the Philadelphia Inquirer and The (then) Atlanta Constitution dismissed it as “vile.” That might be overkill. It’s a decidedly un-terrifying film whose clunkiness now looks kind of charming, thanks in no small part to some truly terrible performances from its killer kids. That might help explain why it’s picked up a small cult following that’s grown as it cycled through the VHS, DVD, Blu-ray, and streaming incarnations, even playing as a TCM Underground selection. Some films are just too odd to be forgotten. (Available on Blu-ray via Arrow Films and streaming on Shudder.

‍Like The Devil Times Five, the Spanish thriller Who Can Kill a Child? has resurfaced again and again under different titles. But the original remains the best. It both poses the question the film’s protagonists must ask themselves as they fight for their lives and the more philosophical question at the heart of the movie. In its uncut form, Who Can Kill a Child? opens with a credits sequence that rolls out slowly over footage of dead children from the Holocaust, the Vietnam War, and other conflicts. Its inclusion is of questionable taste, to say the least, and the credits’ eight-minute running time borders on torture. But it also sets a somber mood that bleeds into the rest of the film while more or less justifying the homicidal impulses of children growing up in a mad world where, as one character observes, “it’s the children that always suffer the worst.”

Lewis Flander stars as Tom, an English biology teacher who’s decided to take his pregnant wife Evelyn (Prunella Ransome) to the remote Spanish island where he vacationed ten years before. All goes well until they arrive to find the place devoid adults, devoid of much of anything but a few menacing, smirking kids who keep their distance from the visitors — for a while. Rather than making a beeline back to the mainland, Tom and Evelyn poke around the island, finding increasingly alarming signs that the kids are not all right (and that the adults have probably died because of it).

The plot requires the central couple to make one stupid mistake after another, but director Narciso Ibáñez Serrador (The House that Screamed) makes their stupidity easy to overlook thanks to his controlled direction, which turns the tension up to the boiling point one degree at a time. The climax turns disturbing both because of the extremes the film eventually reaches and because Tom and Evelyn’s escape might depend on them taking the life of children, an unthinkable act even under these circumstances.

‍Who Can Kill a Child? owes a little to Night of the Living Dead, but Serrador’s true inspiration comes from The Birds, particularly in the scenes where children slowly, silently form an overwhelming mob. As Hitchcock did with birds, Serrador treats the island kids as creatures touched by forces beyond their control who might be justified in their rampage. “The film is about the rebellion of the children,” Serrador says in an interview included on the Mondo Macabro Blu-ray, “because in a certain way, the children are the main victims of what, consciously or unconsciously, adults bring about. […] We kill them with war, we kill with bombs, we kill them with famine. The children are always victims.” Except that is, when they’re not. (Available on DVD and Blu-ray via Mondo Macabro.)

Keith Phipps writes about movies and other aspects of pop culture. You can find his work in such publications as The Ringer, Mel Magazine, Vulture, TV Guide,  Decider, Polygon and TheVerge. Keith also co-hosts the podcast The Next Picture Show and lives in Chicago with his wife and child. His all-time favorite horror film is Dawn of the Dead but he’s still baffled by the moment when the biker decides to use the blood pressure machine in the middle of the zombie attack. Follow him on Twitter at @kphipps3000.