The Wet World Of Underwater Horror 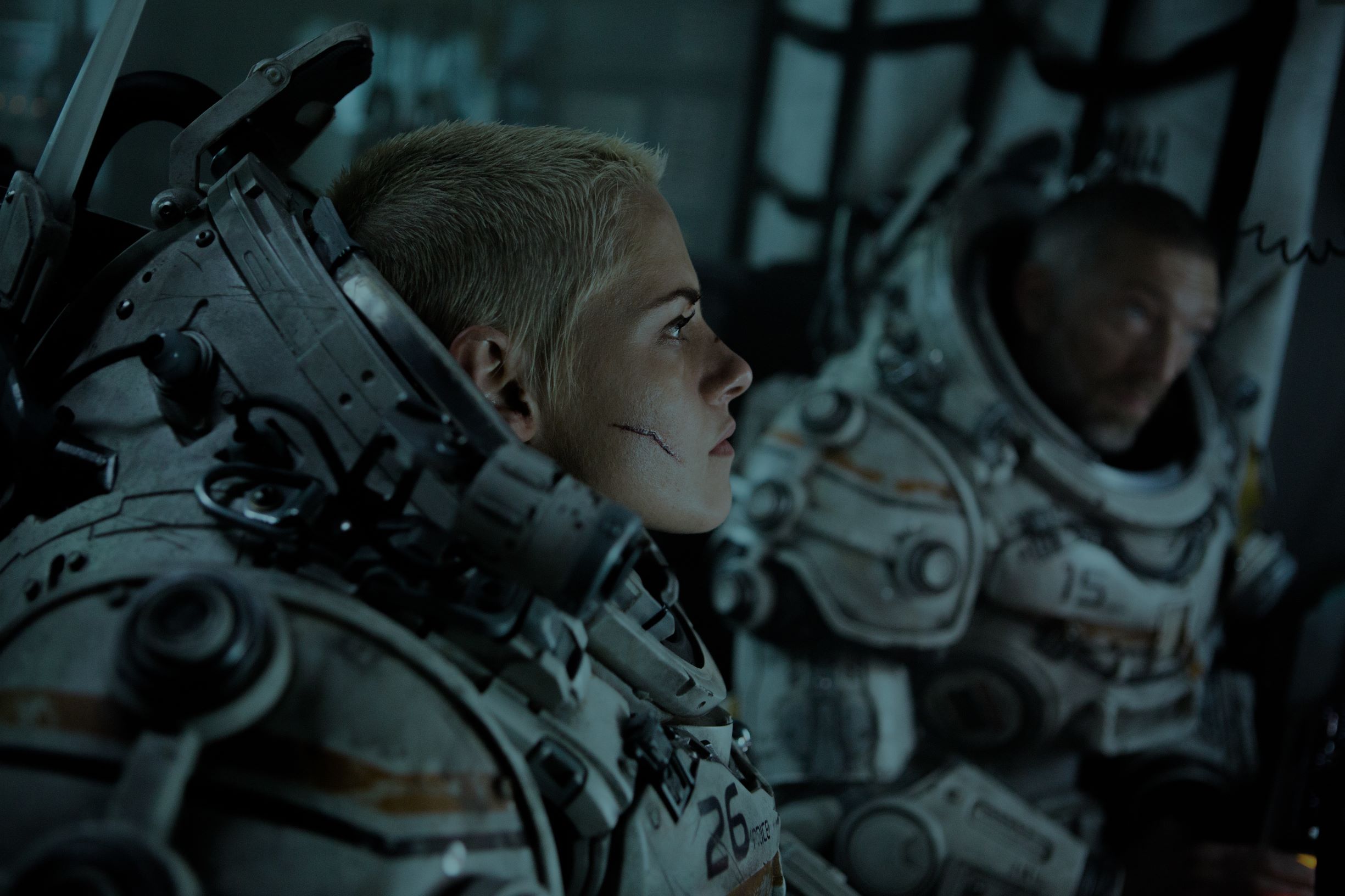 Kristen Stewart and Vincent Cassel try not to get wet (or eaten) in "Underwater."

The Wet World Of Underwater Horror

n space, no one can hear you scream. Deep beneath the sea, your screams might make a sound, but you’re bound to get little more than lungs full of water for the trouble. Ever since Ridley Scott’s Alien trapped a bunch of blue-collar workers in space and turned them into snacks, Hollywood’s reaction has been to copy the formula with a liquid twist: instead of trapping potential victims far out in space, it would strand them beneath the surface of ocean. There have been plenty of Alien knock-offs in space, but it’s underwater horror that seems to be most influenced by Scott’s 1979 classic.

There’s logic here. Like much of the vast reaches of space, the sea remains a mystery – 95% of the world's oceans and 99% of the ocean floor remain unexplored. Who knows what terrible, slimy things are lurking down there? And who knows how hungry they are? Only one way to find out: go deep. In January 2020, cineplexes will get wet all over again with Underwater, a new aquatic horror story starring Kristen Stewart and her cool haircut. That film will be following in the soggy footsteps of so many underwater Alien clones that made a splash before.

Movie theaters saw a veritable tidal wave of these types of films in 1989, with three different incarnations of this theme. Sean S. Cunningham’s DeepStar Six, the dullest of the three, has the same type of working-class schlubs that populated the Nostromo in Alien. Sure, some of them are science officers, but they’re all mostly average folks griping about the crappy food they have to eat, the low pay they’re earning, and the tasks they have to perform. There’s even a no-nonsense female character all the males think of as bossy, a la Ripley. Our heroes are stuck deep below, testing underwater colonization methods while installing a nuclear storage facility. But all their briny poking and prodding awakens a beastie that looks uncannily like the Demogorgon from Stranger Things.

DeepStar Six takes the “less is more” approach to its monster, waiting a full hour before letting us see the creature. Alien took its time, too, but it had atmosphere and memorable characters to keep us enthralled. DeepStar Six has none of that, and the movie doesn’t come to life until the monster shows up and starts biting people in half. Even then, the proceedings are painfully boring – about as adventurous as sitting in a plastic kiddie pool in your own backyard. The one true highlight doesn’t even involve the monster, but instead features actor Miguel Ferrer failing to depressurize before trying to head to the surface in an escape pod,and literally exploding in the process.

George P. Cosmatos’ Leviathan fares a bit better, mostly because it apes the Alien formula even more, and does a better at it. Like the Nostromo crew following a distress signal to LV-426 only to discover some very bad things, an undersea mining operation comes across a Soviet shipwreck. There are no alien eggs here,though. Instead, there’s a flask of mutated vodka (those pesky Russians and their damn vodka, right?). Soon, our undersea miners are transforming into Lovecraftian nightmares, complete with tentacles. The script, courtesy of David Peoples and Jeb Stuart, is riddled with clichés and ideas pulled from better movies (including John Carpenter’s The Thing), but it helps that the movie boasts a likable cast that features Peter Weller, Richard Crenna, Daniel Stern, and Ernie Hudson, most of whom end up as monster-fish food.

Before 1989 ended, audiences would be blessed with one last aquatic adventure – one that towered above the rest. James Cameron’s The Abyss owes more than a few things to Alien: here, again, are blue-collar workers – practically deep-sea truckers – trapped together in peril. There’s horror peppered throughout Cameron’s sci-fi story, but it’s more of an adventure than a full-blown fright film. It’s also the best of the 1989 deep-sea sagas, thanks to Cameron’s meticulous directing, ground-breaking effects work from ILM, and a well-developed love/hate relationship between the leads, an estranged husband and wife played by Ed Harris and Mary Elizabeth Mastrantonio.

Besides sharing a debt to Alien, all three of the 1989 aquatic movies contained the same message: deep sea exploration is dangerous, and it’s probably best to not take a gig on a state-of-the-art underwater facility.

The lesson was learned, for a while at least,because it would be almost ten years before audiences were given the opportunity to head back beneath the waves. Barry Levinson’s 1998 Sphere had the pedigree of being an adaptation of a book by Michael “Jurassic Park” Crichton, and a cast that featured Dustin Hoffman, Sharon Stone, and Samuel L. Jackson. But the end result is so dull it makes DeepStar Six look like a masterpiece. Levinson abandons any concept of tension, or even wonder, and his cast looks altogether bored as they play characters exploring a 300-year-old spaceship at the bottom of the Pacific Ocean. Time travel, mind control, and a giant squid that the budget can’t afford to show us, all turn up – yet watching Sphere is as entertaining as watching algae grow on waterlogged rocks.

A year later, another Samuel L. Jackson movie about an underwater base under siege would fare a heck of a lot better. Renny Harlin’s gloriously goofy Deep Blue Sea had the brains to realize that no shark movie can ever top Jaws, so rather than rip off Jaws, Harlin ripped off Alien instead. Deep Blue Sea is essentially Alien, But With Sharks, as a group of scientists and other saps in an underwater facility have to deal with super-smart, super-deadly sharks that have been genetically enhanced.

Deep Blue Sea swims where other films in this subgenre sink because it has the common sense to embrace its B-movie trappings. Alien was a B-movie concept elevated to art thanks to Scott’s direction, impeccable casting, and iconic production design. None of its underwater clones – save The Abyss – come anywhere close to this, yet they all operate as if they’re unaware of the fact. Not Deep Blue Sea. It’s happy to have nothing new up its sleeve, and revels in overloading its narrative with big, dumb, entertaining moments where foolish humans become shark food.

In 2002, the underwater facility concept was given a breather, but there was still plenty of deep sea terror to be had. David Twohy’s underseen undersea horror film Below takes the Alien formula and relocates it to a World War II submarine – a haunted World War II submarine. Ghosts are lurking in the close quarters of the sub, and Twohy, working with a script he co-wrote with Darren Aronofsky and Lucas Sussman, milks the claustrophobic location for all it’s worth. Below needs no moist monsters to instill terror: it has the unquiet dead, and a few insane humans, to get the job done.

Come 2018, the underwater facility concept resurfaced, this time in another shark movie – Jon Turteltaub’s The Meg. The film’s late arrival to the already tired aquatic base concept can be chalked up to years spent in development hell, with an adaptation of Steve Alten’s novel Meg in the works since 1997. The deep-sea base plays only a small part in this big shark movie, as The Meg is more concerned with getting its skyscraper-sized fish to the surface so Jason Statham can chase it down while frowning the entire time. But for a few brief, familiar moments, we find ourselves in the familiar over-lit, blue-tinted world of a scientific base beneath the waves.

You’ll be hard-pressed to find a handful of people who count The Meg as one of their favorite movies, yet the big shark tale did boffo box office – which means Hollywood can continue to embrace underwater horror for the for-sea-able future. Enter Underwater, which looks even more indebted to Alien than every other film mentioned here, right down to the long, dark corridors where something is lurking, salty and soggy, ready to feed. It’s not the first time we’ve been subjected to this, and it surely won’t be the last. After all, there’s all that unexplored ocean out there –just waiting for some dumb humans to come swimming along.

Chris Evangelista is a staff writer and film critic for Slashfilm.com. His work has appeared at Mashable, Nerdist, RogerEbert.com, Empire Magazine, Birth.Movies.Death., and more.