The Strangest Zombie Movie Ever Made: Jean Rollin’s 'The Grapes of Death' 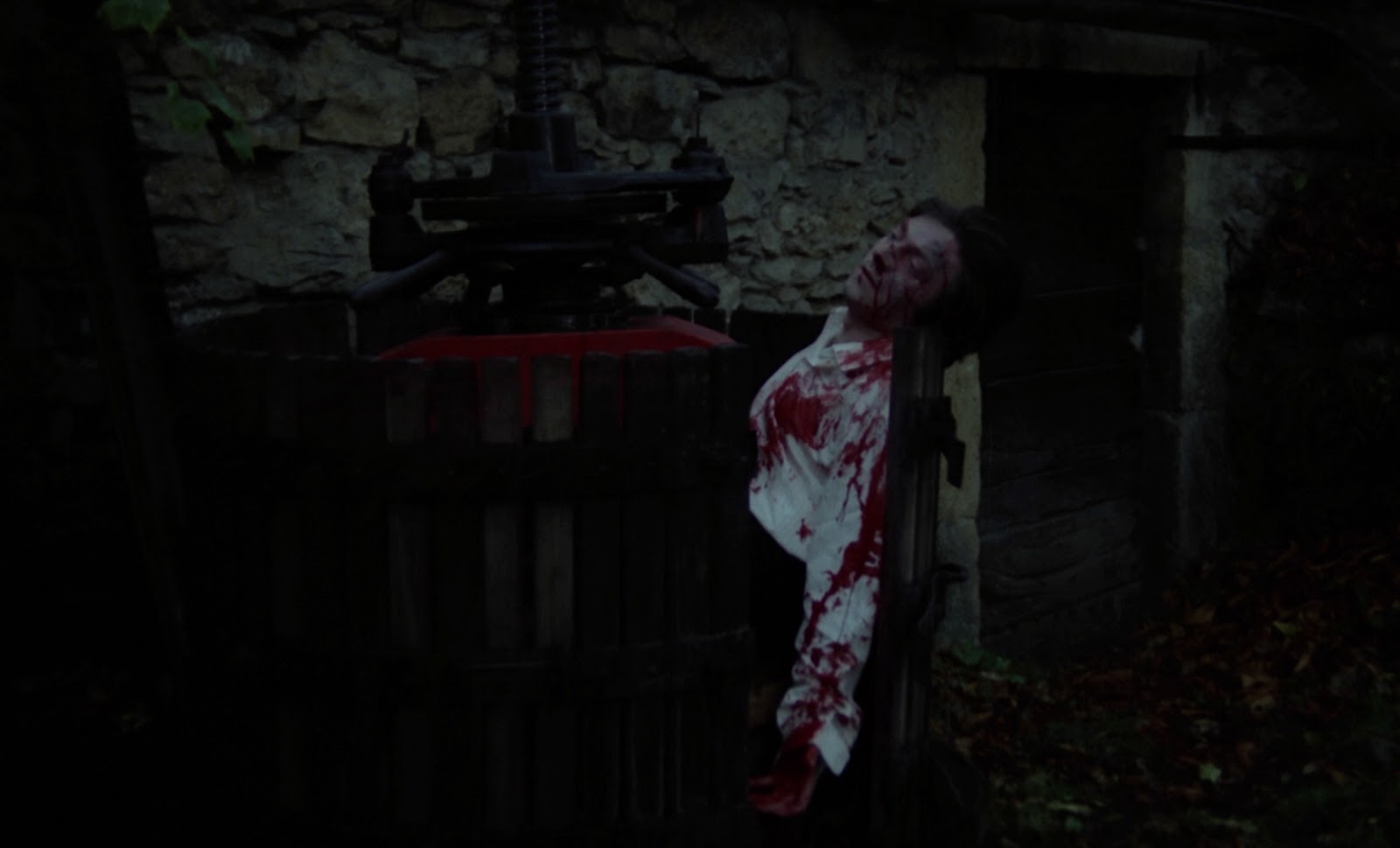 Death and dismemberment make the grade in "The Grapes of Death." (Photo: IMDb.com)

The Strangest Zombie Movie Ever Made: Jean Rollin’s 'The Grapes of Death'

he enduring fascination -- to pull from the title of one of his most famous films – with the work of French horror film director Jean Rollin doesn’t rest exclusively with sex. Certainly, much like his much-studied Euro-horror colleague Jess Franco, the surface hook for Rollin’s oeuvre is his use of overt female eroticism blended with ample bloodshed, and as with Franco, both directors have dabbled in hardcore pornography to make ends meet. But with Rollin, really, it’s that certain je ne sais quoi that keeps his admirers coming back, addicted to dissecting his pictures and pushing to have them spoken about just as seriously as the work of his New Wave countrymen such as Goddard, Truffaut, et al. More plainly put, Jean Rollin was the poet laureate of European exploitation: a true artist who found himself making movies that had to be easily classified as simple genre works and whose vision was ghettoized by distributors looking to sell his unique, personal films to unimaginative consumers seeking a quick thrill.

And while Rollin will forever be associated with his now celebrated series of dreamy, sensual feminine vampire pictures such as Shiver of the Vampires, Requiem for a Vampire, and his ultimate fanged-femme masterpiece Lips of Blood, one of his lesser discussed efforts dabbles in a different kind of undead fiend, that of the zombie.  Filmed as Pesticide, released in France as Les Raisins de la Mort, and eventually known stateside as The Grapes of Death, this 1978 ghoul-fest is indeed a story of outbreak and the murderous, mindless, diseased monsters it creates. But we promise you, The Grapes of Death is unlike any zombie film ever made, a picture that pulls in the pundits with promises of post-Night of the Living Dead frissons and then subjects its audience to meandering, mesmerizing passages of death, decay, and dream-state horror.

Taking its cues less from Romero’s famous first film than it does his 1973 chiller The Crazies (and perhaps with elements borrowed from David Cronenberg’s Shivers and Rabid), Rollin’s film sees actress Marie-Georges Pascal as Elizabeth, a young woman traveling via train with her best friend (Evelyne Thomas) to the French countryside to meet her winemaker fiancé. Unbeknownst to the women, experimental pesticides used to spray the grapes on the local vineyards have poisoned them, tainting the wine and subjecting its drinkers to a sort of living death. After an infected farmer boards the train, his face melting and his manner murderous, Elizabeth flees into the village to find help. Instead, she finds people who have devolved into a horde of psychotic, sadistic, mutated monsters, hellbent on spreading their disease and slaughtering those whose flesh is yet untouched by the weird wine.  ‍

The Grapes of Death was, by his own admission, Rollin’s most expensive film at that point and the few extra dollars in his pocket allows for a denser supporting cast (not all of them serving as shambling zombie extras) than in his previous films and blasts of effectively crude splatter, something Rollin rarely utilized and wouldn’t really dive this deeply into again until 1982’s brilliant The Living Dead Girl, itself a kind of amalgam of this film and the previously mentioned Lips of Death. But the film’s greatest assets chiefly lie – like in all of his films – with his magnetic female leads.  As Elizabeth, Pascal is a marvel; she’s Alice in Rollin’s wonderland, venturing deeper into the darkness, narrowly evading each and every horror she encounters, witness to the unspeakable, the unknowable.  She reminds me of a bit of a young Fairuza Balk, with her angled face and laser-beam eyes, and Rollin frames her astonished reactions to what she sees in a very arch, effectively theatrical manner. Pascal is matched by a pair of unforgettable supporting performances by Mirella Rancelot as the blind woman (pre-dating Cinzia Monreale’s similar turn in Lucio Fulci’s The Beyond) who is even more lost and who meets the grisliest of ends at the hands and blades of her diseased lover and the great Brigitte Lahaie (Rollin’s Night of the Hunted and Fascination), who makes an arresting final-reel appearance as an uninhibited zombie death queen who physically isn’t damaged at all but is instead festering from within. Lahaie casts a spell, with her inexplicable canine companions serving as a deliberate callback to Mario Bava’s Black Sunday, in which Barbara Steele showed up walking a similar hound.

Women almost always take center stage in Rollin’s movies; their bodies are often exposed, yes, but they are rarely graceless victims. Instead, they become fluid vessels, forces of alternately delicate and deadly nature, often maternal, nurturing and often extremely tragic. If – as director Nicolas Winding Refn believes – the act of creation itself is a feminine one, Rollin uses his on-screen women as avatars of his own creative and destructive artistic expressions. It’s fascinating to witness.

In The Grapes of Death, Rollin’s zombies aren’t the instinct-driven drones found in Romero’s films or any of the myriad subsequent ‘70s cannibal corpse films that stole from him. For one, these monsters aren’t aiming to make meals of their victims. For another, they presumably aren’t dead at all, rather their living tissue is rotting in real time, affecting their bodies and minds and causing them to kill. What makes them so frightening is that they seem to be somewhat at odds with their actions, as if some sort of satanic force was puppeteering them. Some of them stare longingly at their living prey, not acting on their impulses at all. Some engage in prolonged conversations before bursting into acts of hostility and violence. And some seem profoundly troubled by their atrocities. In the sequence where the doomed Rancelot finally meets her man, he expresses his undying love for her, alternately weeping and laughing while he crucifies her and posthumously hacks off her head. Later, when he finally expires, he reaches for his murdered girlfriend’s bloody severed skull and kisses it tenderly.  It’s both beautiful and hideous, and this dichotomy between the poetic and the pandering is what gives The Grapes of Death – and all of Rollin’s work – its soul.‍

The Grapes of Death certainly won’t please general horror fans looking for a traditional dose of escapist mayhem. It’s probably the scariest of all of Rollin’s pictures, but that’s not saying much as fear was never the focus of the director’s dark phantasmagorias. And the special effects were crude even by the standards of the time, with their slap-on forehead goop appliances and French peasant clothes, Rollin’s zombies won’t make anyone forget Tom Savini’s fiends in Dawn or Day of the Dead anytime soon. Instead, The Grapes of Death will appeal to those who seek out horror that is less interested in plot mechanics and exposition as it is in creating pure cinema as a waking dream, one that you get lost in, just like our Elizabeth gets lost in Rollin’s rural Hell. And like Elizabeth, if you enter this land, by the time the picture comes grinding to its grim halt, you’ll end up forever changed.‍

Chris Alexander is the former editor-in-chief of FANGORIA (2010-2015) as well as the editor and co-founder of cult film magazine Delirium. He is the writer, director and composer of the films Blood for Irina, Queen of Blood, Blood Dynasty, Female Werewolf, and Necropolis: Legion (produced for Full Moon Features). As a musician, he has released the albums Music for Murder, (Giallo Disco Records), Blue Eyes of the Broken Doll (Future City Records) and The Drink Your Blood. More on Alexander’s work can be found at www.ChrisAlexanderOnline.com. FB: www.facebook.com/chris.alexander.54966834 IG: @chris_alexander_films