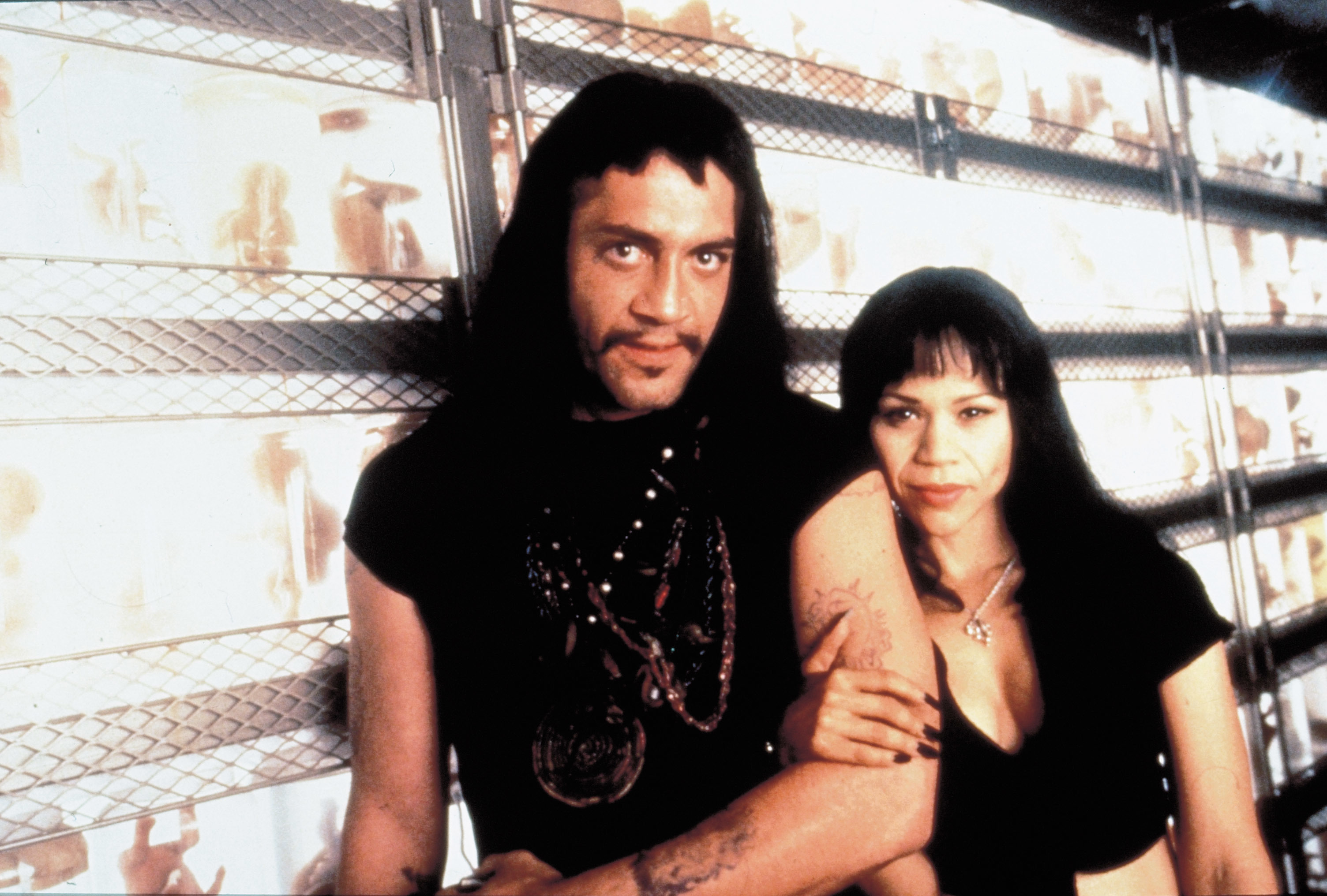 Your eyes do NOT deceive you: That's Javier Bardem, left, and Rosie Perez, taking it to the streets. The '90s were ... interesting.

Adapted from the Barry Gifford Sailor and Lula book series, the film Perdita Durango was directed by Alex de la Iglesia and released direct to DVD in the United States in 1997 under the title Dance With the Devil. The movie follows two lovers, Perdita and Romeo, on a whirlwind psychotic crime journey through Texas and Mexico. After kidnapping two “all-American” kids from Texas and having their attempts at sacrificing them thwarted by a rival gang, Perdita and Romeo get involved in a plot to smuggle a semi-truck full of fetuses from Mexico to Las Vegas, where they will be turned into cosmetic face cream. It’s a bonkers, over-the-top plot, and one that did not sit well with audiences. It makes sense: Perdita Durango is abhorrent, perverse, and sadistic -- yet, somehow, a comedy. Yet, somewhere in the weird, twisted tale, a beloved cult film was born.

David Lynch fans will recognize “Perdita” from another Barry Gifford cinematic adaptation: 1990’s Wild at Heart, where the character is portrayed by Isabella Rossellini. In 1997’s Perdita Durango, the titular role is helmed by Rosie Perez. As Perdita, Perez trades in the romantic comedy brand she was known for in the ‘90s for something far more intense. She is brassy, ballsy, unrestrained, and independent. She also is very openly sexual, even engaging in a sex scene with a disembodied rotten head as well as a rape scene -- where she is the rapist. Yeah, shit gets weird and extremely brutal in this one. Joining Perez is Javier Bardem as love interest Romeo Dolorosa, a bank-robbing, cocaine-fueled con man who celebrates his occult practices and penchant for human sacrifices. And an amazing supporting cast delivers some very memorable performances. Blues singer and shock-rock pioneer “Screamin’” Jay Hawkins provides his signature manic delivery and chainsaw laughter as Romeo’s sidekick, Adolfo. Also along for the ride is a pre-Sopranos James Gandolfini giving a hilarious portrayal of bad luck-stricken DEA agent Dumas.

During its inception, Perdita Durango was intended to be a massive stateside breakout film for Spanish director Alex de la Iglesia. Sadly, this did not quite come to fruition. Filled with rape scenes and human fetus trafficking, U.S. distributors understandably thought the movie was too extreme and controversial for a widespread release, even with the cast. It took a long while after its completion to finally get a direct-to-DVD release through a small label, with the title changed to the very ambiguous Dance with the Devil.

Overseas in Spain, where Alex de la Iglesia had been making brilliant films for years, audiences also scorned the film, seeing it as Alex rejecting his Spanish horror roots and going Hollywood mainstream. Yet it is incredibly well-directed and feels exactly like an Alex de la Iglesia film, an oddball, uncomfortable mix of insane violence and controversial acts alongside stabbing black comedy. Perdita Durango had a very quiet original release, and aside from being celebrated by bizarre cinema lovers like myself, disappeared into cult obscurity.

Huzzah for Severin Films! Coming this March, over 20 years after the initial DVD dump, Perdita Durango is finally getting the fancy treatment this brutal, badass lady deserves. Severin is releasing a 4K scan of Perdita Durango on Blu-ray alongside a wonderful assortment of bonus features. Usually, this is the point in articles where I would recommend all the readers check out the forgotten or over-looked title. I’m not going to give a bulk recommendation for this one. Again, there are human fetuses, excessive rape, disembodied-head sex scenes, human sacrifices, and James Gandolfini gets repeatedly hit by vehicles and keeps on ticking. But for those who enjoy psychotic drug-addled trips into campy, comedic, erotic, horrific madness … you have a date with Perdita. For more info, visit https://severin-films.com/

Rebekah McKendry was FANGORIA’s Director of Marketing for over a decade and went on to serve as Editor in Chief at Blumhouse Productions for several years. She is currently a professor specializing in horror media at the University of Southern California, as well as an award-winning filmmaker. She is a co-host of Blumhouse’s award-winning Shock Waves podcast and host of FANGORIA’s Nightmare University podcast.She has a doctorate focused in Media Studies/ the Horror Genre from Virginia Commonwealth University, an M.A. in Film Studies from City University of New York, and a second M.A. from Virginia Tech in Arts Education. Additionally, she is the founder of the Stephanie Rothman Fellowship for Female Film Students.