The 'Misery' of Annie Wilkes and Hurt People Hurting People 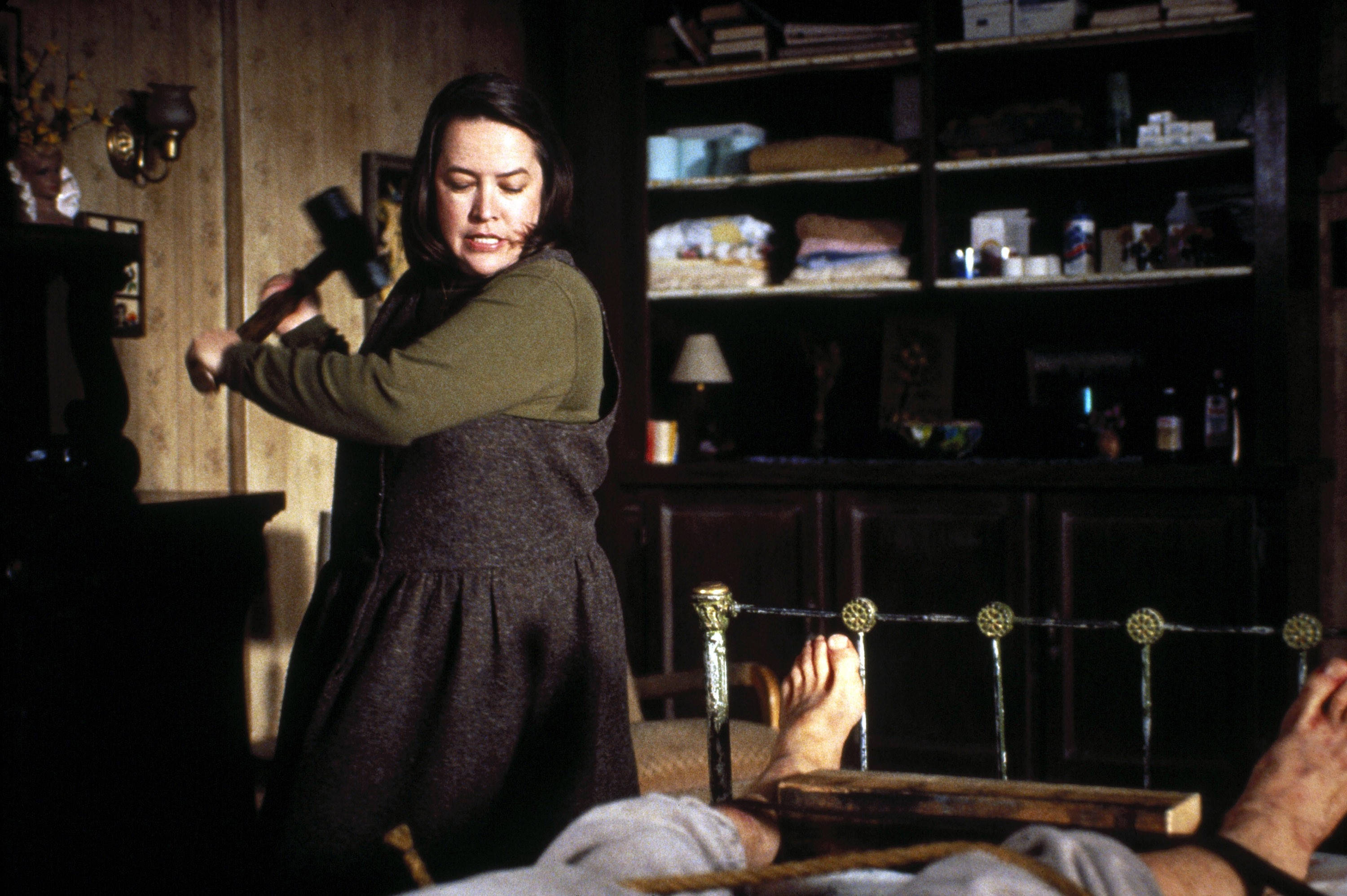 She will, she will rock you. (Columbia Pictures/MovieStillsDB)

The 'Misery' of Annie Wilkes and Hurt People Hurting People

“Now the time has come. I put two bullets in my gun. One for me, and one for you. Oh, darling, it will be so beautiful.” — Annie Wilkes, Misery

urt people hurt people is a saying I think most can relate too. I’ve hurt people as a result of my hurt, just as others have hurt me because of their hurt. I’m not saying either was right or justifying it, but it’s a part of the human condition. It’s a part, however, that can be significantly lessened (on both sides of the hurt). Stephen King’s fictional character, Annie Wilkes — portrayed by Kathy Bates in the film adaptation of his book, Misery — could be the poster woman for “hurt people hurt people.” She is bipolar, sadomasochistic and exemplifies schizoid and schizotypal behaviors (among others).

I’m going to digress from Annie for a moment however, taking a leap of faith in believing that as horror nerds, most of us still like films outside of that specific genre. Personally, I’m a sucker for indie flicks. One of my all-time favorites is I Heart Huckabees. For those who aren’t familiar, it’s considered an “existential comedy” and Dustin Hoffman, Lily Tomlin, Jason Schwartzman, Mark Wahlberg and Jude Law.

We’re here for horror, so I’m not going to bore you with the plot of the movie — though, if you’re into abstract, thought-provoking films, I can’t recommend it enough — but did want to briefly share the dialogue from the final scene of the film between Jason Schwartzman’s character (Tommy Corn) and Mark Wahlberg’s character (Albert Markovski) as I believe it provides context for the rest of this article.

‍Tommy Corn: “What are you doing tomorrow?”

Albert Markovski: “I was thinking about chaining myself to a bulldozer. Do you want to come?”

Tommy Corn: “Sounds good. Should I bring my own chains?”

Albert’s response is something that while being metaphoric, strikes very close to home for me and possibly some of you too. “Should I bring my own chains? We Always do.” How true is that? We’re shackled to so many things in our lives that weigh us down. For example: repeatedly becoming involved with toxic people or relationships; spending countless hours online watching YouTube videos; eating unhealthy foods to excess; spending money beyond our means for things we don’t need. And on and on it goes.

In more extreme cases, some of us self-harm, develop eating disorders, become addicts/alcoholics or have attempted suicide (personally checking all of the above boxes). So, Annie. She has enough chains (metaphorically speaking) to keep even Jason Voorhees bound beneath the waters of Camp Crystal Lake. All right, fine, no one has that many chains because Jason is a bad-ass motherfucker that can never be kept down, but if anyone was close to the task, I believe it would be Annie.

In the very strange event that you haven’t read or seen Misery, here’s a quick recap of how maniacal she was. When Paul Sheldon (James Cann in the film version) ventures out of his room during times when Annie leaves the home, he comes across her old scrapbooks (in accordance with both King’s original book, and the novel), he realizes that she is a full-on serial killer. She killed her father, a neighborhood family, her old college roommate and a hitchhiker with whom she had briefly been intimate. As if that wasn’t enough, Paul finds out that 11 children were murdered under her watch as head maternity nurse at the local hospital.

Cutting some corners here, we eventually arrive at “The Hobbling” scene. Annie has Paul tied up in a bed and takes a sledgehammer to his ankles (sort of like how I take a piece of chocolate to the mouth, which is to say, fast, frenzied, and in my case at least, sometimes painful). So yeah, it’s fucking brutal.

And herein lies why I adore the horror genre. I know that Stephen King’s vision for this movie was completely different from the way I subjectively experience it, but still, it’s my (and your) right to do so. That’s what the horror genre is all about. Taking, and putting into it, whatever we want. So for me, Misery, Annie and Paul, exemplify aspects of our tumultuous human experience.

To break it down: Paul has an accident while driving and is taken in by Annie, a woman who says she’s his number one fan and will take excellent care of him (obviously, a lie). Who among us has been lied to, especially if, and/or, when a mental health issue was involved? My hand is already up. It’s awful when you embark on a healing journey, whether forced or self-imposed, only to find out that what you signed up for isn’t actually what you signed up for.

Paul wasn’t looking for personal development or self-improvement, but in a sense, he was forced into that situation. He had an accident. Said accident need not be as severe as Paul crashing his car, but have you ever had to rely on someone else after any kind of unforeseen incident/accident (no matter how seemingly small) for assistance? Let’s use a gnarly cold or flu as a universal example. One that left you bedridden, only for mom, dad, your husband, wife or whomever to care for you? That’s a vulnerable position to be in. Sure, it’s not forced, so to speak, like Paul and Annie’s situation, but still, letting our guard down and allowing another to care for us isn’t always easy.

As Misery continues, aside from Paul bulking up on his rigid typewriter regiment (the equivalent of bench-presses), we watch him, and his surroundings, change through a small window. Winter. Spring. Summer. Fall. Repeat. A literal hostage forced to see life for what it is — beautiful, tragic, glorious, triumphant and ugly.

Upside-down crosses aside (speaking for myself only, of course), I did an interview with a lovely 80-something-year-old Trappist monk several years ago before he passed away. During our conversation, I mentioned to him that I was in recovery (referencing my drug, alcohol and self-harming issues, among other issues). His response forever shifted the way in which I approach everything I do (from writing to speaking to my own personal life). Father Keating replied, “I’m in recovery too, but from the human condition and the addictive process that we all seem to suffer from in varying degrees of severity.”

Regardless of your religious and/or spiritual beliefs (or lack thereof), tell me that’s not some real-ass shit?! As humans, we are all in some form of recovery from something. There’s no way around it. Whether it’s previous traumas (no matter how big or small they may seem) or life events that are currently in our face right now. That’s life. It can fucking suck so bad, and yet, at the same time, it can be really amazing. I promise. In the words of the seminal Canadian Hardcore band Grade, “This is the time in my life where everything is falling apart, and at the same time, it’s all coming together.”

So yup, addictive processes, we all have them. All of us. You are not alone. This. Is. Life. And that’s okay. Occasionally, I still look at my tattooed wrists and see them as a perfect canvas to do my own self-harming “artwork” on, but I know that’s the easy way out and not the answer, at least for me it’s not — at least not today. Yet Annie saw Paul’s ankles as solutions in a way. They were her canvas to feel home, to feel safe, to feel … not alone. The thing is, whether inflicted by self or another, the harm and pain only last so long and then what? Paul was forced to finish a novel (well, one of two). Me, I was forced to spend time in psychiatric hospitals (among other institutes) under observations which sucked, immensely.

I, like Paul, made it out relatively unscathed, but we both made it. And just like Paul, my version of “Annie,” which he continued to see after the incident in which she died, manifests itself a lot of the time. At the end of the film version of Misery, Annie is seen walking a cart of food to the table, at which Paul smiles, knowing it’s not actually her. I don’t mean to get overly esoteric here, but that aligns with two of the teachings that come from Eastern Wisdom Traditions.

If we look at thoughts, triggering sights and other relatable experiences, we can, if we choose, process them one of two ways. The thought or vision can be seen as if it’s a cloud in the sky passing by temporarily (and since this is FANGORIA, it’s hopefully a blood-soaked sky, raining blood and body parts). However, the point is that it’s all temporary, and will find its resting place eventually. This is life, and just like any good, or even bad, horror movie, there’s going to be a sequel, even if it’s like Halloween 3 (which in my opinion rules) but has nothing to do with the original.

In my humble opinion, Paul’s character nailed it because he sees the remembrance of his painful and traumatic experience (via his visions of Annie) and simply smiles at it knowing it’s nothing more than a memory. Be like Paul. Fuck Annie.

(*NOTE TO READER: This article is not meant as treatment. Trauma and mental health issues need professional help to be worked through. I’ve been doing so myself for 20+ years. This article, while meant to be helpful, is really nothing more than a playful way of working with life issues; it’s still intended to help in your healing process in whatever way that it may.)