Interview: ‘Taking Shape’ Co-Author Dustin McNeill And the Many Roads Back to Haddonfield 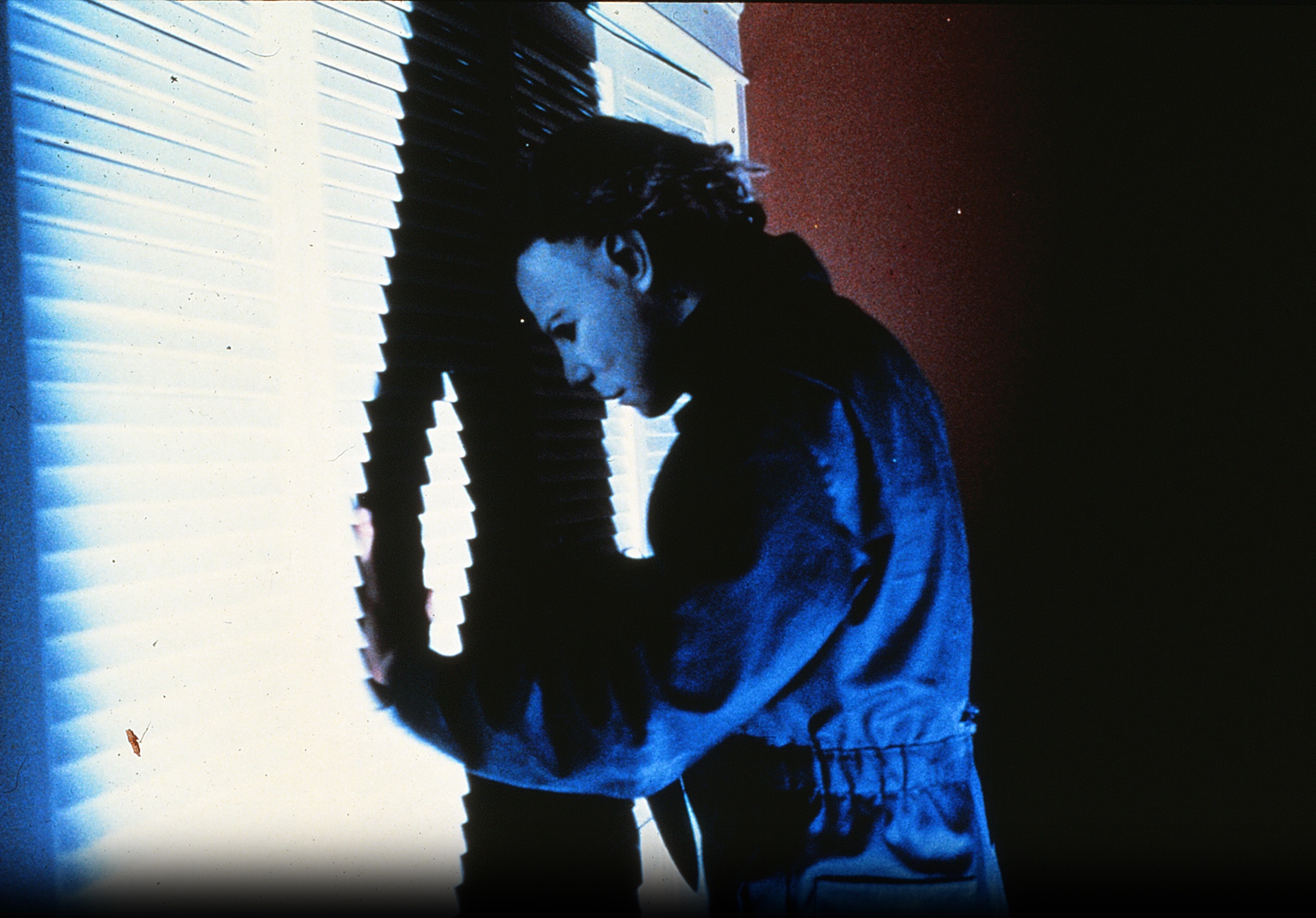 Somehow, I don't think Michael reflects half as much as fans of his killing sprees: "Halloween." (Photo from MovieStillsDB)

Interview: ‘Taking Shape’ Co-Author Dustin McNeill And the Many Roads Back to Haddonfield

hen it comes to horror franchises, there seems to be no more rabid fanbase than that of the Halloween fan. There were sects of us that would congregate at the hotel bar of East Coast horror conventions and recount the stories of when we first discovered Halloween. Back in 2003, it was truly eye-opening to attend the 25th anniversary convention in Pasadena, Calif., to see just how huge the fanbase really was. (We’re now just passing the 40th anniversary of the film and still going strong!) I recall in the latter days of Myspace when Rob Zombie would use his blog as a place to announce new cast additions for his reinterpretation of John Carpenter’s classic and how those posts would immediately garner hundreds of comments. When it comes to a Halloween fan, we want every morsel of information or random fact that’s out there.

It’s a good thing author Dustin McNeill feels the same way. His meticulous research has netted us several essential genre-related tomes, including Phantasm Exhumed, Slash of the Titans: The Road to Freddy vs. Jason,, and even Adventures in Amity: Tales from the Jaws Ride. Now, along with co-author Travis Mullins, he’s delivered his best, most exhaustive book yet, Taking Shape: Developing Halloween from Script to Scream. The book goes chronologically, film to film, and examines the entire development process of each sequel, culling from interviews new and old, FANGORIA articles, and recounts the details of some radical scripts that never saw the light of day. It’s mandatory reading for Halloween fans hoping to learn some new tidbits about the sequels they love -- and, more importantly, the directions and movies we almost got.

And let’s face it, these days, ya gotta have a sequel! While this book covers all the Halloween films that were made, a follow-up book—Taking Shape II-- is due early next year, and will specifically cover all the scripts that were never made! I spoke with McNeill about tackling Taking Shape, the exhaustive process of writing a book like this, and what we can expect from the upcoming second book.‍

Dustin - you've done such exhaustive research when it comes to the Phantasm franchise, which is what I primarily associate you with. And then both Friday the 13th and Nightmare on Elm Street with your Freddy vs. Jason book Slash Of The Titans. So, why Halloween? And why now? What's your attachment to this particular series that made it be the subject of Taking Shape?‍

Why Halloween? It’s just about the most top-shelf modern horror franchise I can think of. I’ve loved these films since I was a kid. And certainly, it deserves a comprehensive book. Franchises like Halloween deserve multiple books, in my opinion. It took me awhile to build up the confidence to write about it, honestly. Taking on a franchise this massive and important with such passionate fans - that can be a little intimidating.‍

One of the things I love about your style is that you go chronologically and talk about all the various scripts that led to the final version. How did you find all these scripts? And how long is just the research portion of crafting a chapter in your book?‍

I personally love tracking the evolution of ideas throughout the filmmaking process. I find that all endlessly intriguing. I tend to research and write at the same time, which means my writing is often changing as I discover new information and materials. There are numerous Halloween screenplays available online, but we relied heavily on the generosity of certain collectors and also the filmmakers themselves. I think they respected what we were trying to do with Taking Shape and wanted to support that effort.‍

Working with Travis on this was fantastic. I had never planned on having a co-writer, but I reached out to him hoping to license an interview he’d done with someone. I immediately recognized that he was knowledgeable and a strong writer. Our partnership evolved quickly from there. He brought so much to the table on Taking Shape, particularly with regard to research. Travis even managed to locate a copy of Nigel Kneale’s original script for Halloween III, which was an incredible resource in writing that chapter. Not even Tommy Lee Wallace had a copy of that one. Travis is also quite direct and not afraid to challenge me on what does or doesn’t go into the text, which I really respect. He pretty much forced me to be nice to Tina in the Halloween 5 chapter.‍

One of the fun punchlines to each section of your book is how they each end with various pull quotes from reviews of the time. (From Variety to Hollywood Reporter and Siskel and Ebert.) I was surprised by the vastly negative reviews to the original Halloween! What were the big surprises for you when seeing how each film was received critically?‍

Aren’t those interesting? Travis thought of including those. They’re such a cool window into the time period in which those films were released. And yes, it’s hilarious to see how the original Halloween was received back in 1978. It’s also kind of fun to read some of the more negative reviews and go, “Man, this critic just doesn’t get it. Do you even like this genre? Why are you reviewing this?”‍

There are so many fascinating interviews throughout the book: everyone from Kevin Williamson to Dean Cundey to Brandon Trost. Who would you say was the most surprising interview, in terms of learning more information on a particular Halloween film than you had before?‍

It’s difficult to pick, but I really enjoyed Travis’ interview with Halloween 5 writer/director Dominique Othenin-Girard. That interview spans 18 pages in the book, and we don’t hold anything back. He addresses so many topics, often hilariously, and I just love his answers. He’s eccentric and so confident of the bold choices he took on that one.‍

As a fan, I find the troubled productions of Halloween 5 and 6 fascinating. I even did a bootleg commentary with screenwriter Dan Farrands for Halloween 6 on Icons of Fright several years back. Because of that, were those segments the hardest to write about for the book? Or just more time-consuming considering how well documented they are?‍

I remember that commentary, and it was great! Halloween 6 could’ve been its own book, couldn’t it? We studied the hell out of that film and its different scripts and versions. That was a difficult chapter simply because there was so much to keep track of with the script meddling. At first glance, nothing really makes sense about either official cut. But when you delve deeper into it, it all makes even less sense! And yet there is still something so endearing about Halloween 6 that makes it enjoyable to watch. I have so much respect for Daniel Farrands for still championing that sequel after all that happened. I don’t know that I would’ve handled it as gracefully as he has.‍

On a personal note, which is the first Halloween film you discovered? First one you saw in theaters? And your personal favorite (not including the original)?‍

I first saw Halloween and Halloween II on USA Network when I was 10 years old. It was early afternoon, totally bright outside, and yet I was terrified watching these. I recorded them off television but didn’t dare watch them at nighttime. My first theatrical experience was Halloween H20 back in 1998. The excitement and hype for H20 was unbelievable, especially online. The official website released a new clip each day beginning 12 days before the release. I downloaded each QuickTime file via my 56k dial-up connection, which took over an hour. I’ll get a lot of flak for this, but I think my nostalgia for H20 makes it my favorite sequel. It was pretty powerful watching Jamie Lee grab that axe and go after her brother. I love it!‍

This might be covered in your upcoming second volume, Taking Shape II, about the unmade Halloween movies, but I need a tease! Just how much of a reality was the proposed Halloween/Hellraiser film that Clive Barker was supposed to write for John Carpenter to direct? I can't take that prospect seriously, so I'm curious if it ever got beyond the idea stage! ‍

We definitely have a chapter dedicated to the Halloween/Hellraiser crossover and yes, it came closer to happening than most people realize. When you’re discussing Michael vs Pinhead, you have to acknowledge its development both before and after Freddy vs Jason because that match-up changed the game. Suddenly everyone in town wanted to replicate its success with whatever characters they could line up. So yes, we’ll be touching on that in Taking Shape II.‍

Speaking of Taking Shape II, I know you don't want to give away too much, but in this book, you touch upon several fascinating directions the franchise could've gone to, including the direct-to-video route following Halloween 6! What do you think are going to be the most surprising and interesting unmade movies that fans will get to read about, in detail, in your follow up book?‍

I think the most interesting unmade Halloween sequels are the ones fans don’t know about yet. We’re going to be shining light on screenplays that were officially developed but never, ever announced publicly. We’ve got a huge chapter on Halloween 6 when it was going to be produced by Quentin Tarantino. There’s also a great chapter on the original Halloween 5 script in which little Jamie Lloyd truly was evil. I’d better stop talking these up or my co-writer is going to kill me.‍

The fanbase for the Halloween franchise is like no other when it comes to the genre. Why do you think we continue to be fascinated by this particular franchise that arguably began with a masterpiece, and has since been followed up with radical ideas that never quite capture what that first film did? Why are we so obsessed with the Halloween movies?‍

You’re right about that. Halloween fans are like no other fan base within the genre. I think we continue to be fascinated by Halloween because it’s such an incredibly potent concept. We want nothing more than to spend additional time in Haddonfield with these characters, being scared. Will the sequels and remakes and comics ever live up to the first film? No, of course not. But it’s still tremendous fun getting to revisit that territory every few years.