And in defense of the theatrical ending. 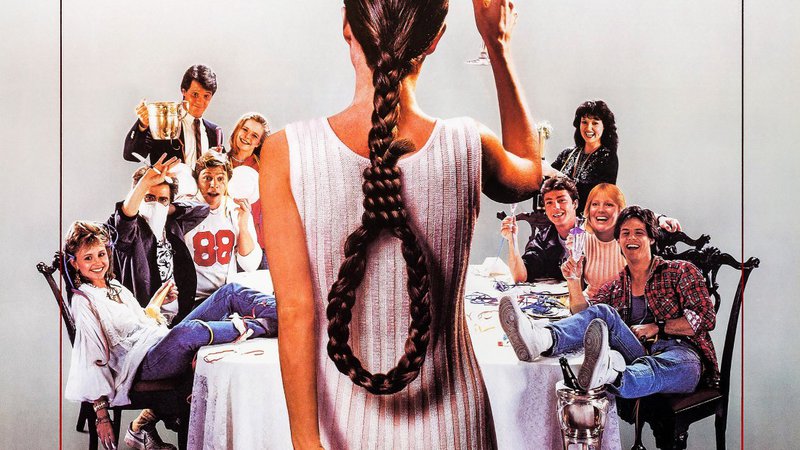 Like many slasher fans, I was disappointed (to say the least) when I watched April Fool's Day for the first time and got to the "Haha, it was all a prank! No one really died!" ending. No one watches a slasher movie for its complicated narrative or multi-dimensional characters, so to rob us of its most standard elements – not to mention the cathartic moment of our hero triumphing over their pursuer – made it feel like a giant waste of time to my very adolescent eyes. As a youth that was allowed to watch Friday the 13th and Nightmare on Elm Street films, I felt a bit robbed that my coveted weekend rental was a big trick and I'd have to wait another week to see a REAL one.

Once I was older and theoretically wiser, I gave the film another shot and was only mildly surprised to discover that I liked it quite a bit more this time around. Knowing that it's all a ruse softens the blow, of course, but with another thousand slasher movies seen in between my viewing as a 7 or 8 year old and my viewing as someone approaching 30, it was easy to see the film for what it really was: a welcome respite from the more traditional body count flicks of its day. Because they couldn't spend too much time on chase and kill scenes for obvious reasons, director Fred Walton and screenwriter Danilo Bach instead allowed their characters (and the game cast) to goof off with one another and make their characters feel more real and alive than many of their '80s slasher counterparts.

Plus, not for nothing, but Walton and Bach weren't exactly trying to hide the trick from the audience, as they certainly never cheated. No one is "killed" on screen – we see them get spooked or maybe even grabbed from behind, and since Muffy (Deborah Foreman) didn't tell any of her friends about her scheme, the film avoids the pitfall of a character acting along with the ruse even when they're alone (the recent Fantasy Island is guilty of this, with the surprise villain character acting skittish when no one else was around). They even go out of their way to draw our attention to their "movie-ness," as the film opens with home video footage presented in academy ratio before a mannequin (a "pretend" human) is dragged along the ground, its head pushing the edge of the frame out until it fills a 2.35:1 image. Within 30 seconds of the film's beginning, they are overtly telling us to not take things too seriously and just have a good time, in a film named after a day where nothing is to be believed.

Naturally, a young kid wouldn't pick up on or care much about that, or about the extra time spent on rounding out the characters, but as an adult I find it refreshing. I've only seen the movie three times in my life, but I can tell you all of the characters' names and offer at least a line or two about who they are and what they do, which is more than I can say about several of the F13 sequels that I've watched over and over; hell, I watched Jason X just last week for the 7th or 8th time and I still can't remember the name of the guy who lives. Sure, they're a bunch of rich kids, but they're not hateable, and more importantly they seem to genuinely like each other's company, unlike far too many of these things where I spend most of my viewing wondering how it is these people ever managed to be cordial enough to each other to make plans to go to their isolated summer house or camping trip in the first place.

Which, in a weird way, makes the movie's conclusion ultimately more preferable to a traditional one. One of the biggest challenges of making a slasher movie is finding the right balance for the characters, where the audience needs to like them enough so that they're not rooting for the killer, but not so much that fans are downright angry when this or that person is knifed and they turn on the movie as a result (see: Randy Meeks, Scream 2). I wouldn't say these April Fool's characters are my favorite group ever, but knowing that they're all alive and will continue having a good time for many years to come is sort of soothing in a way. Maybe it's because I'm a parent now, but I've noticed I get kind of distressed if I think about the poor sheriff who will have to call 6-8 sets of parents every time a masked maniac has his way with a group of college kids that went away for a weekend. Basically, it's nice to go through the usual motions but avoid thinking of the grim aftermath.

And that is why I think the studio ultimately made the right call to delete the film's final reel or so. The footage has unfortunately not been located despite efforts from Scream Factory to include it on their new special edition (not that it's much of a surprise; we horror fans know all too well that Paramount doesn't have a great track record for this sort of thing), but Jeff Rovin's novelization for the film has it included, as he more than likely had his manuscript finished before the producers made the decision to axe it. For the first 4/5th of Rovin’s book, the story plays out more or less identically to how it did on screen, but then you get to pages 170-175, which depict the final party scene that serves as the film's conclusion, and the story keeps going in a way that would probably surprise/confuse anyone who wasn't aware of the late change.

So what originally happened? Well, after Muffy explains her scheme to everyone and they have their "We're not actually dead!" celebration (the point where the film ends), the friends all spend another night and then pack up to leave in the morning. While heading out, Skip (Griffin O'Neal's character) suggests that they get Muffy back by playing a prank on her for a change, and most of the others agree. The plan is hatched, they return undercover while Muffy is cleaning up, but then she is attacked for real by a mysterious stranger before they can really start pulling off their ruse. There's some minor "Is she playing games with us again?" stuff, but ultimately they realize that someone does indeed mean to do her (and the others?) harm. It's eventually revealed to be Skip, who came up with the "let's trick her" plan as his cover for what would be a legit murder, seeking revenge on her for getting the family's home/inheritance while he was largely cut out. While on the attack, Skip is killed by Rob in self-defense, and Muffy, distraught that her brother tried to kill her, basically loses her mind in the process, with the book ending as she sings to his corpse.

Well, that's not fun at all! It's a huge downer, for starters – the main appeal of the movie is that these characters are, while imperfect and WASP-y, generally likable and carefree, so to have it end with one of them legit trying to murder them and another losing her mind would be like ending E.T. on the aliens' ship crashing down into the forest and immolating Elliott for good measure. Also, it feels like a massive tonal shift even in the book where Rovin was able to avoid the tell-tale signs that it was all staged; he writes in things like "and then they felt someone's hands on their neck, squeezing the air out..." before cutting to the next scene, which in written form is acceptable but in a slasher movie an astute viewer would probably start to notice the lack of "money shots" and abundance of off-screen deaths. In other words, even in the book where things are played more straight (he also downplays the more harmless pranks) it feels like a departure, and it would be even more jarring in the feature version. Furthermore, the movie would be two hours long with this extra sequence, and no studio would want that, so to include it would probably mean cutting out some of the character stuff in the first 90 minutes, which is the precise element that makes the movie worthwhile.

So yes, while it would be interesting to see, and was probably disappointing to O'Neal since it basically cut his screentime in half (as he was the first to "die"), ultimately the movie was better off without it. It wouldn't have made up for the lack of a legit body count (in fact they'd still all survive, as the only casualty was the "killer") for those who were angry about it, and it would rob the movie of its happy-go-lucky nature. Indeed, the film's abysmal (largely in name only) 2008 remake is the exact kind of movie I referred to earlier, where the characters all seemed to hate each other and no one is having any fun, least of all the viewers. We can throw a rock and hit one of those, or even a good slasher that delivers all of the adolescent death we demand (there's a pretty good one with Amy Steel, in fact), but there aren't a lot like April Fool's Day, where you don't have to feel even the slightest bit guilty about having a good time.