The end of the tail: 'Mermaid Down,' out Oct. 29, was 'experience of a lifetime' 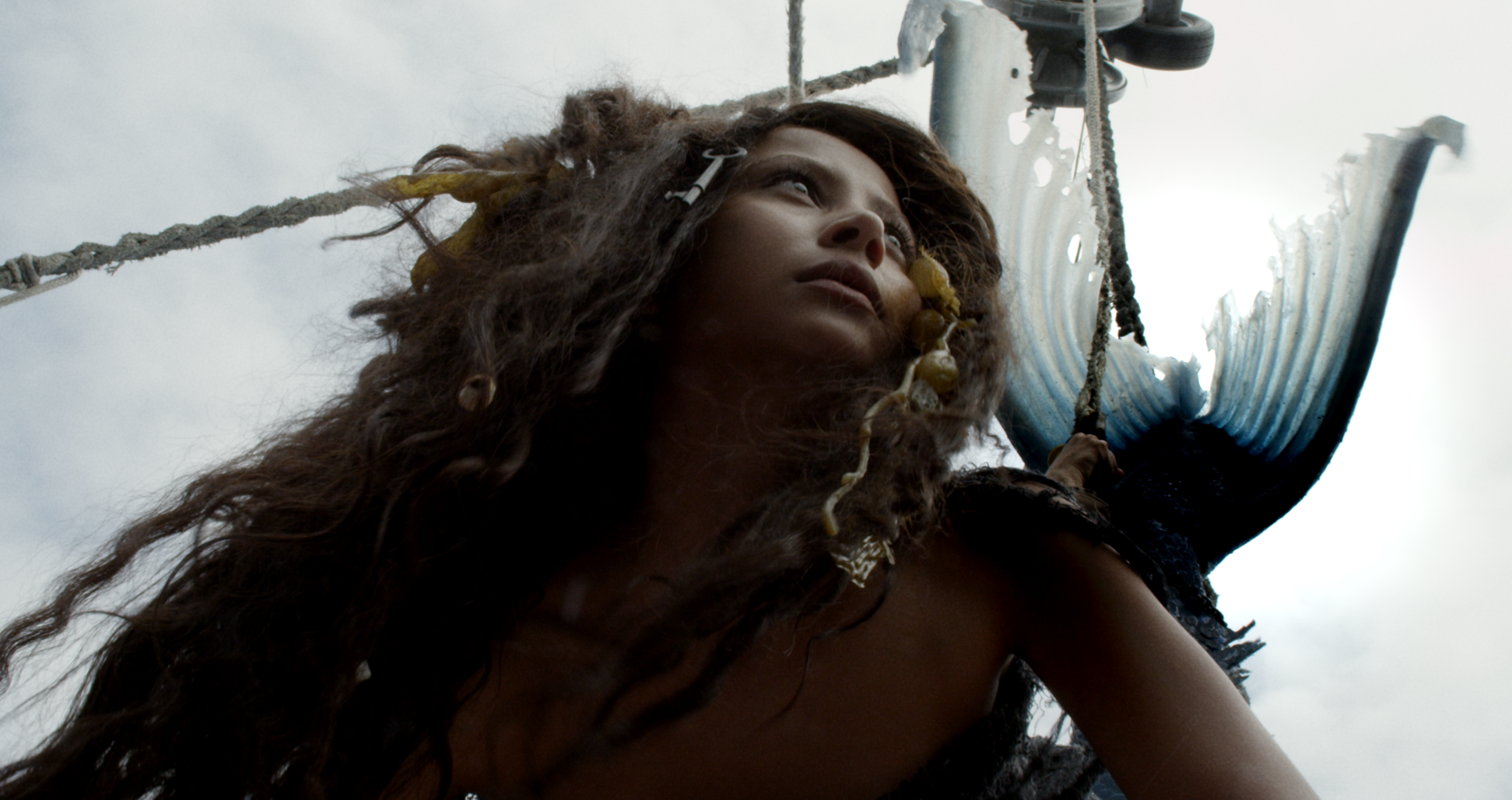 Net worth. (Photo courtesy of Mermaid Down LLC)

The end of the tail: 'Mermaid Down,' out Oct. 29, was 'experience of a lifetime'

Writer-director Jeffrey Grellman’s new film, Mermaid Down, will release Oct. 29 on Redbox. This is the second of three pieces for FANGORIA.com, in which he walks readers through the journey to get his film made. (Read Part I here and read Part II here.)

ilming Mermaid Down was the experience of a lifetime with challenges so insurmountable that it nearly didn't get done. But we used every trick in the book and invented a million more. I even went so far as to film actors walking on their knees to create the illusion of walls appearing 12 feet high because I could only afford to build walls half that height. But we did it. Mermaid Down was finally in the can. The film looked great, and I didn't spend a dollar more than our budget of $85,000. With utter exhaustion romanticized into an unstoppable will to make this shoestring film as professional as humanly possible, I began post-production with empty pockets, no investors, and the impossible ambition of a fool.

I edited the film into a 2-hour, 15-minute movie with temporary music from movie soundtracks as place-holders, and I filled in as much of the sound effects as I could with over six months of field recordings I’d made at harbors, old warehouses, and forest hikes. I stole pallets from the back of grocery stores and recorded my boots walking on them to create the sound of the fishermen walking on the boat, and I dragged a metal strainer across my apartment's kitchen tile to create the sound of the mermaid's gauntlet sliding across the boat when she first drops to the ground after being cut from her own tail. Eventually, I had a rough cut I felt was strong enough to show to industry professionals and ask them to come in and color correct, provide additional sound work, score, and mix into a master.

I screened Mermaid Down for about 30 different high-status people in the post-production world, even though nearly all of them told me up front that they couldn't come on board a project with no money. Then after watching the rough cut, almost all of them said they had to be a part of it. I was stunned and utterly grateful.

It took three months to gather my crew, but at the end I had a post-production team I would want to work with on a hundred-million-dollar movie. The composers, in particular, came as a powerful relief because this film, due to its wild-ride-like style, demanded a big, bold, classical movie score. It was my biggest fear that I wouldn’t find the right artists to create the kind of music I knew the film required. But composers Shepherd Stevenson and Christopher Lord brought passion, talent, and dedication to the project, surpassing my initial vision with their brilliant score. They elevated my shots, my story, and my effects to a place that deserved distribution. But distribution was still the elusive white whale.

I knew that I needed to get attached to a sales agency because those were the middle-men who had established relationships with distributors, and I couldn't build those relationships on my own. I cut a trailer and reviewed it with my girlfriend (Kelly Lauren Baker). She had become my closest confidante throughout all of this and had been with me every step of the way, acting as a producer. We fought like cats and dogs about the trailer - arguing about how to best express the uniqueness and power of the film in under three minutes because we knew that this trailer was our only shot at getting a sales agent. I cut at least five trailers until we FINALLY HAD IT. We scoured the internet for contact information for reputable sales agents and linked the trailer in an email but withheld the budget in the hopes that we’d have a shot at making people believe it was a movie with a real one. That email also boasted my script awards and the film's underlying narrative: the universal experience of pain and loneliness in people who feel different from the crowd and how they come together to stand up against those who try to hold them down - no matter how crazy their efforts may look to others. And this narrative was essentially the story of how I’ve felt most of my life ... and turned out that it also happened to be the story of making this movie.

Everyone I knew was telling me I'd be lucky if even one agent responded to the emails.

We sent it to 28 sales agents. Every single one wanted to watch the screener and then nearly ALL of them wanted to rep the film. It was a miracle. I couldn't believe it. We took meetings with several of the highest-rated companies and did some research. Archstone (Machete, Rum Diary, The Human Centipede) became our sales agency because of their relationship with Sony and their CEO’s sincere love for the film. When word reached someone at HBO that we were getting picked up by Archstone and Sony, we were referred to an attorney. It was a lawyer we couldn't afford but with whom an unspoken agreement was made that I would retain his services should I go on to become a name director.

The sales agency came to us with one major problem: All the distributors said the film was too long. Apparently, a horror film with no stars won't sell internationally if it has a running time longer than 95 minutes. I was heartbroken. In my naivete, I thought the film would just be released at 2 hours, 15 minutes because everyone seemed to love it. Painfully, the distributors wanted me to cut out the quiet scenes and the character work that had made my story an award-winner ... but the logic was simple. I could keep my running time and the film wouldn’t see the light of day ... or I could cut 40 minutes out of my movie.

If the actors were to ever be discovered through the release of the film, if all the creativity put to screen was to ever be seen and appreciated by some 12- year-old kid eating popcorn on his couch, if I were to move onward and upward to another film ... it would have to be cut. And every cut felt like torture. With the sales agency’s suggestions, Kelly and I worked tirelessly to get the film down to time and retain a narrative in the process.

After that was done, we had to deal with deliverables, the files and legal paperwork required by the distributor and one of the most overwhelming tasks placed upon filmmakers today. Because movies have been democratized with DSLRs, there's no incentive for distributors to take care of all that stuff so it's left to the filmmaker to figure it all out - and pay for it, which we did out of our own pockets. The silver lining being that once you've been through it, you can reverse engineer your next film and not be caught off-guard by all this stuff at the end of production.

After all the files had been approved by quality control for broadcast, all masterf iles for both domestic and international release were turned in (with textless versions of the film to be replaced with foreign language versions), and all legal documents had been completed, I learned Sony had sold their division to Alliance Entertainment (The Criterion Collection); that meant even wider distribution for Mermaid Down. I also learned Mermaid Down had been sold internationally at Cannes and would be released all over the world in October 2019.

Now that it looked like there would be some success after all that grueling work, which had left my girlfriend and me exhausted and broke, it finally seemed like we could step away from the intense project for one day.

I asked Kelly to marry me.

We ran off and married each other in private at the courthouse, with no one else in attendance but the ghosts of who we had been before we met eight years prior and who we were before setting off on the journey of Mermaid Down.

And the journey keeps unfolding: 30 days ago, I discovered every VOD (video on demand) platform has picked up the film for release, Walmart loved the film and ordered 12,000 units (DVDs) for a physical release in January 2020, and Redbox, one of the most coveted release platforms in the film industry, selected Mermaid Down for their Halloween release. We hosted a premiere for the film at one of the best theaters in LA, and my wife and I walked the red carpet in a surreal daze because not only were there 8-foot-tall posters behind us announcing MERMAID DOWN to the world ... but because we were about to announce to a theater packed with our closest friends and family, and our talented cast and crew, that we were also bringing something else into the world, as well: our son.

Now, with my next three scripts written and ready to go, I’m setting off to do it all over again …  and I couldn’t be happier.

Jeffrey Grellman was raised in Belgium for the first seven years of his life before moving to California where he began winning awards for his creative writing at an early age. He studied special effects, film books and classical music throughout his entire youth, even breaking into every film school he could in order to sit in on classes. He worked professionally for a short time as a voice artist for radio ads and video games as he continued to pursue writing and directing films. His award-winning screenplay for Mermaid Down was featured in Filmmaker Magazine. The film became his first feature. Mermaid Down will be available in Redbox starting Oct. 29th, will continue rolling out to VOD, then on DVD/Blu-ray at Walmart in January 2020 and will continue onto TV throughout the year. despite a budget of only $85K.‍