Filmmaker Greg Shultz Has Always Had A Dream of Making Nightmares 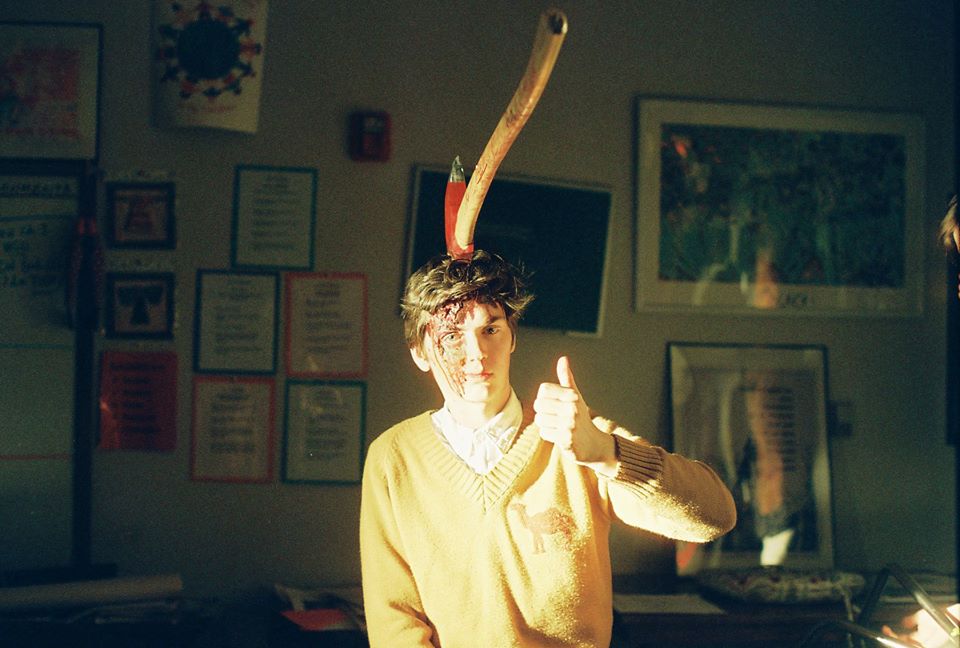 Gregory Shultz is living proof that self-applied effects can be a headache. (Photo by Max Rosen)

Filmmaker Greg Shultz Has Always Had A Dream of Making Nightmares

In this first of a series of articles, filmmaker Gregory Shultz writes about his experience making Night Crawl, a genre short which will play at New York Horror on Dec. 7.

eing from the Ozarks, I had trouble imagining a career in film. I made videos with my friends and watched every genre film on the shelf, but to me Hollywood was too far away from where I was.  That’s why the home-grown horror of Peter Jackson and Sam Raimi was always my favorite. They just did it in their backyards.

I didn’t go to film school, but I did do six years at a Blockbuster. That’s got to count for something. Film school didn’t seem to offer what really fascinated me about motion pictures, which were the special effects and sets. That’s where the real magic was. In high school and through college, I built props and did special effects with my friends. We made a short called Ghoul School and had a blast. I knew I had to work with horror films in some capacity. After getting my masters in business, I got a job at Shout! Factory and drove to Los Angeles with a packed Civic.

I had a good year at Shout! Factory. I met John Carpenter and talked to L.Q. Jones about Sam Peckinpah. Everyone at the office was great. It was this genre fan’s dream. Unfortunately, I’m not an office type and decided distributing horror movies wasn’t where I wanted to be. I wanted to make them. I left Shout! Factory and started cold-calling production designers. I had some construction skills so I found work rather quickly with a designer named Billy Jett. Billy is a masterful designer of horror and crime shows. He designed Dario Argento's Trauma and many films for Charlie Band. I hold many of the Empire and Full Moon pictures in high regard, so I was excited when my first job with Billy was Evil Bong 420.  It was a long shot from the glory days of Full Moon, but Billy really showed me what you could do with a low budget, like how to use foreground to hide what you don’t have. What I saw him pull together on Full Moon’s Ravenwolf Towers is very impressive if you know what he was working with. The man designed Unsolved Mysteries for a decade! He knows every trick.

‍
After doing some jobs assisting Billy and learning the craft, I started art directing some music videos. I’ve created so much trash, literal and figurative trash. The amount of sets I’ve thrown away is staggering. After a few years of working too hard in various positions in an art department, I found my niche working as a leadman on commercials and films. Leadman is probably one of those titles you see in credits, but have no clue what they do. I lead a crew of set dressers, and we dress sets together under the command of a set decorator. I’ve met some of the best people in the art department. Plenty of weirdos.

Eventually, I was offered to lead an anthology horror film called Nightmare Cinema. Joe Dante directed a segment and to me nobody can make horror as fun as he can. Gremlins and The ‘Burbs are very important films to me. To be able to build a set for Joe Dante, I felt for the first time that my dream had kind of come true. I had proved my pessimistic younger self wrong. Shortly after that, I joined the union as a leadman. Local 44 represent.

After another few years of grinding in the art department, I began to feel that time was running out for me to direct my own stuff. I keep the thought that Sam Raimi made Evil Dead at 21 in the back of my head at all times. I needed to start making something of my own now or never. I was tired of building stuff for other filmmakers, so I blew my savings on a short film I called Night Crawl.

‍
My passion for practical effects and set construction is what made me make Night Crawl. I had an idea about building a prison block miniature because of how repetitive they are. It seemed doable. When I finally decided to direct a short, I took that idea and added a creature. I wanted to make something that felt very handmade and used every trick I knew. We filmed in an empty warehouse in Glendale, Calif., so everything was fabricated. We even hand-painted the credits. To me, filmmaking is about building worlds for people to escape into. My love of film has always been rooted in the idea of escapism. I hope to one day give someone the same sense of escape that movies like Gremlins or The Gate gave to me. Night Crawl is the beginning of this quest.