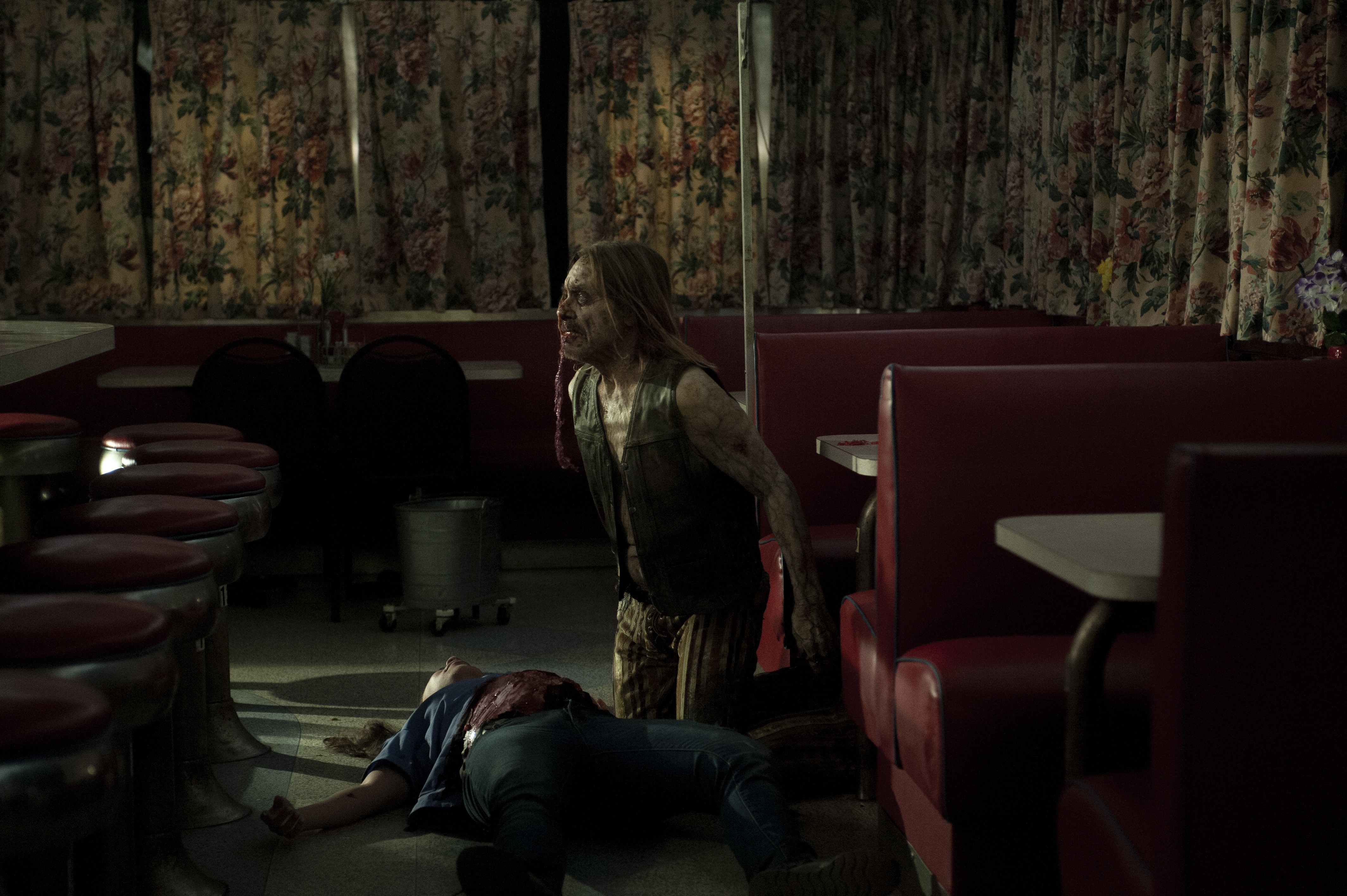 Iggy Pop gets his grub on in "The Dead Don't Die." (Photos: Focus Features/MovieStillsDB.com)

ince George Romero’s Night of the Living Dead created the modern zombie, those stories have sounded a warning about what could happen should the world take a turn for the worst. Whether commenting on social strife, rampant consumerism, nuclear apocalypse, or just humanity’s tendency to divide into factions and kill each other, zombie tales have provided a flexible metaphor for addressing deep fears of an Armageddon that might be just over the horizon.

But what about one that’s already in progress? Released to a mix of puzzlement, annoyance, and appreciation last summer, The Dead Don’t Die finds Jim Jarmusch taking on the genre with a light touch but a dark heart. It’s long been a zombie movie’s duty to sound a klaxon against calamity. Jarmusch settles for a half-hearted alarm in the midst of a crisis in progress. It’s decidedly not scary in the traditional sense, yet it’s terrifying in ways that cut deeper than the image of a shambling corpse with flesh-eating on its mind.

That’s partly because Jarmusch acknowledges how hard it is to find, well, life in zombies these days. There are, of course, exceptions. Set in a country in constant fear of annihilation, Train to Busan has a sense of urgency made even more powerful by its claustrophobic, creatively staged action. Black Summer explores what happens to a zombie story stripped to the bone. Festival reviews suggest Blood Quantum, set amidst a Native American tribe immune to the zombie plague engulfing the rest of the world, make it sound like one to watch for in 2020. Yet, generally speaking, zombies have become kind of dull, thanks in part to the deathless Walking Dead and the flood of would-be Romeros found on streaming services.

In some ways, that makes zombies ideal fodder for Jarmusch, who has made a habit of approaching film genres from a knowing distance. The more familiar a genre, the more room he has to play. His breakthrough film, Stranger than Paradise, evolves into a road movie whose protagonists end up sitting in a series of almost interchangeable rooms, fighting boredom and annoyance at each stop. Jarmusch’s first deep plunge to genre came with 1995’s Dead Man, a Western that went beyond revisionism to let one hapless man’s trip through the American frontier double as a psychedelic journey toward death. Regardless of the subject or setting, Jarmusch has always made Jarmusch films first. His previous venture into horror, Only Lovers Left Alive, lets vampires stand in for aging hipsters staring down ennui in a world that brings them a fresh supply of disappointment.

‍The Dead Don’t Die takes viewers’ familiarity with zombie conventions as a given. Even the characters within the film know the rules of the game and seem unsurprised when the dead start to rise from the grave. (Jarmusch named his production company for this venture Kill the Head.) A group of characters drives a 1968 Pontiac LeMans, as seen in the opening scenes of Night of the Living Dead, a ride another character describes as “very Romero.” So is the setting, the vaguely Pennsylvania town of Centerville. It’s the perfect place for the dead to walk again.

Ronnie Peterson (Adam Driver), a Centerville police officer in a bureau overseen by long-serving Chief Cliff Robertson (Bill Murray), calls it right away, pointing to zombies as the culprit not long after the discovery of two half-devoured bodies in the town’s diner. He sniffed disaster even earlier. As he and Cliff patrolled the eerily sunny town long after the sun has set, Ronnie delivers a line that will become a refrain: “This isn’t going to end well.”

Toward the conclusion of the film, The Dead Don’t Die reveals why he’s so confident: Breaking character, Ronnie tells Cliff that he’s read the script. “Jim” even let him read the whole thing, much to his co-star’s annoyance. That Driver knows he’s in a zombie movie —  earlier, Ronnie referred to Sturgill Simpson’s oft-repeated song “The Dead Don’t Die” as “the theme” —  is a rib-nudging fourth wall-breaking joke that doesn’t really land (unlike, say, a character played by RZA working for a delivery service named WuPS). It also plays like one of the film’s few attempts to soften the blow, to remind us we’re watching a movie while otherwise unfurling an unrelentingly grim vision of the moment in which we live (albeit one filled with gags, sword-wielding undertakers, and a coffee-obsessed zombie played by Iggy Pop).

A little over an hour into the movie Cliff, Ronnie, and their fellow officer Mindy Morrison (Chloe Sevigny) watch from the police station as their town becomes overrun with the undead. Cliff and Ronnie appear unmoved, but Mindy starts to panic.

“Guys, shouldn’t we be telling each other that it’s all going to be OK? That this will all go away like a bad dream?”

Cliff, on the other hand, does his best to console her. The age divide here doesn’t feel like an accident. Cliff means well, but he’s also part of a generation prone to believe (or maybe care) that its selfishness and short-sightedness won’t have consequences. Ronnie, on the other hand, sees things differently, as does Bobby (Caleb Landry-Jones), the young proprietor of a gas station/horror and sci-fi memorabilia shop. The only others as quick to catch on to the dire situation are residents of a juvenile detention center, who wisely escape at the first opportunity.

But escape to what?

The world is screwed before the movie even begins. Those long days are the result of something called “polar fracking,” a practice the government assures everyone is perfectly safe and has created a lot of jobs. If it’s tilted the Earth’s axis in the process, well, that just comes with the territory. As for who voted such idiocy into office, look no further than Farmer Frank (Steve Buscemi), who wears a red baseball cap with the slogan “Keep America White Again.” The title takes on new meaning the longer you roll it around in your head. It describes the film in literal terms. Simpson’s classically styled country theme turns it into a melancholy lament. But it also describes a whole generation seemingly determined to strip the planet for parts and determined to live, and run the world, forever. Moodily shot by Frederick Elmes, one of the film’s most chilling shots switches to slow motion as it focuses on a zombie kid wandering mindlessly outside a looted gas station. Whatever he might have been, he’s now an unthinking creature wandering a world of ruins.

In his New York Times review of the film, A.O. Scott describes Jarmusch as “a melancholy utopian, positing a world where most people are too cool to be cruel, and where aesthetic sensibilities take the place of political ideologies.” That description fits many Jarmusch films, none more than The Dead Don’t Die’s immediate predecessor, Paterson. Also starring Driver, who plays a bus driver with poetic aspirations, it offered meditative comfort to those who found it in the fall of 2016 in the aftermath of the election. But this is a film about the aftermath and what’s arisen from it. It’s as angry as Jarmusch’s violent, George W. Bush-era inspired 2009 film The Limits of Control, but more despairing. Cliff and Ronnie end the film fighting, even though they know the fight to be futile. They would be stuck in a situation beyond their control even if they didn’t understand they were characters in a zombie movie that had decided their fate for them. The world has tilted and there’s no going back. This isn’t going to end well.

Keith Phipps writes about movies and other aspects of pop culture. You can find his work in such publications as The Ringer, Mel Magazine, Vulture, TV Guide,  Decider, Polygon and The Verge. Keith also co-hosts the podcast The Next Picture Show and lives in Chicago with his wife and child. His all-time favorite horror film is Dawn of the Dead but he’s still baffled by the moment when the biker decides to use the blood pressure machine in the middle of the zombie attack. Follow him on Twitter at @kphipps3000.