Surprise: SORORITY BABES IN THE SLIMEBALL BOWL-O-RAMA Is Getting A Sequel

It's time to head back to Dickey's. 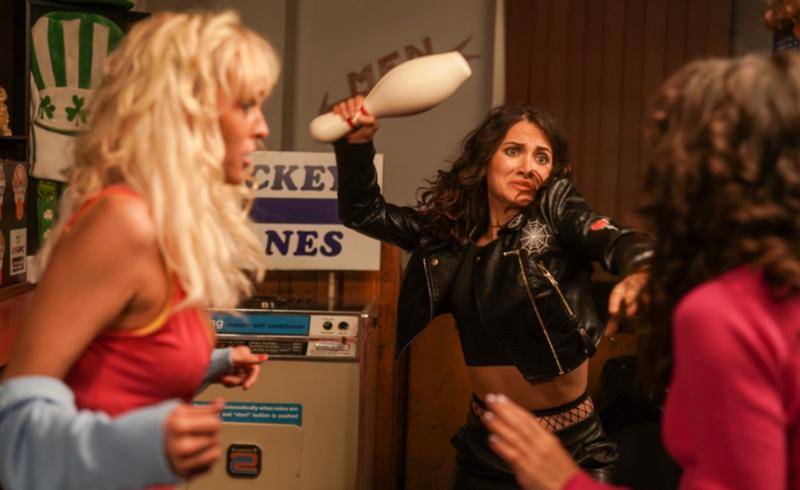 All the way back in 1988, before a sizable portion of FANGORIA's readership was even born, director David DeCoteau dropped Sorority Babes in the Slimeball Bowl-O-Rama, a delightfully trashy little horror comedy whose status as a cult classic has only grown over the years. You may have reasonably thought that that's where the Sorority Babes saga ended, but as it turns out - you'd be wrong.

According to a press release we just received here at FANGORIA HQ, the Sorority Babes and the Bowl-O-Rama and the iconic Imp are coming back via the good folks at Full Moon Features, nearly 35 years after the crew's original misadventures, and will hit Full Moon's Amazon channel and Tubi later this year.

That photo at the top of the page is our very first look at Sorority Babes in the Slimeball Bowl-O-Rama 2 (which was directed by legendary scream queen Brinke Stevens and stars Kelli Maroney, Glory Rodriguez and Audrey Neal), and this is our first look at the film's official plot synopsis:

The babes are back! And so is everyone's favorite wish-grantin', murder-lovin' mischievous gremlin, the Imp! The Pi Epsilon Delta sorority house has seen better days, but the girls are intent on gaining some new recruits! With housemother Auntie Snake as their guide, the naughty hijinks and hilarity begin. Meanwhile, though, the Bowl-O-Rama bowling alley has had a break-in, and a breakout! With the escape of the magical and murderous Imp, it's a fight for survival, with only one mysterious girl holding the answers to the riddle of the Imp's wish!

Oh, that Imp. Always with the riddles and the magic and the murder. We're excited to see what's become of that lil' scamp in the intervening decades, and also to see what sort of horrifying hijinks he has planned for an all new generation of Sorority Babes. There's nothing further to report at this time, but rest assured we'll keep you informed as we get closer to the release of Sorority Babes in the Slimeball Bowl-O-Rama 2!

And, hey, while you're waiting, why not check out the trailer for the original?