Back into the Dark -Stephen Lang on DON'T BREATHE 2

The actor on The Blind Man’s journey of faith and violence. 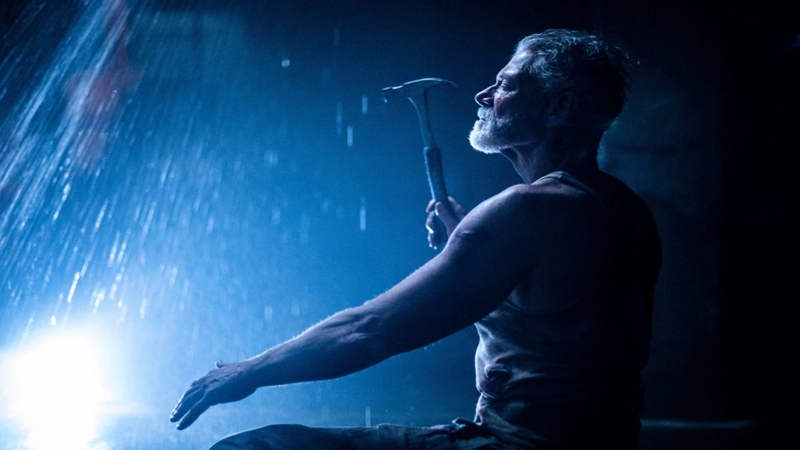 “Now you’re gonna see what I see.” Director Rodo Sayagues and co-writer Fede Álvarez lead audiences down into a new level of darkness in Don’t Breathe 2. And of course, the sequel would be incomplete without The Blind Man himself, Stephen Lang, who so memorably carved out a space among modern horror antagonists in the first entry. Lang, who is, of course, no stranger to the genre, adds additional layers to the already complex character.

Set years after the first film, this new entry explores another side of The Blind Man, forcing him, and perhaps the audience, to confront some difficult truths about the character as he takes it upon himself to save his adopted daughter, Phoenix (Madelyn Grace), from a band of kidnappers who have mysterious plans for her. No longer simply facing a trio of teenage robbers, The Blind Man is pit against a lethal criminal organization, who tests him in new ways and allows the full extent of his Marine training to be unleashed in a variety of gruesome ways.

FANGORIA talked with Lang about his new film, which is only in theaters on August 13th, the character’s evolution of mind, body, and spirit, and fairy tale-esque quality that make the two entries two distinct pieces of the same puzzle.

Compared to the first film, I think you have a chance in this one to be a little bit more of a protagonist than the antagonist. The Blind Man gets to delve into some of what’s done in the past. Did it feel any different for you embodying the character this time around?

Well, I don’t want to say anything that would imply it wasn’t. The first time around had all sorts of nuances and depths to it as well in terms of how I felt about playing it. But I will say that the first time playing the role, just because of the nature of the story and the way it’s told, there is kind of a ruthless efficiency to the character of The Blind Man where he really operates in very straight lines, moving with tremendous self-assurance. And of course, that has to do with his environment, which is one that he controls totally. And that’s completely absent in the second film. So that creates, certainly, some real vulnerability on his part. But the other thing is, he’s not just operating as a solo agent in this second film. He is responsible for something. There’s something that he cares deeply about. Someone that he cares deeply about. And of course, that also creates vulnerability and can be counted as a weakness. So, I would say so much of what was so fascinating about playing it this time around had to do with articulating the weakness and vulnerabilities in the character, every bit as much as the kind of gnarly strength of the character.

Did you use the same contacts as you did for the first film?

Did The Blind Man operating in a bigger space – outside of his house – require any changes to your performance or additional research?

Much additional research, training, really. I spent many hours with Samantha Gartland, the Director of Movement and Orientation, at NABA (Northeastern Association for the Blind) in Albany, NY. We took long sightless journeys in the city, the forest, by the river, in fields, inside buildings, on stairs, crossing busy streets, elevators. I cooked, did yoga, lifted weights, showered and groomed - basically as many ordinary life tasks as we could think of. It was very helpful. The objective, of course, was to function competently and confidently outside of the comfort zone of my home.

One aspect that I thought was really interesting about the character in both entries is his faith. In the first film he says, “there is no God” and in this latest film he says, “God is fair.” So, I’m curious about his journey from one distinction to the other and how that shades his morality and relationship with Phoenix across the years of the two films.

Yes, that’s a great discussion to have. I think in the first film the depths of his cynicism and the depths of his despair, that is the conclusion he has come to. That he is alone in a cold void of a universe. And then, however despairing and low he was before the first film, he’s really laid out at the end of it. He’s lying on the rocks, on a rocky coastline at that point. And that’s a good thing because he really finds out what the bottom is. But somehow during his reflections it occurs to him that maybe what went down had something to do with retribution. Maybe there was some kind of a cosmic, divine quality, or intervention that was going on there. Maybe he is not alone. Maybe he is being noticed by…something. And I think that that thought just lingers. It’s there. It lives. I don’t know that it’s completely hatched, but it’s there. And then what happens? One day when he’s walking his dog, he comes across a little girl who’s just washed up on the shores of his life. And that blows his mind completely. He is basically being charged in that moment with a responsibility to nurture and protect this creature. And it seems to me that there has got to be something providential about that. And so, as you point out, he goes from “there is no God” to “God is fair.” That’s a huge leap. That’s a great difference in faith. That’s a great development and evolution. And in its way [Don’t Breathe 2] continues to explore that notion. It’s one of the cool themes of this film.

The Blind Man faces greater physical challenges in terms of his adversaries in this film. How many of your own stunts did you get to do for this?

Well, I was involved in every fight and every stunt that happened, but I certainly depended on a really terrific stunt team to take some of the tougher blows and the leap through the window. I’ve done many falls over the years. I’d be willing to do it but they’re not willing to have me do it. And they’re right to do so [laughs]! Because you don’t want your guy getting hurt, because I’ve gotta work tomorrow. And just as important is the guy who’s doing the fall does it so well. He can really stick the landing! I’ll do the fall, but I may not get up again [laughs]. So, there you have it. But certainly, I was deeply present for every fight. And there are some where there’s no closeup, so its stunt guys involved. I think that’s an accurate answer. I’d have to go through the film. But why? It’s all about making the role. The role is so much more important than me. I have no vanity when it comes to doing my own stunts. I’m quite happy to do them, but I’m way past it being a matter of pride. I just want the role to come out as convincingly as possible.

When I spoke to Fede Álvarez the other day he mentioned that perhaps American audiences are sometimes uncomfortable with exploring the moral gray areas of characters, which is what he considers these films to be about. Do you feel any of that discomfort when playing The Blind Man?

Do I feel any of that discomfort personally? No. And I completely agree with Fede when it comes to that statement. We are very much a polarized, black and white country. We want our heroes to be Superman and our villains to be Satan. And it’s just profoundly uninteresting. I mean, look, it sounds like I’m knocking against Superman and I’m not. I will knock Satan. But gray areas are where things get really, really fascinating. When we talk about classical stories, whether they’re classical myths that have been around for several thousands of years, or whether we’re talking about fairy tales that are hundreds of years old, there are always areas of gray. They’re dark. Whatever heroism is displayed in them is usually offset by some relatively heinous behavior as well. So, I love the morally gray areas. That’s where the fun is in terms of exploration. And that’s where the responsibility is for the audience if you get into it. You’ve gotta kind of make some decisions yourself about what you really think. That’s one of the things I really dig the most about Don’t Breathe, one and two. They play around with your sympathies, your affections, and emotions as an audience. We’re not trying to make it easy for you.

In terms of these films serving as modern myths, do you think that there’s room for The Blind Man’s myth to continue in future films?

Well, I think it’d be premature to talk about further exploration of the character. I think it’s very, very important that each of the films so far, Don’t Breathe and Don’t Breathe 2, are each a complete entity and complete piece of art. And then placed together I think they really do shed some light on each other. They’re of a piece, but also very distinct. So, they seem to exist quite beautifully as a pair at the moment. Having said that, I have tremendous regard and affection for the character of The Blind Man. Whether I ever explore him again or not, who knows? But he’ll always live in the library of my heart. I’m really sidestepping the question [laughs].