Hwang Dong-hyuk, social media, and how we define "success". 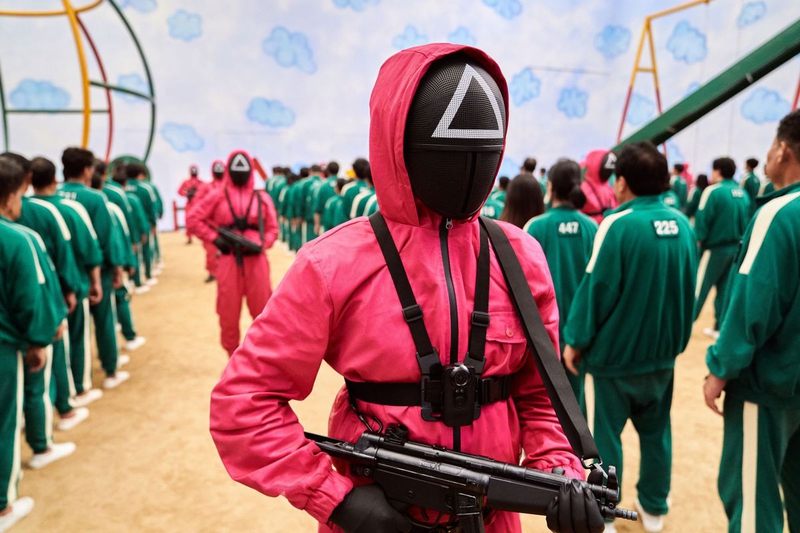 By now you've likely seen, or at least heard of Squid Game, the Korean Survival/Action/Drama series that premiered last month on Netflix, and quickly became one of Netflix's most popular shows on the platform.

That is in part due to the sheer quality of the series itself, of course, and let's be clear, the show is very, VERY good; one of Netflix's more ambitious and experimental endeavors as of recent. But you can't ignore the other, very important aspect to the film's success is its hold on social media. Now, of course, in the age of streaming, shows are talked about on social media all the time - it's a natural occurrence - but Squid Game, in particular, has had a hold on it at the moment.

(No offense to The Crown, its presence on Twitter can't hold a candle to the discussion capacity that Squid Game has.)

From people revealing that they never heard of Red Light, Green Light before, to critical discussions on the accuracy of the show's translation, suffice it to say there are many conversations going on about the show.

However, one, in particular, stood out to me personally - one that focused on the creator of the show, Hwang Dong-hyuk.

‘Squid Game’ creator Hwang Dong-hyuk wrote the show in 2009 but was rejected by studios for 10 years.

He once had to stop writing the script + sell his $675 laptop due to money struggles.

600k+ Likes and counting. And that's not even accounting for general impressions, meaning it's likely that tweet was seen by millions of people. Many responses to it were in the form of positive affirmations. '

"Believe in yourself", "Things take time." "Always bet on you in the long run."

Always bet on you. https://t.co/pR0kiSQj0b

Others took the tweet in a less positive fashion, showing concern or dread at the prospect of having one's art constantly denied for years until someone else decided it was of value.

Appreciating how many people are seeing how this is the opposite of inspiring. Most people do not have this resilience. The vast majority of artists GIVE UP by this point. We've lost an uncountable amount of expression this way. This is depressing. https://t.co/PZoR2GM7Pj

the moral of the story is that studio executives literally have no idea what will actually entertain people and that independent cinema would have circumnavigated a decade of suffering. https://t.co/l6uqR0Hub8

And ppl wonder why our migrant parents don’t encourage us to have careers in the arts 😂 https://t.co/Z1wLtsXsie

Work hard, believe in yourself, and one day you too can win basically a talent lottery that leaves countless artists drowning the mud while major entertainment conglomerates spend most their time sucking every last tedious dollar from exhausted intellectual properties. https://t.co/aB2aoxRFPM

I found both forms of response and the initial tweet itself a bit odd, since they seem to infer that Hwang Dong-hyuk hadn't found success until Netflix decided to produce Squid Game.

Nothing could be further from the truth.

To be fair, Hwang Dong-hyuk doesn't have the same western popularity as the go-to Korean directors, i.e., Park Chan-Wook or Bong Joon-Ho. In fact, when you google Hwang Dong-hyuk's name, you get more images related to Squid Game than Hwang himself, and it is a testament to the creative resilience of Dong-hyuk that he still made the project he wanted after years of having it passed on. However, the director/writer has had a largely successful career for ten years now in his home country of South Korea.

His 2011 movie Silenced was his first hit in Korea, after a career of shorts and his independent debut film My Father, in 2007. Silenced starred future Train to Busan stars Gong Yoo and Jung Yu-mi. Based on the real-life events in South Korea in the early 2000s, it covered an abuse scandal at a school for the hearing impaired, and the subsequent leniency shown to the perpetrators by the police and courts.

Not only was the film a financial success, with more than 4.5 million tickets sold and 30 million dollars in the box office, but the film also sparked public interest back into the real-life case, and discussions about corruption and light sentences in abuse against children. The school where the real-life events happened was shut down, new arrests with serious sentences were made, and the Korean National Assembly, the equivalent to Congress or Parliament, passed a law getting rid of the statute of limitations for abuse of children under the age of thirteen and disabled.

Now, this may just be an opinion, and I know everyone's got them, but I'd say having a film that literally enacted legislative change in your country is somewhat indicative of success.

His career hardly stopped there, with his next film Miss Granny having more than eight million tickets sold and grossing more than 50 million dollars in Korea. That placed it in the top thirty highest-grossing Korean films. twenty-seventh, to be exact. For comparative sake, Parasite is nineteenth, and the rank equivalent for the U.S. is Pirates of the Caribbean: Dead Man's Chest. His latest film project, The Fortress from 2017, was also a success, opening at number one.

Now at this point, a fair question would be what does his career rundown have to do with a tweet that could ultimately be seen as benign.

Well, I think it's indicative of some interesting things. One being how less than accurate narratives can start and go viral on social media. 620k likes, 113k retweets, and 16k quote tweets, many of whom think that Dong-hyuk has been solely trying to get Squid Game off the ground for 10+ years, struggling all the way. Again, while it's in theory a benign misrepresentation, it is one all the same. It'd be just as inappropriate to be in South Korea, and frame a new Seth Rogen project as his big break and success just in the instance that he had a popular show there.

But on a more nuanced level, how western audiences measure success.

While yes, it is a pretty objective fact to say that making a deal with Netflix, and having your show become its number one product is a huge deal, but Hwang Dong-hyuk is one of the most influential South Korean directors in the 2010s. Simply, he would not have gotten his deal with Netflix had he not shown his track record of success both critically and financially.

But many people based outside of Asia aren't privy to his success in his home country. The measure of success is based on breakthrough creators, those who have their work matriculate to western audiences for some reason or another i.e., Bong Joon-Ho, Park Chan-Wook. He's not a success until he's a success to U.S. (pun intended).

Now, this isn't done maliciously by any means. Many people's consumption of Korean film or television are relegated to a handful of TV shows or films that spread through word of mouth or online discourse, especially if they're not actively seeking Korean media out.

Then there's the separate conversation on when said Korean media gets a proper translation, if it ever gets any type of distribution outside of Korea, and the means in which we can -legally- watch it. Admittedly there are many factors at play here, but in the age of the internet, especially if you're going to make a statement like the aforementioned tweet did, let's make an effort here.

Let's give Hwang Dong-hyu his due.

He's much more than his early struggles and Squid Game.

Squid Game is now streaming on Netflix. Click below to watch now: