Sometimes, The Bear Eats You: John Frankenheimer's 'THE PROPHECY' 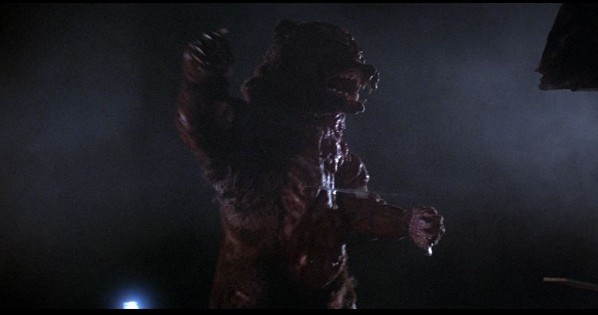 Sometimes, The Bear Eats You: John Frankenheimer's 'THE PROPHECY'

‍"...one of these days, the Earth will get even with man for messing her up with his garbage. Just let man continue to pollute the Earth the way he is, and nature will rebel…and it’s gonna be one hell of a rebellion.” ‍

These musings are contained within the opening narration to Food of the Gods ('76): a loose drive-in cinema mutation of H.G. Wells' prophetic science fiction tales, brought to goofy life by noted schlock maven Bert I. Gordon (Earth Vs. The Spider ['58]). In Gods, a Canadian hunting trip becomes a fight for survival, after a group of friends and locals fall prey to a gaggle of bloodthirsty, oversized animals. There are giant rats, giant wasps, and giant chickens (oh my!), all looking to feast upon the flesh of these puny homo sapiens.

Via a mixture of miniatures, trick photography, and lo-fi creature SFX, Gordon turns seemingly harmless creatures into harbingers of the world’s end. The cause? A batch of gunk fed to the beasts by local farmers (from jars conspicuously labeled “F.O.T.G.”) that’s simultaneously being sought after by a shrewd businessman. It’s a treatise on growth hormones before those were really a thing we cared about; a janky, junky tackling of capitalism that leaves nearly every character chomped and/or stomped by the end of Gods’ 88-minute runtime. Naturally, the final shot sets up a sequel (Gnaw: Food of the Gods Part II [‘89]), which showcases overgrown children telling grown men and women to “get the fuck out” of their rooms under threat of bodily harm.

Food of the Gods was just one of many environmental horror/animal attack hybrids to emerge from the ‘70s: a booming subgenre that cropped up mostly due to the massive success of Jaws (’75), as well as a post-Flower Child generational concern that we, as human beings, were doing massive damage to the planet (maaaaaan!). Yet even before Bruce the Shark was making mince out of Alex Kitner and Quint’s sea legs, there were several silly genre instances of Mother Nature “striking back” against her constant assailers. Just look at the sublimely silly Frogs (’72) – in which a youthful Sam Elliott battles back against the titular reptiles (as well as their pissed off insect brethren) – to see how even an isolated millionaire can invoke the wrath of this blue and green globe.

The pulpy expression of these fears is arguably a filmic extension of the nuclear panic pictures that populated movie palaces during the ‘50s, in which A-Bomb anxiety gave way to massive marauding monsters. Be it the abominable Beast From 20,000 Fathoms (’53) or the stampeding, irradiated ants in Them! (’54), many folks’ Cold War dread became represented by rubbery creations awakened by man’s most destructive wartime device. Most famously, Ishirō Honda’s Godzilla (’54) saw a nation’s grief over a devastating conflict take the shape of the most recognizable kaiju icon of all time. In short, these worries weren’t localized, but instead a universal survival instinct born from the world witnessing technological advancement lead to mass annihilation.

Which brings us to Prophecy (’79): John Frankenheimer’s woefully underseen mutant bear epic, in which chemicals from a local logging mill lead to more than just oversized fish populating the Maine wilderness. Unlike William Girdler’s Grizzly (’76) – where manly trash cinema staple Christopher George battles an equally belligerent beast – Frankenheimer’s movie is less of a Jaws rip off than it is a grab bag of jumbled progressive politics, revolving around an ancient Native American myth (named Katahdin) that’s been raised to protect the land and its people against the onslaught of man’s continued commercial interests. In short, if you believe you can get away with dumping methylmercury in a beautiful body of water: think again. Because Katahdin is gonna be coming for that ass if you do.

Right off the bat, Prophecy’s political concerns are made pretty clear. Our hero is Dr. Robert Verne (Robert Foxworth), a bleeding-heart liberal whom we meet treating underprivileged children in the ghetto. Upon discovering that an outbreak of disease is due to the filth and pestilence that’s built up on account of landlord neglect, he wishes he could put the evil rent collector in jail. But Robert also knows that these poor, suffering people are merely the byproduct of a capitalist system gone awry. The devils at the top will probably never be prosecuted, thanks to their seemingly bottomless stockpile of wealth and privilege.

The ironic thing about Dr. Verne is that, despite trying to play Hippie Jesus in the streets, he’s really nothing more than a neglectful egomaniac between the sheets. His poor wife Maggie (Talia Shire) is pregnant, but too terrified to tell Robert, as she knows he doesn’t want any children. So, when the strident physician accepts an assignment to intervene in a dispute between a Northeastern logging company and the local Native American tribe, Maggie tags along, carrying a secret that she dares not share, for fear of upsetting this noble white savior.

From the pre-credits set piece – where a bloodhound team heads over a cliff and is subsequently mauled by an unseen, shrieking monster – it’s clear that we’re in the hands of a master craftsman. By ’79, Frankenheimer was an old pro, having delivered a trilogy of paranoid American masterpieces (The Manchurian Candidate [‘63], Seven Days In May [‘64], and Seconds [‘66]), as well as a run of meaty pulp pictures (99 and 44/100% Dead [‘74], French Connection II [‘75], and Black Sunday [‘77]). His sense of anamorphic grit shines through as soon as we’re in a tiny biplane, flying with Dr. Verne and Margaret over a gorgeous Maine mountain range (or, at least, British Columbia standing in for Stephen King’s home state). Visually, Frankenheimer’s allowing the wilderness to swallow us whole: a crisp Garden of Eden (as the locals call it) where nature provides everything a man could ever need to live a long, healthy existence.

Frankenheimer has always owned an affinity for broad-chinned, manly men (just look to his work with Burt Lancaster on undervalued action classic, The Train [‘64]). In Prophecy, there’s no shortage of these sorts of hunks, as Armand Assante slathers on the bronzer to become John Hawks, the young Native leader who won’t stand down against encroaching lumberjacks, even when they put a buzzing chainsaw to his throat. Hawks knows that these greedy agents of bleached stationary are doing far more than simply cutting down trees. “The environment is us,” he tells the haughty doctor, before going into detail as to how his people can barely keep their wits about them anymore, thanks to whatever that damned mill has been oozing into their stunning microcosm.

Even after seeing a tadpole the size of a Yellowfin Tuna, Dr. Verne isn’t 100% convinced until he has a look at the plant for himself. It’s here that the factory’s foreman (Richard Dysart, layering the Northeastern twang on thick) shakes his fist at the nosy bureaucrat, wondering aloud just how many pages his report back to the Environmental Protection Agency is going to be. A hundred? A thousand? “You demand, and we supply,” he barks, muddying the waters for this noble do-gooder. Sure, Robert’s been dispatched with the Earth’s best interests at heart, but his own work is going to cost more than its fair share of former saplings.

As the legend goes, writer David Seltzer based Prophecy’s script on a tragedy that befell the Japanese city of Minamata. It was discovered that toxic waste was being deposited into a nearby bay from a chemical plant, causing hideous deformities and neurological erosion among those who were unfortunate enough to call the Kumamoto prefecture their home. It was a mini apocalypse that led to a full-blown disease named in its aftermath (Chisso-Minamata Disease), as well as an international treaty, designed to protect human health and the environment from anthropogenic emissions and releases of mercury compounds (The Minamata Convention on Mercury).

Thankfully, Frankenheimer knows full well that he isn’t crafting some dry investigative procedural, and right when you feel the need to check your watch, his schlock instincts kick in fast and furious. Standing near seven feet tall and looking like a malformed dragon*, Katahdin utterly wrecks a vacationing family’s weekend by graphically decimating the dad and then vaporizing one of the children while he’s trying to hop away in a banana yellow sleeping bag. It’s a hilarious sequence that finds a way to balance out the movie’s misplaced self-seriousness, as the back half of Prophecy turns into a literally explosive horror extravaganza.

You want to see a nerve-wracking tunnel escape shot almost entirely using split diopter? Frankenheimer’s got you covered. How about Jeeps blowing up like the director suddenly decided to turn Prophecy into a war movie? This is Golden Age “70s PG” stuff, blurring the line between thoughtful, adventurous melodrama for the whole family, and straight up horror show for the hardcore heads. Naturally, Frankenheimer includes icky baby bears and a final jump scare that promises a future showdown with the Native American god (that sadly never arrived in theaters). Because that’s what consummate genre professionals do: they deliver just what the audience wants, while elevating their movie a few notches above standard grindhouse nonsense.

So, while Prophecy may seem – at least on a surface level – not too far removed from a Bert I. Gordon joint, don’t be fooled. Paramount Pictures hired the right man for this somewhat idiosyncratic creature feature and, in turn, Frankenheimer didn’t just phone in a simple journeyman job. Prophecy is muscular and gross and chock full of contradictory messaging. That’s probably why we’re still watching it forty years on: as a reminder that sometimes man eats the bear, but most times the bear eats man.

*Apparently it was Frankenheimer’s idea to alter the original monster design (which was a closer match to the movie’s iconic poster art) to make it more “bear like”. ‍

Prophecy is available now on Blu-ray, courtesy of Scream Factory.