‘Seek’ And You Shall Find: An Interview With Filmmakers Aaron Morgan And Eric Vespe 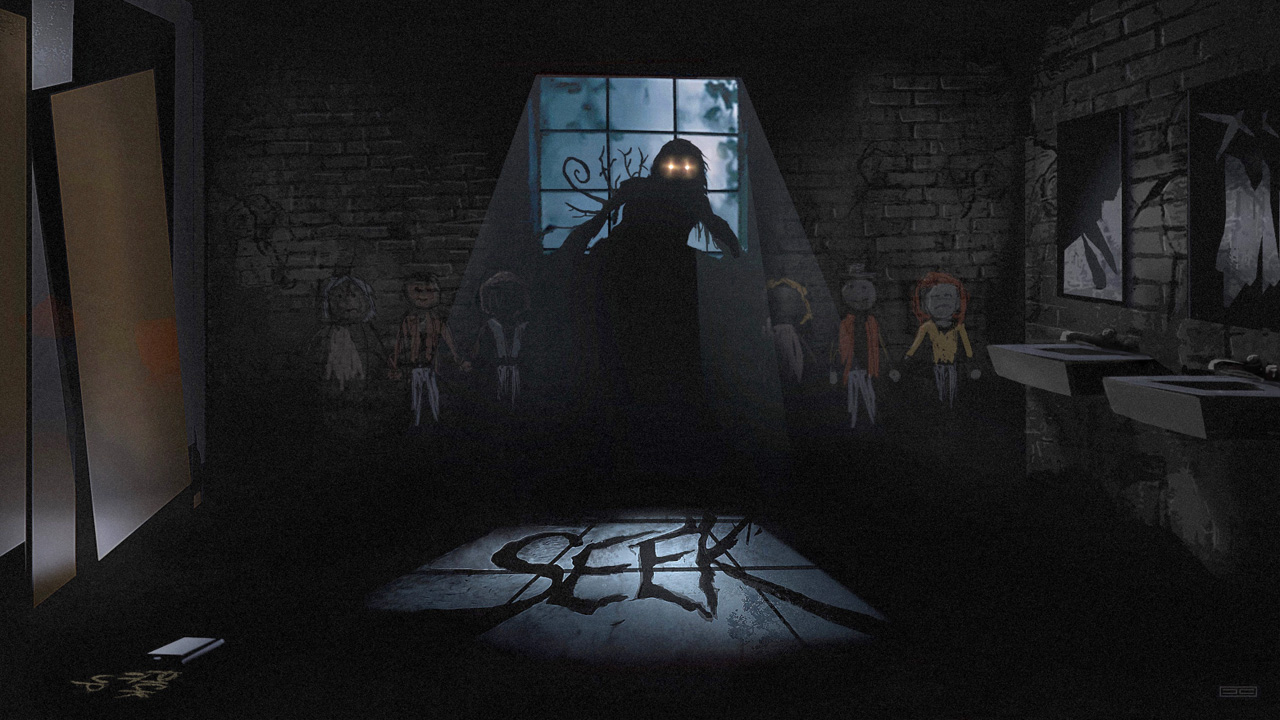 ‘Seek’ And You Shall Find: An Interview With Filmmakers Aaron Morgan And Eric Vespe

Originally slated to premiere at South by Southwest in Austin, Texas, Seek is a taut, well-crafted horror short written by Aaron Morgan and Eric Vespe, and directed by Morgan. With some killer practical effects by two-time Academy Award nominee Arjen Tuiten (Pan’s Labyrinth and the upcoming Ghostbusters: Afterlife) based on concept designs by WETA Workshop, Seek tells the tale of two estranged sisters forced to play a horrific game with a mysterious creature.

Not only did we get to check out the film a little early, but we also got to talk to the filmmakers about their process, inspirations, crafting feature “The Lonely Child” and the next steps.‍

This interview has been edited for content and clarity.‍

‍FANGORIA: How did you two first meet? What prompted you to start working together like this?‍

Aaron Morgan: It's funny: Short films actually brought Eric and I together.

Back in the day, early in the internet days when Atom Films had a short film website, I volunteered with them to take a small, curated program around to places like the Alamo Drafthouse and show it to people. Eric was working as a journalist and so I reached out to him to check it out, which he agreed to. He showed up and we ended up bonding over the fact that I had a Crouching Tiger, Hidden Dragon DVD before the movie had even come out in theaters because I had figured out how to import DVDs from overseas.

And, at the time, I was in film school and we started talking about filmmaking and writing. And I'd always been a huge admirer of Eric's take on movies and his enthusiasm for movies.

When I was 12 years old, I read a book called Sins of the Flesh, and I absolutely fell in love with it. I remember asking my mom, “When is this going to be a movie?” Because, in my brain, every book got to be a movie.

And when I found out that it wasn't going to be a movie, I got really upset and decided that I'm going to make it a movie someday. So, in film school, we actually tracked it down and I got an option on the book. And I came to Eric and said, “Hey man, I bought the rights to this book that was my childhood dream to adapt, but I could really use a creative partner to help me bring this to life. And it's kind of ‘Stephen King-y’ and I know you love Stephen King … what would you think about writing this with me?” And Eric was like, “Fuck yeah, let's do that.”

And that was the beginning of a beautiful relationship and friendship, and we've been writing stuff together ever since.‍

Eric Vespe: It's been an interesting journey because at that time I hadn't really written anything. We took a stab at that and then we wrote another feature, The Home, that almost got made and didn't. But we connected instantly as friends.

It's crucial when you have a creative partnership like this because there's so much of your own self that you put into writing. You really have to trust the person that you're working with because, if you don't really connect and respect each other, it can be a very contentious process.

And I've never really felt anything besides creative freedom and support throughout. Every project that Aaron and I have done over the years has felt like that. And I can't imagine trying to go through this with anybody else.

AM: Just doing the work and creating together has been fun and its own reward. We keep doing it and we're hopeful that we get to keep doing it on a bigger and on a larger scale in the future.‍

FANGORIA: Talking about bigger and larger, this short is really a cool look into an almost familiar world, like an urban legend we’ve heard about forever. What was the inspiration for this short, and where do you see that story going?‍

AM: We definitely have the feature idea flushed out.

Eric and I take a lot of road trips together, and I remember always looking at, like, the abandoned buildings out in the middle of West Texas, heading to LA. They are these really horrible, run-down looking bathrooms and I kept thinking to myself, “What is the story of that place? If you were desperate enough and you had to use the bathroom, what sort of things would you find in there?”

That, in combination with a weird nightmare that I had about a creature in a bathroom taunting me, turned into one of those 2 a.m. calls where I called up Eric and was like, “Hey, I had this weird idea, what do you think?”

And then that spun into this larger mythology that we're pretty excited about. That explores a theme that I've been thinking [about]: We’ve been talking a lot about bullies getting away with things. It seems like really terrible people are getting away with really awful things right now and we wanted to explore a story about that.

The feature idea that we have is called “Lonely Child,” and it's definitely exploring the sins of the past being buried away and then many years, possibly even decades, later, that thing coming back and making sure that the people will finally get their comeuppance. It may just be wish-fulfillment, but I think there's an interesting story to tell in horror and with this creature, that would be very satisfying right now.‍

EV: For the short, we definitely wanted to challenge ourselves and to get across a mythology, to give a peek of a larger world. And to me, that was the most fun aspect of coming up with it, delving into how the chalk figures appear and showing that there is a supernatural element at play. And to me that was exciting.

That's the stuff I'm most looking forward to expanding upon in the future.‍

AM: Little things in the dark are sometimes much more terrifying than some giant creature stomping across the city. We definitely wanted to explore the idea of what would happen if something very childlike was imbued with horrific supernatural powers and was very angry about something that had happened to it? What would its personality be like?‍

EV: We're also hoping we get across that the creature itself has more than one dimension: He's a little playful, a little mischievous and also very deadly and angry. That all definitely comes into play in the bigger story.‍

FANGORIA: Let’s talk about the creation of “The Lonely Child,” itself. It really turns out very well in the finalized form … what was the process to bring that to life?‍

AM: Well, our first step is always to go to Richard Taylor (WETA Workshop) for this stuff. He helped us on The Home and created a lot of our key art for that pitch, which was a huge part of that getting so close to production. He has such a brilliant mind and such a love and passion for monsters and creatures and horror. So, we sent him the script for it, and I talked to him a lot about the character and the back story of the character, what it is, where it comes from. And he just instinctively knew.

I gave him a couple of reference images: different animals, different marine life and some mummified children, as an interesting mix of ingredients. He sent back a couple of different versions, with some of them looking like Chucky from Child's Play as a Cupid, which was an interesting take, or one that was closer to a Grimm's Fairy Tales sad, demonic creature.

Our friend Kevin McTurk (The Haunted Swordsman) actually put us in touch with Arjen Tuiten, when we said we were looking for someone to help us bring the creature to life. Arjen was an apprentice of Rick Baker, Stan Winston and had been doing this stuff since he was a teenager, with a mind towards dark fairy tale stuff.

He got very excited about the art, made a couple of changes on his own and then built us an animatronic puppet that was just absolutely brilliant to work with. In between working on Maleficent and Ghostbusters, he actually flew out to Austin and spent three days with us on set to puppet the creature and make sure that it was working correctly, which blew our minds. But he really believed in it and he really believed in the bigger-picture idea as well. Getting to work with someone on his level was a dream come true.

The minute the puppet arrived in this giant crate to the stages that we built the bathroom set at, everyone instantly fell in love with it. Anytime it would move his eyes or open its mouth, it was absolutely brilliant.

And by the way, the first time we met Arjen, we went into his office in Glendale, he had a FANGORIA issue on his desk. So, we made sure to get a picture, in that very first meeting, of him posing with that Fango issue. He’s a massive fan, so he'll be more than thrilled that we're talking to you guys.

FANGORIA: I love it. So, now you're figuring out the next steps for the short and where it's screening, after SXSW was canceled. But I know that you have a few other festivals lined up already. Where can people watch Seek? ‍

AM: We've submitted to some other festivals that we're excited about and then eventually we'll put it out online, towards the end of this year, for everyone to see.

And hopefully, if we do, maybe we'll get to come back to SXSW with the longer version, the 90-minute version of the short film. That would be a nice end to that story.‍

Brandon Wainerdi is the VP of Marketing for FANGORIA. If there is a tweet from the @FANGORIA account that made you exhale through your nose, it was probably one that he tried to stop. He can be heard weekly as one of the hosts on FANGORIA Frequencies and The Creepshow Show.