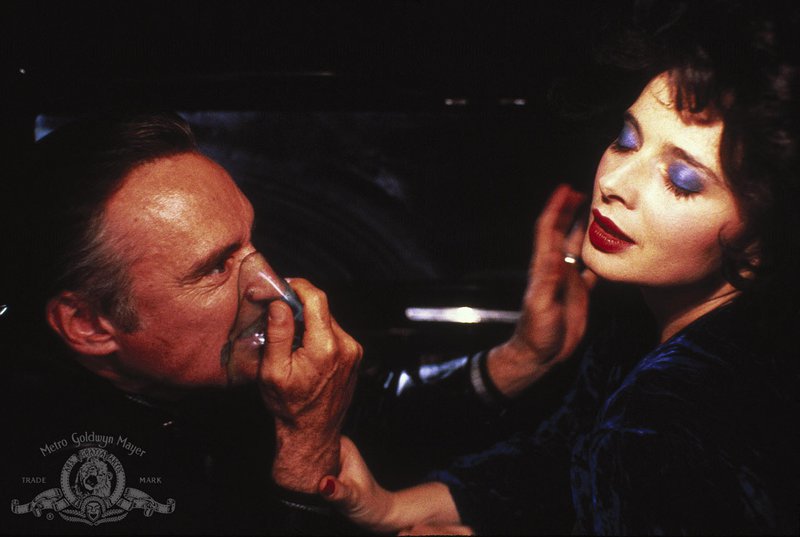 Get a whiff of Dennis Hopper and Isabella Rossellini in BLUE VELVET.

Well, they call it March Madness for a reason, and this month our contributors (many with movies releasing in the days ahead!) call up a roster of classic films that left a lasting impact on their sensitive psyches. Did any of these horror flicks traumatize you in a similar fashion? Do tell!

“I can’t say there is a movie that changed or scarred me for life, but the movies that had a big impact on me as a person and as a director were movies like Jaws [1975] and Halloween [1978]. For a long time, I thought movies were not able to scare me anymore, until I saw Jaws and jumped out of my seat when Hooper is underwater and Ben Gardner’s head comes out of the hole in the boat. That scene inspired the scene in my first feature The Lift, in which a body suddenly falls through the open hatch in the roof of the elevator car. It was a great jump scare, so I am very grateful to Steven Spielberg. And Halloween was for me an example how to scare an audience with very simple means. A very effective slasher and great inspiration. John Carpenter is a hero.”

“When I was 13, a friend of mine and I decided to only rent movies beginning with the letter ‘B.’ After a quick stop at the video store, perusing the alphabetically-sanctioned opportunities, we settled on Blade Runner [1982], Brazil [1985] and Blue Velvet [1986]. We’d never seen the movies before, and our selection was partially motivated by rumors, or in the case of Brazil, purely by the cover: a man’s head exploding into a variety of phantasmagoric shapes. Sold! After a marathon movie screening, my friend hated all the films, and I loved all of them. After that, I knew our friendship was irrevocably doomed.

“Since FANGORIA is devoted to horror, I will skip my commentary on the other two movies and instead focus on Blue Velvet. Is Blue Velvet a horror movie? I would argue an emphatic, ‘yes!’ Blue Velvet truly scarred me for life. The candy-coated, tulip-adorned exterior betrayed a deeply terrifying interior. Infinitely more petrifying than vampires and werewolves was the monstrous Frank Booth in his leather jacket and Amyl Nitrate-inhaling apparatus. Blue Velvet seeps into your skin, convincing you that behind every serene community something is lurking, something unknowable and unconquerable. The horror space of Blue Velvet is the haunted house of a tortured human mind. In that cobweb-filled chamber is more pain than any medieval dungeon. And like a monster movie, like The Blob, Frank Booth’s oppressive patriarchal neuroses contaminate everyone he comes in contact with, including Jeffrey Beaumont. Viewed through the eyes of a 13-year-old, Blue Velvet felt like a fascinating, urgent warning about adults, especially adult men, and the mess they make of things.” 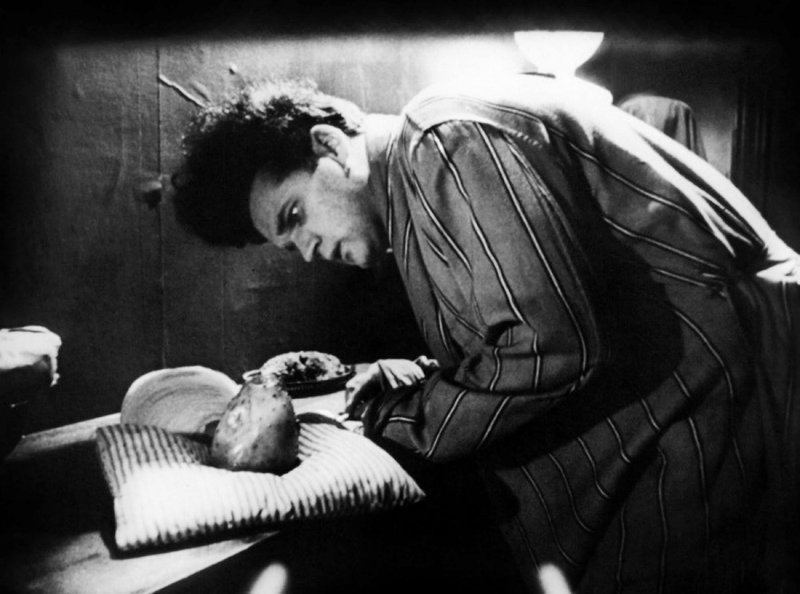 “When I was very young, my dad gave me a video of Eraserhead [1977] at the time I first started mumbling about wanting to make films. He was like, ‘This is the only film I ever walked out of in the cinema. I don’t get it. But maybe if you want to make films, you should watch it.’ And I was like, ‘Oh, films are going to be like this? Cool!’ What scared me most as a really little kid was Gremlins [1984]. It scared the shit out of me, especially when they first transformed. I couldn’t sleep for nights.”

“I grew up ferociously reading Stephen King novels, and I was probably too young to be doing so in hindsight, but I fell in love with how he was able to create these amazing worlds and characters, all from a blank page. The first horror movie that built on that literary foundation and made me really want to be a writer/director, was A Nightmare on Elm Street [1984]. It scared the shit out of me, and when I go back and watch Craven’s work now, I’m still in awe, I’m still inspired, and if I’m being honest … it still scares the shit out of me.”

“Brides of Dracula [1960] did it to me. Those fangs, those nightgowns and those lips. Made me want to be Dracula (or Baron Meinster, as the case was here in this Hammer classic), so I could have a harem of wives that let me sleep all day and only came out at night for dark fun. Forever young and Gothic sexy hot.”

“I never believed in God when I was growing up, but The Exorcist [1973] made me believe in the Devil. I saw it when I was 8 or 9, and it put a permanent wrinkle in my psyche. It might as well have been a documentary because I was traumatized and genuinely believed there was a little girl in Georgetown about my age who was sexually assaulted with a crucifix by a demon. I’m sure it carved out some kind of neural pathway in my brain that’s at least partly responsible for my chronic lifelong addiction to horror films. Despite being one of the most terrifying films ever made, over the years William Friedkin’s movie has been criticized for its broad characterizations of good and evil, but that doesn’t take away any of its power as a horror film. I’m an atheist, and it still disturbs me. The Exorcist endures because it’s not really about God, or the Devil. And you don’t have to be religious to identify with a single mother’s agonizing struggle to save her daughter from something that’s destroying her and causing her unimaginable pain and suffering. Ask any parent in a cancer ward — they would trade places with their child in a heartbeat if only it were possible. Instead, she is forced to watch her child be violated over and over again. As a last resort, Chris MacNeil — an atheist — is forced to turn to religion for help, and by God, it works. When you really think about it: Amongst all of its notorious, child-raping, anti-Christian antics, The Exorcist is actually a deeply Christian film … but I don’t hold that against it.” 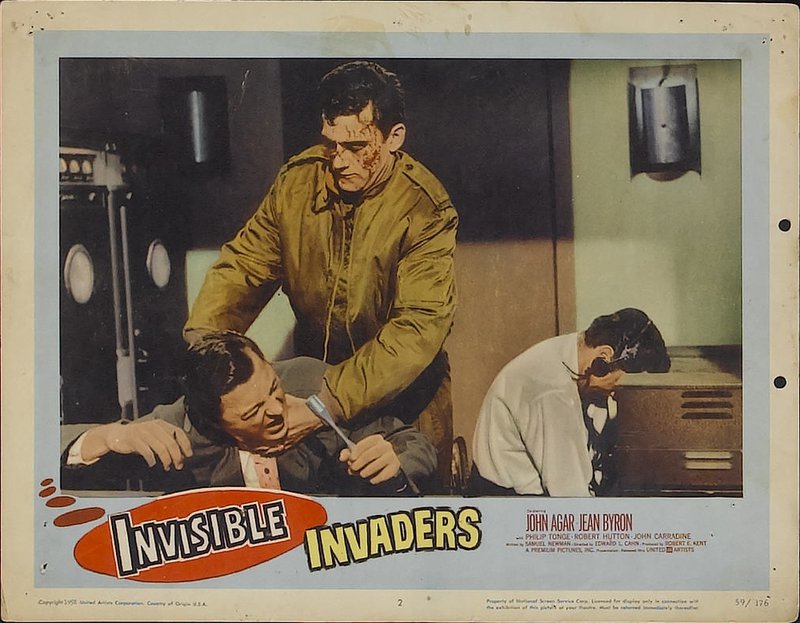 “When I was a small kid, I saw a movie on a weekend Creature Features show called the Invisible Invaders [1958] that scared the shit out of me, and I remember to this day! A decidedly B-movie made in the ’50s, it involved corpses being reanimated on Earth by energy invaders from outer space, and these scientists in a bunker have to figure out how to stop this army of dead people who had aliens inside of them. It was essentially a zombie movie before Romero, and I’m sure he saw it as one of the inspirations for Night of the Living Dead.”

“I was 14 when The Omen [1976] hit theaters. I thought the film was equally terrifying and expansive. I ran home after the movie, flipped through the Bible verifying all I had seen about ‘666,’ and shared it with my bemused parents. The Omen still inspires me with its great acting, directing and mythology. It’s horror cinema at the highest level.”

“My favorite horror movie is writer Quentin Tarantino and director Robert Rodriquez’s From Dusk till Dawn [1996], with the power cast of George Clooney, Harvey Keitel, Danny Trejo, Juliette Lewis and my friends Cheech Marin, Tom Savini and John Saxon. Climax for me was the gory vampire strip joint scene, loaded with sex, violence and Salma Hayek’s endless seduction of Tarantino. That strip joint seduction grabbed me and kept me breathless until the end. I was impacted by that top-talent cast and Tarantino/Rodriguez’s superb storytelling and genre fusion. That worked so well and hit me hard!”

“It was actually a horror film that made me want to make films, and I’ve had an affinity for the genre ever since. The film was James Whale’s Frankenstein [1931]. When I was 5 years old, my mother brought me to the local library where they were showing 16mm clips of classic scenes from the Universal monster movies. The image of Karloff as Frankenstein’s Monster looking through the rotating internal mechanism of the burning windmill emblazoned itself onto my prefrontal cortex. The next morning, I told my mother, ‘I want to make movies’.”