Scarred For Life - These Movies Messed Us Up 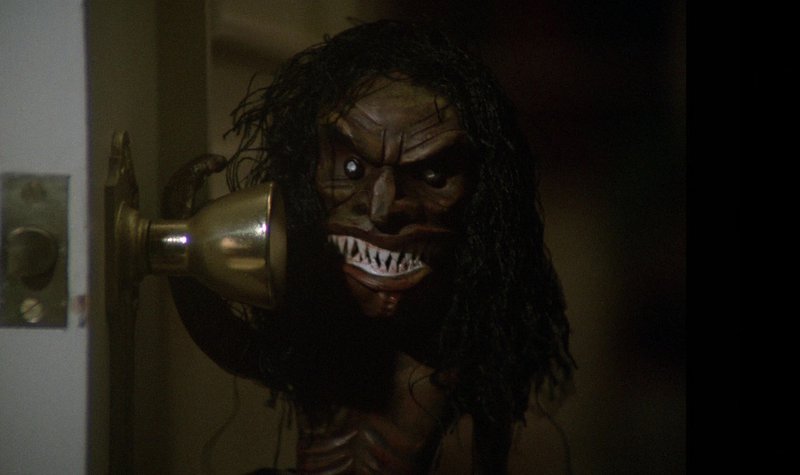 And the scars just keep on coming! FANGORIA opened wounds old and new when we began exploring the fright flicks that impacted the impressionable minds of our favorite genre celebrities. For this edition, we welcome some veteran scream stars (Bruce Campbell!), while also getting some fearful feedback from rising filmmakers and actors whose new horror films open this month – and who hope to have a similar impact on you! 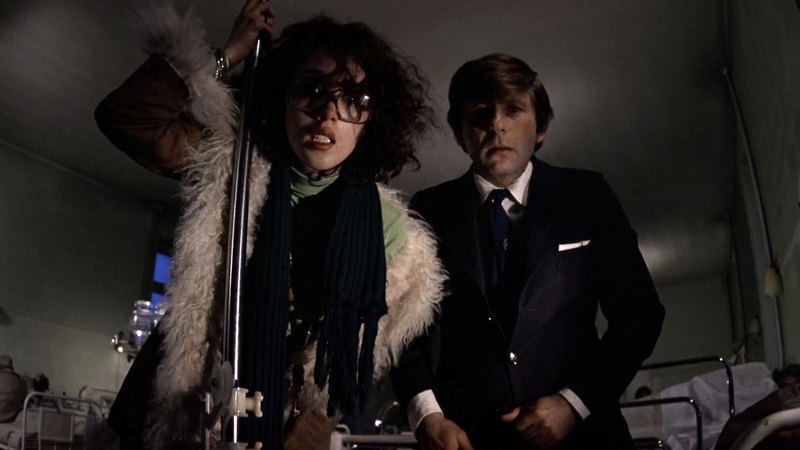 “I saw Roman Polanski’s The Tenant [1976] in college in the mid-’70s, and it was one of the very few horror movies to stay with me for a week or more after seeing it for the first time. The reason it resonated is because, as a filmmaker, Polanski made you feel like you were going insane: no digital effects, no monsters, just great filmmaking.” 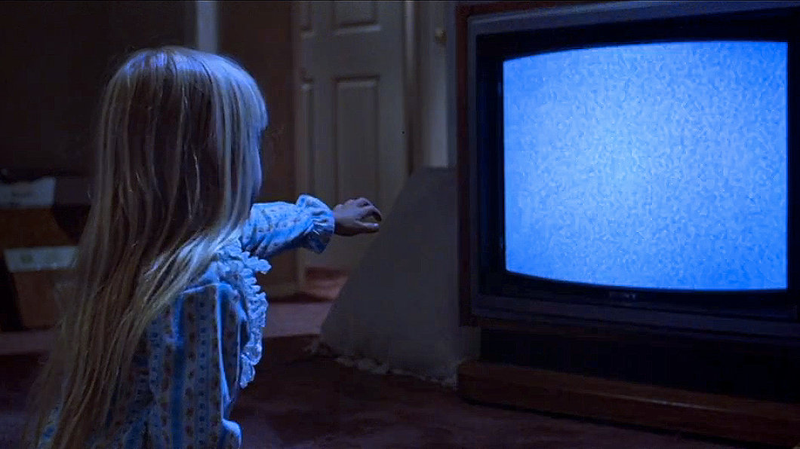 “It would have to be Poltergeist [1982]. I was a totally sweet, fairly innocent 6-year-old boy when it came out that summer, who loved all things Spielberg (Indiana Jones, E.T., Close Encounters). My parents took me to see the film in the theater (clearly not realizing it was actually helmed by the director of Texas Chainsaw Massacre), and I had nightmares for three years afterward. The scene when Marty rips his face off scarred me for life—but nothing was more unsettling than the static on the TV. It still gives me the creeps to this day. For me, that’s the real mark of a great scary movie. Sure, gore can scar a 6-year-old, but if something as unremarkable as static can traumatize a person four decades later, the movie is an undeniable horror classic.” 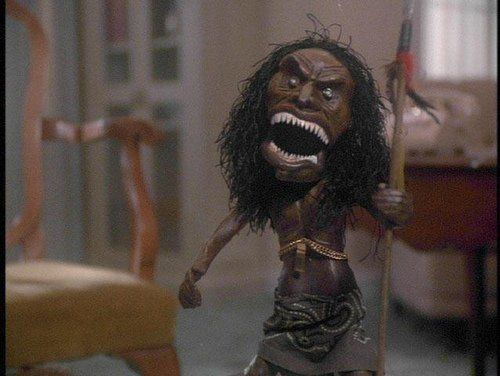 William Brent Bell, director (Brahms: The Boy II, in theaters February 21; The Boy; The Devil Inside)

“When I was 4 years old, my older sister showed me Trilogy of Terror [1975]. I can honestly say I never recovered from the Zuni fetish doll story. I mean, until I was maybe 10 years old, I was convinced the doll lived under the couch in our living room. I wouldn’t let my legs hang down because I truly believed the doll would cut my feet off with a carving knife. This piece still inspires me and embodies so much of what I love about horror.” 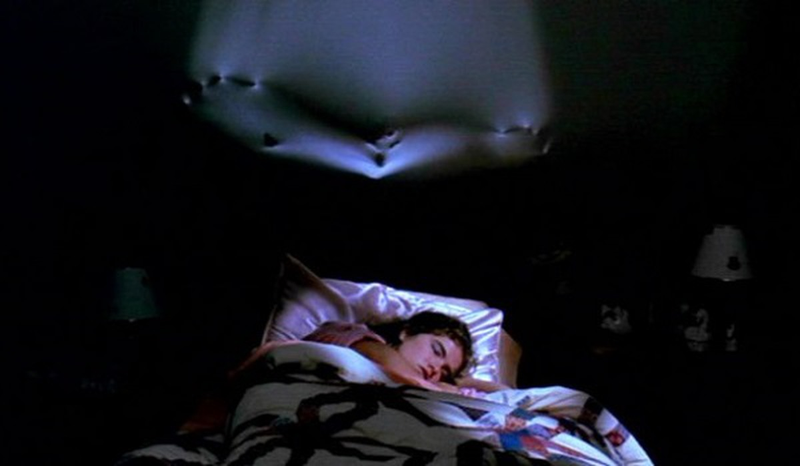 “The film that had the biggest impact is, without a doubt, the original A Nightmare on Elm Street [1984]. I went in as an unsuspecting 14-year-old who honestly wasn’t impressed by the trailers. But the movie scared the hell out of me and remains my favorite movie to this day. There are several reasons it impacted me. With Freddy Krueger, it introduced me to a horror villain unlike any I’d ever seen. I knew Robert Englund as the lovable alien on ‘V’ and now he was the essence of evil. The film cemented my love of horror films, and I voraciously studied how it was made. After reading how Wes Craven pulled off such mind-blowing scenes on no budget, it inspired me to believe I could be a filmmaker. I was also truly inspired by Nancy Thompson, who was brilliantly portrayed by Heather Langenkamp. The Final Girls before her were great at screaming, but they spent most of their time running from the killer, while occasionally stabbing them. Nancy, on the other hand, went from a sweet girl next door to a fierce warrior. When no one believed her, she decided to save herself. She researched. She rigged her house…went into the dreamworld and dragged Freddy out to face him on her turf. She set the bar for what a Final Girl should be.

“Craven put everything into this movie…a film no studio wanted to make until Robert Shaye and New Line Cinema took a chance on it. The story was layered and complex. Everything from the cinematography to the music is still classic. The plot was twisty…hello…I thought Tina (Amanda Wyss) was our lead. A Nightmare on Elm Street clawed its way under my skin and has stayed there. It’s the type of film I aspire to make. And Wes Craven, a master filmmaker, brought all of his passion, skills and imagination to this masterpiece. Personally, the film also got me to contact Bob Shaye, who offered me, at age 19, an internship at New Line Cinema. Years later, New Line made my film, Final Destination. So, the impact of this film on me personally and professionally was profound and everlasting.” 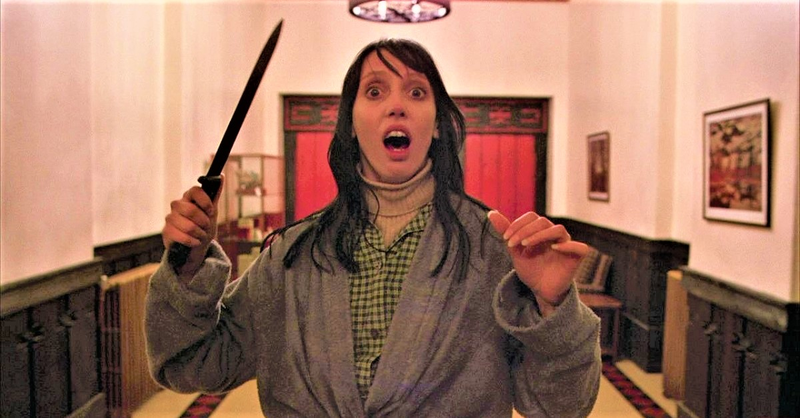 “The horror movie that got me, and also my favorite, is The Shining [1980], by the genius filmmaker Stanley Kubrick. I was spellbound by the eerie energy I felt through the whole film, even way before it became visibly scary on screen. Mr. Kubrick was able to somehow put a feel of uncomfortableness from the first frame to the last. In the film, I was immediately sucked into who the characters were and why they were in their situation. It’s such a rollercoaster, brain twister and suspenseful adventure, involving just enough elements to make it work, that I feel this was, and is, a true masterpiece of filmmaking.” 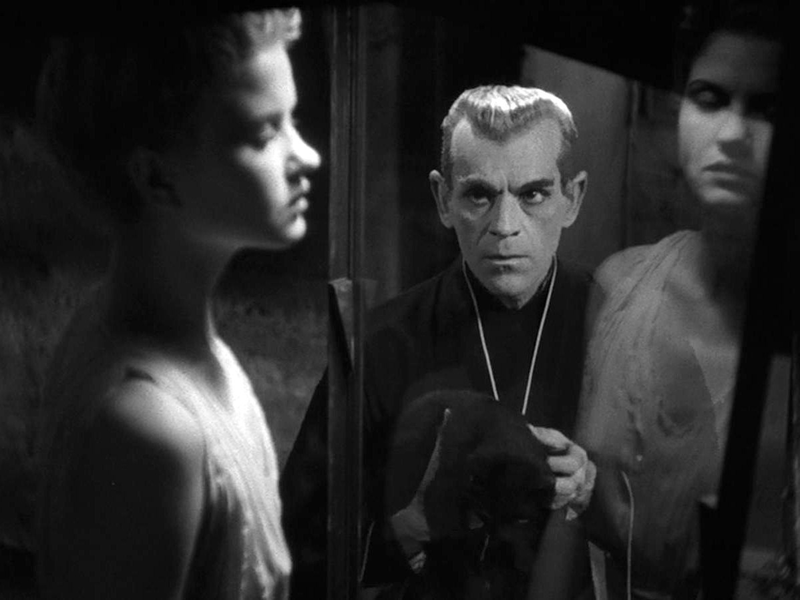 “I first saw The Black Cat [1934] when I was a kid. It made a deep impression on me. I remember thinking it was creepy and unsettling, and there was something not right about it. If you’d asked me then what my favorite horror film was, I probably would have said Creature from the Black Lagoon. But over time, the cinematic power of The Black Cat burrowed its way into my psyche and moved it to the top of my list.

“Corrupt and transgressive is how I would characterize the film that first teamed Boris Karloff and Bela Lugosi. Picking a ‘favorite horror film’ is always a daunting task as there are so many films that I have come to love over the years. The unsettling sensual air of The Black Cat coupled with a storyline that is just plain wrong on so many levels has made me fall in love with it. When asked about The Black Cat, writer/director Edgar Ulmer once said, ‘You should never commit your fetishes to film, it’s just too revealing.’ I should have paid attention [laughs].

“The story begins with Lugosi taking a train to confront an old ‘friend’ (Karloff) in a small town in the Austrian countryside. During the trip, he befriends a young newlywed couple. They all soon wind up at an ultra-modern house perched on a mountaintop constructed by architect/engineer Karloff, who is, by the way, a practicing Satanist.

“We soon find out that Karloff has plans to do away with our young hero and use his new bride as a sacrifice in a ritual. During the course of the film, we see Karloff in bed (yes, in bed…this is pre-code) with an 18-year-old hot blonde babe. We soon discover that Karloff killed Lugosi’s wife years ago in a satanic ritual after she gave birth to Lugosi’s daughter. He then waited for her to grow up and married her. Whew!

“The interplay between Lugosi, Karloff and the young bride and groom is truly harrowing. My favorite line comes when our young hero asks if they can use the phone to get a cab. Karloff’s creepy manservant states, ‘The phone is dead.’ Karloff turns to Lugosi with a slimy stare and says in his most lispy and iconic performance ever, ‘Hear that, Vitus? The phone is dead…even the phone is dead.’ The film culminates in Lugosi hanging Karloff on a torture rack and skinning him alive! What more could you possibly want from a film?”

Can Evrenol, writer/director (Baskin, Housewife, Girl With No Mouth)

“The Blair Witch Project [1999] made me wake up sick with horror in the middle of the night—literally nauseous—and run to my parents’ bedroom at the age of 18! I slept with the lights on for a good couple of weeks. Darkness is the greatest fear for mankind. That movie taps into the fear of darkness, more than just as a movie, but as an art project, as a visual experiment. But it is definitely Tobe Hooper’s Texas Chainsaw Massacre that made me decide to be a filmmaker. It’s low-budget. It’s gritty. It’s arthouse. It’s relentless. It’s demented. And above all, it’s family! It made me find what I want to do in my films: make it all about family.” 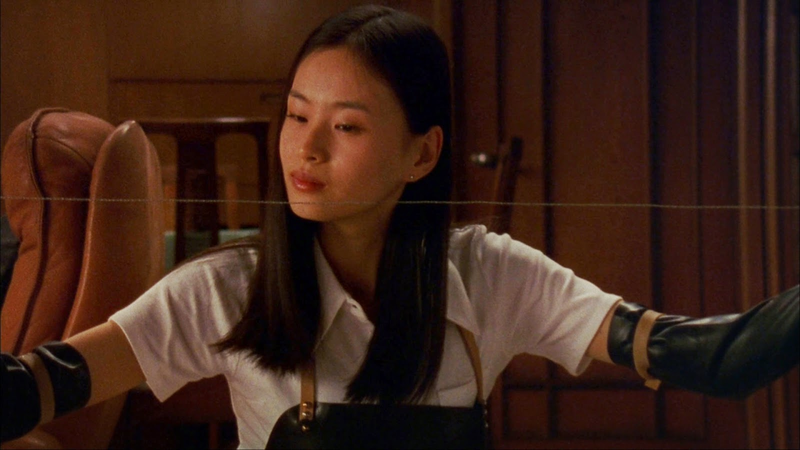 Fred Raskin, editor (Once Upon a Time…in Hollywood, The Hateful Eight, Guardians of the Galaxy, Bone Tomahawk)

“When I was 10 years old, my dad excitedly called for me to come into the den to watch the shower scene from Psycho [1960], a plan which may have backfired. It scared the hell out of me, and it turned me off to horror movies for the next few years (until that fateful day when I worked up the guts to buy FANGORIA #67 from my local comic book store and officially became a freak for the genre).

“But the movie that legitimately scarred me was Takashi Miike’s Audition [1999], which I saw in its original U.S. release in 2000 when I was a wee 26-year-old. The movie so disturbed me that I spent the next week with graphic images of vomit-drinking and piano-wire amputations seared into my brain, and it’s the only movie in my memory that had me legitimately wishing I hadn’t seen it. As time passed, I came to appreciate its power—there’s no doubting the movie’s effectiveness, and Miike displayed an assured directorial hand, especially in how he inserted his wry sense of humor into the grim proceedings. The picture may also be the finest example of genre-switching since the original Psycho; its first half plays out like a romantic comedy until that one scene in which the movie makes it clear that its intentions are far more sinister. I have a clear memory of that first viewing, but despite a multitude of revival screenings over the years, I’ve never revisited the movie. Maybe one day I’ll work up the guts to do so.” 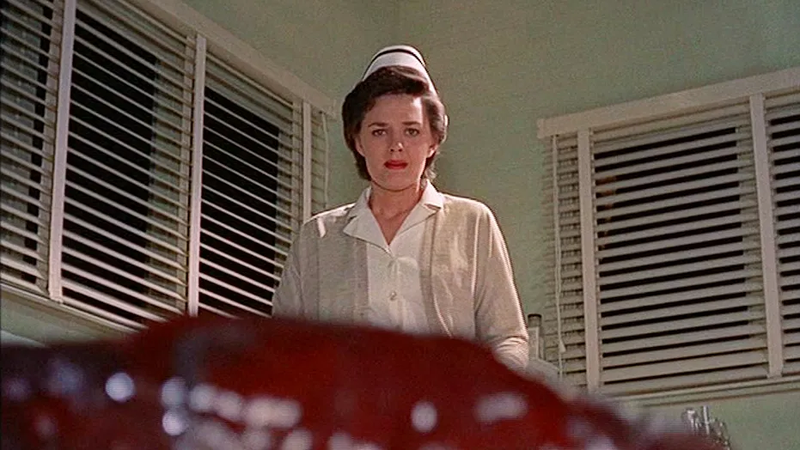 “The first scary horror film that had an effect on me was The Blob [1958], which I saw as a young girl. It just kept coming. It got bigger and bigger and you couldn’t stop it. It’s not like you could just stab or shoot it like a humanoid creature (for example, Frankenstein’s Monster). And the way it oozed under doors creeped me out!” 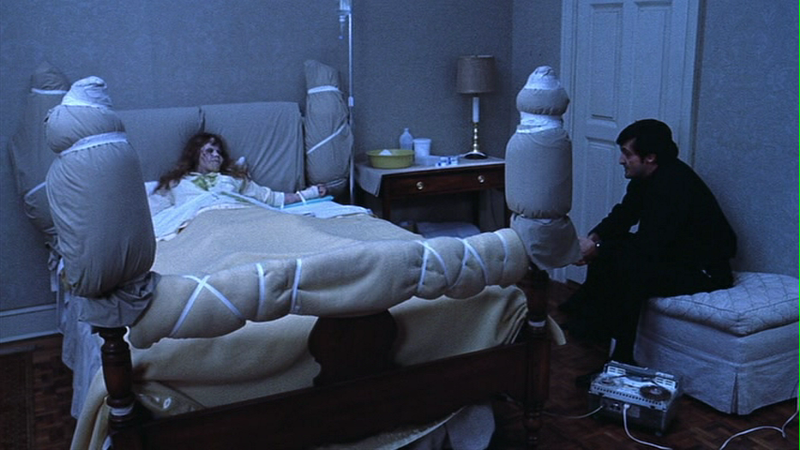 “Although there were many films that influenced my life (for example, the original Planet of the Apes, An American Werewolf in London, etc.) and my consequent decision to enter the field of creature/makeup effects, the film that scared me the most has to be The Exorcist [1973]. I’m sure many will agree with me. Not only were the effects beyond incredible at the time, the subject matter was too real for most people who were raised with some religious beliefs and the possibility of a satanic spirit existing in our world. Plus, the idea of the demonic possession of a young, vulnerable girl put the ‘scary factor’ over the top for me.”