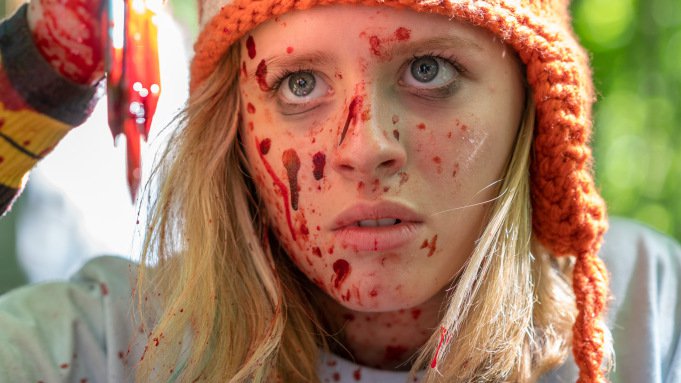 With the COVID nightmare finally ebbing and the country reopening, new horror films are poised to enter the theatrical marketplace. So, for this edition of Scarred for Life, we hit up some of the actors and directors of this month’s promising genre flicks, Becky and Dreamland, to see what non-pandemic frights messed them up. Also chiming in are a few a scary flick standbys!

(Annabelle: Creation, Ouija: Origin of Evil, The Haunting of Hill House and Becky, on Digital and VOD June 5)

“Now, I wouldn’t call it a horror movie, but when I was 5 years old, Edward Scissorhands (1990) scared me more than anything. My parents left me home alone with my oldest sister, and she decided we would watch it. I’ve always loved Tim Burton even when I was that small, so I don’t blame my sister for deciding that was the best way to spend our sister-sister bonding time. Buuuut, it did end up majorly scarring me.

“I don’t remember much about the movie because I was so traumatized that I still haven’t rewatched it, even though it’s been a solid nine years since ‘the incident,’ and I would most likely love it now because of my immunity and infatuation with horror. But I do remember how I watched it. Like any scared 5-year-old, I was so horrified that I couldn’t look away. And I couldn’t stop myself from imagining Edward Scissorhands himself hiding in my closet waiting to pop out and slice me up. When my parents came home, my eyes were still wide, and my little hands were most likely covered in the red and purple splotches that tend to appear when I’m nervous. I ran to the door and grabbed onto my mom’s jacket yelling, ‘Paper Scissor Hands! Paper Scissor Hands!’ because I was so traumatized that I couldn’t even remember the name of the main character, which also happens to be the title of the frickin’ movie.”

(Cooties, Bushwick and Becky, on VOD and Digital HD June 5)

“It’s almost cliché for my generation, but The Shining (1980) rocked my world when I was a kid. I was 10 years old and hanging out with the latchkey bad-kid family on my block, a rowdy group of five brothers and sisters. Back then, watching movies was special and I had never seen a horror movie, so I had no idea what I was getting into. The younger kids all wanted to watch it again, so how bad could it be? They popped in the VHS, and I immediately knew I was in trouble. At that time, I still needed my mom to tuck me in at night and check under the bed. The twin girls standing at the end of the hallway, the blood pouring out of the elevator and the old woman in the bathtub literally melted in my young bewildered mind. I had nightmares and trouble falling asleep for the next eight years. The Shining was far more terrifying than any monster under my bed.”

(Cooties, Bushwick and Becky, on VOD and Digital HD June 5)

“When I think back to my youth, there’s one clear horror movie that rocked my world and that was The Fly (1986). Wow. It gave me nightmares for weeks that I’d wake up and be transformed into a nasty, hairy bug with wings and legs protruding out of holes in my skin. The combination of Jeff Goldblum and David Cronenberg was a match made in heaven. Weirdness layered with weirdness but presented in a way that made it feel like it could actually happen. Lots of other horror movies up until that point never really scared me because I always got hung up on the preposterousness of zombies, monsters or burned serial killers that could kill you in your sleep. But The Fly made me believe that monsters could really exist because science made one. It was smart, grotesque, sexy and scary as hell. And funny! Goldblum gave it that extra bit of humor that triggered every synapse in my young brain.”

“Seeing Night of the Living Dead (1968) for the first time at the Albion Mall Cinema surely rearranged my eighth-grade head. It was a movie both frightening and inspiring for me and my friends. More frightening than other horror movies we’d seen because it appeared more real. There were no movie stars in it. The lead was an African American dude. The movie was in black and white. It appeared to have been just barely captured on film, without any styled-up processing by professionals. So, in all those same ways, director George Romero inspired us in a mammoth way. Living outside the gates of Hollywood, his movie gave us the belief that we, too, could make movies. I salute you, Mr. Romero.”

(Pontypool, Come to Daddy, A History of Violence, Mother! and Dreamland, in theaters, on VOD and Digital HD June 5)

“The first movie that shook me to my bones was the 1963 Zapruder footage [of JFK’s assassination]. Low-budget, primitive, but powerful in its effect. A brief glimpse of pure evil. And then the ‘sequel,’ with an awareness that it had been edited away from its documentary truth made you want to watch it over and over and over. By ‘sequel,’ I mean seeing the movie from a completely different viewpoint after learning that the original had been secretly edited to fit the one-bullet theory. Still sickens me to think about it.”

“The one that got me was Terror in the Wax Museum (1973). I saw it when I was 10 years old in a theater. It was a bad House of Wax rip-off with a great cast — Elsa Lanchester, John Carradine, Ray Milland, Maurice Evans, Broderick Crawford — but the moment when the Jack the Ripper ‘wax’ figure appears to come to life with a knife in his hand, I had nightmares for weeks.”

Who could pass up a chance to put Fraggles on Fango? Thank you, Mike Flanagan. You're a gift.

“For me, it was the Fraggle Rock episode ‘The Terrible Tunnel’ (1983). I mean it completely destroyed me. The souls of dead Fraggles were trapped in this tunnel and if you went in, you’d never come out. I had nightmares for years and didn’t realize just how completely it had burrowed into my brain until after I’d finished making Absentia.”

“Definitely Jaws (1975). I saw Jaws when I was in fourth grade, and I was probably too young. My mother [actress Rosemary Harris of Sam Raimi’s Spider-Man trilogy] and I were staying in a motel in La Junta, Colorado, where she was working. And Jaws came on the television, and we ended up just huddled, clutching each other in the middle of the bed, just too terrified to even put our feet on the floor. And we could not be farther from an ocean in the United States of America. That was definitely the most lasting scar from a horror film.”

“Nightmare on Elm Street 3: Dream Warriors (1987) was banned in our home state of Queensland, Australia. Which, of course, made it essential that we track it down and watch it as soon as possible. Eventually, through some dark VHS dealings, we obtained a copy. And, boy, did it not disappoint… complete with wrist-slitting vein puppetry, Freddy’s needle fingers, sexy nurses, scary nuns, fighting skeletons and the great Patricia Arquette. It had everything two impressionable pre-teen boys were looking for. It’s still one of our favorites.”

“The one ‘horror’ film that made the most impression on me is Bride of Frankenstein (1935). Mostly because it was so richly textured, with several storylines and developed characters. I always found the prototypical ‘slasher films’ focused on gore and light on story and character, perhaps because I compared them to that classic film. I believe you can have it all—fear, ‘gore’ and character and story.”