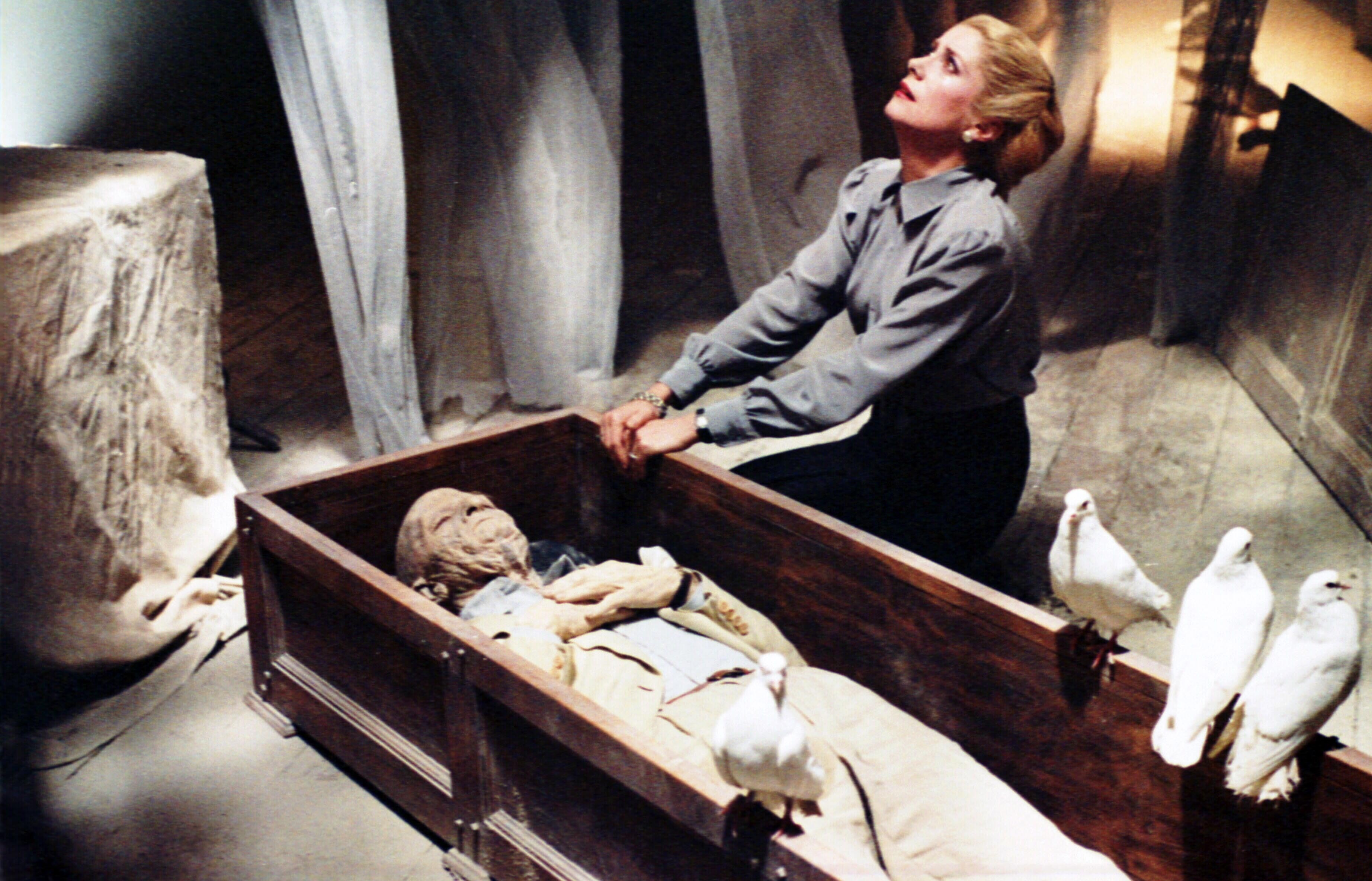 Catherine Deneuve tends to David Bowie in "The Hunger." (Metro-Goldwyn-Mayer/MovieStillsDB)

hree months into self-quarantine and with movie theaters remaining shuttered, there is still an unlimited supply of horror films and TV shows to binge at home. Today’s Scarred for Life celebrity contributors look beyond the post-Scream boom and plethora of modern-age genre choices to unveil the frights from the 1940s-1980s that continue to haunt them.

“Somehow, I ended up at a double feature of Cat People [1982] and The Hunger [1983] when I was a kid. Both films were super scary, but with great music. From a child’s point of view, what left the deepest impression were the cats and the music in that first film. And never being able to go to sleep without first checking for a panther under the bed. The Hunger, too, was the music and this eerie sense of sophisticated danger.

“Later, when I worked with [director] Tony Scott [on Man on Fire], I watched The Hunger again and, out of curiosity, Cat People. I realized how sexy these films were. And stylish. Sexy, scary and stylish… no wonder they stayed in my unconscious!”

(Insidious trilogy, Penny Dreadful: City of Angels, The Grudge, Snakes on a Plane and Dreamkatcher, now on VOD and DVD)

“The Night of the Hunter [1955], starring Robert Mitchum, Shelley Winters and Lillian Gish. Directed by the great Charles Laughton. Mitchum, as The Preacher, with L-O-V-E tattooed on the fingers of his right hand, and H-A-T-E tattooed on the fingers of his left. Stalking ‘the children,’ crooning an old spiritual, ‘Leaning,’ in his baritone, haunting voice, Mitchum was, for me, one of the most terrifying killers in film history. There is a scene with him sitting in the audience watching a stripper, where he has not a word of dialogue, that to this day still haunts me! There is a rumor of a remake, and I want to play the Lillian Gish role! There! I said it… Let it be!”

(Gretel & Hansel, I Am the Pretty Thing That Lives in the House, The Blackcoat’s Daughter)

“My father used to get sent copies of FANGORIA every once in a while, and one of them made its way somehow to our summer house in the woods on Cape Cod. It must have been something like 1983. This particular issue — I feel like the cover showed a human face with the skin peeled off of it, the taut and glistening purple-pink musculature under the cheeks, the bared gums and teeth — had in it a photograph of Linda Blair in full Regan makeup [from The Exorcist, 1973]; the image was black and white and couldn’t have been larger than a baseball card turned sideways, and so I neatly separated it — first the entire page at the staples, and then even more neatly and dutifully from the page on which it was positioned. I decided it would really be best to keep this secret image at the bottom of an old chest full of toys and board games, deep at the bottom, underneath everything, stifled, so that only I could know where it was, and so only I could visit and revisit it whenever I wanted. I don’t know if I dug to the bottom of the chest to review the image three times or 300 times over the course of that summer, but I do know that probably nothing else in my early years more fundamentally influenced my feelings about horror movies and their private powers, their hidden energies, their muffled romanticisms.”

“In the summer of 1948 as a young horror comic-book fan, I influenced my father to take me to see Abbott and Costello Meet Frankenstein at the classic Shadowland Theatre in Ellenville, New York. (That upstate theater seemed a little weird to me and still exists in Ellenville!)

“When my dad and I entered the dark auditorium, we were greeted by the design of bones of skeletons on the screen as the film’s main titles came on. The movie featured, in addition to the comic leads, Count Dracula, the Frankenstein Monster and the Wolf Man. For a kid who had never seen such characters before, Abbott and Costello Meet Frankenstein really scared me and I would both think about and dream about that film for many years to come. My own project, 1971’s Dracula vs. Frankenstein [being rereleased in national drive-ins beginning May 26], no doubt had some of the influences from that film, which was the last of the 1940s classic Universal horror films of that era. Many similarities can be drawn from that film to mine, which is considered by some to also be a horror-comedy.”

(My Friend Dahmer, We Summon the Darkness)

“Jaws [1975]. No other movie comes to mind as frequently. I don’t drive through a desert and think of The Hills Have Eyes, nor do I even think of Room 237 every time I go to a large hotel. But every time I jump in the ocean, I think about sharks and then for just a second, I think about Jaws.”

(Carnival of Souls, The Curse of the Living Corpse)

“In The Omen [1976], the scene where Gregory Peck, my favorite actor, was chased by Rottweilers in the graveyard late at night made me afraid of these dogs forever. However, put aside the dogs, the child, Damien, was a horror. People died excruciating deaths when they learned his heritage. At times, I couldn’t watch the screen because of the evil Damien’s followers were committing. His father learns that he is truly the Antichrist. Years later, when I met Gregory Peck, he told me that his career had been in a slump until he did this horror film. The Omen was a great success. Maybe it was the script or maybe it was because the movie had exceptional actors like Lee Remick and Gregory Peck.”

“I’m sorry to say, I’m not a fan of horror films. I hate being scared. I find life itself can be terrifying enough, plus I believe I’m much too sensitive. My family makes fun of me because I’m such a baby. I’m the first to scream and usually, I’m hiding under the covers or have my face buried behind my daughter or husband.

“In reflection, The Twilight Zone [1959-1964] was my first introduction to sci-fi and horror. I was about 9 at the time. In the episode ‘To Serve Man,’ aliens come to Earth with a book we believe to be their bible. After expressing their love and support of humanity, they talk us into visiting their planet, and as the humans begin to board their spacecraft, we discover that their book To Serve Man is actually a cookbook. Scared the shit out of me! First just thinking about the idea of aliens was a new concept, and then the idea that someone would want to eat us like we eat beef… very frightening!”

“Alfred Hitchcock’s Psycho [1960] definitely psyched me out — I was f***ing 11 years old or something. I had always been into horror, subscribed to Forrest Ackerman’s Famous Monsters. But in terms of viewing, it meant the old Bela Lugosi, Boris Karloff classics on TV. Seeing Psycho in a theater took things to a new level of horror. Every time my wife dons her gray wig and attacks me in the shower with a knife, it still freaks me out!”

(Scary Stories to Tell in the Dark, The Autopsy of Jane Doe, Trollhunter, Mortal)

“When I grew up, the horror movie that affected me the most was Poltergeist [1982]. The tension in every scene, and the overall build of dread, the shocking horror moments, the familiar setting, the human-character humor, the Spielbergian mix of horror and awe, all the spooky single images — it showed me what horror could be, how complex and human it could be, despite ‘just’ being a supernatural yarn, and it became the perfect gateway horror movie, setting the bar for me in my own professional career.”

(Nightmare Cinema, Beyond Skyline, The Wretched)

“My father, Bruce Mahler, played Dr. Axel Burns in Friday the 13th: The Final Chapter [1984] and was permitted to keep his head cast after the shoot. So, although I didn’t see the movie as a child and wasn’t frightened by the viewing of it directly, it still managed to impose a particularly traumatizing childhood experience when I found my father’s ‘severed head’ in the spare room!

“My early exposure to horror films, which also included The Howling and Poltergeist, seems to have served as a blessing in disguise. I’ve grown to love the genre, am incredibly grateful for the numerous acting opportunities I’ve had, and even find myself incorporating these influences into my music career. I’m currently working on a dark cinematic pop album (second to my original debut, Ophidian) and look forward to sharing it with all my fellow horror fans.”

‍Tony Timpone served as FANGORIA editor-in-chief from 1987-2010 before managing the company’s Video on Demand and DVD divisions. As a co-host/producer, Timpone worked on FANGORIA RADIO for SiriusXM Satellite Radio for four years. In the 1990s, he helped guide the first three FANGORIA feature films to the screen: Mindwarp, Children of the Night and Severed Ties. In 2004, Timpone served as associate producer to Bravo’s 100 Scariest Movie Moments and was a producer on the syndicated 1990s special, The Horror Hall of Fame. For 2018’s 7-part cable documentary series AMC Visionaries: Eli Roth's History of Horror, Timpone worked as a writer and researcher and a commentator. Timpone has been a frequent media spokesman for the horror industry, making appearances on more than 100 TV and radio shows, DVD supplements and documentaries.