Rediscovering 'Mr. Goodbar': The Horror-Drama More Relevant Now Than It Was In 1977 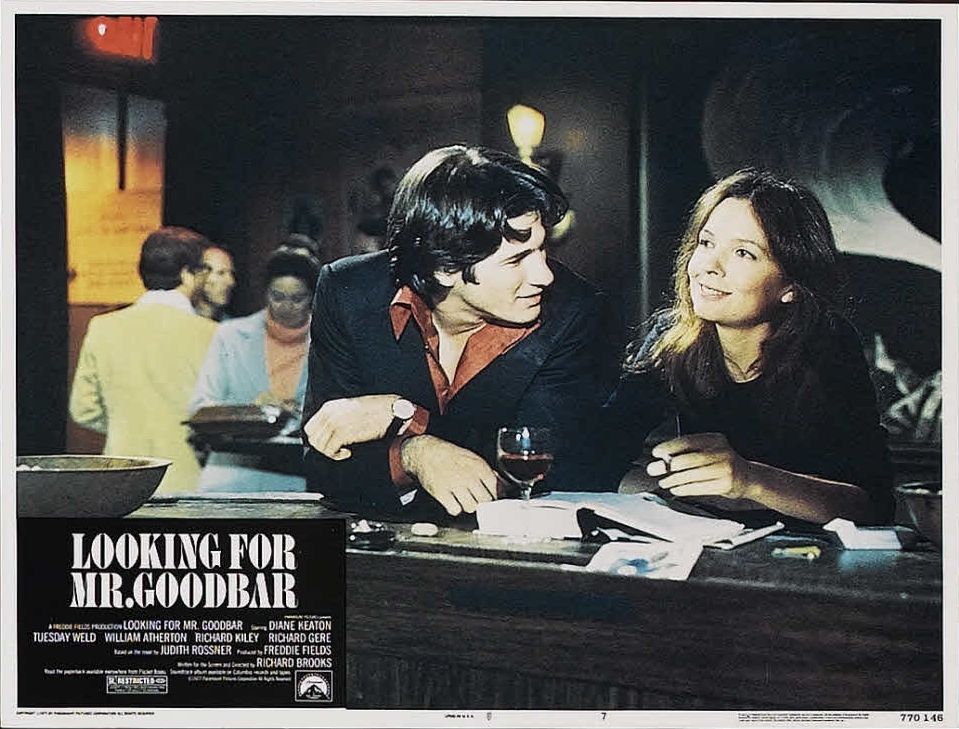 Rediscovering 'Mr. Goodbar': The Horror-Drama More Relevant Now Than It Was In 1977

ometimes, it’s amazing how prescient a film made decades ago can be about the modern era. Take the first Lethal Weapon, for example. About halfway through the film, detectives Riggs and Murtaugh interview a group of inner-city children who witnessed Gary Busey’s hitman character planting a bomb that killed a potential witness. The children — who are all either black or mixed race — are reticent to talk to the men; when pressed to explain why they don’t want to help catch a bad guy, one of them says earnestly, “My mom says cops shoot black people.” It’s a bit of gallows humor in the film, but it’s also a serious comment on a serious issue that’s still being addressed in the modern age. Strangely enough, that moment made me think of another film that’s just as relevant today as when it came out over 40 years ago: Looking for Mr. Goodbar.

If it were released today, there’s a good chance Goodbar would be marketed as a horror film, or at least as the sort of psychological thriller that’s uncomfortable calling itself a horror film because of its own pretentions towards artistry.The film concerns Theresa Dunn (Diane Keaton), a young Irish-American woman coming of age during the swinging ‘60s. Raised in a strict Catholic home, she watches as her older sister dives headlong into the sexual revolution, initially swinging with her husband before embarking on a self-destructive journey of self-discovery that involves drugs, clandestine abortions, and multiple affairs. Theresa, meanwhile, struggles with her own sense of identity: She was born with a severe form of scoliosis that required drastic corrective surgery, leaving her with a scar on her back she believes is both disfiguring and makes her sexually unviable. Further complicating her psychological baggage is the knowledge that her scoliosis was congenital, and that the last woman in her family to suffer from it — a distant aunt — committed suicide because of it.

Against her expectations, Theresa finds romance almost as soon as she leaves home for the first time when she comes under the attention of one of her college professors, an older, scholarly Jewish man named Martin whose ethnoreligious exoticism appeals to her sheltered Catholic “good girl” sensibilities. Though she thinks the relationship will last past graduation, Martin has different ideas about their future, and soon Theresa is on her own again, hurt and confused by the trajectory of her first romance. It’s a dynamic that will set the template for all of Theresa’s future relationships: Even as she excels in her professional life, becoming a well-respected teacher of deaf children, her personal life rapidly deteriorates. Hanging out at a dive bar on the recommendation of her older sister, Theresa meets and beds a variety of increasingly dangerous men, including a sexy but possibly psychotic hood named Tony (Richard Gere) who’s a little too friendly with his switchblade and a little too quick to solve arguments with his fists; and James, a spooky civil servant whose good-Irish-lad veneer hides a Lifetime-movie husband waiting to come out. As Theresa struggles to attain some kind of emotional stability — or,indeed, to figure out exactly what “emotional stability” even means to her — the film becomes a mordant countdown to tragedy. At a certain point, the question doesn’t become whether Theresa is going to die at the hands of one of her hookups, it becomes a question of when, and how gruesome it’ll be.

If nothing that came before it solidifies Goodbar’s status as a horror film, then the final 15 minutes will change the minds of all but the most elitist genre snobs, as the movie — and Theresa’s story — takes a hard-left turn into slasher territory, with director Richard Brooks employing some of the ‘70s’ subtlest — yet most effective — visual effects to terrify the audience while also beautifully symbolizing Theresa’s final descent into the literal and figurative abyss. Further solidifying its pedigree is that the film is based on a true murder case that rocked Manhattan in the early 1970s,when prim, polite schoolteacher Roseann Quinn was found stabbed to death in her apartment, exposing her double-life as a party girl with a predilection for picking up unstable men for one-night stands. Even before the movie goes all blood-and-strobe-lights, though, it drips with an existential dread, one that’s hammered home to the audience through trippy dream sequences and psychedelic imagery. Throughout it all, Brooks’ oversaturation of whites and gauzy lighting give the film the look and feel of a dream that vacillates between unsettling and all-out nightmare. What’s existentially disturbing about the film, though, isn’t just the journey that Theresa takes, but how topical it is to today’s environment.

Though Theresa utilizes neighborhood dive bars and friends of friends to find her hookups, Goodbar could just as easily be set against the backdrop of 2010s Tinder culture. None of Theresa’s fears, insecurities, or anxieties have been allayed by the march of time. Her issues with body image, society’s insistence on conflating sex with love, and the promise of emotional fulfillment in immediate gratification are all as part of the fabric of life as a young person in 2018 as they were in 1977, if not more so. While the film subtly points out that Theresa’s scar is only really disfiguring to her, it’s the sort of thing that contemporary Snapchat/Instagram/Tinder trolls would tear apart. Tony has as his spiritual successor the myriad “Alpha men” of society who feel that their physical or economic achievements entitle them to women’s bodies anytime, anywhere they please. Meanwhile, James is the prototypical nice guy, a conscientious, “woke” ally who turns on Theresa the moment she rebuffs him. It’s a sobering thought that, for all of the “freedoms” the sexual revolution supposedly gave to society, young women in 2019 are still in the same place they were in 1977: struggling to reclaim their own sexuality while trying not to become victims of the men who see that very sexuality as their right. For audiences going into Goodbar in 1977, Theresa’s ultimate fate was a shock; for audiences sitting down to Goodbar in 2019 — especially women — what happens to Theresa isn’t a surprise: It’s almost a given.

Another way that Goodbar has aged well is in its unusually complex handling of human sexuality. One of the stunning things Goodbar manages to accomplish is that it’s a horror movie that’s sex-positive while not being completely naïve. Too many films that want to be morality tales only look at the negative outcome of sexual liberation; conversely, too many movies that aim to paint a healthy picture of sex go in the opposite direction and treat hookups as responsibility-free playdates with no potentially negative consequences. Goodbar, amazingly for a film made in the sleazy ‘70s, walks a fine tightrope. At no point does it ever damn Theresa for having a libido; rather, the condemnation comes from Theresa’s insistence on looking for fulfillment with all the wrong people, and on those people for exploiting Theresa. Though the movie appears to superficially paint with the broad strokes of “all men are like this,” Theresa does have opportunities to end up with decent guys. LeVar Burton, most notably, turns up as the older brother of one of Theresa’s students, a physically fit, handsome, and charismatic guy who’s also socially responsible and not a complete piece of trash. Theresa is simply so crippled by a society that tells her that her value is wrapped up in her body — and then chastising her body for not living up to an impossible standard — that she can only find excitement and fulfillment in the worst possible people.

Tellingly, Mr. Goodbar only received a limited DVD release before going out of print, with discs — and even VHS copies — now going for upwards of $90 on Amazon. Despite being a brief cultural touchstone when it debuted — Diane Keaton won a Golden Globe for her performance, while co-star Tuesday Weld was nominated for an Academy Award for Best Supporting Actress — it quickly sank into obscurity at the outset of the Reagan ‘80s, where family values reigned supreme and sex was something awesome that only happened between married couples and attractive teenagers. It’s a shame — in addition to its many other virtues, the picture is technically adept, and Keaton turns in one of the best performances of her career, to say nothing of Gere and Burton, both of whom shine despite their relative newcomer status (this was Burton’s first cinematic feature following the success of Roots, while it was Gere’s first starring role). While rights issues to the film’s myriad disco tracks are surely a part of the holdup, other pictures have gotten around that snag with generic or less expensive music; it’s hard not to think the mordant tone,complex message, and uncomfortable dialogue it attempts to start with the audience have all played a part in keeping it out of print. If there’s one horror movie that needs to be discovered by the Millennial generation, this is it.

Preston Fassel is an award-winning author and journalist whose work has appeared in FANGORIA, Rue Morgue Magazine, Screem Magazine, and on Cinedump.com. He is the author of "Remembering Vanessa," the first published biography of British horror star Vanessa Howard, printed in the Spring 2014 issue of Screem Magazine. From 2015 to 2017, he served as the assistant editor of Cinedump.com. Since 2017, he has served as staff writer for FANGORIA magazine. His first novel, 'Our Lady of the Inferno,' was the recipient of the Independent Publisher Book Award for Horror and was named one of Bloody Disgusting's 10 Best Horror Books of 2018. Twitter: @PrestonFassel