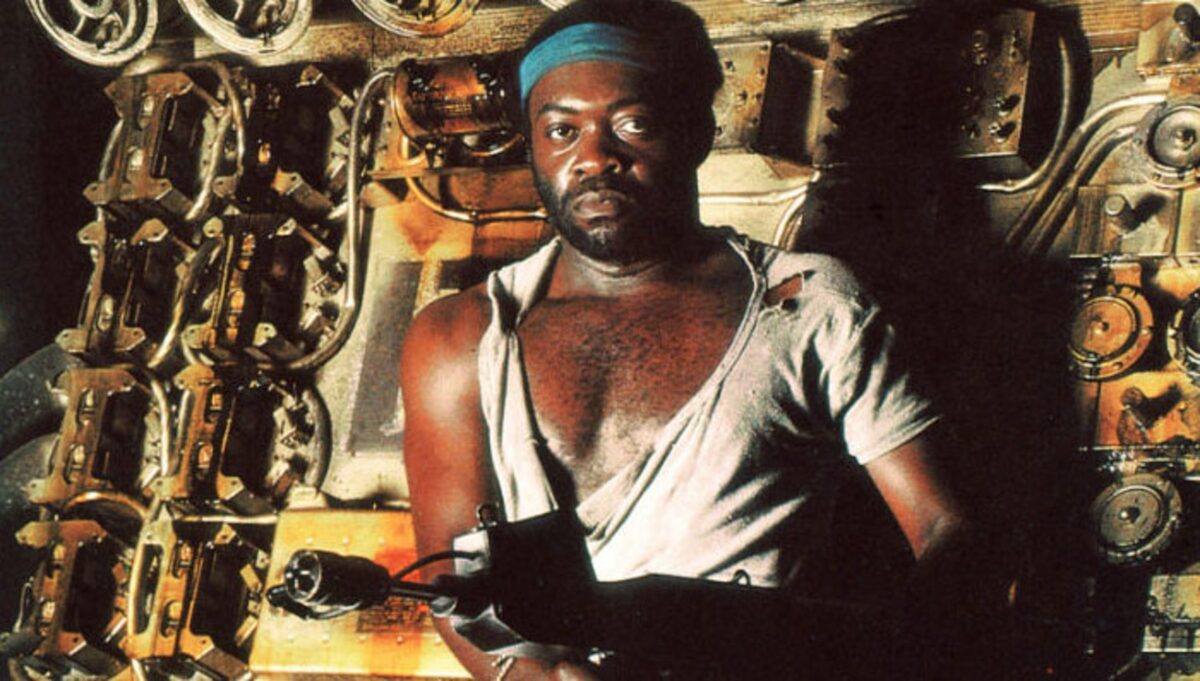 "Can we just talk about the bonus situation?"

The chief engineer of the U.S.C.S.S. Nostromo, Dennis Monroe Parker, is a practical man. He does a job, he gets paid. He'll do what engineers are wired to do: look at a problem, find a solution, and tell you exactly what can and can't be done. As we celebrate the 40th anniversary of Ridley Scott's slasher in space Alien, a tip of the hat is due to the film's most blue-collar avatar. Played with zeal by Homicide veteran and former Bond baddie Yaphet Kotto, Chief Engineer Parker is a working-class hero who doesn't have time for your nonsense.

The now-iconic classic goes as follows: a ship traveling through interstellar space intercepts a transmission of unknown origin. The ship's A.I. computer, Mother, pulls her passengers out of stasis and they find that their course has been altered. Despite their job description entailing transports and not much more, the doomed crew of redshirts-- Captain Dallas, Executive Officer Kane, Warrant Officer Ripley, Navigator Lambert, Science Officer Ash, and two engineers, Parker and Brett -- is contractually obligated by their employer (Weyland-Yutani, a.k.a. "the Company") to check the beacon signal out. As Parker and Brett repair the ship, Dallas, Kane, and Lambert venture onto the planetoid LV-426 to locate the signal's source. Kane finds some eggs and is attacked by a creature lurking inside. No one listens to Ripley's insistence on following quarantine protocol and so Typhoid Kane is brought on board along with a stowaway attached to him. After that, it's man vs. beast within the hull of Mother's craft.

Roger Ebert, in his 2003 write-up of Alien, recognizes the characters as a deviation from their Star Wars and Close Encounters of the Third Kind contemporaries. "These are not adventurers," he writes, "but workers hired by a company to return 20 million tons of ore to Earth." Dan O'Bannon's screenplay further distinguishes each crew member from the next. Laborers Brett (Harry Dean Stanton) and Parker (Kotto) are often staged at odds with their superior officers; they clearly and repeatedly identify their vessel as a cargo ship. They give immediate static: Parker pushes to get his “fair share", any kind of salary reimbursement for the extra work he is now expected to provide. Whether he meant to or not, Ridley Scott draws a pretty bleak line from present to future, suggesting that American capitalist ideology won't change. Considering rise-and-grind hustle culture now, and the pervasive idea that being "on" at all times is an aspirational lifestyle, the Blade Runner director wasn't far off.

Ever the extension of audience realization, Parker is often relegated to stating the obvious. Yaphet Kotto was 42 at the time of filming, fitting in with a uniquely older cast than usual (Veronica Cartwright was the youngest, a mere 29). The average age among them reflects the experience of their characters; no greenhorns, all veterans of their profession. Upon seeing that the facehugger bleeds acidic fluid, he quips, "It's got a wonderful defense mechanism. You don't dare kill it." When Dallas discusses options for blowing the Xenomorph out of the airlock, Parker reminds us of its sheer size. With his wide-eyed declaration, "It's a robot! Ash is a goddamn robot!" Kotto cemented Parker's role as the film's Greek chorus, reminding the audience of the score and the stakes.

For the first half of the film, the stakes are purely monetary for the engineer. Whenever discussing the next step for the team, all talks lead back to his bottom line. If the crew is to do anything outside of their contract, Parker insists, the paycheck ought to reflect adequate compensation. Upon learning of a distress signal that prompted the Nostromo to redirect course, it becomes clear that the Company expects the crew to investigate the signal's origin. Parker objects, singing the common "not my purview" battle cry. "I hate to bring this up but this a commercial ship, not a rescue ship...and it's not in my contract to do this kind of duty. Now what about the money? If you wanna give me some money to do it, I'll be happy to, you know, oblige."

Unfortunately there is an android among the crew, with an intimate, memorized knowledge of the regulations and contractual obligations of every person on board the ship. Ash (Ian Holm), an authentic jerk-off in a synthetic body, gently reminds everyone of a clause which specifically states that any transmission indicating a possible intelligent origin has to be investigated.

Parker's response: "I don't wanna hear it," he grins, "I want to go home and party."

It's only when the captain threatens the loss of Parker's precious shares that he agrees to investigate the transmission without further fuss. He consistently pushes back against the leadership of Dallas and then Ripley, not because he's rude, but because he knows what every contractor, freelancer, and 9-to-5 day worker knows: the Company can and will screw you over just as badly as any extraterrestrial predator, all in the name of their own bottom line. As the story progresses, Ripley discovers Mother's directive to Ash, Special Order 937:

Insure return of organism for analysis.

All other considerations secondary.

In Scott's universe, humans don't matter nearly as much as the preservation of a gooey specimen in a corporation's eyes. It's something explored in depth in the film's sequel Aliens, with Company representative Burke (Paul Reiser) taking Ash's "Crew expendable" prerogative to the extreme and securing his place in film history as a first-ballot Hall of Fame jabroni.

It's almost incongruous to see a film, a medium from an industry borne of and dependent upon the mechanics of capitalism, whisper resistance against the same (whispers that would become shouts once James Cameron gets his hands on the Nostromo seven years later). But it's a critique that science fiction offers in spades now; the devaluation of humanity in favor of scientific advancements. "Crew expendable." Sigourney Weaver's Ripley offers a direct rebuttal:

Parker: If they find what they're lookin' for out there, that mean we get full shares?

And so he did; Parker took a Xenomorph tongue to the face. Over a mere handful of frames, the alien protrusion stabs through Parker's forehead and spilling the contents (pig brains, according to fx artist Nick Allder). His final words reflected his practicality: a shout for Lambert to "get out of the room" so he could torch the beast. Earlier versions of Scott's storyboards have Parker impaled by the creature, held up as a shield to take the full brunt of Lambert's flamethrower before she herself is taken. It certainly would have been less chilling than the mock-meditative position Ripley later finds his body in. Regardless, Ridley Scott's final cut makes the call to portray the chief engineer as a real deal Holyfield hero. In an effort to save his crewmate, the titan goes toe-to-toe with Ash's "perfect specimen" and goes out like a champ.

At a 2003 TIFF Dialogue, Kotto spoke on what the movie meant to him. After being greeted by Japanese schoolchildren chanting "Alien!" at him during a visit to Washington D.C. years prior, the actor had realized that he had achieved the dream: he was a worldwide star. Not only had the movie opened doors for women in powerful sci-fi roles, but "it was the first time an African-American had been seen in a role like that." That borderline-mercenary role is a far cry from the bright-eyed optimism of its ‘70s sci-fi counterparts. 40 years after Parker succumbed to a tag team of alien evolution and techno-corporate supremacy, Yaphet Kotto's chief engineer remains a cynical symbol for the common person trying to pay their bills amid subjugation in increasingly advanced times.

Anya Stanley is a lifelong horror fan and writer whose work has been seen at BIRTH.MOVIES.DEATH., Collider, Dread Central, Vague Visages, Diabolique Magazine, and F This Movie!. She’s also contributed in print to Rue Morgue and Britain’s Suspiria Magazine, and has appeared on such podcasts as Certified Forgotten, the /Filmcast, and SPLATHOUSE. Follow her staunch defenses of Halloween 6 and other shenanigans on Twitter and Instagram.