Even a genius has to take a paycheck now and again. 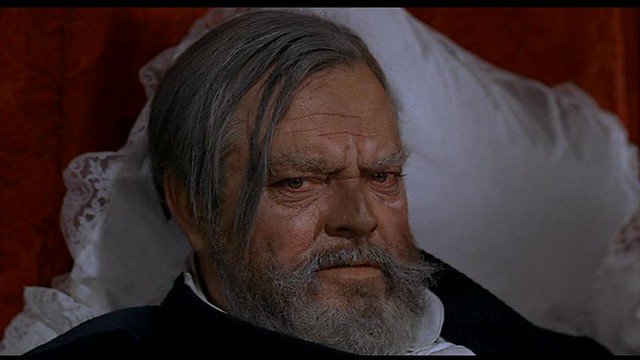 Orson Welles’s strange, storied career took him on a crooked path that straddled the line between fame and infamy. A theater wunderkind turned Hollywood enfant terrible, Welles eventually became an industry pariah, leading him to scores of mercenary work, which explains how the director of Citizen Kane ended his career providing the voice of Optimus Prime in a Transformers movie he described as featuring “some terrible robot toys from Japan.” It comes as no surprise that this mercenary phase occasionally led Welles to the horror genre, most notably in a trio of late-career productions.

Welles had crossed paths in the genre earlier: there’s the famous (but largely embellished) tale where his radio broadcast of War of the Worlds sparked a hysteria in misinformed listeners mistaking it for an actual Martian invasion. Xanadu’s fog-shrouded introduction in Citizen Kane feels like the stuff of an Old Dark House picture, while his gothic-laced Macbeth best captures the supernatural undertones of the Bard’s bewitching tragedy. And while he couldn’t have known it at the time, he may have been partially responsible for giving the genre one of its most enduring figures in Vincent Price, whose stage career began with Welles’s Mercury Theater troupe. 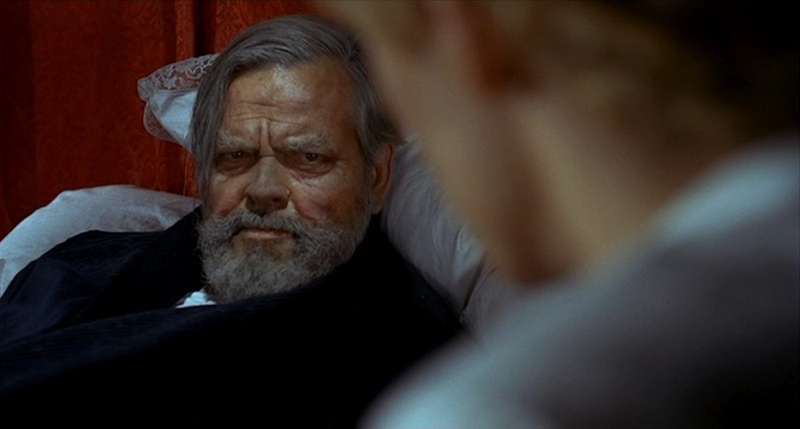 However, his first proper horror outing for our purposes came in 1971’s Malpertuis, Harry Kümel's dreamy follow-up to Daughters of Darkness. A long-time fan of Welles, Kümel reportedly found the right price to secure his participation (a common refrain when it comes to these acting gigs) for what amounted to a cushy role. Welles spends the entirety of his screen-time in bed as Cassavius, the cantankerous lord of Malpertuis, a cavernous estate that’s seen better days. He's summoned friends, family, and acquaintances to deliver his will in a sequence that also doubles as a roast when he airs his grievances about everyone. Welles hangs around for about 40 minutes, his face buried in makeup he insisted upon and his voice dubbed over in Dutch, hissing orders with a bellicosity that reportedly extended to his co-stars when cameras weren’t rolling. (Though Kümel has noted that Welles was eventually contrite and continued to assist with the picture after his contracted shooting days were over.)

While Welles is the draw here, his character’s death is the inciting incident in this deliberately-paced Old Dark House riff. Before the old man bequeaths his estate, he insists that everyone present at Malpertuis must remain in perpetuity, with the last survivor inheriting everything. Cassavius’s favorite nephew Jan (Mathieu Carrière) grows restless at the insinuation that something otherworldly haunts the mansion. Kümel teases several possibilities, sending Jan and the audience on a dizzying journey through spiral staircases and labyrinthine passageways. Mad science, occultism, murder, and the existential despair of entrapment lurk within the walls, none of them exactly foreshadowing the climax’s wild twists and turns. They must have sent contemporary audiences for a loop since Malpertuis was hacked up for American distribution and rebranded The Legend of Doom House, a generic title that belies how singularly odd Kümel's film is. Come for cranky Orson Welles, but stick around for the head-scratching – but imaginative – resolution here. 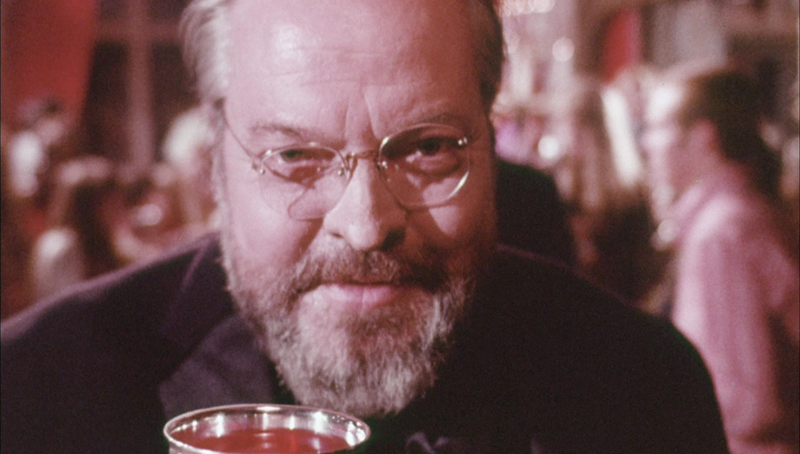 A year later, Welles would appear in Necromancy, a loopy occult freak-out from Bert I. Gordon, a director best known for the oversized creature features that earned him the nickname “Mr. B.I.G.” Here, Gordon conjured fellow Kenosha native Welles to play Mr. Cato, an enigmatic, occultist toymaker who lords over the entire Northern California town of Lillith (one wonders if he ever exchanged notes with Halloween III’s Conal Cochran). Still grieving the loss of a son he insists isn’t actually dead, he summons childless couples to the town and inducts them into his coven in the hopes that he’ll harness the powers of necromancy to resurrect his child. Lori and Frank Brandon (Pamela Franklin & Michael Ontkean) are the latest arrivals, though the former is immediately suspicious of the place, rightly noting that Lillith is often associated with deception and witchery.

Welles gets top billing, but Franklin is the actual star of Necromancy, appearing in nearly every scene as Lori staggers through a bizarre conspiracy involving fiery car crashes, voodoo dolls, and fleeting visions of a ghostly child wandering through this supposedly childless community. Welles proves to be a sinister foil, appearing vaguely Satanic with a devilish goatee and a bizarre, oversized nose appliance. If he seems zoned out, it’s only because everyone else is: Necromancy is one of those hazy dream logic movies, where the incoherency takes on a suffocating quality, submerging the audience in the jagged rhythms of a nightmarish cacophony that crescendos with Welles presiding over a black mass, surrounded by goat heads and hooded occultists.

If not for its familiar faces, Necromancy would exactly resemble those regional oddities that flourished at drive-ins during this era. Welles especially brings a whiff of legitimacy that those productions rarely had, though, even if he was once again simply “chasing money” according to biographer Josh Karp. Franklin hasn’t pained the rosiest picture of her co-star, either: in her interview on the film’s Blu-ray release, she makes it clear that she didn’t think much of him or his dismissive attitude toward the cast and crew. Like Malpertuis, Necromancy also contended with a compromised release, particularly on home video, where it became The Witching, a recut version boasting a different score and additional scenes of witchcraft until Code Red DVD restored the original version in 2016. 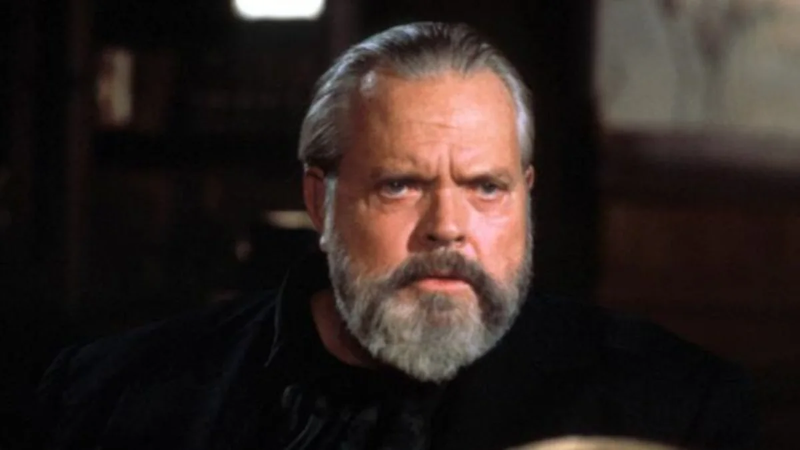 Welles would later lend his voice to an episode of Night Gallery and Peter Collinson’s And Then There Were None, but he wouldn’t resurface on-screen for a horror project until 1981’s The Man Who Saw Tomorrow. A cursory glance at this docudrama about the life and predictions of Michel de Nostradamus might lead you to insist it's not a horror movie. Don’t say that to anyone who had the misfortune of stumbling onto this unlikely cable staple at an impressionable age and watched in terror as Welles narrated the prophet’s doomsday scenarios. Even the stuff not dealing with the apocalypse is fairly bone-chilling, as Welles’s gravelly voice gives a sinister tenor to Nostradamus’s alleged predictions about Napoleon, Lincoln, Hitler, and the Kennedys. The Hitler segment is particularly unsettling because director Robert Guenette utilizes actual footage and grisly images of the Holocaust, giving The Man Who Saw Tomorrow a tasteless, exploitative vibe that reveals the true aim of this documentary is to disturb rather than simply inform.

Never is that clearer than during its final 30 minutes, when Welles explores those quatrains that supposedly foretell natural disasters, famine and plagues that will reduce civilization to a cannibal wasteland. And that’s just the prelude to the truly horrifying sequence, which dramatizes the start of World War III, complete with a “King of Terror” wearing a blue turban launching nuclear missiles on New York City. Never mind that Welles’s ominous predictions that some of these events might occur in 1986 or 1988 should have seemed silly by the time I saw this in the '90s. There was no comfort to be had when confronting images of a miniature-scaled New York being blasted into oblivion, a vision of the future that still seemed frighteningly real in the shadow of the Gulf War and other Middle East turmoil. Even the promise of a millennium of peace following this Third World War didn’t offer much solace, not when The Man Who Saw Tomorrow ends on Welles solemnly informing audiences that the world will end in the year 3797.

Welles offers an on-screen disclaimer during the film, insisting that none of these predictions are the views of himself or the producers but instead that of experts and scholars. But that, too, offers little comfort since Welles is in full cigar-chomping huckster mode here, hosting The Man Who Saw Tomorrow with a campy theatricality that hints he was at least having a little bit of fun terrifying his audience. For most kids growing up, Welles was Lew Lord, the kindly executive who offers Kermit a “standard rich and famous contract” at the end of The Muppet Movie; for me, he was a harbinger of doom, his playfully menacing voice ushering some of the most frightening images I’d ever seen flash across a TV screen.

Obviously, The Man Who Saw Tomorrow is a far cry from Welles’s glory days, but it fittingly brought his career full circle. Just as he had convinced some listeners that the end was nigh with that infamous War of the Worlds broadcast, here he found another way to traumatize an entirely new generation with portents of death and destruction, a distinction often reserved for canonized horror maestros. So, say it with me: Orson Welles, Master of Horror – if the price is right, of course.