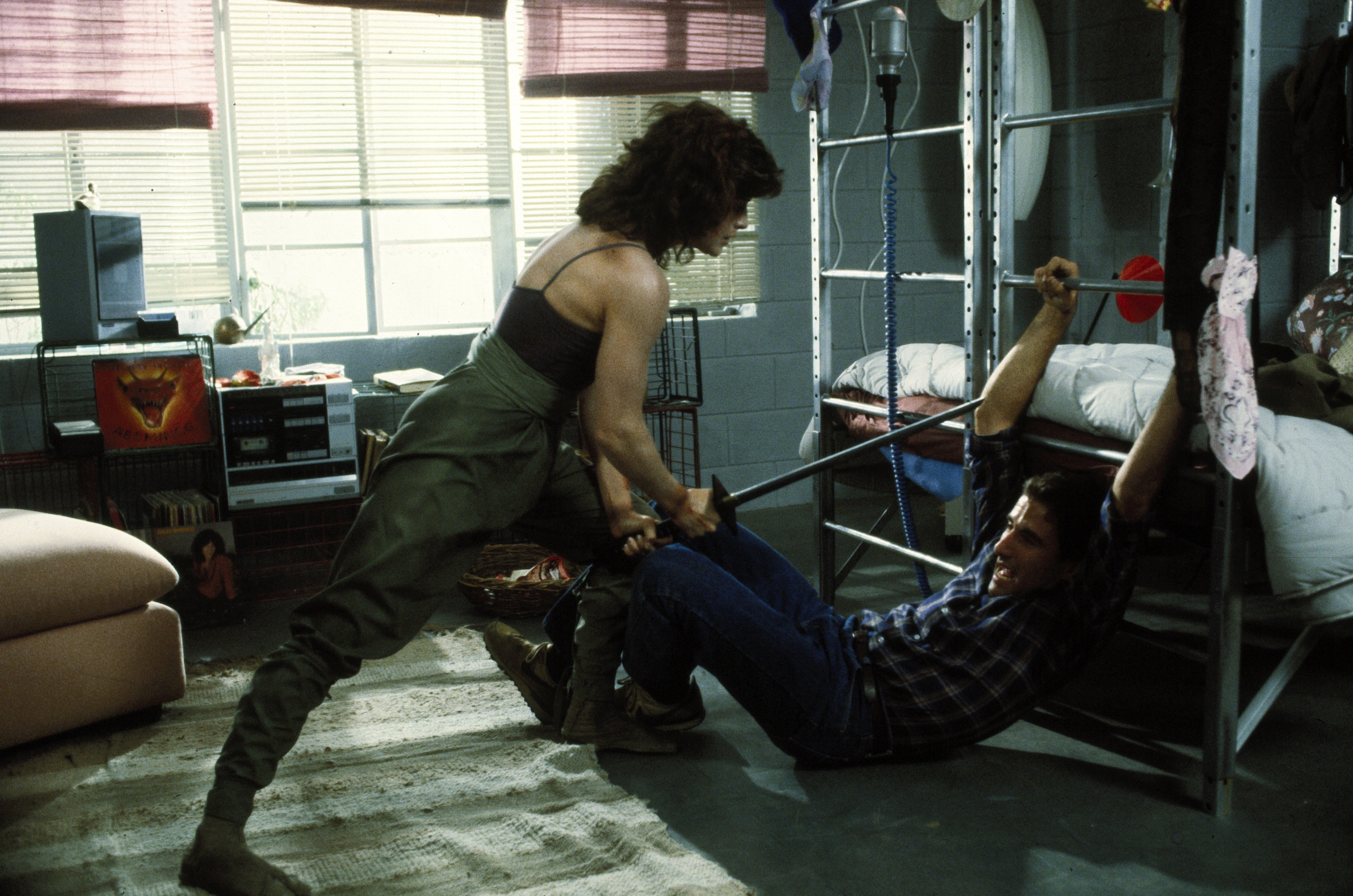 f there has been one benefit to the quarantine, it’s that it has allowed me to finally start powering through a stack of “just for fun” DVDs that have been sitting on my bookshelf for months now — movies I have accumulated at conventions, as freebies, or been given as gifts, but which I just haven’t found the time to watch. To kick off the great Coronavirius Binge of 2020, I chose one that I had been wanting to dive into for a while, which I found last fall at a Dollar Tree: The Electric Boogaloo, a documentary on the rise and fall of Cannon Films. It’s an amazing movie that proved well worth the wait and provides a great oral history of the company and its bonkers product from the people who were there. There’s not much to say about the movie itself — it’s solid fun, but the bulk of the film is just clips of Cannon movies interspersed with talking-head segments about the company’s trajectory. One of those clips served to hit a real nostalgia sweet spot for me, though, and got me thinking about one of my favorite guilty pleasures: Ninja III: The Domination.

Ninja III is a movie of bold ambition and an even bolder commitment not to realize the insanity of that ambition. While Cannon was never shy about cribbing from other studios or crassly exploiting the biggest trend of the day — this is how we got stuff like 1983’s Hercules with Lou Ferrigno following the success of 1982’s Conan, or The Last American Virgin, which found producers Menahem Golan and Yoram Globus remaking their own film — Ninja III represents something unique. It’s an attempt not only to cash in on the success of Flashdance, but also the early ‘80s horror boom and the karate craze that Cannon itself helped kick-off with 1981’s Enter the Ninja. The result is a film of a singular audacity — and a cult oddity that must be seen to be believed. ‍

Ninja III gets right down to business, with what may be one of the strangest and most gleefully insane opening sequences in exploitation movie history: apropos of nothing, a dude in full ninja regalia attacks and kills some preppy-looking guy on a golf course. Although a throwaway line later in the movie will tell us that the preppy was a scientist, we never learn his true identity or why a mysterious cabal of ninjas wanted him dead. In a way, it doesn’t even matter; what does matter is that said scientist’s death unleashes an all-out brawl on the golf course, as seemingly endless waves of guys with guns open fire on the ninja in a desperate bid to kill him. For the next 10 minutes — which are virtually dialogue-free — the ninja absolutely massacres attacker after attacker in an unhinged sequence that plays more like the “five-star wanted level” point of a Grand Theft Auto game than a narrative motion picture. Rarely in the history of cinema has one ninja killed so many guys in such quick succession, even as their armaments expand from handguns to submachine guns to helicopters, all of which our antagonist dispatches with ease while apparently suffering few to no injuries himself. Eventually, though, the ninja is surrounded by a cadre of the most ‘80s cops ever to appear outside a Chippendales show, and they blow him to bits in a denouement that is hilariously anticlimactic in its low-key execution when compared to everything that has come before.

We still have an entire movie left, though, so of course, this isn’t the end for our seemingly indestructible antihero. Improbably, the ninja manages to crawl away from the site of his demise, ultimately coming across telephone company lineman by day/dance instructor by night Christie (Lucinda Dickey). As he dies, the ninja possesses Christie, imbuing her with his demonic life force. This kicks off Ninja III’s plot proper (if it can be said to have one), as the ninja begins periodically taking over Christie’s body to hunt and kill the cops who fired the fatal shots — including Christie’s new beau, Officer Billy Secord (Jordan Bennett), a skeevy patrolman who is two parts protein shake and one part aspiring sex criminal (in what almost serves as a lampoon of ‘80s movies’ predilection for girls fawning over guys who have clearly got abusive tendencies, as Billy becomes more possessive, controlling and creepy, Christie falls increasingly under his sway). As Christie’s behavior becomes more erratic — she expresses a heretofore unknown interest in Japanese culture and in one of the film’s iconic moments, she decides she needs to incorporate V8 juice into her lovemaking — Billy realizes that something is wrong and that he’ll need the services of another ninja to perform a proper exorcism.

‍Ninja III is a movie that patently does not care if it makes sense, is good or even functions as a structural narrative; it’s there, you’re watching it, and that’s all that matters. What’s so beautiful is that the disparate parts all come together to make something more than their sum; while Ninja III is patently not a good movie, it is filled with great moments and great touches: Christie is blatantly Alex from Flashdance, from the blue collar-by-day, dancer-by-night background to the improbably posh apartment (Christie’s is so ‘80s it includes both Nagel art and an arcade machine); the random introduction of the hero ninja, whose backstory unfolds in a totally contextless scene involving the loss of an eye that’s also supposed to serve as a backstory for the villainous ninja; and, perhaps best of all, Christie’s attempt to perform an exorcism on herself through the power of dance. That’s right: Only Ninja III is brave enough to feature an attempted jazzercism.

To say more about Ninja III would be to spoil the fun of experiencing it for yourself. Speaking of spoilers — technically, there is no Ninja or Ninja II. Ninja III forms the third entry in a very loosely linked anthology series that begins with Enter the Ninja and continues with Revenge of the Ninja. The three films’ only connection is their subject matter and the presence of Sho Kosugi, who plays different characters in each film. Scream Factory did God’s work back in 2018 and restored and reissued the movie on Blu-ray, so check it out now for yourself and have a fun, mindless evening. With the world in its current state, it can be fun to turn your brain off for an hour-and-a-half and watch something that doesn’t challenge anything except your credulity.