Crafting a musical soundscape for the dark and dangerous world of noir.

Nathan Johnson is a composer whose work in the film industry began with the award-winning 2005 neo-noir thriller Brick—directed by his cousin Rian Johnson. 2022 will see him returning as the composer for his cousin's much-anticipated sequel to 2019's critically acclaimed whodunnit, Knives Out. However, his latest work finds him teaming up with cinematic visionary Guillermo del Toro and once again crafting a musical soundscape for the dark and dangerous world of noir.

Johnson sat down with Scored to Death author J. Blake Fichera to discuss his score for del Toro's new crime thriller, Nightmare Alley (2021), and what it's like working with the auteur filmmaker.

How did you come to work on Nightmare Alley? Did you know Guillermo del Toro beforehand?

I didn't know him beforehand. He liked what I had done in Knives Out. I think they took some of the Knives Out music and tried it in different scenes as temp [temporary score]. He told me that when they were trying to temp the movie, working with different temp scores, the movie just kept expelling and rejecting music. And he said that when they started putting in some of the pieces that I had done for Knives Out, the movie just kind of pulled them in.

With technology these days, the variety of sounds you can use is infinite. So how did you decide what sounds and instruments you wanted to use for this score?

It came out of character. In Western narrative, it's usually all about character arc. The character starts here and then goes through this big experience, and they end up a different person from when they started. What fascinated me was, it seemed to me that Guillermo was telling a story about a character who doesn't change. That was so impactful to me, and I felt like he—Stan [played by Bradley Cooper]—just kept hitting that same note throughout the movie. He puts on different masks at different times and is convincing people that he's someone else, but when we finally strip everything away, in the end, he is the same person. And he comes to a realization and a final acceptance of who he has, essentially, been from birth. So, in my first conversation with Guillermo, I pitched this idea: We start with a single piano note, and it's the first thing we hear. Then we slowly start adding other notes alongside that, and some are very dissonant [sound unpleasant], some are consonant [sound pleasant]. As we move into the carnival, we expand the palette. Then as we move into the big city and more masks come on, suddenly we're in this big, lush string orchestra with woodwinds and brass. But underneath it, that same piano note is always there. And then, at the end of the movie, we strip everything away. And the last note you hear is the very first note we heard in the score. So, from that level, it was almost like an architectural approach to the score in response to what these characters were doing. 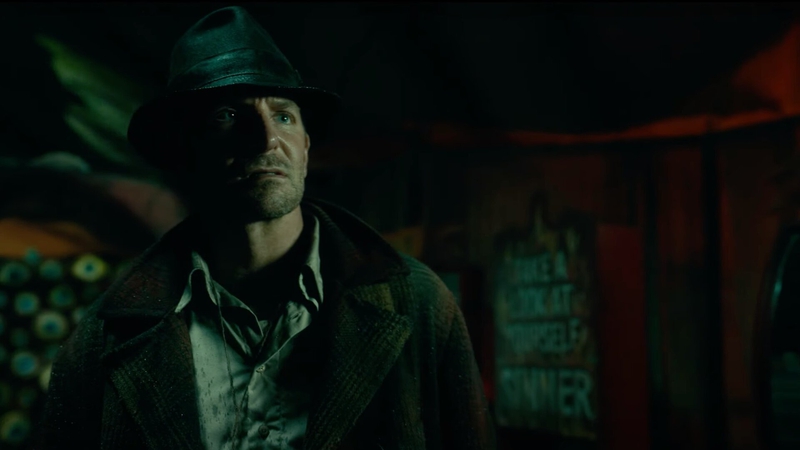 The score has a fair-sized orchestra, and when you listen to it separately, away from the film, some parts feel very lush and big, but when I watched the film, it was surprising to me how subtle the score felt within the movie—and very strategic. It feels very carefully placed. How did you and Guillermo decide on music placement?

We were both really conscious of starting sparsely—especially in the carnival. The movie felt like it didn't want a lot of music in the carnival, and I felt like pushing towards this bold approach in letting certain scenes play dry. And Guillermo was right on board with that. For instance, the first time we see the geek pit at the beginning of the movie, we pulled back completely there. For me, it was important to let that happen viscerally and not color that in any way. Just let the audience sit with this event that sort of gets inside of Stan and haunts him throughout the movie.

Then, again, it was sort of this architectural approach where we moved into the big city—especially with the introduction of the Lilith character [played by Cate Blanchett]. We're introducing these wide-open, unsettling harmonies underneath her melodic oboe motif. It's all about unsettling, and that was really important to us. We didn't want to hold the audience's hand and land them in a particular positive or negative emotion. A lot of the score is doing this dance where it's leaning back and forth between beautiful and ugly. And we're just not landing on one side or the other. And then we get to the climax of the movie, and it's basically 15 minutes straight of music until we get to the campfire scene, and then the last sequence of the movie plays completely dry. With Guillermo, it is all very intentional. We're trying different things, but ultimately, it's about letting the characters and the storytelling take the forefront.

As a director, how does Guillermo communicate what he needs or wants for the film to you?

It's really beautiful. He would come over to my studio every week, and we would work together. I'd show him what I was working on, and then we would fine-tune and dial things in. He has this element that I find in the best directors, which is that he very much knows, from a big-picture-direction, where we're going, and it feels like we're all making the same movie. But in terms of details, he's not micromanaging. At the very beginning, he kept saying to me, "I trust your instincts, and I want you to do your thing. And I almost don't want to tell you too much." And I think part of that is a desire to be surprised and excited. But then, we would dial things in together. So, it did feel very collaborative. I remember when he left the first day, it was like, "Oh, that was so much fun!"

Also, Guillermo's notes are almost always based on the story. For instance, I had been playing around with a celesta [a piano-type instrument that uses hammers that strike metal plates to make sound instead of strings] for one cue. And, Guillermo said, "For this movie, no celesta, because that makes me feel magic, and there's no magic in this world. These are hucksters." That type of note is a 'story note' that completely aligns with the movie we're making and is completely understandable. And those types of notes are a gift because they always are recentering us on the story we're telling, and the story really is the God that we're serving.

Even though many of the films you have worked on deal with dark subject matter and moods, you have yet to score a horror film. Since this interview is for FANGORIA, I need to ask, are you a horror fan, and are you interested in scoring a horror film?

Great question. My brother always gives me a hard time because, in my mind, I feel like horror scares me. I feel like I don't like horror movies. My brother always says, "You think you don't like horror, but what you actually don't like is the previews for teenage scare movies—like jump-scare horror. [laughs] But, when I think about all of these movies that I love, everything from The Shining (1980) to Cabin in the Woods (2011), my brother's like, "No, you love all these great horror movies!" So, I have this perception that horror scares me, except I love these dark psychological movies. So maybe I'm already operating in that playground. Maybe next time we talk, I will find that I've done an actual genre horror movie, and we can talk about that. [laughs]

I would love that.